Trastevere: From a violent, fiery past to Rome’s giant souvenir stand


I live across the Tiber River from a tourist trap.

Walk into Rome’s Trastevere neighborhood and it feels like a Rome theme park. It has all the narrow, twisting, cobblestone alleys that are scattered around the city but the historic charm dating back to Ancient Rome is lost in the plethora of tourists, rollicking bars and drunk students. I see Romanians serenading tourists at tables with butchered renditions of “Il Sole Mio” and fat American college kids stumbling arm in arm to the next birreria. In July, you hear as much English as Italian. Foot traffic is more crowded than the traffic jams on Rome’s ring road.

It wasn’t so long ago when Trastevere was one of the most charming, interesting neighborhoods in Europe. I was lucky to wander through in 1978 during my year abroad after college graduation. In the ‘70s, Italy was plagued by social unrest. The communist Red Brigades clashed with fascists and the government. I arrived in Rome shortly after they kidnapped and murdered Aldo Moro, twice a prime minister who wanted to include the communists in the government for the first time. The Red Brigades wanted nothing to do with Moro or compromise.


On my train ride from Rome to Milan, fascists blew up the tracks near Bologna and we all got herded onto another train. I stood in a packed corridor for nine hours. The Italians, curiously, didn’t say a word in protest. It was just life in Italy in the ‘70s.

It was a decade of revolution, of philosophy, of radicalism. Trastevere was Rome’s magnet for writers, communists, artists, activists, musicians. It reminded me of San Francisco in the ‘60s. I remember, at 22 years old, sitting in the scruffy Bar San Calisto drinking dirt cheap beer on a hot summer night talking to Italian hippies about their fight against fascism. They made up for their limited English with screams and hand gestures.

Last week I learned a lot about Trastevere’s history going way past the ‘70s. It goes back to before the birth of Christ, to the height of the Roman Empire. Back then Trastevere was a neighborhood of slaves, violence and graft. I went with Rome Explorers, a wonderful, learned Meetup group dedicated to the history and nature of Rome and beyond. Leading the group again was Massimiliano “Max” Francia (guideromax@virgilio.it, http://tourguides.viator.com/tour-guide-massimiliano-+-co-rome-tours-68732.aspx), Rome’s ubur guide whose library of Roman history could fill the Colosseum. 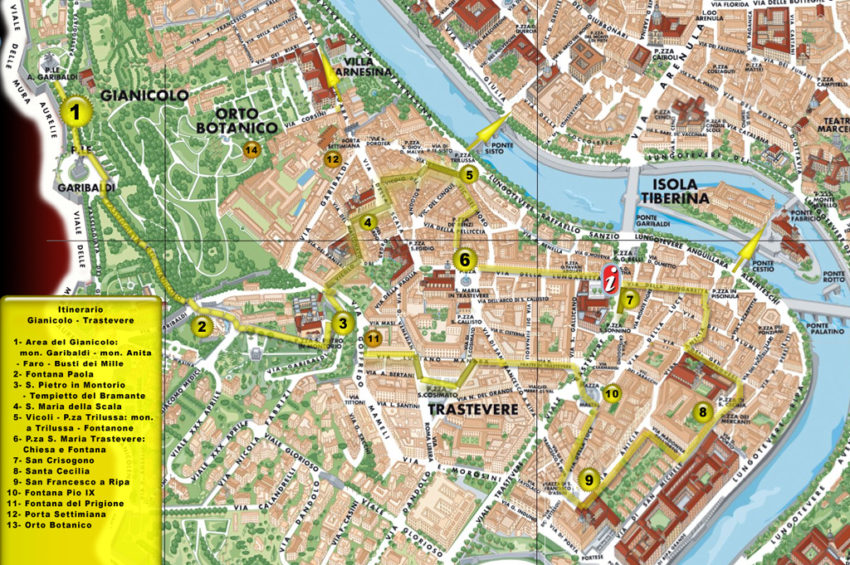 “Trastevere” is short for “attraverso il Tevere” (across the Tiber). It is across the river from Centro Storico which was the nerve center of Ancient Rome and the Roman Empire. About eight of us met Max on boat-shaped Tiberina Island, the longest continually inhabited island in the world and only 900 feet long and 220 feet wide. In the middle of the Tiber between Trastevere and Centro Storico, it dates back to the 3rd century BC when a plague hit Rome and the city built the Temple of Aesculapius, the Greek god of medicine and healing. Today, symbolizing the island’s history of caring for the sick, is the grandiose Ospedale Fatebenefratelli.

We crossed the very short Ponte Cestio bridge onto Lungotevere, the busy boulevard that snakes along the length of Trastevere. Lungo il Tevere, the summer-long outdoor festival with temporary restaurant outlets and shops lining the river, pulsed with humanity. Lungotevere was jammed with people coming and going to and from Trastevere’s alleys and piazzas.

As people from all over the world filed past, Max held court about Trastevere’s early days. During Ancient Rome, this city had 300,000 slaves. After 10 years cleaning vomitoriums and alleys, the slaves became freemen. They all moved to Trastevere which was inhabited mainly by sailors and fishermen. It soon became home to Rome’s first community of Jews who came to Rome with Pompeii the Great after he conquered Judea and Syria. In the 1st century BC, the Jews moved across the river just south of Centro Storico. To this day, the Jewish Ghetto is the oldest Jewish community in Europe. 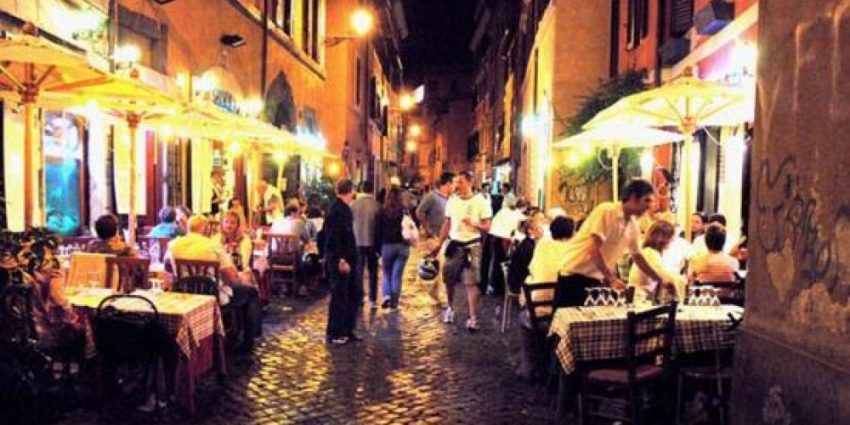 The best aspect about Max’s tours are his historical nuggets you’ll never find in Lonely Planet or history books. Forget Rick Steves. Max spins tales that would fascinate everyone from professors to 10-year-old boys. For example, what 10-year-old boy isn’t interested in fire? Max said during Ancient Rome one of the street gangs’ favorite crimes was arson. Street fires were frequent and easy. The wood tenement housing went up like campfires. It was also a bit risky. The penalty for arson in Ancient Rome was to cover the arson in oil and light him on fire like human torches. Emperors would hold the executions in the Colosseum or Circus Maximus during gladiator battles and chariot races, which I’m assuming would constitute the first night games in sports history.

Fighting fires back then, the city had 7,000 firefighters, many of them freed slaves. Their method of stopping fires was smashing the building to smother the flames. In the 1st century B.C., a wealthy, corrupt politician and general named Marcus Crassus invented the world’s first fire brigade. They’d race to a fire but before going to work he’d tell the owner, distraught with his building turning into kindling behind him, he’ll charge the equivalent of $5,000 to put it out. When the owner tried to negotiate down, Crassus raised it to $6,000. When the building finally became rubble, Crassus paid the owner $1,000 and built an apartment house with 100 apartments where he fleeced the owners for outrageous rent. He soon became the richest man in Rome.

“He invented the fire brigade with 100 employees,” Max said. “Ninety were firemen — and 10 were the best arsonists in town.”

(A side note to Crassus’ fate: He built an army of 60,000 to invade the Persians who saw him as no more than a greedy slumlord. When they killed 30,000 Romans and captured him, they told him, “So you like our gold, huh?” and filled his mouth with molten gold. That would hurt. The Persians cut off his head, put it on a spear and paraded it through Lebanon, Syria and Persia.) 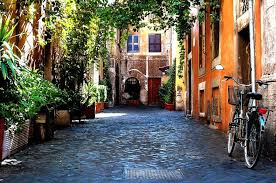 We walked down Via dei Genovesi, one of the most romantic streets in Trastevere. This is the Trastevere I like. Dimly lit. Lined with greenery. Little foot traffic. Romantic, cozy restaurants such as Spirito di Vino are a beacon to anyone with a relationship in Rome.

Then Max brought us back to Trastevere’s violent past. He pointed down another quiet side street, Via San Cosimato. 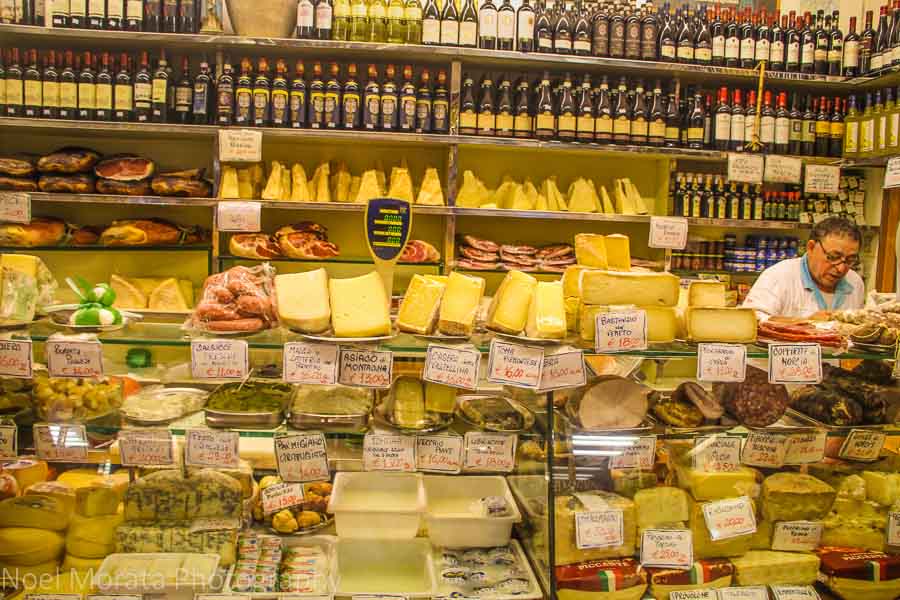 Huh? Piazza Navona in Centro Storico is famous for being the site of staged naval battles during Ancient Rome. Max said under Trastevere’s Piazza San Cosimato are the remains of a stadium that in the 1st century A.D. held 20,000 spectators. An aqueduct brought tainted water from a lake near Bracciano outside Rome into the stadium. One time Caligula, Rome’s worldwide gift to sexual perversion, held a battle during the winter when a storm hit. About 25 spectators drowned.

And Romans think going to soccer games is hazardous.

After that little PR disaster, they held battles only in the summer. To keep the overflowing Tiber from flooding Trastevere, they opened a channel to the stadium. Emperor Claudius held the greatest naval battle, using 19,000 convicts, on Lake Fucino in neighborhood Abruzzo. He told them they’d earn their freedom if they survived. He just never told them how long the battle lasted. After 10 hours, Max said, only 50 of 19,000 were still alive.

“Romans can not swim,” he said.

We continued walking to Piazza di San Calisto where Bar San Calisto was just as packed as I remembered it in 1978. Except instead of hippies and backpackers the outdoor seating area was filled with a mix of middle-class locals and tourists. The same Peroni, Italy’s better-tasting version of Budweiser, still flowed as much as 40 years ago.


We eventually stopped on Via delle Fratte di Trastevere where Max brought us back to the turbulent ‘70s and ‘80s. Trastevere was the birthplace of Franco Giuseppucci, one of the founders of the Banda della Magliana (Magliana Gang), a ruthless fascist gang tied to the murder of Aldo Moro. Giuseppucci worked in his father’s Trastevere bakery and grew up clinging to the barrel Italy’s fascist guns. He even had a bust of Mussolini in his home. He transformed the Banda della Magliana from a group of petty thieves into a major criminal organization that monopolized Rome’s crime scene in the ‘70s. He was eventually killed in 1980, at age 33, when a man on a motorbike shot him, launching a gang war that covered all of Rome.

Today, naval battles, arson and kidnappings have given way to parties, souvenir shops and street performers. It’s a 10-minute walk from my home but a million years removed from what it was not long ago. Trastevere is still worth a visit. The back alleys are dotted with romantic eateries and cozy wine bars known only to the residents in the surrounding alleys know. I stopped off for a glass of wine and cheese plate at one such place, Take Your Time, run by a bald, middle-aged water polo player. Good wine. Quiet street. Warm night. But then I became startled.

Someone nearby lit a match.