A weekend in Spain: Confessions of a Marriott whore


DENIA, Spain — I’m a travel writer by trade but in my previous life as a sportswriter, my amount of days on the road makes me look like a potted plant today. I covered the Colorado Rockies the entire 1997 season. I was a national baseball writer for four years. I covered the Denver Broncos, the University of Colorado, national college football, six Olympics, six Tours de France. I wrote a traveling food column for eight years. I traveled so much I once rolled over in bed and looked at the address on my hotel phone to remember what town I was in. (I think it was Arlington, Texas). I averaged about 150 days on the road a year. It destroyed relationships. Sleep was a luxury. The alarm clock was my daily beast.

The one salvation was a hotel program that is as much a part of an American sportswriter’s job as a notepad and pen. The Marriott Rewards program is a supreme fringe benefit that made all the trips to Nebraska and midnight meals at Black-eyed Pea worth it. Here’s how it works: With every night’s stay, you earn points, the more depending on which of the half dozen levels of Marriott you’re at. If you earn enough, you can get a free night or more in any Marriott in the world. If you earn LOTS of points, you can get a week’s stay in any Marriott in the world and free airfare. It behooves you to plan road trips with Marriott on the itinerary.

And I was a complete, unabashed Marriott whore.


I took girlfriends on free trips — including airfare for two — to Marriotts in Paris, St. Lucia, Borneo and Bali. (Yes, ladies, there is a benefit in dating a sportswriter.) For some, Marriotts became an addiction. I heard of one sportswriter who once refused to go on an assignment because the town had no Marriott. Another spent every single, solitary vacation at the Maui Marriott. Every year. The Maui Marriott. Same time. Same place. Every. Single. Year. One year, he didn’t go on vacation. Why?

The Maui Marriott was closed for renovation.

When I moved to Rome in January 2014, I found myself with leftover Marriott points. I wasn’t going to earn any more. I can no longer afford Marriotts. If AirBnB had a points program, I might have enough points to stay in any spare bedroom in Europe. But I looked at my Marriott rewards chart and saw I had enough remaining points for two free nights in any five-star Marriott in the world. My girlfriend, uber photographer Marina Pascucci, knew little about Marriotts other than the one on Rome’s tony Via Veneto. When we started flipping through all the five-star Marriotts in the world, she saw the secrets of a life as a Marriott whore, however far in the past my sordid life was.


Unfortunately, our scope was as limited as her vacation time. In Italy’s Third World business model, nearly everyone is off the week after Christmas and for three weeks in August, the most crowded, most expensive, coldest and hottest periods of the year, depending on the hemisphere. If you come to Rome in August, the best way to meet Romans is go to Sardinia. Unless we waited until December, we needed somewhere close.

We settled on Denia, a town in Spain I’d never heard of which, if you’re seeking a path less beaten, is always a good sign. A map showed it’s on Spain’s famed Costa Bianca, on the point of a peninsula just across the Gulf of Valencia from hip Ibiza. On its website, the Marriott’s swimming pool looked like something out of a Las Vegas architect’s sexual fantasy. We were sold. I bought two more nights for a Wednesday through Saturday stay. It was the perfect extended weekend in a sexy part of the world.

Due to job commitments totally out of her control, Marina learned the previous week that she couldn’t come until Saturday morning. I stewed the entire two-hour bus ride from Valencia south to Denia and loneliness dug in for a three-day stay when I walked into the Marriott.


What separates them are warm-weather sites with pools. The Denia Marriott’s pool is spectacular. It meanders inside an irregular border that curves aimlessly on the edge of a golf course. Inside the pool is a small island with glorious palm trees. A pool-side bar serves tropical drinks and ice-cold Mahou beer at reasonable prices. Give me a great pool, a cold beer and a beautiful woman and I’m pretty much in heaven. I had two of the three. Yes, I had plenty of beer by the pool.

The one negative of this Marriott is it’s on a hill above Denia way off the beaten path. This town of 40,000 has public transportation right out of rural Wyoming. There is virtually nothing. The Marriott is a 15-euro cab ride to anywhere: the beach, city center, the Denia castle, the tapas bars. Take two round trips trips during the day and you’re out 60 euros. You have to pick your spots.

Fortunately, Denia is worth the trip. I haven’t traveled a lot in Spain. Madrid, Algeciras, Barcelona, Girona, the Pyrenees. But it appears much cleaner than Italy. Across the Mediterranean from Spain, Italy seems like its scruffy, wild and crazy uncle. You keep waiting for him to clean himself up but he’s such a good cook you don’t seem to mind. Denia is spotless. Its beach stretches for 12 miles on the edge of a modern center with palm trees lining brightly lit roads. It has the air of Cannes without the pretentiousness.


The big appeal to Spain for me are tapas bars. In America you go bar hopping; in Spain you go tapas bar hopping. Each tapas bar has its own specialties. The prices range but you can usually find small dishes for 5-7 euros. Have two or three and you have a good local meal, spread out over an hour or more, for less than 20 euros. In Denia, the street to prowl is Calle Loreto. It cuts horizontally right through the middle of town and is Old Spain right out of central casting. The narrow pedestrian street is lined with tapas bars, each one sporting outdoor tables under soft lighting from 18th century lanterns and black, cast-iron balcony railings. An unseen street musician played Spanish guitar. I felt like I was walking through a Corin Tellado romance novel.

I settled in at an outdoor table at Ca Cotet. Just opened this year, it had a long list of tapas listed on a board on the outside wall. Some of the more popular tapas you’ll see around Spain include: 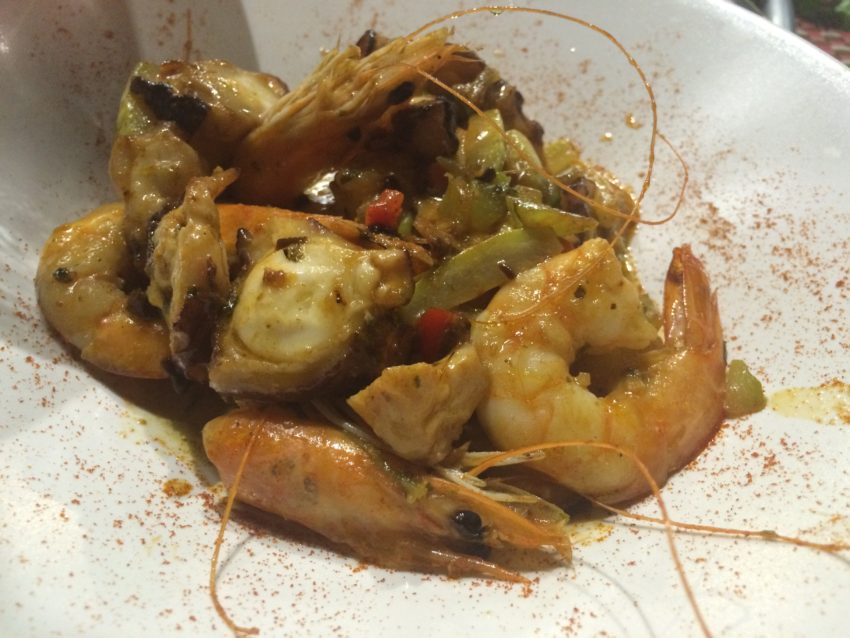 I started with possibly the most popular tapa in Spain: croquettes. Six fried balls, three filled with ham and three with cheese. They melted in my mouth and not a spot of boiling grease singed my tongue. Next I followed with Galician-style sauteed octopus and prawns, fat, chewy morsels covered in warm olive oil. I washed it down with a sangria, the elixir of the Iberian gods. Every bar in Spain from Malaga to Pamplona serves this concoction of dry red wine, brandy, triple sec, sugar and whatever fruit they have lying around. Served ice cold with chunks of fruit floating at the top like berries on a vine, sangria mysteriously goes with every tapa served in Spain. I remember swilling sangria on Madrid’s Plaza Mayor in 1978. Franco had fallen 2 ½ years previously and the Spanish were celebrating. They’ve been celebrating ever since.

Long before Franco pounded his fascist fist into every face in Spain, Denia itself was a welcome mat to every tribe with a pulse and a sword. Greeks. Romans. Visogoths. Arabs. Romans. The town name comes from Daniya, which is Arabic for “lowland.” Muslims conquered Iberia in the seventh century and in the 11th century built a massive castle in the middle of what is now Denia’s town center. I took the precarious hike over highly uneven 1,000-year-old stones to the roof where workers were digging for artifacts. I looked out and had a spectacular panoramic view of seaside Denia. To my right was a coastline that curved gently toward the horizon. Directly below was the Nadia port lined chock-a-block with pleasure boats docked in the calm blue Mediterranean. To my left was a stretch of golden sand that called my name like a bathtub full of sangria.

Denia has two areas of beach. Far to the right of the port are rocky beaches that make up for uncomfortable footing with cozy coves perfect for privacy if they weren’t so crowded. The other is this stretch of gold sand that is comfortable, functional and, of course, clean. It leads to a blue-green sea that seemed clear enough to snorkel. Picturesque and romantic it is not. Instead of palm trees, lining the road are ugly apartment houses, some half built. However, for the feel of fine sand in your toes and dipping into a refreshing, clean sea, Denia’s beach serves the purpose.

But compared to the Marriott pool, Dania’s beach is a riverbank on the Ganges. Marina is an Italian beach babe. She loves walking along the sea and lying in the sun. When she mercifully arrived Saturday, she took one look at the pool and I immediately saved 30 euros on taxi fare to and from the beach. Granted, we heard the sounds of metal fairway woods hitting golf balls instead of the Spanish guitar, but sipping a pina colada and laying on a lanais chair, Marina was as happy as I’ve ever seen her.

I treated her perseverance for coming to Spain for a mere 24 hours by taking her to Peix & Brases, a high-end restaurant with terrace seating overlooking the port. First came a plate of tapas: parmesan bon bons, onion and ham balls, beef carne seca all accompanied by little test tubes of a refreshing melon and mint drink. I had grilled dover sole with butter sauce and smoked baby prawns. It was slightly breaded and the dried algae looked like coagulated sand but had a nice smoky taste to it. Marina merely had the best tuna I’ve ever tried. It was grilled in citrus dressing atop a pile of crunchy vegetables. 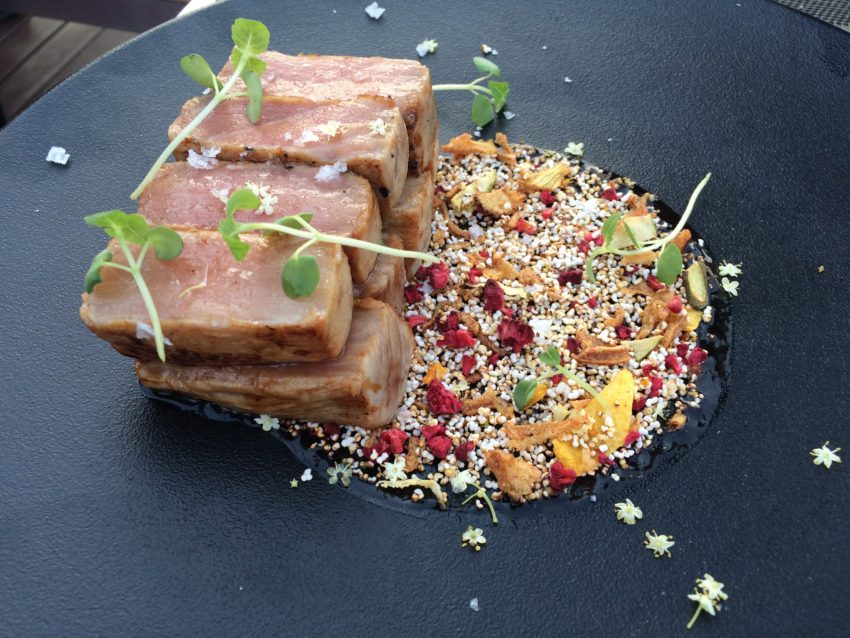 As we took the bus back to Valencia the next morning, a thoroughly satisfied Marina said something I didn’t quite understand. I think she wanted me to get back to sportswriting.