Almaty: Kazakhstan’s former capital a beacon of post-Soviet modernization — if only the government kept step

ALMATY, Kazakhstan — I was sitting in what can only be described as an Arabic gazebo. My table sat under a pointed roof with drapes on four sides pulled back like on a square four-poster bed. It looked more like a harem tent in the Sahara than a dining table in Central Asia.

But then came the food. Then more food. And more food. From meat dumplings to cheese soup, from horse jerky to camel’s milk, I dined like a true Arab prince. After chewing laboriously on mutton in Kyrgyzstan, I had found the culinary capital of Central Asia.

Almaty represents what happens when former Soviet republics discover their own natural riches and spend them lavishly. The largest city and economic engine of the world’s ninth-largest country is awash in high-end restaurants, rollicking nightclubs, shiny shopping malls, leafy boulevards, efficient public transportation and cozy cafes. It’s what likely came to mind 30 years ago when oppressed subjects of the old USSR dreamed about a future democracy. 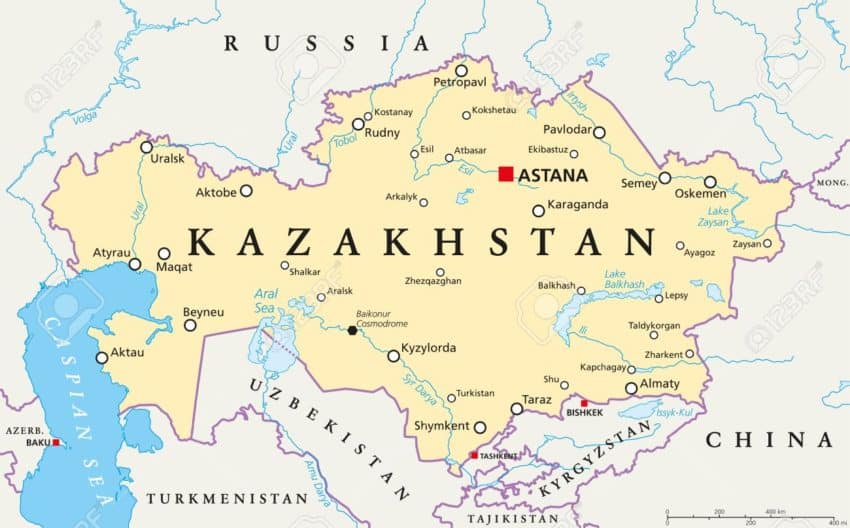 The national government? Well, it hasn’t caught up on the democracy scale, as 700 protesters confirmed this week when they were arrested over what they viewed as mock elections. Kazakhstan is like one of the shiny SUVs I saw cruising up tree-lined Nazarbaev, one of Almaty’s many pretty streets. The SUV looks great from the outside but inside grinds the engine of a 1965 Trabant.

Still, from the outside? Oh, that body!

I had an eight-hour layover in Almaty on my Almaty Airlines flight from Bishkek, Kyrgyzstan, to Dushanbe, Tajikistan. Thanks to Kazakhstan’s no-visa policy for Americans, I cruised right out of the airport skipping past immigration and customs and had a pleasant afternoon in one of the world’s most underrated cities.

Almaty, a city of 1.7 million people, is blessed with some of Asia’s most breathtaking urban scenery. On the ride into downtown, the snow-capped Zailiysky Alatau mountains seemingly came right up to the road’s guardrails. If I had more time I would’ve taken a bus to the city’s outskirts and some of the country’s best hiking, some leading to 4,000-meter peaks. Or if it was winter, I could go to one of the four ski resorts within about 30 kilometers of the city.

But it was a dry, sunny 80 degrees. I had six hours before getting back to the airport. For a quick look at the city, I took a gondola up to Kok-Tobe, Almaty’s landmark playground hill that was built in 2006. Up top, I walked around restaurants with outdoor seating, crafts stores, a kiddie playground, tame carnival rides, a rollicking sled ride and a life-size bronze statue of the Beatles, the only sculpture in the world featuring all four together. Just past a small zoo where male peacocks displayed a massive spread of white feathers about three meters across, I stood under the 372-meter TV tower that can be seen from all over the region.

However, I came up for the views. They were spectacular and showed a modern city blending new world wealth with old Soviet-style architecture. In 2016, Kazakhstan was the world’s No. 16 oil producer, pumping out 1.6 million barrels a day. Below me were what rose from seeds planted: glittery, high-rise apartment houses, the windows all sparkling in the sun. Just past them stood some trademark Soviet-era buildings like the 26-story Hotel Kazakhstan, built in 1977 with a spiked, pointy roof, like a Soviet spaceship ready to take off; the egalitarian-named Central State Museum, with its beautiful sky blue dome built in 1985; and the blockish, yellow Kazakhstan Academy of Sciences, boasting of Soviet technology since 1946.

The city has the most interesting ethnic mix of any I saw through four Central Asian countries. Kazakhstan’s population of 17.8 million, by far the largest in Central Asia, is 65 percent Kazakhs whose Asian features are much more delicate than the Kyrgyz. While a Muslim country, Kazakhstan has much heavier Russian influence. Concerned about the Nazis overrunning his factories along the European borders, Joseph Stalin moved thousands of workers and factories to Kazakhstan. When old Russians talked about a prison “in the middle of nowhere,” they may not have been talking about Siberia. Kazakhstan was second only to Siberia in the number of gulags.

Talk to some locals today and you think maybe the country hasn’t changed much.

This week’s massive protests and arrests that made international news centered around elections that have become comical. Like many other ex-Soviet republics that put in charge the old communist guard following independence, Kazakhstan put in place Nursultan Nazarbayev. The son of a poor laborer and growing up in the mountains, Nazarbayev had been an old Soviet hand who became Kazakhstan’s first secretary of its communist party in 1989. Still clinging on to the communist apron strings in Moscow, he did not want the USSR to collapse and, thus, Kazakhstan became the last Central Asian country to become independent.

Since then, he has engineered Kazakhstan into the forefront of progressive ex-Soviet republics. In 1998 he moved the capital from Almaty to the more centrally located Astana and poured money into a glittery new skyline that has attracted the world’s top architects. Using oil resources and an eye on tourism, Kazakhstan has grown into an urban paradise rivaling many Western European countries and a trendy off-the-beaten-path destination for intrepid travelers.

However, in openly admitting he favors economics over democracy, he has won a string of five-term elections that have been nothing short of formalities. In his last election in 2015, he won 98 percent of the vote. The other 2 percent, apparently, voted for themselves.

Then in March, he resigned. No one knows exactly why but it came one month after he fired his entire government for economic growth that didn’t meet his expectations. In response, the capital of Astana was renamed, in his honor, Nur-Sultan.

The people hoped for true open elections for the first time since independence. Instead, interim president Kassym-Jomart Tokayev, Nazarbayev’s handpicked successor, took 71 percent of the vote Sunday. The Organisation for Security and Cooperation in Europe has refused to recognize Kazakhstan’s elections as fully democratic. Police have raided homes of activists; journalists have been detained.

The people took to the streets in protests despite a law against protests. With exiled activists promising more demonstrations soon, Tokayev was sworn in Wednesday with Nazarbayev expected to wield plenty of power as head of his Nur-Otan political party

Fortunately, I caught Almaty in the calm before the storm.

Nothing can be calmer than sitting in said makeshift tent dining on a vast array of local cuisine. Qamaq is one of the new gems on the Almaty restaurant scene. Opened just last year, it is the place to go for an introduction into Kazakh food.

Not to say Qamaq’s atmosphere is laid back but there’s a hammock by the bar, perhaps for food comas.

Thankfully in the shade, I ordered a Line, one of Kazakhstan’s fine national beers. I should’ve saved room for food. The intake was massive. First came a warm salad of green vegetables that tasted a little like chop suey. Second were little cheese balls called kurt, so dry and chewy I needed an entire Line to get one down. It was, however, quite delicious and surely should come soon to taverns in the American South. 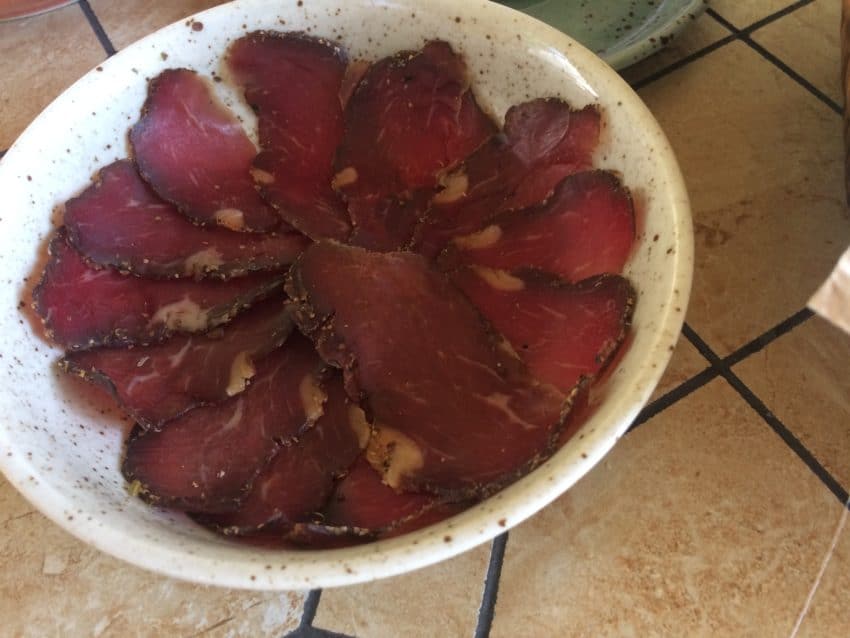 Later came a bowl of what looked like horse jerky. They were little round shavings of dark maroon horse meat called karta. I like horse meat and it’s naturally popular in Kazakhstan where Genghis Khan once raped, pillaged and plundered while leaving only the Mongol cuisine behind. I’m not particularly fond of horses. Thus, I had no problem devouring the entire bowl. It tastes like venison but not nearly as gamey.

Them came the main horse. The national dish of beshbarmak is a bowl filled with huge chunks of horsemeat on a bed of flat, square noodles. Next was a soup, kind of a bouillabaisse, in which I added a dollop of cream cheese. Then came the samsan, fried triangle square filled with meat.

By this time, after snacking on fried dough in a dill dip, I was about ready to explode. What better way to wash it all down but with …

It’s called shubat and came in a small bowl that looked like something I’d give a cat — preferably a starving cat. I picked it up, took one sip and made a face that looked like I swallowed mating cockroaches. It was as sour as a lemon and room temperature. In a lifetime of eating weird foods in weird places, camel’s milk made my bottom 10.

At the end of a long layover, it was one step back after many steps forward, kind of like Kazakhstan. As the country pulls itself off the Russian steppe, let’s see if its new motor is a BMW or a Trabant.