Amalfi Coast and Valentine’s Day: A match made in Italian heaven

Some phrases drip with so much romance you must towel yourself down just reading them. A few romantic places on earth don’t meet the hype. Cancun comes to mind – unless you get aroused by binge drinking. Niagara Falls is a cliche. Dubai is a joke.

But the Amalfi, a UNESCO World Heritage Site since 1997, lives up to it all. Hotel balconies on steep cliffs overlooking the royal blue Tyrrhenian Sea. Bright yellow lemon trees lining the road like sentries. Fresh seafood pasta at candlelit tables on the beach.

Add Valentine’s Day in the winter off season and you have solitude in a setting made for the likes of Sophia Loren and Marcelo Mastroianni. You have peace and quiet in one of the most romantic regions in the most romantic country on earth. I could almost hear the mandolin music.

Beats salami and cheese in lockdown.

With Italy emerging from its two-year Covid slumber, I took Marina to the Amalfi. We’ve been here before: Positano, where Italy’s best artists can’t capture its beauty; Sorrento, which inspired the likes of Byron, Dickens and Goethe. I’d been to Praiano, a village hanging on a cliff.

Vietri sul Mare has all the qualities of the other Amalfi towns: cliffside balconies overlooking the sea, great seafood, meandering alleys in a charming old town. But Vietri sul Mare separates itself in one aspect.

It’s one of Italy’s many capitals of ceramics.

You know ceramics. In your home you probably have a plate, salad bowl or coffee mug made in Italy. They usually have more bright colors than a Picasso painting and so beautiful you almost don’t want to soil them with coffee or salad dressing.

In Vietri sul Mare, ceramics are as dominant as beer in Dublin. They’re everywhere. We took the windy 20-minute walk down to our hotel from the train station and the narrow street was lined on both sides with ceramic shops. This town of about 8,000 people has more than 60 of them. Almost everything in life that could possibly be painted is available in Vietri sul Mare.

We didn’t come to stock our kitchen. We came for Valentine’s Day and even the Amalfi’s mild winter weather cooperated. We walked to our hotel in sunny weather in the mid-50s. No breeze came off the sea, making me comfortable in a simple T-shirt hauling my backpack to our hotel.

Oddly, however, the Amalfi’s Campania region has not caught up with the rest of Italy’s Covid reforms. While Italy lifted its outdoor mask mandate Friday, Campania did not. The town was masked up but once we hit the hotel room the full freedom began.

The La Lucertola rests on a cliff at the bottom of a long, windy road through the town center. Like most Amalfi hotels, the lobby is on the top floor and we descended to our room where we found the bed adorned with red rose petals and red and white heart-shaped balloons.

Yes, Italians do do romance.

We stood on the small balcony and shared the ceremonial beer we always have when we arrive at a new destination. The sun flickered behind two big, jagged rocks jutting up from the sea. The royal blue Tyrrhenian was as calm as a lake and as clear as the Caribbean. We could see the ocean floor 20-30 feet down.

A tip: If you dream of the Amalfi, do not come in July and August. Picture Disneyland without roller coasters. (In fact, don’t come to Italy in July and August.) Even on weekends Amalfi gets invaded by Italians. We arrived on Sunday and business was brusk, a good sign considering Italian tourism lost 121 billion euros in 2020 alone.

We sat at Bar Miramore on a piazza overlooking the sea and watched Italians walk by under the shade of big, blooming trees with red heart decorations hanging from street posts. Confetti from a Carnival celebration littered the stone square. The Costa d’Amalfi white wine was crisp and cold and dry and the perfect way to wet our valentine.

In late Sunday afternoon we walked down to our hotel and saw the hell that can be Amalfi on the weekend. Traffic coming up from the sea was backed up for miles. A long line of cars at a standstill snaked all the way down the hill. With every turn, we saw another line of cars to the next turn. Then the next. It reminded me of my departures from mountain top finishes in the Tour de France when I’d leave the press room at 9 p.m. – four hours after a race finished – and reach my hotel past midnight.

The next day, Monday, Valentine’s Day, Vietri sul Mare was nearly empty. We were the only ones prowling ceramics shops. Bored owners read newspapers or texted on their cellphones or chatted with their merchant neighbor. I love Italy in the winter. It’s quiet. It’s uncrowded. It’s cool.

Yes, it rained. So? In Italy, it doesn’t rain in restaurants and wine bars. 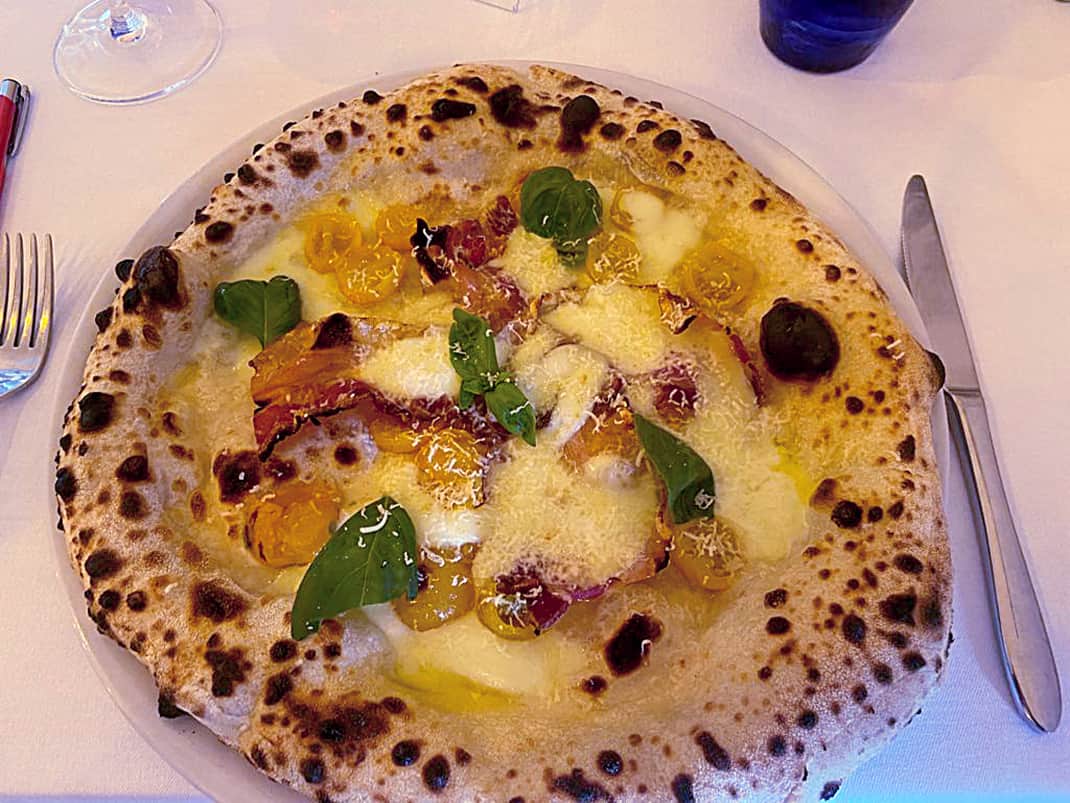 We ate well, which is the biggest redundancy in Italy. Locals told us Da Giufe’ has the best pizza in Vietri sul Mare. We are 30 miles southeast of Naples, meaning the pizzerias here specialize in Neapolitan pizza, the thick, doughy crust that is almost as delicious as the ingredients. At a quiet corner table under an arched ceiling, I had a Solare pizza: smoked provola cheese, bacon, semi-dry yellow tomatoes and basil. It was void of fat with no grease. You could place a doily on the pizza plate afterward and not stain it.

We had one meal on the sea. Across the empty beach near the town marina, we had dinner at Dal Pescatore (From the Fisherman). A big glass display case showed its fresh catches of the day. I had tuna with black salt, maybe the best tuna of my life, with a couple glasses of Ettore Sammarco, one of Campania’s all-natural white wines. 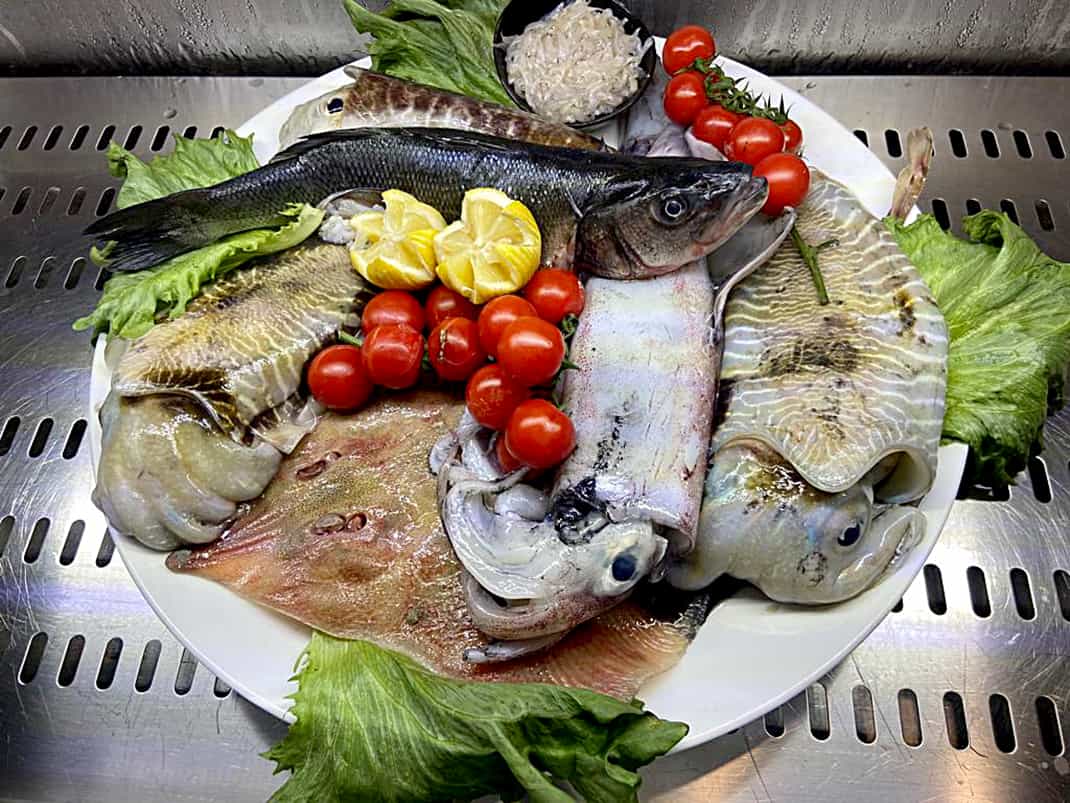 I told the owner, “Questo non e’ cibo! E’ sessuale! E’ orgasmico! (This is not food! It’s sexual! It’s orgasmic!)” Hey, it’s Valentine’s weekend. I was in the mood. So was he. He laughed. Frowning Marina did not.

On Valentine’s night, we booked Evu’, where its outdoor seating spilling into the narrow alley was packed for lunch the day before. Despite being full from the pizza six hours earlier, I still wolfed down the paccheri con sugo di spade con olive (fat, half-tubed pasta with swordfish sauce, cherry tomatoes and olives). Marina had grilled octopus with potatoes.

Yet beyond the seafood, the ocean vistas and the Campania wine, what dominates nearly every step through Vietri sul Mare is ceramics. Their history in Italy is as old as the land itself.

The practice, as crude as it was, dates back to about 6500 B.C. It makes sense if you think about it. What makes ceramics are earth, water and fire which were the three essentials of life back then. Ancient Greek potters spread the practice to the coasts of Southern Italy where it was adopted by the Etruscans, Italy’s first settlers.

Modern-day ceramics began taking form in the 9th century A.D. Ceramic works in Mesopotamia, modern-day Iraq, were shipped along trade routes and came to Italy via the Spanish island of Mallorca in the 12th century.

During the Italian Renaissance in the 15th century, improvements were made to kilns and the glazing process. Instead of just the original colors of purple and green, blues and yellows and other bright colors were added.

Like sculpture and painting, ceramics in the Renaissance became an art form. Noblemen even commissioned pieces using mythical and biblical figures.

Soon, different Italian towns became known as ceramic centers. Vietri sul Mare is listed along with Deruta in Umbria, Montelupo in Tuscany, Grottaglia in Puglia and Monreale in Sicily. Each place specializes in motifs from the area. Not surprisingly, the espresso set, letter holder and wall hanging I bought are covered in lemons.

At the top of the street leading down to our hotel, not far from the town center, is the biggest ceramics factory in Vietri sul Mare. Ceramica Artistica Solimene is in an artsy building covered in orange and green ceramic strips. It was designed in 1951 by Paolo Soleri, one of Italy’s most famous architects who was friends with American architectural icon Frank Lloyd Wright.

Soleri received the request from Vincenzo Solimene whose family has designed ceramics for more than 100 years and who brought the practice to Vietri Sul Mare in 1947. Inside the sprawling structure are bowls, plates, cups and nearly everything else we saw in the dozens of shops around town.

It was far from a showroom. But the dust added a layer of authenticity to it. When we arrived, a young couple bought a table set seemingly for the Italian air force.

We sat down with Giovanna Solimene, Vincenzo’s daughter, and I asked her what puzzled me: How do ceramic businesses make money when there are more than 60 in this small town?

“We always have business,” she said. “We’re lucky because it’s the most beautiful place in the world and tourists come here just for dishes.”

Because the Amalfi is near Capri, one of about five places Americans know in Italy, Americans are their best customers.

“They are crazy for ceramics,” she said.

She said Amalfi’s ceramics took off in the 1930s when Max Melamerson, one of Germany’s famous war-time artists and a Jew, moved to Vietri sul Mare to escape Nazi persecution. Many other Germans followed him here. They also faced persecution in Italy but found enough protection in the artist community to exchange ideas with Italian artists.

“They worked together with the Vietrisi and produced ceramics that would be famous all over the world,” Giovanna said.

Hey, what says love more than a set of ceramic shot glasses? It’s Valentine’s Day on the Amalfi Coast. Everything here is amore.

How to get there: Vietri sul Mare is a 3-hour, 20-minute train ride from Rome, including a short changeover in Salerno. Price is about 30 euros.

Where to stay: La Lucertola, Via C.Colombo 29/b, 39-089-210-255, info@hotellalucertola.it. Four-star hotel with rooms overlooking the Tyrrhenian Sea. Rooms start at 97 euros including buffet breakfast.