Apocalypse now: Why Italy flamed out of World Cup qualifying for first time since 1958


The Abbey Theatre Irish Pub sits on a corner of one of the narrow, windy streets near Piazza Navona. Rome doesn’t have sports bars, and this is about as close as it comes. It’s loud. It’s crowded. It’s passionate. Monday night, a passionate crowd turned silent. A nation lowered its head in shame. Upstairs in Abbey I watched a German TV station interview Italians on the national history they just witnessed. As two bubbly, blonde babes in Sweden shirts bounced nearby, I heard an Italian in a sharp business suit mumble into the camera “Disastro storico” (Historic disaster). My comprehension of Italian isn’t great but some words stand out when you watch the national sport hit a low not reached in 60 years.

They are all being spoken and printed today from the ports of Sicily to the mountain chalets of the Italian Alps. I’m 61 years old. I was a sportswriter for 40 years and have followed sports since the early 1960s. I don’t recall one nation embarrassing itself on a field of play as Italy did this year in World Cup qualifying.

Its 0-0 draw with Sweden in Milan Monday, after losing 1-0 Friday on the road, sealed a fate unthinkable just last year. Italy, a four-time World Cup champion, has gone from taking Germany to a shootout in the quarterfinals of the European Championships to not qualifying for the World Cup for the first time since 1958. The last time Italy didn’t make the world’s biggest sporting event, Americans still drove the Edsel, The Beatles were called the Quarrymen and Khrushchev became premier of the Soviet Union.


The U.S. didn’t qualify, either. It couldn’t finish in the top four of a group of six. But half the U.S. sports fans refer to soccer as kickball. In Italy they refer to it as religion.

Monday’s view of Italy’s players crying on the field in front of a yellow-and-blue background of celebrating Swedes, who hadn’t qualified since 2006, represents a flatlining of a sporting culture. Take out the 2016 Europeans and Italy has done less on the world stage than the U.S. After winning the 2006 World Cup, it couldn’t get out of the group stages in 2010 and 2014. It has one win in six games. 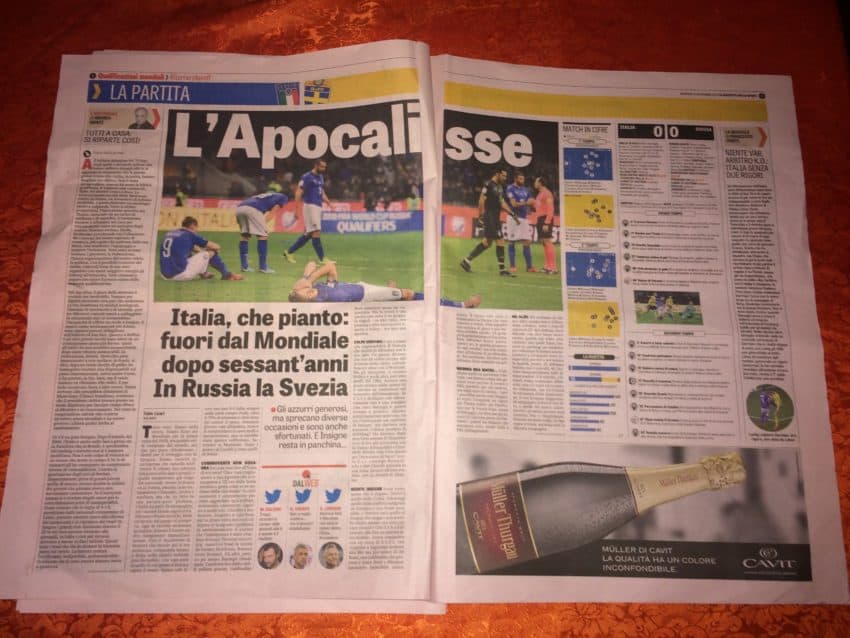 The hysterical Italian media is at fever pitch. My La Gazzetta dello Sport, behind the end-of-the-world headline “FINE” (THE END), wrote, “It is one of the darkest pages of our sporting history; a brutal blow beyond the incalculable damage for a country which lives and breathes football. It’s a sporting equivalent of Titanic.”

The Rome-based Corriere dello Sport, teed it up with the headline “EVERYBODY FIRED!” It added, “It’s an intolerable footballing disgrace; an indelible stain. It’s the end. Apocalypse, tragedy, catastrophe. Call it what you want, but our football is in a serious crisis. We’ve been relegated to Serie B of world football.”

Keep in mind it’s harder for European teams to qualify than in CONCACAF where the U.S. usually just needs to show up reasonably sober. In Europe’s UEFA, teams only automatically qualify if they win their six-team group. The eight best second-place teams meet in home-and-home playoffs. Italy had the same group as Spain. It’s no disgrace to finish second to Spain.

But the way Italy stumbled and bumbled its way into a playoff then went impotent against a Swedish team made up with twice as much heart as talent struck deep into the Italian soul. Italy scored only three goals in its last six games, dating back to June.

In Friday’s first game outside Stockholm, Italy had all the energy of 10 guys waiting for a gondola. The announcers had more enthusiasm. Sweden didn’t get off many shots, either, but out-raced Italy for nearly every ball, roughed up the Italians when they didn’t, scored off a deflection early in the second half and held on for a shocking 1-0 win.


As Monday’s second game approached, I read the papers and was stunned by Italy’s arrogance, its sense of entitlement. Manager Gian Piero Ventura, a 69-year-old journeyman I’ll barbecue below, wailed about the official letting Sweden get too physical. He joined the players’ chorus saying, “We’ll make the World Cup. We’re Italy.”

In Monday’s second game, Italy had a sense of desperation that bordered on panic. It dominated possession 76-24 and Sweden’s lone offense was the occasional counter attack. But Sweden’s defense was disciplined and ruthless and it has a great goalkeeper in Robin Olsen who plays for FC Copenhagen. Italy outshot Sweden, 14-1, but Olsen made seven saves and other shots just missed.


Being a lifelong fan of the underdog on the road, I found myself pulling for little Sweden. But I remain baffled by how a nation where soccer is more important to its people than the Vatican, where 12 million tuned in Monday night, could let it slip into depths not known in this generation.

“There are a number of factors,” Agnew said. “One factor is Ventura.”

Ventura today is the most unpopular Italian since Nero. Rome’s Senate won’t declare Ventura a public enemy but I’m surprised he didn’t get fired after the game before he crossed the touch line. Ventura’s appointment last year baffled the nation. Italy went from 48-year-old Antonio Conte, who led Juventus to three straight Serie A titles and Italy to the Euro quarters, to this frumpy fossil whose list of jobs is longer than Hunter Thompson’s police blotter. He has coached 18 Italian clubs in 26 years. He had been fired six times. His claims to fame are earning team promotions five times and staying on at Torino from 2011-16. The most prestigious club he managed was one season at Napoli. The number of games he’d worked outside Italy was seven.


However, he only cost 1.2 million euros. Conte cost 4 million and after Euros left for Chelsea which he led to last season’s Premiership title. Of his 4 million, Puma paid about half as part of its sponsorship deal and wasn’t going to re-up for just anyone. The Italian Football Federation (FIGC) approached Marcello Lippi, who led Italy to the 2006 World Cup title, but his son is a football agent and the conflict of interest prevented it. So out went Conte with his designer suits, wild enthusiasm and wide-open football; in came Ventura with his long parka, haggard look and rigid ways.

This was like replacing Caravaggio with a house painter.

If Ventura was any stiffer in his coaching style, he wouldn’t need a trainer. He’d need a mortician. He stuck to a 3-5-2 formation, which utilizes only two strikers and puts a greater emphasis on defense. That left on the bench one Lorenzo Insigne, the rising 26-year-old star for Napoli which is leading Serie A. He didn’t play Insigne until the second half Friday and he never got off the bench Monday.

Daniele De Rossi, one of three players left from that 2006 World Cup team, could be seen screaming at an assistant coach on the bench to put in the kid. “Metti Insigne. Dobbiamo vincere!” (Put in Insigne. We must win!” La Gazzetta reported him saying.

“In technical terms, Ventura is responsible for what happened,” Agnew said. “In overall terms it’s (Carlo) Tavecchio. The buck has to stop with him.”

Yes, Carlo Tavecchio, FIGC’s 74-year-old president and former Lombardy politician who was elected in 2014 after being convicted five times on charges ranging from forgery to abuse of office. They are Italy’s Dumb and Dumber but on aesthetic terms, Tavecchio’s appointment was more offensive. While campaigning for the position, he complained about the influx of too many foreign players in Serie A, particularly from Africa.

He said — and I am not making this up — “In England they select players based on professionalism, whereas we say that old ‘Opti Poba’ (a hypothetical player) is here now, so let’s take him. He was eating bananas before but now he’s starting for Lazio and that’s OK.”

Yet he still got elected. Some say he became a favorite of the power clubs’ presidents who felt they could manipulate him. The racist remark? It’s normale in today’s Italian soccer.

“Not only is that incredibly insensitive and incredibly racist, but if somebody says that, I ask how can you trust that guy to run the edicola (newsstand) on the corner or the public toilet?” Agnew said. “What are you giving him the most important sports federation in the country for?”

I called Agnew for a couple of reasons. I read him for years when I picked up World Soccer magazine while living in Denver before Rome. He also writes a weekly blog for it and contributes to ESPN.com. But he has also been The Irish Times’ Rome general correspondent for the last 30 years. The way football is entwined in Italian society, no one is better at comparing Italian football with Italian life.

“The greed, the cynicism, the corruption of the ruling class in Italian football is nothing different from the greed, the dishonesty, the corruption of the ruling class in Italian politics,” he said. “You have an (74)-year-old man running the Italian Football Federation and running it into the ground. You have an 82-year-old tycoon (former prime minister Silvio Berlusconi) who’s deciding to fight the country even though he’s been in nothing but scandals and court cases for the last 20 years. Italian football, like football anywhere else, is only ever a mirror reflection of what goes on in the country.”

Every finger in Italy is pointing at the FIGC and not the players. Italy is still a reservoir of talent. Italy’s Under-21 team has reached the semifinals in two of its last three World Cups. Ciro Immobile, Lazio’s 27-year-old wunderkind, leads Serie A with 14 goals in 11 games. Yet he was a mere rumor on the field against Sweden.

When Germany bombed out of the 2000 Euros, it tore down its organization and rebuilt it from the youth program up. The Under-16, Under-18 and Under-21 teams all play in the same system as the national team. When they reach the senior level, there is less adjustment. Today, Germany is the defending World Cup champion and is the 5-1 favorite in Russia along with France.

In Italy there is a major disconnect.

The future begins now. As I’ve typed this, I’ve frequently clicked on ESPN.com to see if Ventura has received, as my college football colleague Dennis Dodd astutely refers to, “the big haircut.” Not yet but it’s as inevitable as bells pealing in St. Peter’s.

Waiting unemployed is Carlos Ancelotti, 58, who won league titles with Bayern Munich, Real Madrid and Arsenal. Roberto Mancini, 52, has won 12 cups and is coaching in obscurity in Russia. Would Max Allegri, 50, look for a new challenge if he wins a fourth straight title for Juventus? Maybe Conte’s clash with Chelsea’s front office will boil over and he could be lured back.

However, they are all on the five-star price list and the FIGC must change its philosophy or find another sponsor if it wants a name that will draw headlines and not head scratches.

In the meantime, next summer will be strange around here. No huge crowds in Piazza Venezia to watch Italy on the big screen. Pubs crowded with only foreigners. Newspapers filled with stories about the French and Germans and Spanish and English. The only Italian in the papers may be the shoe ads.

Meanwhile, at Abbey Pub, I look forward to seeing Swedish meatballs on the menu.