As world continues to crumble, tiny Sermoneta serves as a quiet respite


SERMONETA, Italy — I stayed up until 1:30 Saturday morning watching the news coverage in Paris and went to bed wondering how the U.S. invasion of Iraq helped create ISIS and where the swine will hit next. Neither thought led to a fitful sleep. Reports say Rome is on the ISIS wish list. The Jubilee Year begins Dec. 8 and more than 30 million Catholic pilgrims are expecting to pour into Rome over the next 12 months. It seems from a twisted, sick, terrorist’s point of view, Rome — and, more specifically, the Vatican — would have a red circle around it on a map somewhere in a Middle East cave. 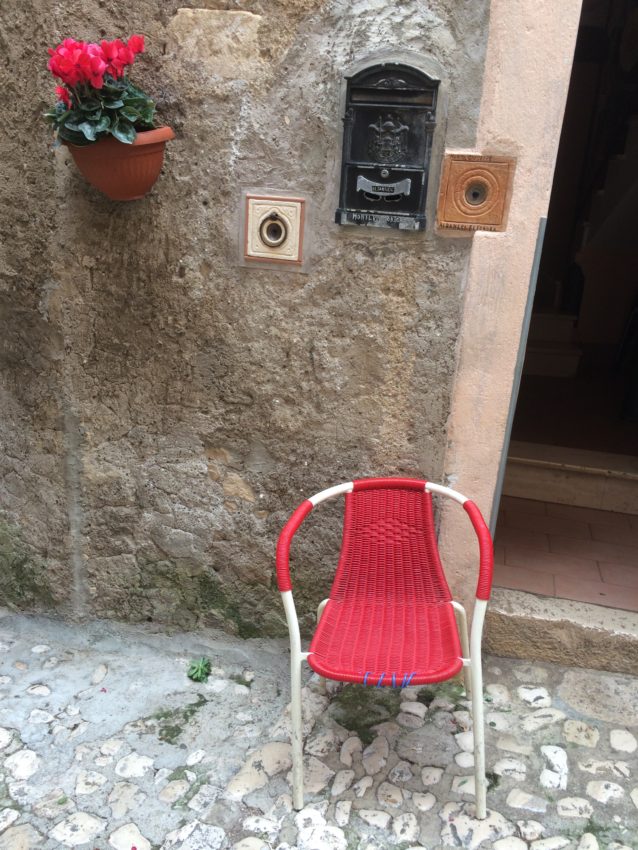 The next morning I needed to clear my head. Thoughts of dead French music lovers, terrorist body parts, anti-Muslim backlash and a holy war were too much. Fortunately, living in Rome gives me the opportunity to get away from any problems, personal or international. Go to a piazza and linger over a cappuccino. Hop a cheap flight to London. Enter a church and see artwork that doesn’t make religion seem all that bad. 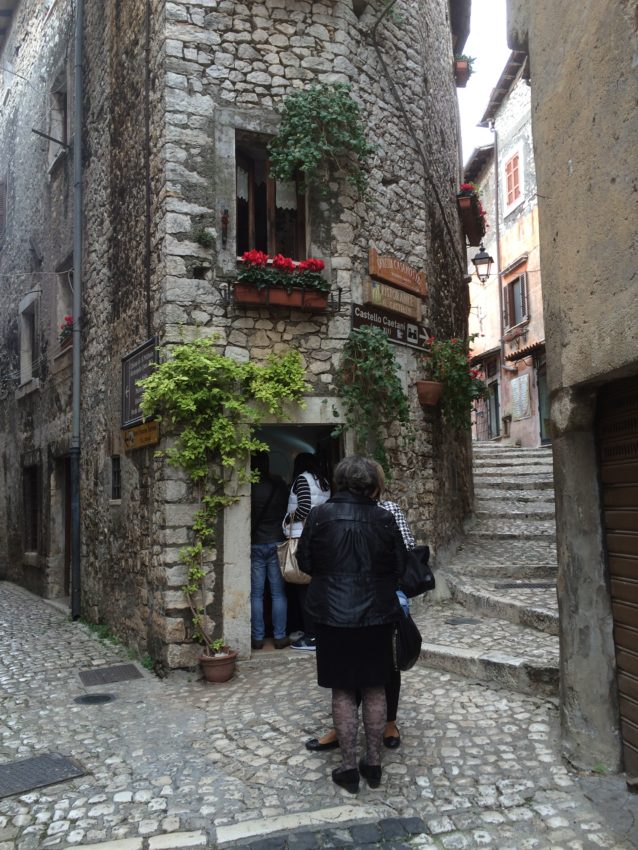 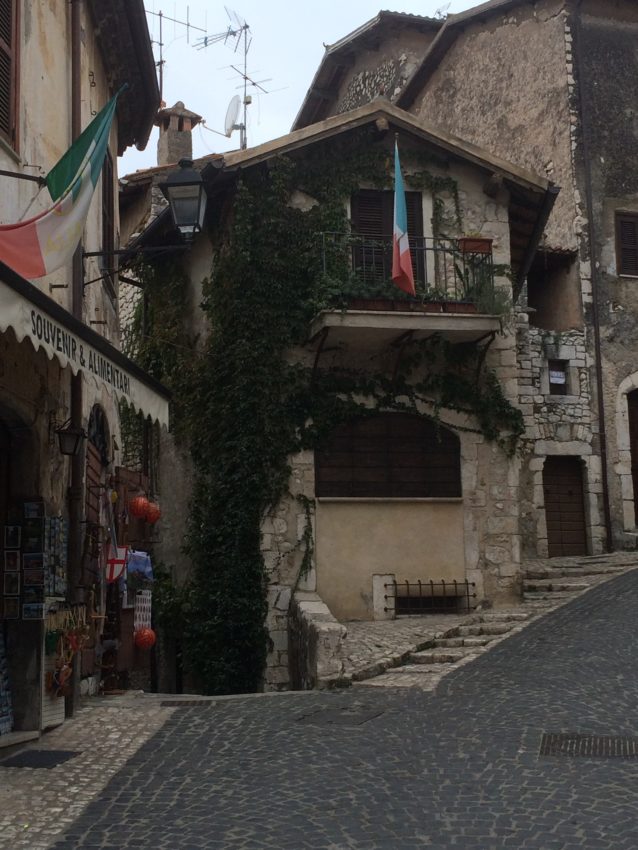 Saturday I went to Sermoneta. Sermoneta is a medieval village atop a cliff more than 1,000 feet above an agricultural area, one of Benito Mussolini’s more successful projects from the 1930s. About 55 miles south of Rome and reachable by bus from the EUR Fermi Metro stop, Sermoneta has about 600 people, none of whom apparently has a car. I didn’t dodge any along the one narrow, cobblestone road. The rest of the village consists of windy, twisting alleys lined with pots blooming with red, yellow, purple and orange flowers. Even on an overcast day, the town burst with colors. 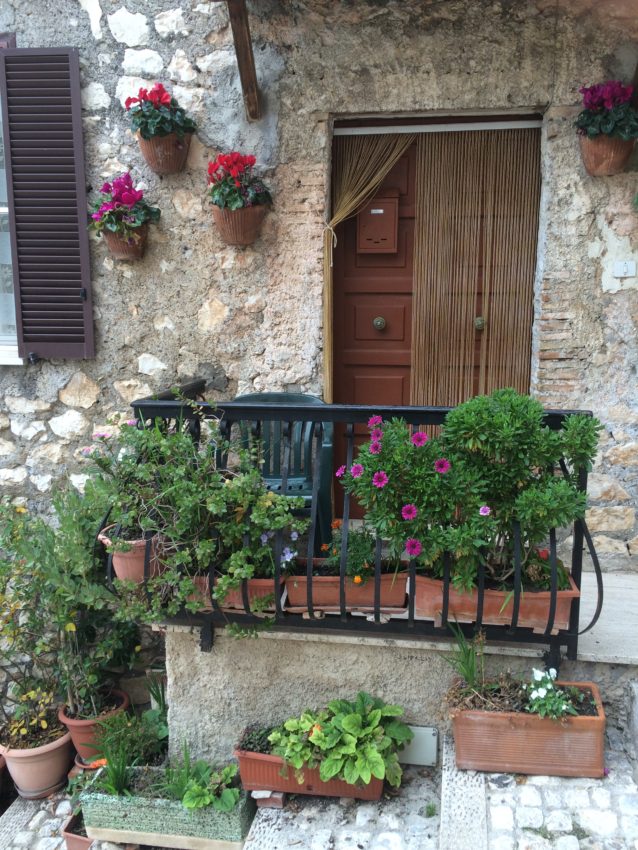 The village is as quiet as an outdoor abbey. Residents lingered at cafes, bakeries and shops. The little piazza was served by a tiny cafe too small inside for more than a handful of customers. It sold a passable cappuccino and a chocolate cornetto that tasted even better overlooking the vast, green Pontine Plain below. I noticed no other tourists. No buses were in sight. This is mid-November, part of Rome’s off season, and with daytime temperatures in the low 60s it is an ideal time to explore.

The town is actually part of one giant castle which stands atop the plain like a Roman statue overlooking a kingdom. It was originally built for the Annibaldi family, powerful barons during the Middle Ages. Situated between Rome and Naples near the highest point in the area, it was the perfect spot for a military fortress. In 1297, the Annibaldis gave it to Pietro Caetani, the nephew of Pope Bonifacio VIII. Caetani built a series of walls to isolate the tower in case of attack and fortified it with a network of drawbridges.

From the 13th to 16th centuries, it was home to a thriving Jewish community. During medieval times, farmers from the valley sought shelter in Sermoneta to escape foreign invasion. Napoleon sacked it in 1798, and it turned into a prison. It was above a valley that was a malaria-infested marshland until Mussolini turned it into agricultural land and created the towns of Latina and Pontina.


Today, the castle is run by the Roffredo Caetani Foundation and a quaint escape from thoughts of war, ironically.

The Lazio region surrounding Rome is full of villages like Sermoneta. This is where I renew my faith in the world and people smile at you for no reason except you’re a welcome stranger. It’s where every corner offers a new discovery, a new view of a country I love so very much. Many of these villagers don’t know ISIS and don’t care. Terrorists won’t change their lives. They certainly won’t mine.

If they do, they win.