For seven years living in Rome, every time I went near Piazza Augusto Imperatore I wondered when the city would do something about the eyesore behind the construction fence. In that beautiful, upscale zone near the city center, the site was like a bug on a perfect plate of pasta amatriciana. It was your neighborhood’s road construction that never finishes. I often go to the piazza to dig into one of Rome’s best aperitivos at Il Gusto. Via Ripetta borders the piazza and is one of three parallel boulevards forming the Tridente neighborhood. I stroll up Ripetta, gaze at the Tiber River to my left and beautiful shops to my right until it meets the two other streets in half a mile at Piazza del Popolo, massive and beautiful in its historic splendor.

I always averted my eyes from the fence that covers the entire block that is Piazza Augusto Imperatore. Inside I could only see the top of a round ruin, the base of which was hidden by the tall fence and wild foliage. My girlfriend, Marina, said the only living souls who were inside were cats.

Well, the fence has come down. After 14 years, finally, unwrapped like a very late birthday present to the city is one of Rome’s most magnificent historical monuments. It defies architectural logic and reminds Romans daily of perhaps the greatest Roman of them all, the man who laid the foundation that made Ancient Rome the most powerful civilization in man’s history.

The Augustus Mausoleum was built in 28 B.C. in honor of Caesar Augustus, Rome’s first and arguably best emperor in 500 years of world rule. It is 300 feet in diameter and 140 feet high of travertine stone and marble. Its circular, ringed construction fascinates architects to this day. It has gone from inspiring the Pantheon a year later to being left to waste to a castle to a wealthy family’s home to an arena to a concert hall to the historical relic that it resurfaced as this month when it finally reopened to the public.

Along its 2,000-year-old life it has been touched by every important Roman resident from Augustus to the Colonna family to Benito Mussolini. If its circular walls could talk, they could tell you some frightening stories of this city’s history.

“I dreamed of this many times in my life,” Marina told me.

Yes, Rome has waited a long time for this, so long that on March 1, the day it reopened, the earliest open date I could book online was June 21.

However, two weeks ago I latched on to a second media tour just before Rome’s latest lockdown. I joined about 10 area journalists for a guided trip through a structure that has fascinated historians, architects and archaeologists for more than 2,000 years.

But before taking the tour, you should know some important things about Caesar Augustus.

Marina I joined a small group of journalists on a cool windy, gray day. For the first time, Marina laid eyes on the mausoleum that has teased her most of her adult life. Towering above us was a huge, round, cylinder made of white stone. Surrounding it were many of the trees that remained from all the years of neglect. A shallow creek that looked like a small moat wrapped round it.

Augustus made the mausoleum, which would hold his and his family’s ashes, his first project after his victory in the Battle of Actium in 31 B.C. He wanted it built in a Greek-Oriental style which heavily influenced the architecture of Ancient Rome at the time.

It would be the first building of its kind in Rome and he wanted it a landmark that would last forever. It did. He built it in an undeveloped area a mile and a half from the Roman Forum and surrounded it with trees and plants and greenery.

After the fall of the empire in 476 A.D. it fell into disuse. By the end of the 10th century it was buried under dirt and trees. In the 12th century the controlling papal state fortified it as a castle. Later that century the Colonna family, one of the more noble families in Italy, moved in but left in disgrace after the defeat of the Commune of Rome in 1167.

In the early 19th century it was used as a circus ground where animals performed and in the early 20th century they turned the top floor into a concert hall. Mussolini then closed it in the 1930s to preserve it as an archaeological site.

The mausoleum’s return began in 2006 when the city opened an international competition to enhance the monument and the surrounding piazza. In 2016 the 10 million euro restoration, funded primarily by the Italian telecommunications company TIM, began and they did a remarkable job. Gone is the huge bronze statue of Augustus that stood atop the mausoleum that all the citizenry could see.

But of the 140,000 square feet of walls, nearly half are the original stone dating back to 28 B.C. The other half date from the previous restoration in the 1930s. Also planned in hopes to mirror what Augustus first built, the city is planning to build green spaces plus a pedestrian zone and long stairways connecting the street to the site. On April 22, they hope to include visual and augmented reality content to the tour.

We walked down the long pathway to the entrance. It’s an arch about 30 feet high and was originally flanked by two pink granite obelisks.  We passed under the arch and entered the mausoleum’s circular chamber. Originally, the mausoleum consisted of three rings, “Like a Russian doll,” said our guide, Daniela Tollis of the famous Russian souvenir of numerous dolls of decreasing size inside a bigger doll. Inside the final, smallest wall was the center that held Augustus’ family urns.

Along the inside of the outer wall are huge blocks of the original travertine stone that had fallen from the wall. One stood about 10 feet high with a small shelf. It looked like an ancient toilet. Actually, it’s a stand that held one of the family urns. Nearby is one of the Doric columns that decorated the inside.

The mausoleum is very well lit and well signed. Descriptions of the site are written in Italian and English and the natural light coming in through the many windows gives it more of a feeling of life than death.

The inner ring walls no longer stand but the center remains. It’s an opening in a huge cylinder block that looks like the bottom of a broken down silo. The opening inside, like a small, quiet chamber, is where they once held the urns of not only Augustus and his family but also the succeeding emperors Tiberius (14-37 A.D.), Caligula (37-41 A.D.) and Claudius (41-54 A.D.). The urns are all gone, maybe fleeced by thieves who attacked the place over the centuries.

We climbed two flights of stairs, following a brick wall to a modern walkway that wrapped around the site. We passed some iron hooks that once held the animals that performed in the circus shows.

In the center we came across a huge open-air opening that looked with a large, round platform atop a brick base. This was the stage where they held concerts in the 19th and early 20th century. The surrounding room held 3,500 seats and a grainy black-and-white photo from 1874 showed a concert hall that could’ve passed for Rome’s opera house.

Mussolini closed it all. The motivation was one part historical preservation and two parts ego. Mussolini called himself a “reborn Augustus.” His dream was to restore 1930s Rome to its same world status as during the Roman Empire. He wanted the site preserved to form the connection between the empire and 20th century fascism.

Then he blew it all by befriending a guy named Adolf Hitler. 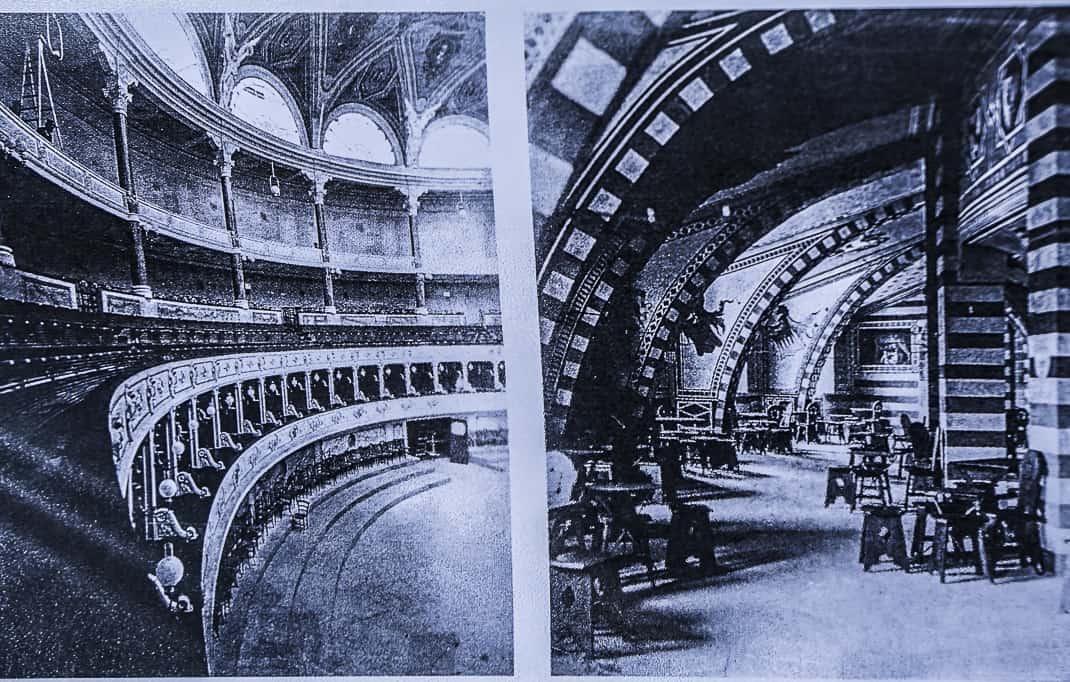 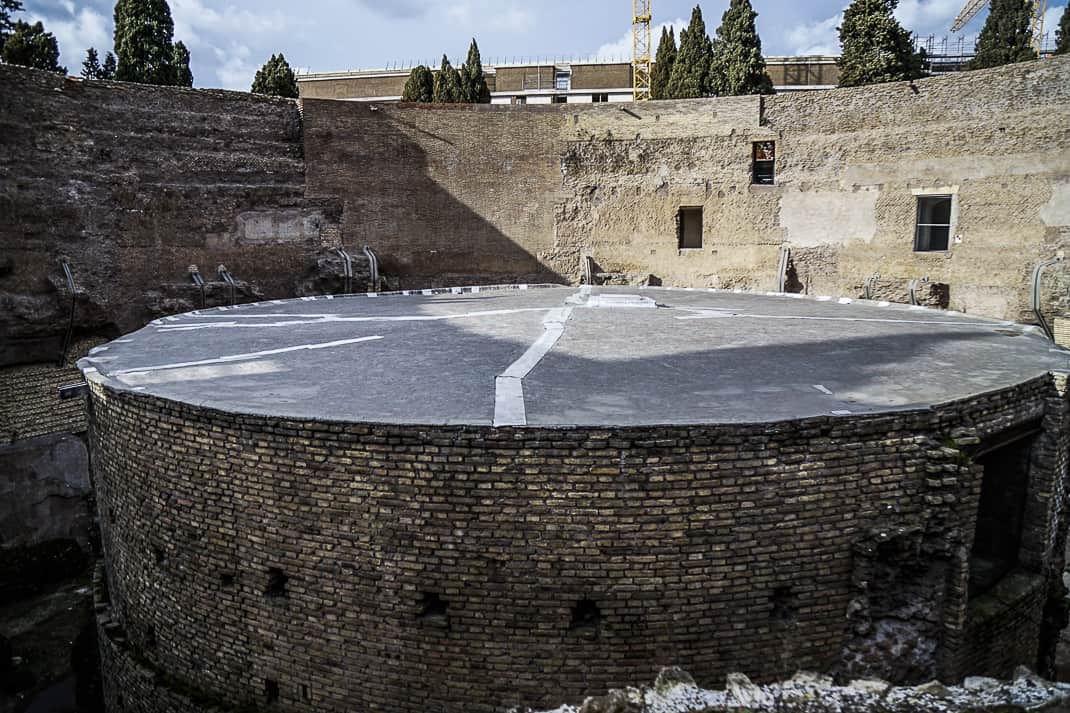 As I walked downstairs the enormity of the mausoleum hit me. Mausoleums are always big. I’ve been inside the Taj Mahal in India and the Great Pyramids of Egypt. The bigger the man’s vision the bigger the tomb. However, the Augustus Mausoleum’s size never struck me as overwhelming when I walked past it for seven years. But inside, I felt very small, as if I stood in the gaping maw of Roman history. I didn’t feel Augustus’ presence but I felt his importance.

That’s what I took away from the remarkable experience as Marina and I discussed later at a bar’s outdoor table across the Tiber. Modern Romans don’t have illusions about their importance in the world anymore. They know their country is a bit player in international politics. But the city will never forget its past, nor its heroes.

Caesar Augustus will always be a hero to these people. Lord knows we can use one right now.

Where is it: Piazza Augusto Imperatore.