Christmas gift list for 2017: Guess who’s been the most naughty and not nice at all 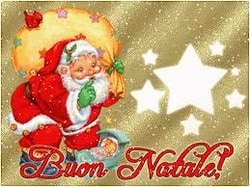 Buon Natale tutti! Merry Christmas everyone from the Eternal City where Santa Claus decided to take up residence this year. Turns out, the North Pole heated up to where that long white beard and big red suit are just too warm. I just saw him walking through Piazza Navona on his way to see his elves in their workshop (they split, too) and I told him many morons, er, people in America think the higher temperatures are just cyclical.

“Cycle this,” he said as he stormed by me.

Well, I followed him and peeked at his gift list for all those naughty and nice. Turns out, the naughty ones are getting the most gifts which is why his first stop will be Washington. No one on Earth was more naughty than that Talking Yam we have in the White House.

So here’s the list. I’m sorry for ruining the surprises but after the year we all had, we’ve had enough surprises:


Donald Trump — A polar bear. Maybe that lone patch of ice that broke off from global warming finally melts under him and he comes knocking on the Mango Mussolini’s front door. I hope the bear likes Cheetos. How does that Paris Accord look now, you Fanta Fascist?

Tiber River — Cats. It will need them after Rome mayor Viginia Raggi launched a campaign to build beaches along the Tiber nest summer. Rats do the breaststroke in that filthy river.

Italian soccer — Straitjackets and a chair. Make Italy’s biggest embarrassment since Silvio Berlusconi watch next summer’s World Cup without them. They can watch Iceland. They can watch Panama. They can watch Sweden, the team that knocked them out like a pack of choking, rabid dogs.


U.S. soccer — Orange slices. Isn’t that what American kids get after games, win or lose? So what if the U.S. lost to Trinidad & Tobago to prevent them the World Cup? There were treats afterward!

Pope Francis — A seat in the U.S. Senate. I want to see how the Cheeto Benito and his pack of Nazi Republicans react next time they discuss tax cuts for the rich and he quotes, again, St. John Chrysostom: “Not to share one’s wealth with the poor is to steal from them and to take away their livelihood. It is not our own goods which we hold, but theirs.”


Giuseppina Projetto — A Perugina chocolate endorsement. The world’s oldest person, a 115-year-old Sardi now living near Florence, said her secret is she swears by chocolate. If chocolate’s the secret to a long life, I may some day challenge her.

Roy Moore — An Alabama prison cell. Wait’ll he starts spewing gospel on the heels of his sentence for molesting underaged girls and it reaches his cellmate, Sweet Cheeks.

Fox News — Leashes. That way, Adolf Twittler can take its reporters for walks after they finish interviewing him while sitting on his lap.

A.S. Roma — A scudetto. A fourth national Serie A title would turn my Testaccio neighborhood, where the team formed in 1927, into the club’s week-long party headquarters. I want to dance under the lights of Chiesa di Santa Maria Liberatrice. And I hate to dance.


Bolt — 50 euros. That’s my present to the little dying kitten Marina and I saved, unconscious against a curb on Skiathos, Greece, 16 months ago. He’s alive and well at the wonderful Skiathos Cat Welfare Association.

National Rifle Association — Knives. They’re just as effective as guns. You just can’t kill as many people with them. But then, it takes courage to use a knife. Maybe this isn’t a good idea. They’d all return them, wouldn’t they?

A.C. Milan: A red sailboat. That way it can disappear when it sails away into obscurity on its sea of red ink. The club has suffered 265 million euros in losses over the last three years and face UEFA penalties for blowing the 30-million euro limit right out of the water. Milan spent 200 million euro last off season and for that it has an eighth-place standing out of 20 teams, 18 points out of first, at 7 wins, 3 ties and 7 losses.


Vladimir Putin — Three rounds in the octagon with Cyborg. This year he decriminalized domestic violence if it doesn’t cause serious injury. I wonder how much he has kept up with his judo.

Donald Trump — A Trump Tower in Puerto Rico. Then who is Genghis Can’t going to complain to when he can’t turn on the lights?

Starbucks: A paper shredder. The coffee company that has ruined more neighborhoods than World War II is opening stores in Milan and Rome next year with 300 more planned. They’d better get rid of the paper cups that its army of customers parade around towns holding. Italians only drink out of ceramic. Italians think drinking coffee in paper cups is strictly “schifo!” (disgusting!)

Rome soccer fans: Tickets to a Cleveland Cavaliers game. Let’s see the reaction they get when they start making monkey sounds at LeBron James.

Me — A sweater. The 550-euro city-mandated valves work great on my three radiators — if I lay on them naked. My apartment is freezing.


Marina Pascucci: A dog-eared passport. My girlfriend, my fidanzata, my travel partner, my reason for living, may we always have the wind at our backs and the sun in our faces as we travel the world together, forever. Ti amo, dea.