Christmas in Paris: A somber look at its darkest day since World War II


PARIS — Christmas in Paris takes romance to a level higher than the Eiffel Tower’s needle top could ever reach. It’s called the City of Light for a reason. When in winter the city begins to darken at 4 p.m., Paris lights up. Christmas lights are strung across glamorous boulevards. Dark, cozy restaurants are lit by fireplaces. The Eiffel Tower, the world’s most beautiful man-made structure, seems like France’s Christmas tree.

Many expats leave Rome for the holidays and Paris has a running battle with Rome as my favorite city in the world. However, this Christmas fell exactly six weeks after Paris died a thousand deaths and a world wept for it. It was Nov. 13 when Isis terrorists, the new Nazis, killed 130 people in attacks around the city. I remember sitting in front of a TV looking at white tarps pulled over bodies in alleys I’d walk down the next month. I saw the backlash toward Islam by racist, fascist, geographically moronic U.S. presidential candidates and Paris all but closing its doors.

By the time I arrived on a cool, overcast Dec. 24, the security I thought would turn Paris into a locked closet was hard to find. I saw no soldiers at Orly Airport. None was on the subway I took to my hotel in the Latin Quarter. Near one government building I saw some very young soldiers in camouflage toting machine guns in their black-gloved hands. That was about it. Rome is worse. Then again, Rome is reportedly on Isis’ to-do list.


On Christmas morning, I threw myself into France’s deadliest day since World War II. I hate to call it a “Ghoul Tour.” They do those in Hollywood. However, they’re distant, isolated incidents tied together by the vague concept of fame. Seeing where actors and rock stars overdose is not the same as seeing where a student was gunned down while watching a concert or an ad executive was shot to death before she finished her glass of Bordeaux at a sidewalk cafe.

The Bataclan Cafe, the theater where 89 people were killed, is in the Le Marais neighborhood. Located on the Right Bank just north of the Place de la Bastille, the 14th century fortress, Le Marais is an outdoor history lesson. The Musee Carnavalet has period rooms dating back to prehistory. Memorial de la Shoah tells about German-occupied Paris. Joining them for an eternity will be the Bataclan.


I arrived on another cool, crisp morning. The Bataclan is on Via Voltaire, a major boulevard lined with shops and cheap ethnic restaurants and divided by a daily public market. A guardrail and two security guards carrying machine guns next to their police wagon greeted me as I walked by the long front window covered by a black and gold awning. The coffee menu is still visible inside the window. (An espresso only 1.50 euro). A couple other passersby stopped but local pedestrians and motorists drove by as if Bataclan had merely just closed for Christmas.

I walked past the armed guards and turned the corner. Looking down the empty alley I could still remember seeing on the TV screen the bodies of those victims who couldn’t quite escape. Little candles spotted the side entrance where the victims fled and then fell. Two French flags fluttered from apartment windows a few doors down. Even at near noon, the alley seemed as dark and cold as a New Jersey ghetto on a winter night. 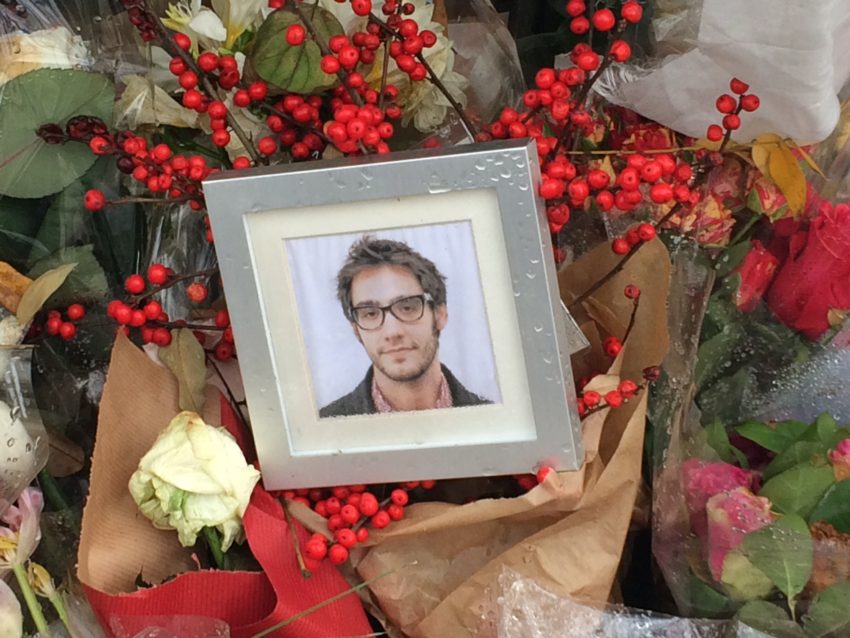 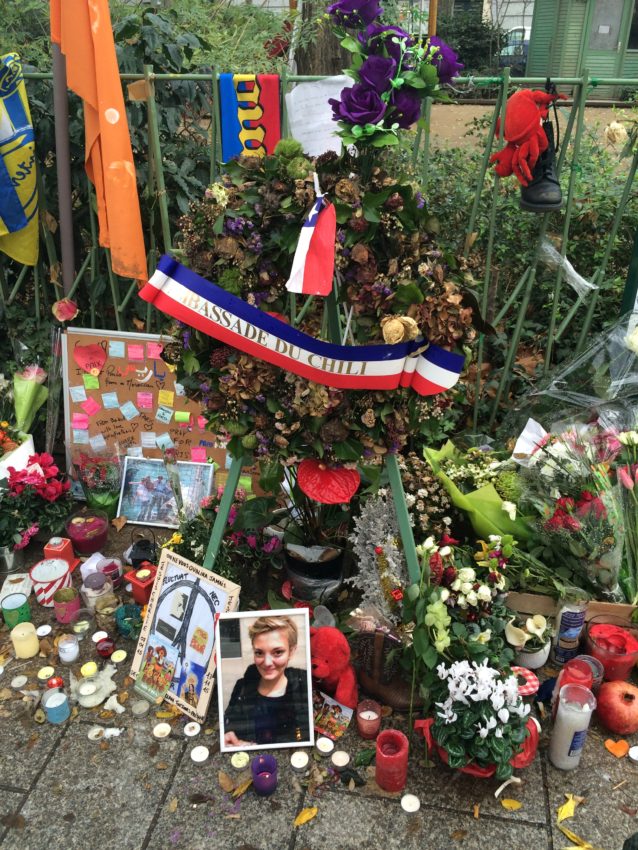 Turning back, I saw people paying respects. On Voltaire’s island divider was a long line of tributes to the dead. Tulips of every color. Flags from dozens of countries, including Muslim nations, hung from the fence. A picture of young blonde woman, her short hair and pixie smile making her look like a teenager, stared up at me from a bed of candles. A plain black and white sign reading, in English, “BLOODY FRIDAY” hung over a row of Hindu prayer flags. A Moroccan soccer banner rested on ivy. The new symbol of the attacks, the Eiffel Tower in the shape of a peace sign, was everywhere.

A tall 40ish French woman with long curly blonde hair, stood up from examining photos and held her hand to her mouth trying not to cry.


The magnitude of the attacks didn’t hit me until I walked to the nearby 19th century landmark, Place de la Republique. Dominating the square is a 30-foot statue of Marianne, the symbol of the French Republic. Not at all ironically, she holds an olive branch and is surrounded by statues representing liberty, equality and fraternity, the foundation of France.

The statue’s sits atop a 75-foot monument, the base of which is covered with tributes: The lyrics to John Lennon’s “Imagine.” A sign reading, “The biggest power is not the weapon but the prayer.” A photo of a Middle Eastern woman wearing a headband in France’s red, white and blue colors. The most jarring symbol was the pile of shoes — loafers, women’s flats, sneakers — gathered from the dead.

Two of the shoes had blood stains.


I have a different reaction that most. Sad? Yes. Angry? More. Our 2003 invasion of Iraq helped create Isis, and some U.S. Republican presidential candidates’ ideas of blocking Muslims from entering the U.S. could become Isis’ biggest recruiting tool. Although Isis attacked Paris for France’s attack on Syria, I wanted to apologize to every Frenchman I met for my country’s part in it.

The next day I experienced tragedies from a different time. One of Paris’ most underrated museums is the Musee Europeene de la Photographie (European House of Photography). Currently it has an exhibition of photographers who had captured tragedies and struggles from every corner of the world. A photo team named Andrea and Magda chronicled the raging effects the war on terrorism has had on tourism. Skeletons of half-finished hotels on Egypt’s Sinai Peninsula looked like something from a post-apocalyptic landscape of a metropolis turned to desert.

Frenchman Bruno Barbey has chased wars and civil strife since Italy in 1962. He tells a thousand words with his 1991 shot of a truck load of American soldiers returning from a battle. In the background are dozens of oil field fires in Kuwait, all set by Iraqi leader Saddam Hussein. On a softer scale, French-Moroccan photographer Leila Alaoui returned to her roots with “Les Moarocains,” giant portraits of Moroccans, all in native garb. 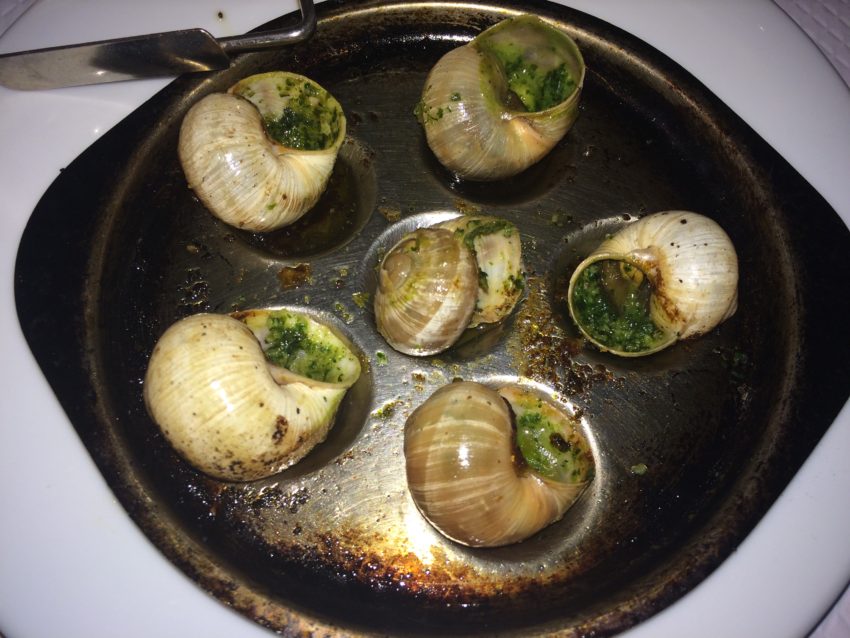 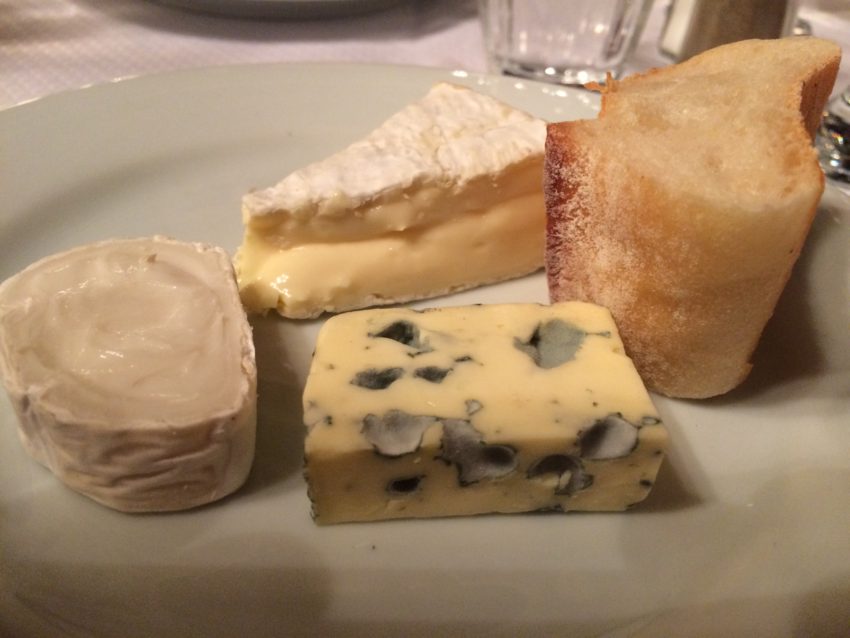 Not all of Paris was morbid. Take any Paris eatery. I knew getting a restaurant reservation wouldn’t be a problem. Every Frenchman I met said tourism was way down, even for a dead period like Christmas. I ate, as I always do in Paris, like royalty. I took advantage of Parus’ plethora of ethnic restaurants: Cambodian, Lebanese, Vietnamese. I ate duck in restaurants decorated like houses in the French countryside. I bought a bag of coconut truffles. And, of course, I renewed my crack-like addiction to chocolate croissants.

Paris will be back. And so will I.