Christmas in Rome: Lighter on the lights but heavy on the meaning

(Editor’s note. While I’m away for the holidays, I am re-running my blog on Christmas in Rome from four years ago.)

I grew up in the capital of the commercial world and now live in the capital of the Catholic world. It is Christmas time, a time when capitalism and religion merge into a big, sparkling Christmas ball — a green Christmas ball. Comparing Christmas in Rome to Christmas anywhere in the U.S. is like staring at the moon compared to staring at a spotlight. I never get tired of staring at the moon in Rome. Every night it sits above the Tiber River across the street from my terrace, like a big wheel of mozzarella cheese. Stare at a spotlight long enough and you’ll go blind, kind of like looking at Christmas lights that have been up since before Thanksgiving.

Christmas in Rome is one of my favorite times of year. Keep in mind, my nearest family member is 8,000 miles away. I have no family ties. I have no religious ties. It also isn’t because this is the slowest month for tourism in Rome and I love the emptier streets and seats on public transportation. I can’t remember the last time I saw a tourist in a white fedora walk bewildered onto a bus with a map in his hand.

It’s because Rome has a much subtler approach to Christmas. Christmas here has meaning. It goes beyond the dollars people make and the gifts people receive. It goes back to Christmas’ roots, where the birth of Jesus Christ is celebrated and not the birth of iPhone 7.

It’s a remarkable focus considering Italy and the modern church. Outsiders don’t know this, but Romans are not terribly religious. As a whole, neither are Italians. The Catholic Church’s grasp on its world is much tighter in places like Brazil and the Philippines than its own neighborhood around the Vatican. In the most recent survey, according to the global research project, World Values Surveys, only 31 percent of all Italians go to church regularly. I have only one Italian friend who goes to church every Sunday. Italians fought the church for faster divorce and got it in 1987. This year the time needed has dropped from three years to six months. Abortion became legal in 1978. You can buy condoms in every pharmacy in the country.

Yet in December, Christmas is treated like a religious holiday and not a commercial one. I never had problems with commercializing Christmas. I love to give. In my family, which over the past 40 years only gathers during Christmas, we had so many presents under the tree you could barely enter the living room. We’d take a break halfway through to eat coffee cake left over from breakfast three hours before. By the time the last present opened, the afternoon Aloha Bowl football game in Honolulu was half over.

However, I became jaded in America over hearing “Jingle Bells” while shopping for the usual Cornish game hen I made myself every Thanksgiving. I tired of watching neighbors one-upping each other with Christmas lights that made Caesars Palace look like the Bates Motel. And hanging a mistletoe over your ass was funny the first time. Not anymore.

In Rome, the only way I knew Christmas approached was the simply decorated Christmas tree in front of my neighborhood church, Chiesa di Santa Maria Liberatrice. Saturday night, however, I took a tour of Christmas lights in what I believe is the most beautiful city in the world. Guess what, folks. At Christmas, Rome is even prettier.

On a crisp but pleasant night in the high 40s, I started at the Spanish Steps. It is closed off for renovation but the Palazzo Valentini in nearby Piazza Mignanelli is doing a nice job filling in. The palace, built in 1873, is covered in white Christmas lights, making the yellow building look even softer. With the two-story high Christmas tree in front, the piazza is the perfect spot to hold hands with a loved one.

Running perpendicular to the piazza is Via dei Condotti, Rome’s Fifth Avenue, Rodeo Drive and Avenue Montaigne. Name an Italian clothes store you can’t afford and it’s on Condotti. Prada. Gucci. Bulgari. They’re all there, as well as most other name brands from around the world. Sets of white lights spanned, like little bridges, the narrow pedestrian street to the end four blocks away. Dior filled its display window with purple, green and yellow Christmas balls. Moncler, the French boutique clothes store, sported a small ski display. In front of Fendi, the Italian luxury fashion house, is a tree entirely decorated with ornaments resembling red, green and yellow purses. 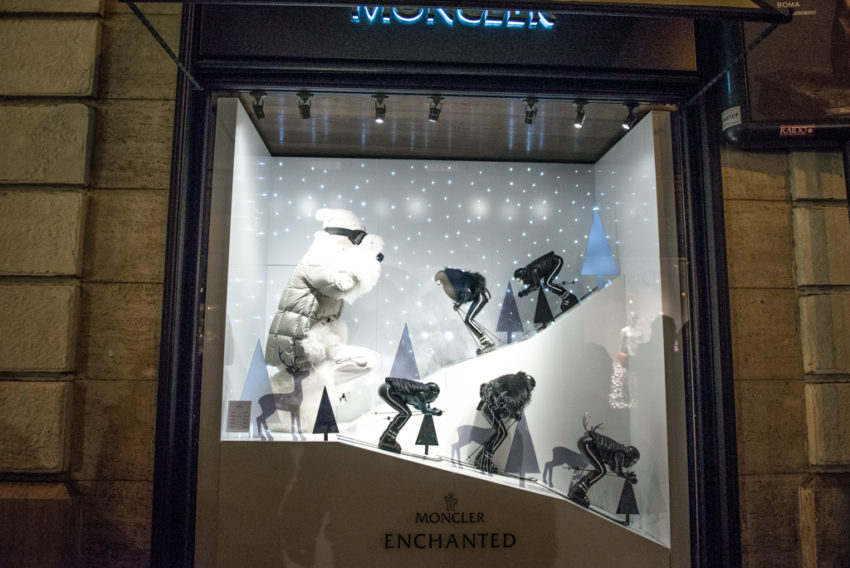 Rome may be the world’s best city for walking and it’s even better during Christmas. The busy shopping streets are closed to traffic and the city’s masses hoof it seemingly all night. On the way down Condotti, I passed Bangladeshis huddled against the cold selling roasted chestnuts which filled the air with that smoky aroma. I turned down Via del Corso, one of the busiest streets in Rome but half of it is closed to traffic. The entire length of the street reaching all the way to the giant white monument honoring Italian unification, Vittoriano, is lined with big white Christmas balls. It wasn’t ostentatious. It wasn’t colorful. It was just simple and bright.

The lights basked a nice glow on the Bulgarian trio playing “Jingle Bells” and other Christmas carols on their bass and guitars. Outside the Galleria Alberto Sordi stood a replica of a giant Christmas present made of red and yellow Christmas lights.

At the end of the street, the gargantuan Vittoriano is louder than anything in Rome. Called the Birthday Cake and Mussolini’s Typewriter, it towers over Piazza Venezia like the gates to heaven. In front of it, standing in the middle of the massive piazza like the Little Drummer Boy before Jesus is a Christmas tree decorated entirely in white lights with a star atop it. It’s beautiful in its simplicity.

A bus ride across the river, St. Peter’s is already the most beautiful church in the world. Perpetually back lit at night and lined with a semicircle of Bernini sculptures and fountains, St. Peter’s is a must stop for any night stroll in Rome. Over Christmas, the Vatican, already the epicenter of Christendom, does not overdo it. It follows the long-honored Italian tradition of building a nativity scene, or presepe in Italian. In the middle of the piazza, in front of the 80-foot obelisk placed there by Caligula in the 1st century A.D., is a two-story dwelling from old Bethlehem, complete with people and animals going about their day. The Vatican doesn’t awe me. But its art does.

The next night I got into the Christmas spirit a little more. I attended a classical Christmas concert. I’m into music almost as little as I’m into religion but when an Italian choir plays Christmas carols with classical music, I must listen. It was in the beautifully underrated Parrocchia di Santa Maria in Via, just off Via del Corso. Built in the 15th century, it is lined with chandeliers. High candles lit up the nave behind the finely dressed chorus. I joined a standing-room only crowd as they played Handel and Bach and Mozart. But along the way, we heard, “O Come All Ye Faithful” and “Little Town of Bethlehem.” Only Bing Crosby could’ve sang them better.

I won’t be in Rome Christmas Day. I’m going to Paris. Many American expats with no family here get away. But I’ve experienced many a Rome Christmas and even alone I know what it means.

It’s a joy to the world.