Colosseum Underground: The scariest place on Earth during the Roman Empire

I picked the hottest day of the year to spend two hours in a 2,000-year-old stadium made of marble, limestone and brick. The only thing missing Wednesday was the sand that covered the surface of the Colosseum when it was the Roman Empire’s center for bloodshed, revenge and political satire.

If I was a gladiator back then, forget the starving wild animals, the desperate prisoners of war and skilled fellow gladiators trying to earn their freedom by slitting my throat. I would’ve died of heat stroke before I raised my ax.

Rome Wednesday hit 100 degrees. However, I found sanctuary in the one place that scared the gladiators almost as much as the Colosseum stage itself. I was in the Colosseum Underground. This is a 15,000-square-meter labyrinth of passageways, tunnels and holding areas that served as the backstage of what took place later in the arena.

This is the hottest ticket in town and not because inside the Colosseum I felt like a Honey Bun. The Underground opened June 26 and despite tourist numbers only trickling back to Rome I spent three days with the help of a well-connected guide to land two tickets.

The city unveiled the part of the Colosseum that for years we’ve read about in books or heard about from tour guides. This is where the gladiators waited, wondering if these were their last hours on Earth before they lost their battle above. This is where they kept the wild animals, starving them to where they’d tear apart any live flesh before them. This is where 400 workers cranked the 80 elevators, prepped the livestock and supplied the Colosseum to make the day enjoyable for the Romans and their children.

It’s a remarkable insight into the pulse of the Roman Empire’s evil heart. This was the most powerful empire in man’s history, one that stretched from what is now England to Iraq. The Roman army was feared from seas to deserts, and bloodshed was its currency. It all centered around the Colosseum, a 70,000-seat amphitheatre completed in 80 A.D and used until the 5th century. It was the grandest of its kind in the world and the model for sports stadiums for the next 2,000 years.

My time as a gladiator

Going to the Colosseum on that steaming Wednesday afternoon, I knew a little about gladiators. In my first stint in Rome from 2001-03, I became a proud graduate of La Scuola dei Gladiatori, The Gladiators School.  True story: Yes, Rome has a gladiator school. A group of Roman historians train locals and tourists alike to fight like gladiators. We used real weapons, although the points and blades were soldered over for more safety. We wore authentic uniforms. We held gladiator battle exhibitions all around Rome.

It started as a magazine story and book chapter and I wound up spending two months in the school, learning to skewer a lower intestine like link sausage with one swift forward thrust. In one show I was a Praetorian guard and had the distinction of dying in front of about 1,000 locals in a small Colosseum in Sutri outside Rome. I was scolded later that dead guards lying on the ground don’t keep pulling their one-size-fits-all tunic over their underwear.

Besides knowing I could hold my own against Russell Crowe in a sword fight, I learned a lot about the life of the gladiators. First, the movie “Gladiator” wasn’t nearly as violent as the reality. Roman emperors used gladiator games to earn favor from citizens. And the only thing Romans had a bigger thirst for than wine was blood.

Second, the more bloodshed, the more infatuation. In Ancient Rome, courage was worshipped. According to Daniel Mannix’s 1958 book, “The Way of the Gladiator,” prostitutes would station themselves in dark recesses of the Colosseum to service men turned on by the violence.

And there was plenty.

Their methods were gruesome. When they’d capture a criminal or brought back a prisoner of war, they’d sometimes put him next to a starving bear and tell him to play a musical instrument like Morpheus, the Greek musician whose sweet music, they said, could tame the wildest of animals. Of course, the condemned sap butchered the song and the bear ate him alive, much to the delight of the mob in the stands.

Before the Colosseum was built and games were held on the Vatican grounds, Emperor Nero would pierce Christians with long poles, blaming them for the great fire of 64 A.D. He’d have them covered in pitch, set them aflame and stick the poles high in the air. The flames could be seen all over town. The screams could be heard just as far. Being the cynical cus that I am, I wrote that they likely were the first night games in sports history.

So Wednesday afternoon I found myself in the bowels where these doomed souls once prowled.

Meeting Marina and me was tour guide Nadia, a protege of Massimiliano “Max” Francia (guideromax@virgilio.it), the best tour guide in Rome. The two lines of about 50 people moved swiftly. Nadia showed our tickets. We showed our green pass vaccination certificates on our cellphones and we entered the Colosseum, the same way I have about half a dozen times over the years.

For my first time, however, I walked to the far end and took three flights of modern stairs down to a long hallway. It stretched between 20-foot walls of brick, tufa and travertine limestone. These are the original walls and they didn’t look 2,000 years old. They looked about two. The travertine was spotless. It wasn’t covered in black soot from the pollution on the outside walls facing the streets that Colosseum workers are continuously cleaning.

It was cooler in the shade but as Nadia explained the purpose of the Underground, I began to sweat again. The Underground has long hallways with high arched ceilings stretching 20 feet to the platform above. As I walked, I tried imagining myself walking with sword in hand, breastplate and helmet, listening to the sounds of battles above. I’d roam the same hallways, waiting my turn.

Meanwhile, in another part of the Underground, we passed large carved-out niches in walls. This is where they’d keep wild animals, caged and waiting to be unleashed on some unsuspecting slave, prisoner of war or military traitor.

But 2,000 years ago Celio was home to the gladiator barracks and their training area. Celio also had the pens where they kept the animals. They all stayed there until the day before their time in the arena, when they were hauled across the street.

Also in Celio, ominously, stood a hospital and morgue.

So how did they get the animals and slaves from the Underground up to the arena? That’s the star attraction of the Underground. Before electricity, the Romans designed a man-managed elevator. It consisted of a large cage and ropes with counterweights hanging off the side. The eight workers would crank a wheel attached to the stage which would lift the animals or gladiators to the arena.

Another larger stage in the middle of the Underground, known as Galleria H, hauled the bigger animals such as elephants and giraffes. Yes, giraffes.

The original elevators are gone, but an engineer came to the Colosseum and built a replica. It’s quite ingenious and not a small bit frightening. I kept thinking of the story I read doing gladiator research of the lion cub who was let loose on a woman who had committed some capital punishable crime. The cub couldn’t kill the woman but the woman couldn’t break free of the cub’s jaws in her tunic.

The mother lion came and finished her off.

The animals were treated like slaves, too. Their pens were too  narrow for them to turn around, Nadia said. They were starved, just to make them hungrier when they saw their prey in the arena. Marina noticeably grimaced.

“If you love the animals,” Nadia said, “this is not an easy tour.”

Curiously, we saw water in some parts of the Underground. Nadia explained that Labicano creek came from San Clemente Basilica, about 300 meters away and the same vein of water from 2,000 years ago and is still part of the sewage system.

We took another narrow staircase to the open arena. 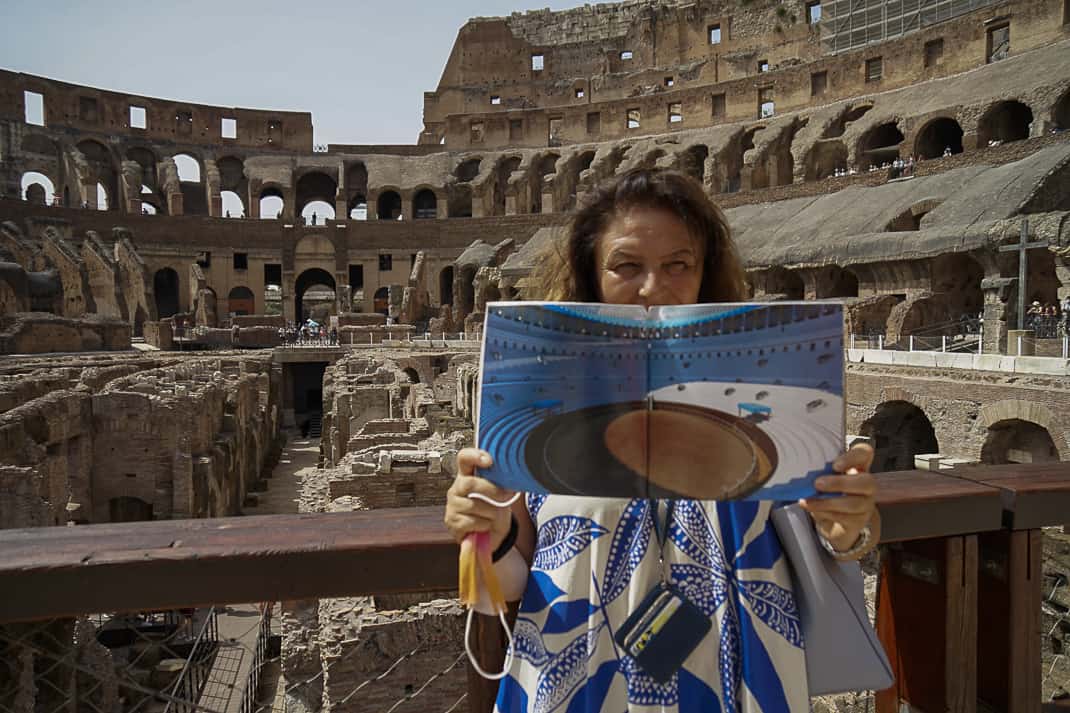 Brilliant, burning sunshine greeted us. The crowds weren’t huge. The city does an excellent job of limiting the numbers, particularly of the Underground where the passageways could get very claustrophobic. Only one other tour group went down with us.

In the arena, I saw the things I’d seen many times before: The black and white VIP seats in the first of five rows of stands. The tall brick columns that served as the foundation for the arena stage. The altar placed in the 18th century when the Colosseum was used for religious purposes. And, of course the tall cross Benito Mussolini put inside in 1926 to inaugurate the Colosseum’s renovation and to welcome Pope Pius XI.

However, it was Marina’s first time inside the Colosseum. She has lived in Rome all her life and had never been inside the most visited monument in Italy. It’s like a New Yorker who’d never been to the top of the Empire State Building.

“It’s very impressive,” she told me. “But the Romans were huge shits because they laughed at the animals seeing them suffer. In short: Disgusting.”

The rest of the tour, Nadia showed us a series of displays, ranging from a big wooden model of the Colosseum built in the 18th century, to bones of horses and deer and wild boar found after the last games in the 5th century A.D. There were shells, chicken bones and fragments from wine bottles, leftovers from concession stand food.

Display cases had oil lamps which spectators used to maneuver through the Colosseum’s darker corridors. Little round pieces of stone, part of a gambling game, were found indicating the gladiators weren’t the only form of entertainment in the Colosseum.

(Gambling side note: In Ancient Rome, gambling was huge. Massive amounts of money were bet on gladiators. Emperors felt it helped fuel the economy. It’s why when two highly popular gladiators fought each other, it often wasn’t to the death. They wanted the loser to fight another day. However, if a highly popular gladiator was a prohibitive favorite against a slave or prisoner of war and was losing badly? And the mob was about to lose their money?

His body inevitably was dragged to the morgue.)

Originally excavated in the 19th century, the Underground is the second of a three-phase 25 million euro renovation project of the Colosseum, financed by Tod’s, the Italian fashion house. The first phase cleaned the Colosseum’s entire facade. The third phase is the restoration of galleries and the lighting system plus adding a visitor’s center. That should be completed in 2024.

For this second phase, 80 archaeologists, architects and engineers came here two years ago “to bring back to the center of attention a monument that the whole world loves,” Tod’s chairman, Diego Della Valle, said in The Guardian.

By 2023, the city also wants to reconstruct the entire arena floor for concerts, cultural events but, alas, no visits are planned from La Scuola dei Gladiatori. They hope to have a retractable roof similar to those on modern sports stadiums in the U.S.

Yes, gladiator games were considered sport 2,000 years ago. After seeing those games from the inside out, it’s one sport I’m glad I never covered.

If you ever want to go …