Here in Italy we have become Europe’s red-headed, deformed stepchild. We are shunned, ridiculed and home bound. The Coronavirus has turned all 60 million of us into passengers on one giant cruise ship. We’re sitting motionless with no port accepting our wretched, damned souls.

I myself am quarantined. Yes, it happened to me. Since returning from Saudi Arabia last Friday, I have not left my neighborhood except a Saturday night jaunt to my girlfriend’s four miles away. I have only left my home three other times: once to go to a hospital emergency room, once to a private clinic and once to email my Democrats Abroad ballot at my corner Western Union office. On my short walk to the corner, I fell flat on my face.

I have a terrible illness. I’m in pain. I’m worried. I’m struggling with a restricted diet. I’m taking more pills than a Hollywood housewife. The Coronavirus has affected 3,800 people in Italy and killed 148. Forty-one died Thursday.

Fortunately, my illness is kidney stones.

As it turns out, I couldn’t have picked a better time to contract an illness that prevents me from walking without risk of falling like a house of cards. I am the last person in Italy who could contract the Coronavirus which has put my adopted country in world headlines and the crosshairs of other countries’ immigration policies.

My left side is terribly weak. It feels like I had a stroke without the speech difficulties. With the inability to walk without feeling like I’m one step away from making a public arse of myself, I’ve been homebound. I’ve continued researching Saudi Arabia, read, cooked, watched Netflix and “My Brilliant Friend” and tried finding a sitting position that doesn’t cause pain. I have had contact without almost no one.

However, the self-incubation hasn’t prevented me from seeing what’s going on around me. Italy has become a growing petri dish of germs. Keep in mind the high numbers are also due to the excellent Italian state health service that has tested nearly 17,000 residents. According to The Atlantic, fewer than 2,000 have been tested in the U.S. But to summarize: 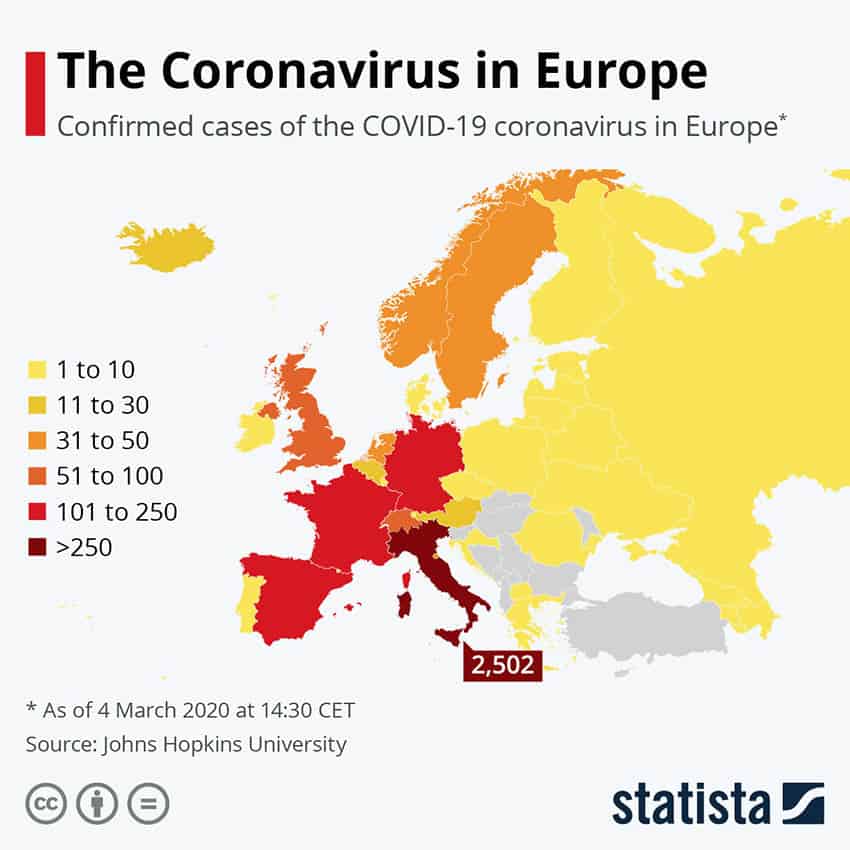 The economic impact has been massive for a tourism industry that makes up 13 percent of Italy’s gross domestic product. An estimated 10 million tourists cancelled travel plans to Italy. Of the 4.5 billion euros expected lost during this period, 3.2  billion come from Lombardy, Veneto, Tuscany and Lazio, where Rome is the capital.

Here in Rome where only a  handful of people have contracted the virus, business is down an estimated 70 percent. Ninety percent of hotels and travel agencies report cancellations.

Rome hasn’t been this deserted since the fall of the Roman Empire. The only difference is the conquering Goths and Vandals wouldn’t come near this city now. The streets are void of tourists in Yankee hats and tour guides carrying little flags.

One report said the Colosseum had no lines when they usually stretch more than 100 meters. You could count the number of visitors to the Forum on two hands. A fellow AS Roma fan who watched Sunday’s game at Cagliari from our Abbey Theatre Irish Pub said only about 10 fans were in the room and the usually bustling bar “was hurting.”

Tourists aren’t cancelling just for fear of catching the virus. They’re frightened of being quarantined once they return home.

Marina and I have our own fears. On March 28, we’re scheduled to fly to Asturias, a beautiful, lightly trodden region of northwest Spain, for my birthday. We have until March 20 to cancel our hotel for a full refund. What if Vueling and Iberia, the two Spanish airlines taking us to and from, join the long line of above airlines to cancel flights to and from Italy? Vueling said it will give us a full refund. But what if it does it at the last minute and the hotel charges us anyway?

Marina is worried about Spaniards taking out their anger on us, as if we’re all carrying the bubonic plague. I’m not worried. The Spanish aren’t like that but it’s tempting to cancel it all now and just take a road trip to another part of Italy’s giant quarantined ship. But would the airline reimburse us if it doesn’t cancel the flight? No.

Our friends aren’t panicking but no one knows where Coronavirus is going to lead in Europe’s most affected country, where more than 40 people died in one day. One Rome hospital is treating seven people with the virus, including the Chinese couple who were the first in Italy to catch it. On Friday, a patient in the Vatican hospital tested positive and the hospital was temporarily closed to be disinfected. The priest at Chiesa di San Luigi dei Francesi, famed for its three Caravaggio paintings free for viewing, contracted the virus.

In Saudi Arabia, I had a mild argument with a Spanish traveler who pooh-poohed the virus for a 2-percent fatality rate that’s no worse than the common flu “and no one is freaking out about the flu.” True. However, 2 percent of tens of thousands of potential patients is a lot of people. Also, there is a cure for the flu.

Coronavirus has no cure.

Here in Italy we are like the extras in the first scenes of a disaster movie where an unknown, mysterious virus begins to spread around the world, turning friends and family members into slobbering, bleeding zombies. Tents are set up outside hospitals to keep the infected from infecting patients inside.

The measures the Italian government is strongly suggesting are right out of a science fiction film: No double-cheek kissing. Stay at least one meter away from everyone. If you suffer mild virus symptoms similar to the flu, stay home. Anyone over 75 stay home. Don’t share drinking glasses.

Marina accompanied me to the clinic Wednesday. I’m going to a specialist for another exam Monday. She is no longer allowed to come. Italy’s medical centers will no longer risk it.

I never thought I’d ever say I’m lucky to have kidney stones but I do. I could be in a hospital bed hoping mankind finds an antidote before I die. Instead I’m sitting at my laptop behind closed doors trying to get down three to four liters of water a day. Seals don’t need this much water.

Kidney stones are nasty and they hit me as if I got knifed. I took the train back from Marina’s Sunday morning and as I left my station for my walk home, I felt this surging pain in my back. It’s similar to when you’re lifting weights and have bad form on one rep. It’s debilitating. I thought I’d done it the day before in my first gym session the day after I returned from Saudi Arabia. Impossible. I did only some bench press and my usual interval workout. I always take it easy my first day back.

But as I walked home it got worse. I had to make two big-time, NBA-level jump stops to gather enough strength to continue. To walk the usual 10-minute route home, it took me more than 20 minutes.

I laid down on my couch. Pain shot up and down my left side. I went to the gym to stretch. That made it worse. A trainer said if it doesn’t go away by the next day, go to the emergency room.

I didn’t last the next hour. I went to the emergency room. However, Marina had to drive me the three blocks to the hospital. (The older I get, the closer I seem to live to hospitals.) At San Camillo, one of the best public hospitals in Italy, they interviewed me, took blood, gave me an ultrasound and diagnosed it. (Note to Republicans who say socialized medicine will lead to the fall of mankind: My total bill for an entire afternoon in the emergency room with the above treatment was … ZERO!)

Kidney stones. But they were small, so small they’re like sand. They said they may have come from the Saudi Arabian tap water I read was safe to drink but really isn’t. All that sand I saw floating in the air above Riyadh? That must have reached the city’s water supply. I took two sips to down pills. That’s it.

I was told the stones should flush out of my system naturally, as long as I intake more water than your average sperm whale. The doctor at the private clinic where I had a regularly scheduled prostate checkup Wednesday did an ultrasound and said one stone is in my kidney. That’s not dangerous. Another stone, however, is in a tube and, depending on its shape, will either leave naturally or be a major problem. Another clinic Monday will try to identify the stone. He told me my lone dietary limitations are no chocolate and no beer.

There goes my trip to Belgium.

Meanwhile, I am staying home, safe and sound from the more mysterious Coronavirus and drinking so much water I have dug an indention in the tiles leading to my bathroom. My urine is now the color and general makeup of bottled water in Norway.

So have no fear, dear reader. We’re OK. We’re going nowhere, sealed in our self-contained peninsula where no one wants to visit with us, meet with us, talk with us. Fine.

More pasta for us.