Coronavirus in Italy: Some improvement but death still haunts

My girlfriend, Marina, finally started working from home Monday. I could hear her exhale as she left her office near the Vatican two miles from my apartment. She no longer works around elderly men, the favorite target of the coronavirus that has laid waste to much of the world. Nowhere has it run more roughshod than it has here in Italy where our 7,503 dead is more than twice as many as China, second on the list and where the virus began.

The world is watching us.

It looks to Italy as its guiding light. It wants to know if the draconian sanctions prime minister Giuseppe Conte laid down two weeks ago will help kill what Rome newspaper Il Messaggero has labeled “the invisible monster.”

I have been interviewed by ABC News, a radio show in Portland, Ore., a journalist in Oklahoma City and a columnist in Colorado Springs. My nightly statistical updates of Italy’s infected and dead are getting a huge response. I feel like Walter Cronkite during the Vietnam War.

Meanwhile, I am watching Marina. Unfortunately, I can’t watch her in person. The latest of three edicts laid down Tuesday is no one can leave their house for anything other than: 1, work; 2, a necessity such as the grocery store or pharmacy; 3, visits to a hospital or clinic.

Sex is still nowhere to be found.

Since March 8, our lone contacts have been nightly Whatsapp video dates. Now we have a countdown. When this outbreak began in February, the general consensus is the virus’ incubation period is two weeks. You can show no symptoms for two weeks and still have the virus. We don’t know if she has it. Thus, we won’t see each other until at least April 4, when her two-week incubation period ends and the day after Conte’s lockdown is scheduled to end.

That means my birthday Sunday will rank down there with the worst of a life full of them. Maybe I’ll call her on Skype and have her take off her clothes.

I passed my two-week period Sunday. Since March 8, I have not ventured more than 100 meters from my apartment and have only gone to my supermarket, pharmacy and newsstand. I don’t have a sniffle. I should be fine. But how consistent is that two-week rule? No one can say for sure. I do not trust this virus.

Two weeks ago I marked down Wednesday as a huge day. It would be two weeks since Conte’s lockdown, two weeks for the virus to slow its methodical hop, skip and jump around Italy. Maybe after two weeks our numbers would improve, the world would find an ounce of encouragement. Maybe they’ll maintain their own lockdown or lock down if they haven’t already. And the conclusion after two weeks?

While regional variances make it hard to measure, on paper Italy has shown some encouraging signs. The number of cases is big at 72,186, but the percentage of new positive cases each day is dropping. Wednesday marked the third straight day of single-digit jumps, the lowest since Italy’s first case surfaced Feb. 15. In fact, Wednesday’s 5,210 new cases was only a 7.5-percent increase from the previous day’s total after it dropped to 8 percent both Monday and Tuesday. Maybe the virus is beginning to die.

Or maybe not. Wednesday’s to

tal of 683 deaths was the third most of any day and the daily jump in percentage has been between 10-12 percent the last four days. Rome’s Lazio region has only 2 percent of the nation’s total cases but the charts are up and down. Wednesday’s 15 deaths, followed by 17 Tuesday, is by far the biggest two-day total and brings the overall total to 95. Lazio’s new cases of 173 Wednesday were a 10-percent jump from the previous day.

The government and scientists don’t sound optimistic. Issuing an ominous tone as his nation tries digging out of a deadly hole, Conte said Italy is going through “the most difficult moment since the Second World War.”

Said physicist Giorgio Parisi, an expert on complex systems at Rome’s Sapienza University to ANSA, Italy’s wire service: “The number of deaths is rising, but at a slower pace than before and it could continue to rise for a very long time.”

And it could get worse. A 34-year-old nurse in Monza, in the Central Italy region of Emilia-Romagna, committed suicide Tuesday after she learned she had the virus and “had been living with heavy stress out of the fear of having infected others,” according to ANSA. 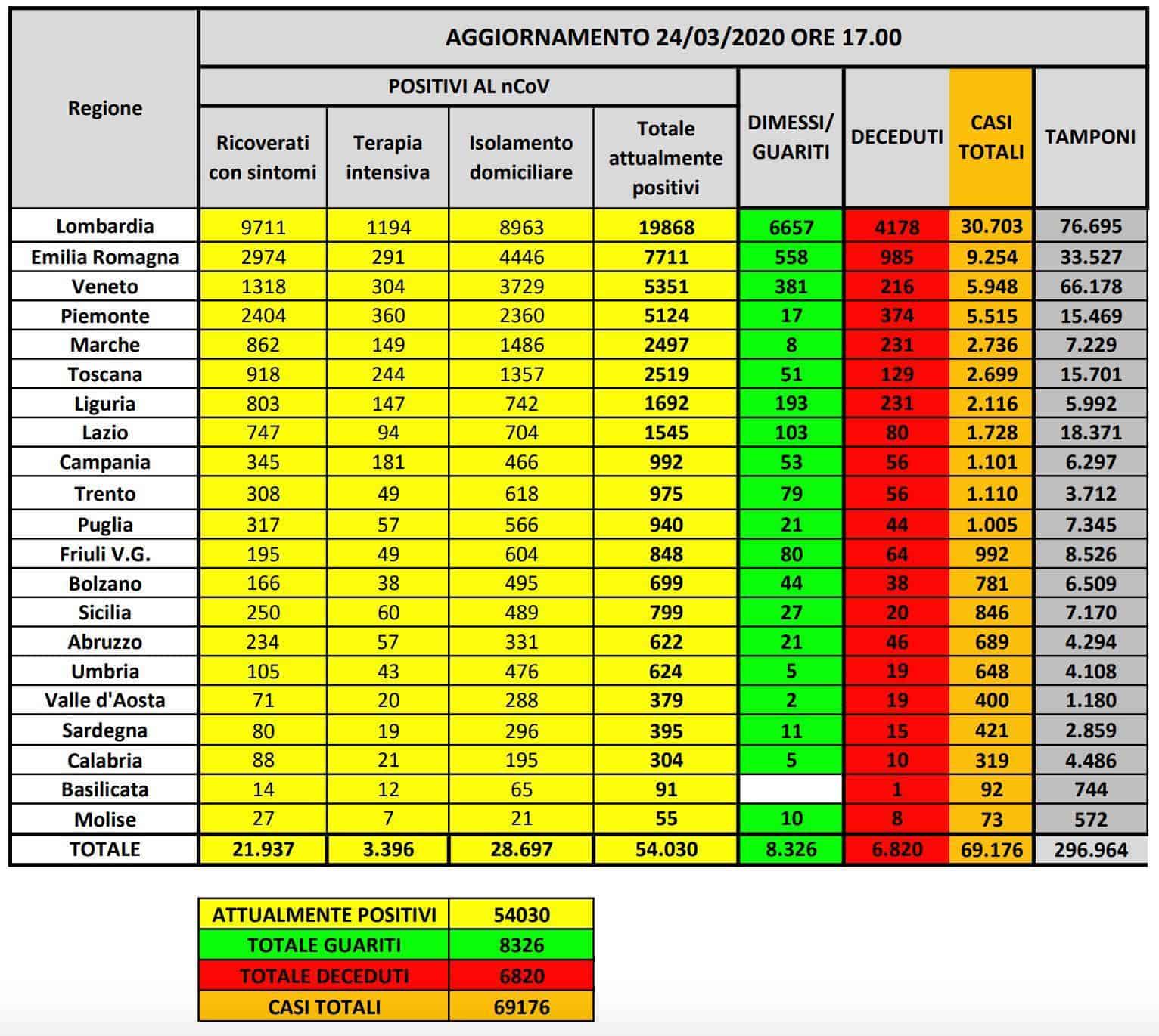 “Right now in Lombardy the contagion is so widespread that we should consider every person potentially positive,” said Roberto Burioni, a virologist at Milan’s San Raffaele University, to The New York Times.

About 8,000 doctors have volunteered to help in Italy. Yet understaffed hospitals are forcing doctors to decide who gets treatment and who gets to die, alone. In this case, the youth often get served. And in some hospitals, a patient is only admitted when someone dies, which helps explain why the number of total cases in Italy is down but deaths are up.

What has happened? It may be due to people not respecting the lockdown. Italy hasn’t reached the moronic level of Florida where its mutant governor didn’t order the beaches closed until after spring break or my home state of Oregon where motels on the Coast advertised great rates last weekend. Rome seems deathly quiet. From my balcony I nary see a car or a pedestrian.

However, nearly 250,000 people have been stopped around Italy and asked to show the government-issued self-authorization form listing one of the reasons they’re out of their home. From March 12-Friday, 53,000 people were given citations. Mobile phone records showed 40 percent of Lombardy residents traveled more than 300 meters from their residence.

Over the weekend, police stopped 53,500 cars and scooters trying to leave Rome and wrote 1,380 citations which carried a 206-euro fine or three months in jail. News reports said people cried in their cars and in the streets. One 53-year-old died of a heart attack at one of the checkpoints.

Some have gone to extreme lengths to skirt the regulations. One woman walked her dog in her neighborhood. An hour later she walked another dog. An hour later, again, another dog. The same police were on duty and investigated. As it turned out, she was asking neighbors to walk their dogs because she couldn’t stand staying inside.

Another woman was walking to take care of her elderly aunt. Police followed her to the aunt’s home and she turned out to be 40 years old.

Conte doesn’t think this is funny. On Tuesday he jacked up the penalties to 400-3,000 euros for anyone out of their home without the form listing one of the three listed reasons or up to five years in jail for anyone who leaves home knowing he or she has the virus. The measures already passed the council of ministers and are now in chambers. He also is allowing regional governors to add their own restrictions. Northern regions have asked help from the army to stop people from moving around.

No, I won’t risk a four-mile trip to Marina’s apartment Sunday. This is getting serious.

Officials feel with the lockdown two weeks old, we should wait until the end of the month to see if the numbers drop. However, a concern is spreading around Italy that the situation is worse than numbers indicate. Keep in mind how many people don’t have symptoms who could still have the virus. Italy has conducted nearly 300,000 tests, only behind China and South Korea.

In fact, Giovani Rezza, an epidemiologist at Rome’s Istituto Superiori di Sanita, said many people with symptoms don’t get diagnosed.

“Those who are counted are only the people with the most serious symptoms,” Rezza told Il Messaggero.

The newspaper also reported that scientists and doctors conservatively estimate that Italy likely has 700,000 positive, with 300,000 in Lombardy.

“There are so many people walking around who have the virus and who are at risk of infecting others,” said Matteo Bassetti, head of infectious diseases at San Martino hospital in Genoa. “To say 700,000 positive is even prudent. There are many more.”

And it’s getting younger.

As of Friday, the average age of the dead was 78.5 years and just over 1 percent had no pre-existing condition. However, stories are surfacing such as Vittorio Baldassarini of Rome, a 46-year-old gelato maker and father of a 9-year-old. On March 9 he felt bad and worsened. On March 15 he was taken to Tor Vergata Hospital and March 19 a breathing tube was placed down his throat. On Sunday, 13 days after falling ill, he died.

His bed wasn’t far from Emanuele Renzi, a 34-year-old who died a few hours later.

So for all those interested in me, I’m fine. I have enough food for a few more days. I finished Francesco Totti’s 500-page autobiography — in Italian — and am enjoying Elena Ferrante’s eight-part TV series, “My Brilliant Friend.” Not that my days are slow but my weekly highlight may be watching the next episode of “Better Call Saul” every Tuesday night.

But for those asking of the fate of Italy, we need more time. We need more patience. We need more discipline. In other words, after nearly two months of sounding death knells, this war here is far from over.