The world has turned off the neon lights on Italy. The glow has become a fog that clouds our future. Italy’s model strategy in flattening the Covid-19 curve lasted all of about three months. I no longer chortle about the World Health Organization pointing to my adopted country as Example A of fighting the virus. I no longer have a life without worries. What Italian scientists, doctors and politicians warned us about but few of us worried about has occurred.

The second wave is here.

For the last two months, Italy’s Covid curve has risen. Slowly but surely, we are reaching a danger zone that has the cautious government going from nervous to reactionary. On Tuesday they confirmed new regulations that range from limiting the number of people one can host at home to not allowing practices for youth sports. For the first time since the pandemic began in February, I’m making changes in my life and not because the government is making me. 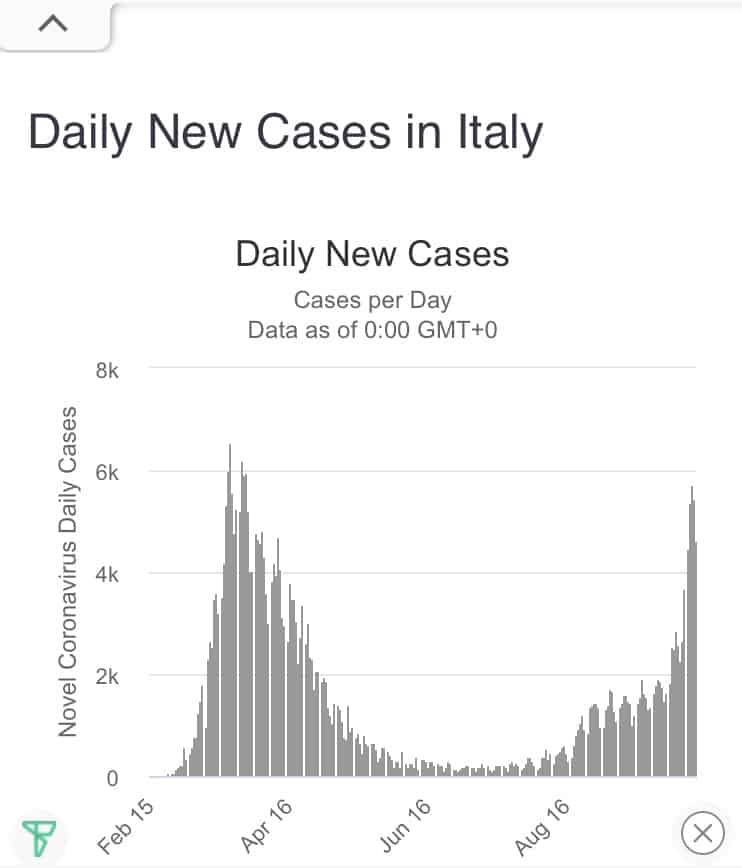 The average number of daily averages per week have climbed steadily since the middle of August (numbers are daily average):

In a five-day period last week, Italy’s number of new cases went from 2,677 on Tuesday to 3,677 on Wednesday to 4,458 on Thursday to 5,372 on Friday to 5,724 on Saturday. These are the biggest jumps since April after Italy became the first western country to go into complete lockdown, a move that flattened the curve and brought our lives back to almost normal.

Deaths in Italy also increased, although not as markedly. They’ve gone from averaging six a day from Aug. 17-23 to 29 from last Tuesday to Monday. Also, 28 players in Italy’s Serie A pro soccer league have tested positive. The nation’s Under-21 team had three positives and may postpone its game European Championships qualifier against Ireland. Four Swiss Guards tested positive at the Vatican Monday.

It’s hitting especially hard in Rome’s Lazio region. After the first wave arrived, prime minister Giuseppe Conte locked down the epicenter in Lombardy in Northern Italy and then the entire region. That shielded us and the rest of the South from mass casualties. Now every time I step out my door I hear ambulances whisking new patients to San Camillo Hospital up my street.

From Aug. 1-7, Lazio averaged only 17 cases a day. From last Tuesday to Monday it averaged 361. Lazio has done 50 percent more testing than in March but the numbers remain alarming. They got my attention.

Deaths in Lazio remain low but our 10,122 active cases are by far the most since the pandemic began. Hitting home especially hard is Enzo Totti, the father of Rome’s legendary soccer star, Francesco Totti, died Sunday of Covid. Although he also had diabetes, he was only 76.

Keep in mind the numbers remain relative. Italy pales in comparison to Spain’s average of 7,445 a day the last week and France 17,029. The United States is in another circle of hell. Over the last week it averaged 50,612  a day.

But while the United States’ laughable excuse for a president dances at his campaign rallies, Italy’s government is laying down new rules. Last week it moved the mandatory mask rule from 6 p.m.-6 a.m. to 24 hours and raised the fine from 400 euros to 1,000. Tuesday it made the following rules to be in effect for 30 days:

“Now it’s increasing and it will increase even more unless people comply with the rules,” said Ruggerdo De Maria, vice-director of laboratory research at Gemelli Policlinico, which was one of four Rome hospitals treating patients with Covid.

I had talked to De Maria in March about Italian scientists saying the numbers reported were way low. He agreed. I asked him Monday what’s the reason for this recent surge. He mentioned three causes:

The situation has startled most everyone. I still wear my mask even to take out my trash. I’ve also noticed the percentage of people wearing masks has jumped from about 80 percent to well over 90. It’s not just the 1,000-euro fine.

“People have come back to being more scared and more careful,.” Giulio Incoronato, a butcher in the Rome neighborhood of Trieste, a city hotspot, told Il Messaggero Sunday. “Before we had to push them.”

Watching the numbers climb brings me back to the spring, when we were in lockdown for three months. I’d leave my apartment every three days to get groceries. That’s it. I went through every film in Netflix all the way to documentaries on widgets. I wrote 12 blogs on the virus. My birthday March 29 was spent on my couch with a bottle of Barolo wine and a Whatsapp video call with my girlfriend, sequestered in her home five miles away. I didn’t see her for a month.

Changes in my life

However, this is different. This feels different. Rome is no longer in a safe cocoon merely obeying the national edict. We are becoming a hotspot. For the first time since the pandemic began, I am cautious. I am avoiding crowds. I am switching soccer pubs for Roma’s game Sunday as mine is getting a bit crowded. I’m avoiding another pub that became increasingly packed the longer I stayed after watching a friend’s team play.

Saturday night I took Marina to Consolini, a romantic restaurant in my old Testaccio neighborhood. To avoid a crowd we went at 7:30 p.m., an hour before the usual dining time in Italy. Sure enough, we were the first diners to arrive. By the time we left 90 minutes later it was nearly full.