That’s exactly what I did for two hours, careening around central Brno on a rollicking tram with beer flying through the air like horizontal rain. Only in Czech Republic is beer part of public transportation. After all, Czech Republic has the highest beer consumption per capita in the world. If the average Czech drinks 140 liters (37 gallons) of Czech beer a year (That’s more than 10 liters a month), why stop when they’re going from Point A to Point B?

Maybe to pee. That’s about it. 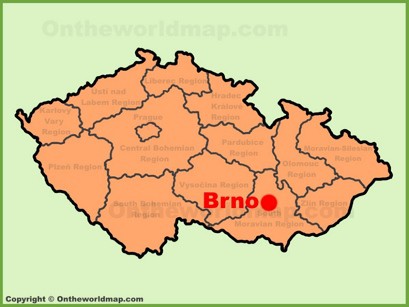 Actually, my particular ride wasn’t in a straight line. It was a circular route going nowhere fast. It’s called the Salina pub. Czechs rent out a two-car tram emblazoned with two giant frothy beer mugs and it tools around town while you drink with your friends.

I hopped on with about 100 other travel writers attending the recent Traverse 22 travel bloggers conference in Brno, Czech Republic’s second-largest city. Combine travel writers with free-flowing beer on tap and the stories flow as much as the beer does. From bombs in Belfast to gorillas in Rwanda, the tall tales grew taller as the alcohol level grew higher.

Myself? I was onboard locked into serious journalistic research.

Writing about Czech beer is easy. Research material is everywhere. Czechs drink morning, noon and night. It’s as much part of their day as tea in the United Kingdom. I once sat down for a cappuccino in the Cabbage Market, Brno’s central square. It was 9 a.m. Sitting next to me was a businessman reading his cellphone and drinking a mug of beer. 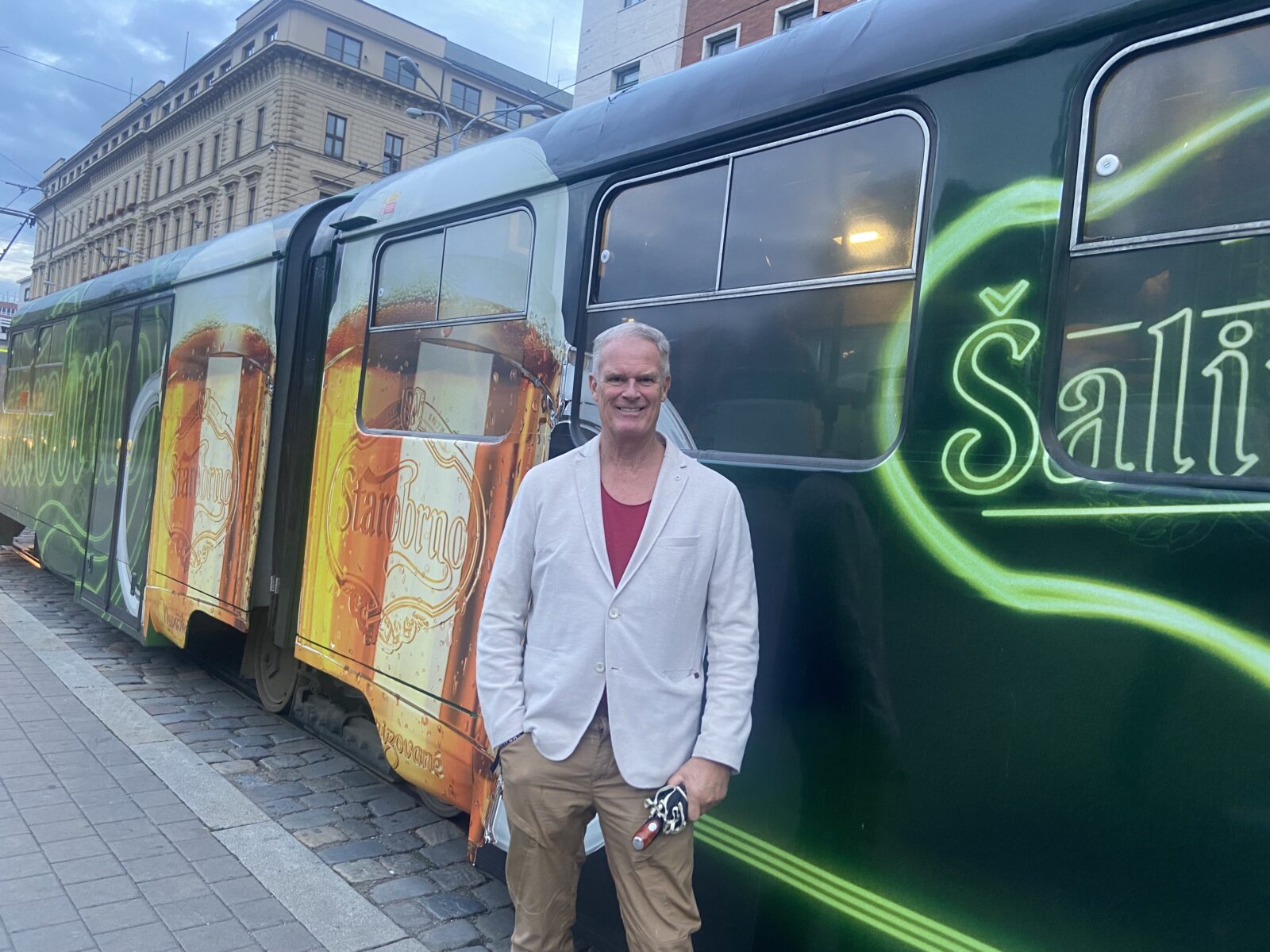 No wonder. My cappuccino was €5. His beer was €3. Actually, in some restaurants the beer is cheaper than the bottled water. In nine days in Czech Republic, including two days in Prague’s touristy Old Town, I don’t recall paying more than €3.50 for a pint. Most were about €2.50.

All the beers in all the bars in all the towns led me to one inescapable word that describes the one product that symbolizes this great and beautiful country of Czech Republic.

Sorry. In what will likely get me thrown hogtied off the Charles Bridge or imprisoned in one of the ancient cells in Brno’s spooky Spilberk Castle, I found Czech beer terribly ordinary. It’s industrial. It lacks variety, ingenuity, creativity. It’s the elevator music of the beer world.

I’m spoiled. I’ve had numerous assignments in Belgium, my favorite beer country. My adopted Italy is the fastest-growing beer nation in the world. Czech Republic’s beer scene is largely stuck in the past.

Czechs, while being funny, optimistic and intuitive, are nothing more than traditionalists. Czech beer dates back to 993 when a Czech bishop built a Benedictine monastery in the Prague suburb of Prevnov and began brewing beer. In 1842, the western Czech town of Plzen brought in a German brewer named Josef Groll who upgraded Plzen’s weak beer with a German-style lager they called pilsner.

Czechs have been drinking pilsner ever since.

Desitka, Vycep Na Stojaka.  Even Starobrno, Brno’s local brew they served on the Salina pub. I couldn’t tell the difference. Granted, despite 50 years of personal research, my beer palate isn’t as sophisticated as some. But the joy of bar hopping in beer-soaked cultures is trying different beers.

In Czech Republic, I felt stuck in one place.

However, I had one of the best dark beers in my life. U Tomana (“U” means “At” in Czech), a brewery bar in central Brno, has an excellent dark beer called a Tomanova. It had a taste of chocolate and not as hoppy as some dark beers. However, later in Lokal U Caipla, one of Brno’s most … well, local bars, a friendly local named Pavel Kotral gave me a cultural tip about Czech beer.

I was afraid to ask who drinks black & tan, the half lager, half dark beer that looks like an atomic mud bomb exploded in your glass. I chugged it as fast as I could before Pavel could inform me. Turns out, it was one of the best beers I had in the country, a combination of sweet amber with a touch of bitterness and served ice cold.

Actually, I preferred the Czech wines. The Chardonnays and Sauvignon Blancs from Brno’s Moravia region were superb and I had a Pinot Noir that rivaled anything I’ve had in my native Oregon, a Pinot hotbed.

The vibe is great

What I liked about Czech Republic’s beer scene was the atmosphere. Beer is everywhere. So are Czechs, out and about, laughing and smiling and including you in their conversations. Public drunkenness was rare.

In Prague I went to a bar called Bar 1401. In that same spot in the year 1401, a Czech theologian named Jan Hus stood and denounced the overbearing and rigid Catholic Church.

He continued his public barnstorming through the years and when he refused to recant his critiques, they burned him at the stake in Germany in 1415. He’s been a symbol of Catholic reform ever since.

In that same spot where he raised the roof in 1401, I sat listening to a pretty Russian named Irene Antonez sing modern pop hits while sipping a nice wheat beer for only €3.25.

In Brno, to start a beer crawl we all gathered one night in the oddly named Bar Ktery Neexistuje. That means Bar Doesn’t Exist. I thought it was secretly styled after an American bar and the owners tried hiding it from communist rule. The truth isn’t nearly that sexy. It was merely the working title the owners threw out there during development and they kept it. It’s only 10 years old.

However, the long wooden bar and the huge seating room upstairs were perfect for overflowing trays of beer that kept coming.

Then there was Harry, trumpeted as the biggest bar in Czech Republic when it opened last year. It’s a sprawling downstairs room with a long row of spigots serving many different lagers and a few darks the bartender told me don’t sell well.

Brew pubs are becoming bigger in Czech Republic. Prague has more than 50 and, admittedly, I didn’t have time to explore more of them. Instead, we toured one in Brno near my hotel away from the center. EFi Brewery is a small brewery that started only two years ago. It brewed a relatively modest 90,000 liters of nine different beers last year, almost exclusively to local restaurants. They hope to sell 150,000 this year.

Its Desitka, at 4 percent alcohol, was just like the rest but its New Zealand IPA, again, dwarfed all the lagers in pure taste. It is smooth as silk.

Head brewer Zedenek Zika, 28, told me 80 percent of the beer they brew is lager.  I asked him why Czechs favor lager so much.

“Czechs are very traditional because we have special technology to make lagers,” he said. “We have very, very thick lagers and very bitter.”

One problem microbreweries have is the Czech beer scene is dominated by three huge national breweries: Pilsner Urquell, which produces about 2 billion gallons a year and is by far Czech Republic’s most popular; Staropramen, owned by Molson Coors; and Budvar, most popular in the Bohemia section of western Czech Republic.

Yes, Budvar has a relationship with America’s most popular beer, Budweiser. Czech Republic is where an American brewer named Adolphus Busch had some Budvar in the 1870s and returned inspired. He named his beer Budweiser to authenticate it.

In 1907, the two breweries locked horns over the naming rights. They eventually agreed Budweiser can use the name in the U.S. and Canada and Budvar can be used in Europe. In the U.S., Budvar is sold under the name Czechvar. I read one report that Czech Bud may privatize and sell to Anheuser-Busch.

My late father’s wholesale company in Eugene, Ore., sold Budweiser. He was so loyal, he not only wouldn’t drink any other beer but Budweiser (or Rainier, the company’s other vile swill), but he wouldn’t talk to employees who would.

I’ll always take Budvar over Budweiser and on a hot summer day in Central Europe, any Czech beer is a nice oasis.

But I’d rather be in Belgium.

How do I get there? Several trains a day make the 3-½ journey to Brno from Prague. I paid €13. A closer location is Vienna. It’s 90 minutes away and train tickets start at €22.

When should I go? September was ideal. Few tourists with temperatures ranging from high 40s to high 60s. August is mid-50s to high 70s. January is cold with snow, from mid-20s to mid-30s.