It’s with cruel irony that Italy is celebrating the 700-year anniversary of Dante Alighieri’s death when we’re all living here through hell.

If Dante had written the Divine Comedy today, he surely would’ve added another circle, one with people dying alone with tubes down their throats, of skeletal remains of businesses and their employees, of an entire population walking around in masks or locked down in their homes, a living hell of inactivity. Here in Rome I have not yet seen flames pouring up from sinkholes or winged demons with pitchforks.

But I haven’t been out today.

On Easter weekend through Monday, all of Italy was red, the highest level of Covid restrictions. Bars and restaurants closed. No travel outside your neighborhood. Mandatory self-auto certification form or risk a 400-1,000 euro fine.

Yes, red. As red as Dante’s Third Circle of Hell.

Maybe Dante can rescue us in a country where 111,000 people have already died and the curve is rising again. Maybe it’s why Italy is spending 2021 celebrating its greatest poet with ceremonies throughout the year. On March 25, the day of Dante’s death in 1321, Oscar-winning actor Roberto Benigni stood in the Presidential Palace in Rome and read the 25th canto from the “Paradise” chapter in the Divine Comedy.

A public reading was held next to Dante’s tomb in Ravenna, where an eternal flame is fueled by oils from the hills of his native Tuscany. Later this year, lawyer Alessandro Traversi will gather colleagues to symbolically rule that Dante was unfairly banished from his hometown of Florence. For those hoping to visit Italy, when it’s ever allowed, the Academy of the Chaff is celebrating “The Time of Dante” as part of its medieval festival Sept. 22-26 in Gubbio, Umbria.

Italian president Sergio Mattarella told the newspaper Corriere della Sera, “The Comedy still attracts us, fascinates us, makes us wonder today because it talks about us, about the deepest essence of man, made up of weaknesses, failings, nobility and generosity.”

Dante even influenced me.

I don’t like poetry. It’s often boring and too flowery to reveal substance. But the Divine Comedy, about a man’s journey to Hell, Purgatory and finally Paradise, hit home with me when I read it in the early 1980s. I was a young sportswriter trying to salvage a career after a bad false start. I lived, ironically, in Las Vegas, where the summers resembled Dante’s “Inferno” and ethics resembled some of the demons who ruled it. One line from his book resonated with me through my career and to this day.

“The path to paradise begins in hell.” 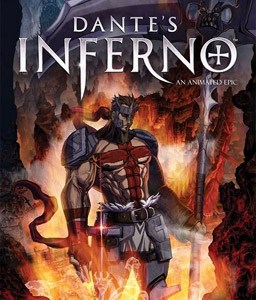 How many of our lives can that sentence describe? But that’s not the only line that tugged at my brain and made me think twice.

“The devil is not as black as he is painted.” (My boss really doesn’t have cleft hooves and carry a pitchfork.)

“All hope abandon, ye who enter here.” (My many assignments to Nebraska.)

“Consider your origin. You were not formed to live like brutes but to follow virtue and knowledge.” (My dealings through the years with athletes and coaches.)

“… and thence we came forth to see again the stars.” (Even in lockdown Italy, there is hope.)

Some things you didn’t know about Dante Alighieri:

Actually, Lemma had it all wrong. The Divine Comedy may be about Hell, but it’s more about hope. Hell is just the setting. It’s why he called it a comedy. In Ancient Greek theater, a tragedy is a story that starts well and ends badly; a comedy is one that starts badly and ends well.

The Divine Comedy is a triumph of mankind’s spirit and hope. Saturday night I sat in on a Zoom lecture with Kristin Stasiowski, a Yale-educated professor of Italian language and literature at Kent State University in Kent, Ohio. She is a Dantean scholar. She could quote any chapter and verse in the 900-page book, like the pope can quote the Bible.

Her riveting hour-long talk came, also ironically, the day after Good Friday, the day Dante started his story. She reminded me of what attracted me to the book so long ago. I remember being swept away by the searing images of burning flesh, hard labor and man’s sins. They mesmerized me as if I was a 12-year-old boy. What I’d forgotten was Dante’s central message.

“Every now and then we are like ramblers of the wilderness trying to find a guide to help us through and trying to find perspective that can lead us to salvation,” Stasiowski said. “Certainly along the way you get distracted by a great many things that can lead us to think that perhaps the road isn’t going to be straight. It isn’t going to be easy. And maybe the promise of salvation isn’t necessarily a promise but was really perhaps just a carrot. But with Dante we see he is capable of leading us and we don’t have to hang on just to our own resources but rather you can count on the grace of God — and a guide.”

The “Divine Comedy” is semi-autobiography written in the first person. The main character, assumed by everyone is Dante himself, used his own exile as a vehicle to write about his journey through Hell. He is chased by wild animals, gets lost in a dark forest, watches people being tortured, not totally amiss of what Florence was going through at the time.

“Dante purposely and intentionally awards us to the idea that the very best of his life came to him at the very worst of his life,” Stasiowski said. “And that to use the experience that he had to try and figure out where salvation began. Salvation begins sometimes in a very unlikely, very upsetting, very disorienting, very painful place in our lives.”

It’s where we get the term Good Friday. It’s odd calling the day Jesus died as “good” but to Christians, it is the beginning of salvation.

In Dante’s story he meets a man named Virgil who guides him through Inferno and Purgatory. In Dante, Virgil finds a beaten man, ashamed, lost and without hope.

“Chased by evil, he’s being weighed down by his own fear of failure and he’s alone,” Stasiowski said. “That’s the enduring influence of Dante, right there. Virgil comes along and says,  ‘Well, Dante. I’m here. I’m going to help you.’

“He feels encouraged. That’s kind of what we need, too. It’s not that Dante immediately meets his hero, his savior, and he feels like, ‘OK, great! I have the strength of 10,000 people and I’m going to go on this journey.’ He feels even more discouraged because he doesn’t feel he’s worth saving. Virgil says, ‘No, that’s not the case.’ Dante says, ‘I’m not (St.) Paul. I’m not that Christian and classical figure who gets to go to Hell and learn about the afterlife and gets a sense of God and builds an empire.’

“‘I’m just a little old Florentine. Why would God love me so much?’ Virgil has convinced him that grace doesn’t work on the deserving and not deserving. Grace because that’s God’s goodness.”

Even if you’re not religious, you’ll find something in this book with which to relate. So versatile, for centuries scholars couldn’t assign it to a literary genre. It could go under autobiographies, history, science fiction, theology, philosophy. Hell, it’s just a good, roaring tale. 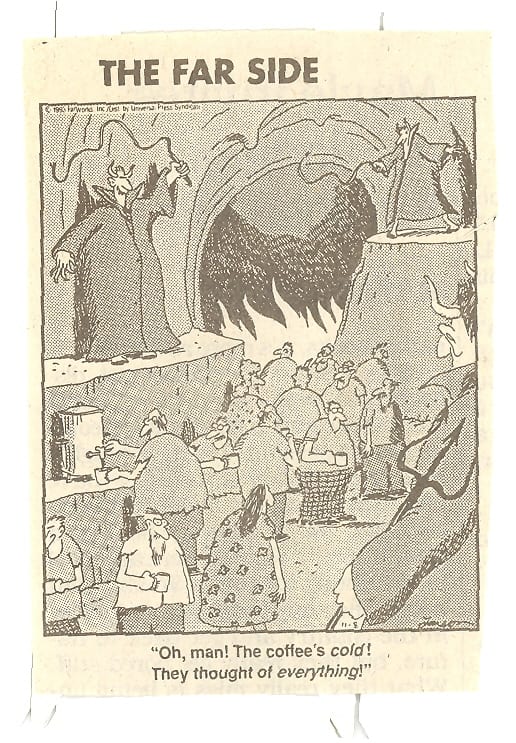 After seven centuries, it remains in modern culture, particularly Dante’s “Inferno” section. It made the covers of The Economist and The New Yorker. There’s a board game out called “Dante’s Guide to Hell.” There are Dante Leggos. In the 1991 film “Cape Fear,” about an ex-con’s pursuit of a family’s teenage daughter, Robert De Niro is quoted saying Virgil is guiding him through the gates of Hell. The Inferno also appears in the films “WestWorld” and “American Horror Story.”

It often popped into the popular American cartoon, “The Far Side.” Dante’s face appeared on Italy’s one lire coin and is on its two euro coin. In Rodin’s “The Thinking Man,” he is contemplating Dante as he sits above the gates of Hell.

And the Divine Comedy is no more apropos than it is now. In 2021. In Italy. For the rest of April we in Rome will be orange, one step lower than red. The main difference is we don’t need a form to walk around the city. We still can’t leave town without “an essential reason.” It’s a self-contained hell well into its second year.