One of my favorite things to do in Italy is go to Salento, a remote peninsula in Puglia stretching the width of Italy’s heel and bordering two beautiful seas.  When I was a little girl my family took me to the beach, and it was love at first sight.  The aquamarine color of the water, the warm temperature, the fact that I could go far out for miles and still touch bottom gave me a sense of security, of freedom. It was beautiful. This was in Torre dell’Orso.

This time I wanted to change things, and I went to the west coast of Italy’s heel.  Torre dell’Orso is on the Adriatic side. This was on the Ionian Sea. As in usual Annamaria Borelli fashion, I needed to be prepared for my journey.  I knew that in this area you must have a car.  Taking public transport, you’d need four buses to get there, and the buses don’t even take you to your destination.  By the time you arrive, the day will be over.

The freedom that renting a car for two days gives you is unlike any other.  I felt like I was home in the States with all the comforts and the beauty of Italy.  I rented my car with the company SIXT, and I was on my way.  The company is German so you can call the representatives in English.  They were very helpful, and their English was great.  I would recommend getting their insurance.  You could also get third-party insurance but make sure they cover rentals.  I tried to be on the safe side because being out a couple hundred euros and having to pay a huge bill for damages would have negated all of the joy I felt going on this road trip of a lifetime.

Before going to Punta Prosciutto — yes, this is the name of the beach —  I went to the Arthotel & Park Lecce.  It was 51 minutes out of my way, but I always wanted to stay in one of these secluded places.  It was beautiful.  It had great grounds, and it does have a spa.  I would recommend getting a hotel in the area.  The town of Porto Cesareo has some options.  Next time, that is what I will do.  The good thing about the hotel outside of Lecce was that I was able to enjoy the ease of going into the city at night.  Lecce has a beautiful historical center that never gets old.

The car I drove was a Mitsubishi Eclipse, Hybrid. It was wonderful.  Spacious with all of the comforts.  It was also rugged so when I would curve on those streets in inland Salento, I was ready for them.  I made my reservation for the beach club or “lido” as they say in Italian, on Whatsapp. Ah! The beauty of technology. 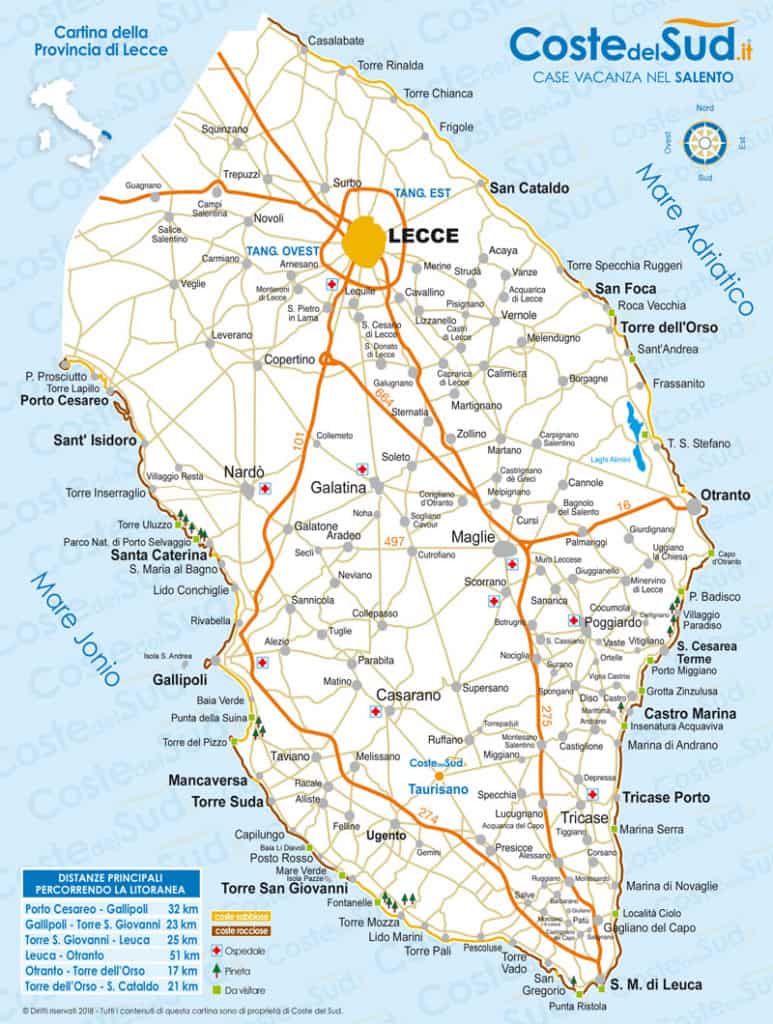 However, the lovely lad on the phone gave me the wrong address, and I couldn’t find the place.  So I changed it up and went to the La Punta beach club at Punta Prosciutto.  In September, when most of the tourists leave, you have this luxury of choosing where you would like to sit, especially in terms of space.

September is the perfect time to go to Italy.  The temperature is perfect, and you aren’t on top of everyone which can make the outing stressful. I paid €30 euro for a day at this beach.  They give you two “lettini” and one “ombrellone.” (Two beds and one ombrella.) I went alone so I was able to have a lot of space for myself.

What a thrill to exit the beach and not have to wait for a bus.  I took the car back to the hotel and got myself ready for the night.  I was on my way to Gallipoli which was 30 minutes from my hotel. One of my very good friends and an immensely talented opera singer was performing. It was wonderful.

I even parallel parked in the small streets of Gallipoli which was no small feat.  You must pay for parking at the little kiosk that says “P.”  You put in your license number, you put in the amount for as long as you want to stay.  Put the ticket on the dashboard and there you go.

I got back to the hotel at around midnight.  Having those nice grounds surrounding me made me feel like it was real getaway.  Breakfast was included so I had a pasticciotto, which is a specialty of the area and a glorious cappuccino made by a rather attractive waiter. Ok, Annamaria, stay on track.

I did go back to Punta Prosciutto, but the weather wasn’t great.  I went to another beach, the one I tried to find in the first place.  This was totally hidden, but I liked the Caribbean feel and the bar was nicer.  The weather was bad, and I had to go.  But, I had my secret weapon: my rental.  So I went back to Bari and went to the mall. 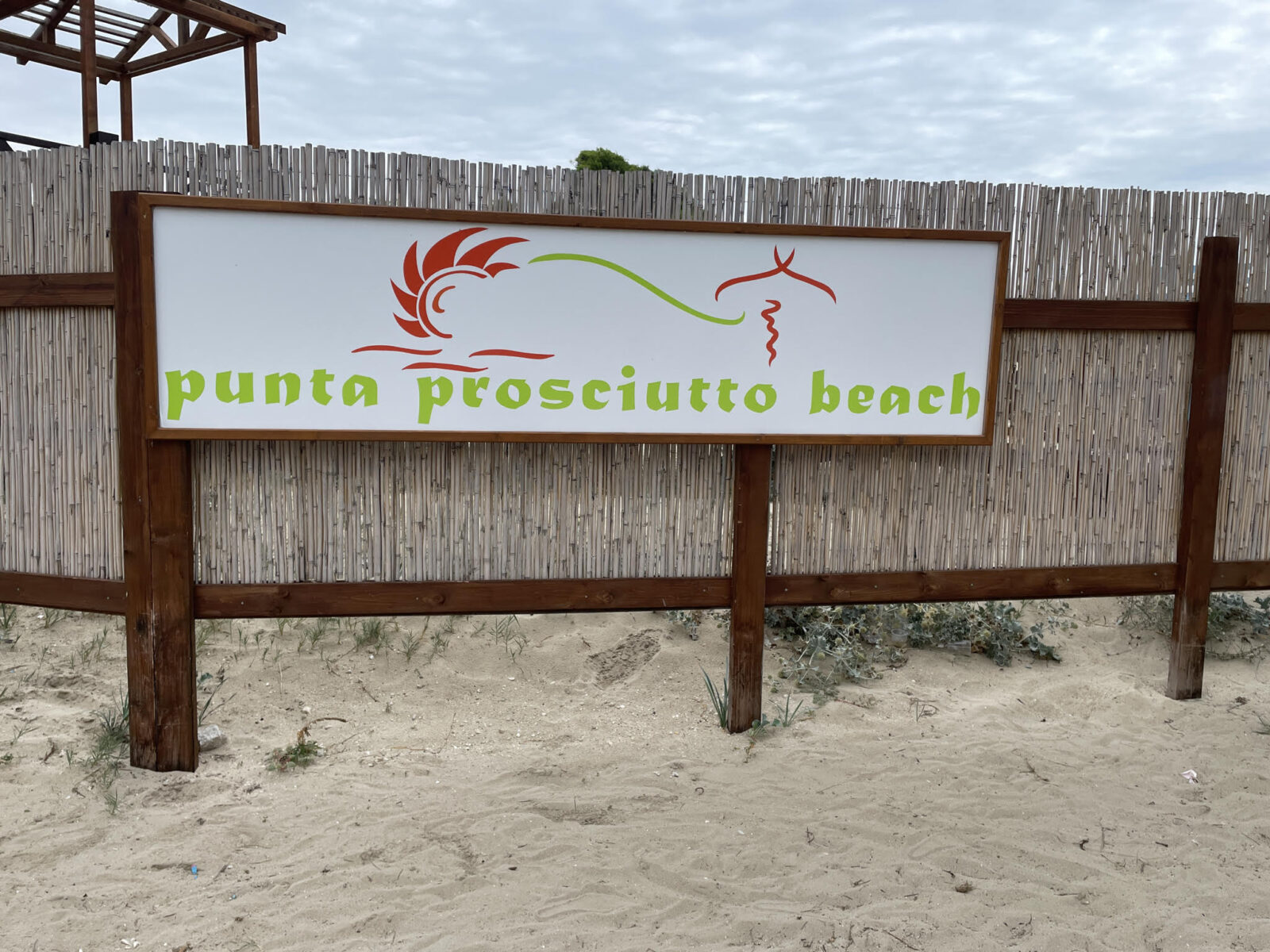 In Bari there is an awesome mall called Parco Commerciale Casamassima. I went to the huge supermarket Conad that seemed to be like a Costco in the States.  I had a car, a megastore and I was in Italy. I am telling you friends, I was a pig in mud.  They had beautiful stores, a great mall.  I was tan.  Life was good.

I had the car until 11 p.m. to have ample time to give the car back to the company.  The plan was to stay at the beach all day, but that didn’t work.  Unfortunately, if you hand in the car early, you won’t get that money back so I kept driving until I couldn’t anymore.

You have to give the car back with a full tank of gas.  Well, guess what friends. This was the first time I pumped my own gas.  I was able to do it, and it was another thrill for me.  I’m telling you, it’s the little things.

Three steps to pumping your own gas in Italy:

I took the car to the airport, Bari Palese.  It’s also named after the Pope John Paul II (1978-2005).  To get back into the center of town I took the Ferrovia del Nord Barese which is a little train constructed by the European Union connecting the airport to Bari and other cities such as Andria, Corato, Terlizzi, Ruvo and Bitonto.

As I was walking back to my apartment I got a gelato as a reward.  I had driven in Italy.  The car had not one dent, I was alive, and what a weekend.  Even if it was a solo trip, I still filled my weekend with joy.  As they say in Italian, “Riempi la vita di gioia.”