Fifteen months ago I walked through Rome’s Centro Storico and could feel death. Every shop, restaurant and bar had closed. In two hours I saw only about 30 people, all scurrying back to their homes after a quick trip to the grocery store, bags in hands and masks on faces. Police and soldiers stood guard at every piazza, keeping out everyone who didn’t belong. I felt like I’d walked onto the set of a horror film.

Sunday night and Monday morning, the horror film that has been pandemic Italy finally had an intermission. People sang until they cried. They danced to the cheers of their own voices. Italian flags flew like prayer flags in the highest Himalayan mountain.

A country knocked to its knees one year ago stood atop Europe. For the first time since 1968, Italy’s beloved and recently humiliated soccer team won the European Championship. Its shootout win over host England not only capped one of the most remarkable turnarounds in international soccer, it turned around the mood of a country that has shed too many tears over too many graves.

Walking through Campo de’ Fiori, Centro Storico’s pre-Covid party central, I saw people hopping up and down next to the tall statue of Giorgano Bruno. Even ol’ Giorgano seemed to smile from under his black hooded cloak which would be a neat trick since the monk was burned at the stake for heresy in 1600.

Young women in halter tops and young men with no tops, swayed arm in arm around the 550-year-old cobblestones. Standing guard were three huge Carabinieri vans backing an entire squadron of Carabinieri police complete with riot gear. They didn’t move. I asked if they had any problems. Have they seen many drunks?

Nothing, they said, and they all smiled.

I approached two men in about my age bracket, both wearing Italy’s blue jersey and asked what the win meant to them.

“This is a day to live,” said Piero Danieli, 54, “This is the return to the real life. This is a push to restart the country.”

I had debated whether to venture into Centro Storico Sunday. It was arguably the biggest sports day in the country since it played for the World Cup title in 2006. Matteo Berrettini, a Rome boy, was playing Novak Djokovic in the Wimbledon final to become the first Italian man to win a Grand Slam since 1976. Following that would be Italy, a four-time World Cup champ but usually a bust in Euros, trying to keep England’s number of European titles at zero.

However, with more Italians traveling this summer and the mask edict for outdoors gone the last two weeks, Italy’s Covid curve recently reversed upward. The nasty Delta strain has become 30 percent of all new cases. I’m double vaccinated. So is 47 percent of Italy. But that makes us only about 60 percent effective against Delta.

Rome had set up maxi screens around the city, with one in Piazza del Popolo that would host 2,500 people and another on Fori Imperiali, the road connecting Piazza Venezia to the Colosseum, hosting another 1,000. They were invitation only.

How much danger would it be to venture into the maw of a soccer-crazed city ready to explode from 15 months of pandemic hell and 53 years of European soccer disappointment?

I decided I couldn’t chronicle history from the safety of my own home. I went to my soccer pub, Abbey Theatre, where they have some of the strictest protocols in Rome. Mandatory masks when entering. Barstools a meter apart. No standing allowed to watch the game.

The evening started on a downer as the 25-year-old Berrettini couldn’t continue his magic and fell to Djokavic in four sets. For the soccer match I moved to the front bar and took a seat where my favorite bartender, Darien McManus, is always quick to serve me a bottle of My Antonia, one of my favorite Italian craft beers.

Darien is Liverpool raised and Liverpool FC mad but shares in the angst that is English national soccer. The country that invented the world’s most popular game hasn’t won anything since the 1966 World Cup. At home.

I asked why he wasn’t optimistic.

“The pressure,” he said. “Fifty-five years of pain. At Wembley, the biggest stage in England. Also, Italy’s attack is unreal.”

Sitting next to me was Ben Masterson, a young tour guide and travel agent who moved to Rome from Whitehaven, England, near the Lake District.

“I think Italy will win, unfortunately,” he said. “It could go either way. It depends how tired Italy is.”

They weren’t tired at all. Neither was England. Luke Shaw put about 55,000 English fans in the 60,000-seat stadium into orbit with a brilliant goal, booting an entry pass into the corner in only the second minute. Then England sat back and took on rush after rush from Italy until finally Leonardo Bonucci, a defender, scored off a deflection in the 67th minute to make it 1-1.

At one point, Italy had 79 percent possession and England star striker Raheem Sterling, the fastest guy on the field, had done zilch. It seemed only a matter of time when Italy would win. As it turns out, it took a lot of time: two 15-minute extra periods and a shootout.

They were odd choices for England manager Gareth Southgate who inserted all three late in the game primarily to take some of the biggest pressure penalty kicks in the nation’s history. 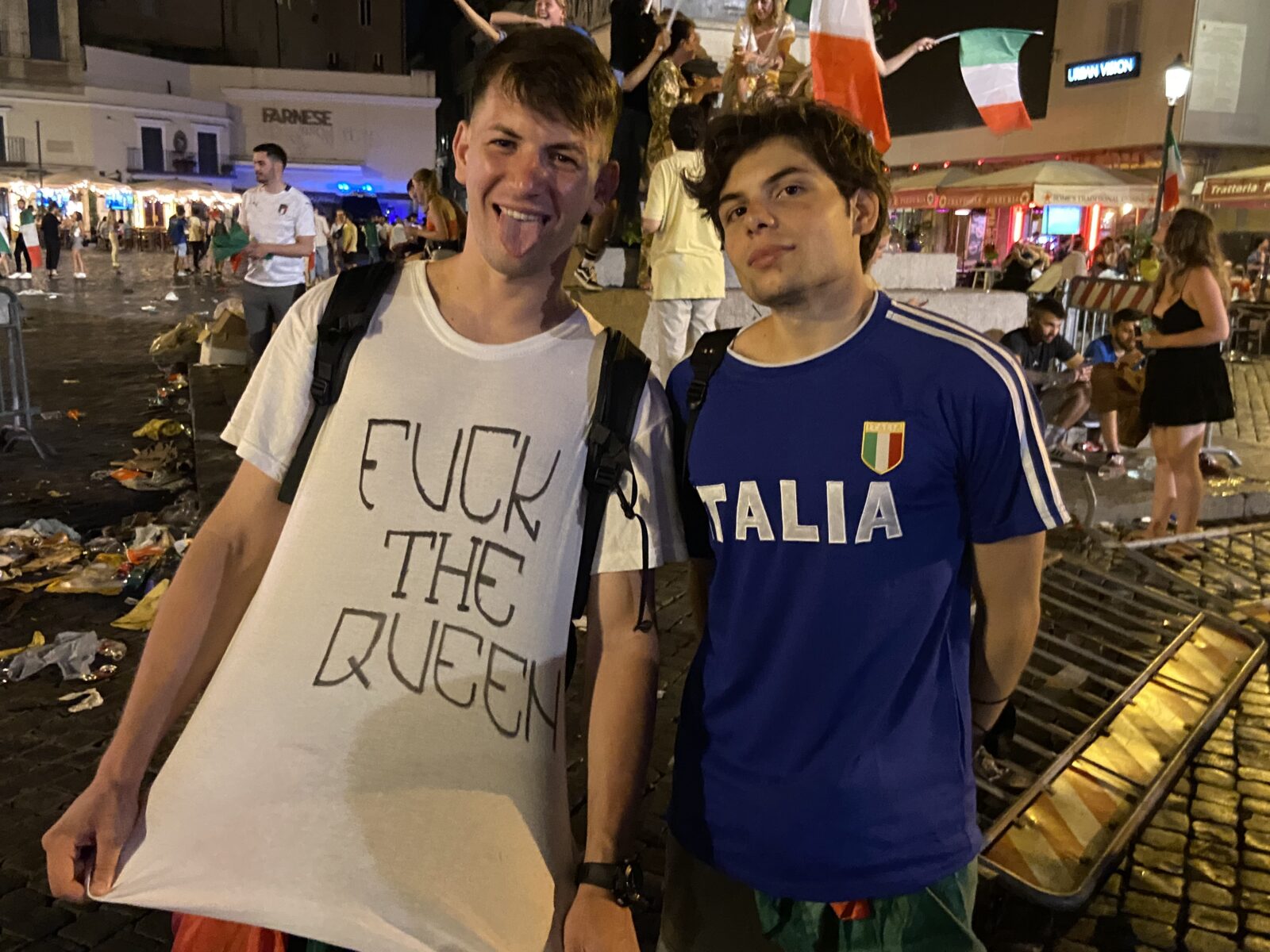 Southgate is forgiven. Since taking over in 2016 after Iceland eliminated England in the last Euros, he’s lifted England back to near the top of the continent. However, no turnaround can match Italy’s. Since hiring Roberto Mancini after his stint with Zenit in Russia three years ago, Italy has gone from missing the entire 2018 World Cup to European champions.

It upped its unbeaten streak to 34 games, dating back to September 2018, and is one from the record of Brazil from 1993-96 and Spain from 2007-09. Italy hosts Bulgaria in World Cup qualification Sept. 2 and plays at Switzerland Sept. 5. With the World Cup in Qatar only 16 months away, Italy must be considered a major contender for its fifth title.

As Italy poured onto the Wembley pitch and England’s players bent over in grief they may never get over, I dashed outside into the narrow back roads of Centro Storico. I heard a steady roar like a jet engine down one road and found a mob next to the main thoroughfare, Corso Vittorio Emanuele. It was one big moshpit of gyrating bodies in blue jerseys, carrying red, white and green flags.

Cars roared down the street, horns blaring and bodies hanging out of windows. It was young, old, men, women. They all had one thing in common: huge smiles.

Crossing the road and joining the mob rushing into Campo de’ Fiori, I hoped Italians wouldn’t have to depend on Euro champion Italy winning another soccer tournament next year to forget about Covid. We’ve followed the rules to the letter. Now the rules are few. We’re all watching the curve as much as we are soccer.

“This is a big party because everybody is happy and it is right to celebrate,” said Robert Di Stefano, 55. “But the pandemic isn’t over. We have to be careful.”

With many streets cut off to traffic, cabs were more scarce than English fans dressed like the queen. I hoofed half of the two miles back home before a taxi picked me up. I finally poured myself to bed at 3:30 a.m.