ASCOLI PICENO, Italy — When you live in Italy, food transforms you. It changes your eating habits. You swap out bacon and eggs for cornetto and cappuccino. It changes your tastes. Less is more or do you really prefer the 50 ingredients in Olive Garden’s pasta sauce? It changes your body. Watch the weight fall off like a cheap suit after eating fresh food every day.

So what am I doing in a gorgeous Italian town near the Adriatic surrounded by fried food, the antithesis of what made Italian cuisine famous and Italian bodies prized? 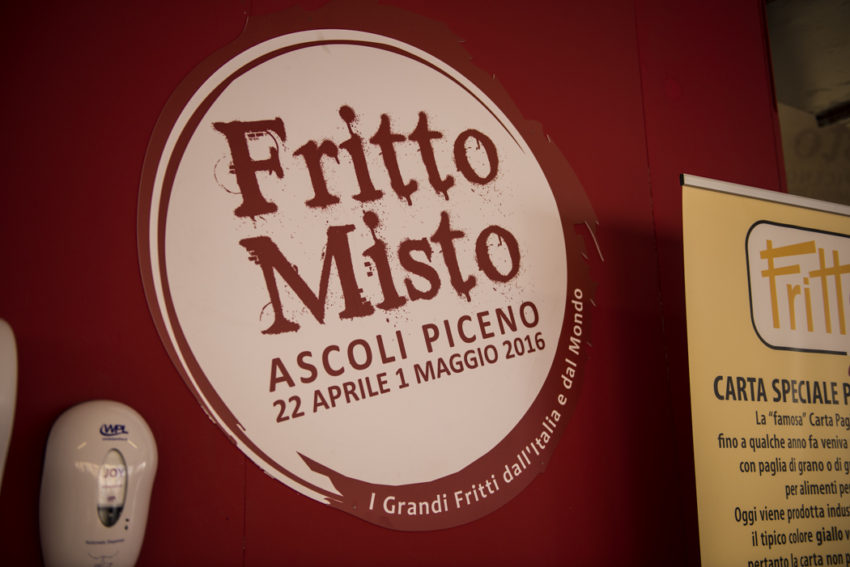 Ascoli Piceno is a town so cute you want to hug it and take it home, at least it’s food. The town of 50,000 people — and a million ascolani — dates back to the 9th century and is about 15 miles from the Adriatic in Le Marche. I call Le Marche “Tuscany light.” It has all the things Tuscany has — beaches, hill towns, fantastic wine — at half the price and a quarter the tourists. Ascoli Piceno dates back to the 9th century and its Piazza del Popolo may be the prettiest piazza in Italy, lined on one side by the spectacular comune building.


So why here? Ascoli Piceno is the birthplace of Fritto Misto’s star performer. The olive all’ascolana is the little olive stuffed with veal, breaded and then fried. It’s served as an antipasto from Sicily to the Swiss border and during Fritto Misto it’s as omnipresent as cotton candy at an American county fair. Visitors walk around holding little plastic buckets or paper cones filled with little brown olive balls.

On Saturday my girlfriend, the photographer Marina Pascucci, and I took a three-hour bus from Rome and checked into the lovely Il Decumano Bed & Breakfast. It’s on the quiet but gorgeous Corso Mazzini, lined with some of the prettiest buildings in town.


Walking down the street toward the festival, I could nearly smell the red flowers in clay pots hanging from balconies over 19th century street lamps. We passed under a romantic balcony of the gargantuan palace serving as a local bank.

What a great place to fill my arteries with fried food.

However, over two days I learned a lot about fried food in Italy. One, there is a lot of it. Who knew in this gastronomic paradise that is Italy, where pizza has no grease and gelato is so natural it’s almost considered health food? But I saw the cornucopia of fried cuisine when I entered Piazza Arringo. For 12 euros I bought 12 little tickets plus a drink voucher, good for about three to four dishes. But how to choose? Standing before me was a big temporary pavilion with 17 booths covering all the fried food in Italy — and parts of the world.


Campania — Fried pizza (Not as disgusting as it sounds).

My growling stomach, sparked by the recollection of days in American fast food diners, convinced me to try the food with the shortest line. That was for fried pizza. I pictured a big pizza pie plunged into a giant sink of boiling grease, then surfacing in the form of a reddish-brown hubcap. No. It’s a puffed up mini pizza. Picture a sugarless donut covered in fresh tomato sauce, mozzarella and a sprig of basil and you have the fried pizza. Warm and surprisingly light, it confirmed the philosophy of Naples pizza, the birthplace of pizza and the capital of Campania: Less is more.

Next came a trip down the coast to Sicily where you can find big arancino balls in nearly every bar, cafe and restaurant. At Fritto Misto, they’re the size of baseballs. Served in big paper cones, they’re fried just enough where they don’t fall apart in your hand. Mine was a delicious mix of mozzarella, rice, peas and ragu meat. Light, fluffy and absolutely no grease, it was simply the best arancino I’ve ever had.


I had the obligatory ascolane. Every town has its symbol. San Francisco has the Golden Gate Bridge. Florence has the David. Ascoli Piceno has a little stuffed olive. These weren’t quite as good as I’ve had in Rome where they’re the perfect accompaniment to a crisp Frascati white wine. Biting into ascolane at Fritto Misto I felt a splash of grease hitting the roof of my mouth.

It’s no wonder that young women stand outside the pavilion passing out handfuls of Citrosodina, lemon-flavored sodium capsules that settle stomachs. But actually, despite some speed eating, I wasn’t all that full. My stomach didn’t have that feeling when I eat American fast food, like that little monster from “Alien” is ready to explode from my stomach. I felt surprisingly fresh.


How could that be? The perfect source is one Andy Luotto. Half-Italian and half-American, Luotto splits his time between his native Brooklyn and his home north of Rome. He was a major TV cooking star in Italy in the 1970s and today adorns the posters around the festival advertising Farine Magiche (Magic Flour). Next week he opens La (There), his own restaurant on Rome’s Piazza Venezia. With a salt-and-pepper beard and glasses and a floppy blue chef’s cap, he could pass for a Renaissance artist. But he has a quick wit and defends the notion that Italian fried food is healthy. A big point is Italian fried food is always an appetizer. It’s never the main course. Unlike in the States, it’s never served in a bucket.

“It’s the way we do it,” he said after doing a cooking show in fluent, American-accented Italian. “It’s the type of oil we use. We use more olive and peanut oil.”

Also, Italians cook at lower temperatures, about 150-160 degrees celsius. American temperatures could fry a 747. But oil temperatures aren’t the only reason that, according to the Organization for Economic Cooperation and Development, only 10 percent of Italians are obese compared to 35 percent of Americans.

“They eat too much,” Luotto said. “They don’t have balanced diets.”

He said he misses pastrami in the States and has only found a couple of places in Rome with a decent hamburger. He says when he goes home to Brooklyn he eats “hot dogs until I get sick.” That’s the problem with American fried food.

The next day I jumped back in the fray. I helped Marina eat her cremini. They taste like little squares of breaded, fried vanilla cream, the perfect, light after-dinner snack. The arancino booth came calling to me like Sirens again. I had one filled with speck, an Italian meat similar to prosciutto, and pistachio. It sounds odd but the pistachio added just the right touch of sweetness to a glorious creamy mess of cheese, rice and meat.

Fritto Misto, which runs through Sunday, has become an insider’s cultural event where you don’t feel like a tourist. Except for a small school group of German students, I was about the only foreigner I saw. Last year, the festival attracted 95,000 people. Plus you learn a lot, mainly, Italians even make fried food well.

“Our message is that fried food isn’t so bad,” said Michele Tassini, Fritto Misto’s executive manager. “In fact, it’s good for your health, if you don’t eat it so often. But eat it when it’s made with high-quality food, high-quality oil. The olives that are made for ascolane are tenere, soft, tender.”


Besides food, we also developed a small dependency on Le Marche’s signature Pecorino white wine. We left the fray and found a lovely little wine shop/restaurant called Enoteca Kursaal where we bought a bottle of Onirocep (Pecorino spelled backwards). Simona even threw in free plates of spaghetti carciofi for Marina and spaghetti with olive sauce for me.

You could spend the entire 10 days here and not eat everything offered. If you did, it may not show. It’s Fritto Italiano.