Handy tips on preventing illness overseas: Or why never to eat animal parts with hair

FRANKFURT, Germany — I just finished the worst road trip of my life, which is saying something after traveling to 101 countries and 47 states. That includes such backward rural outposts as Haiti, Borneo and Nebraska. This time I went to a very tame destination, one I’ve always enjoyed visiting and that has all the modern conveniences of every day travel.

No one gets sick in Germany. You get hung over in Germany. You don’t get sick. It’s as clean as Switzerland with funner people. But how bad was my magazine assignment to Germany? In five days, I didn’t drink one beer. I didn’t eat one sausage. I mean, what’s the point of going? It’s like going to Italy and consuming nothing but Pringles and water.

It proves my point: When you are sick overseas, even Shangri-la seems like the third circle of Hades. That’s where I just spent five days, curled up in a feverish pit in Hell where I barely had enough energy to crawl to a grocery store for food rendered as tasteless as last month’s Der Spiegel.

This marks my 40th year of international travel. I’ve been extraordinarily lucky. I’ve had very few illnesses overseas, but a lot of it isn’t luck. I know how to take of myself on the road. I get the proper inoculations. I know what preventative medicines to take and keep a keen eye on what food and fluids I ingest. Traveling primarily alone, I’m my own medicine chest/nurse/doctor/free clinic.

However, if you stay off the beaten path long enough, you’re bound to get nailed. It’s inevitable. Evil lurks in the unknown shadows of the world’s darkest corners. You won’t know what will hit you. You’ll just know when. However, if you try too hard to stay on that beaten path, for fear of eating fried tarantulas will upset your system, chances are you’ll be praying to the porcelain gods, too. I once met an American couple scuba diving in Mexico. The woman was so paranoid about the local food, she packed enough food to last her the whole week. She was violently ill in three days.

Overseas one must build an immunity system. Otherwise, any strange strain will invade your system like armed jungle bandits, all of whom I would’ve welcomed the one time I had typhoid in Northern Thailand.

For all those planning international travel in 2018, here are four key rules I’ve learned — the hard way.

DON’T EAT EGGS IN ASIA. I’ve been sick five times in Asia. Three times came from eating eggs. Eating street omelettes in Taiwan and South Korea left me retching in the streets before I even made it back to my room.

I once traveled 28 hours to the lovely Chinese lakeside village of Yangshuo. Arriving late at night, the hotel lost my reservation and they stuck me in a hotel out in the sticks, where dirt roads border rice paddies. The next morning, the crestfallen Yangshuo hotel owner felt guilty and came over with a free breakfast. That included eggs. Sometime about noon I finally stopped projectile vomiting.

In Asia, they often don’t refrigerate their eggs, and that region of southeast China in summer is hotter than the inside of a Buddha’s bowels. Heat plus spoiled eggs is not exactly sweet ‘n sour.

DON’T EAT ANY ANIMAL PARTS WITH HAIR ON THEM. This time last year I was in Laos where I woke before dawn to catch the Super Bowl at a U.S. Embassy annex. When it was over it was about lunchtime and I found a small outdoor place with an item loosely translated to “buffalo salad.” This “buffalo” was not the buffalo I enjoyed in hamburgers and stew in Colorado. It wasn’t the bufala mozzarella I eat with tomatoes and olive oil in Rome. This “buffalo” was the shin of a water buffalo. The chunks of buffalo skin featured little sprigs of bristly hair that don’t have the same palatable effect on a salad as say, oh, sourdough croutons.

The next morning, the symptoms of food poisoning came one at a time, like messengers welcoming me to Hell: “Good morning, sir. My name is diarrhea. Welcome to Laos.”

“Hello, sir, this is your stomach calling. Please empty my contents all over the toilet.”

“Hello, sir. My name is Migraine. And I’ll be accompanying you for all your waking hours today.”

“Good evening, sir. This is your fever. Try not to move too far off the bed.”

Fortunately, I was in the capital of Vientiane and the nice Lao woman in the pharmacy knew exactly what I needed and wasn’t surprised by my plea. I think she often gets cases of buffalo skin hangover. She sold me some Tylenol and Thai-made orange electrolyte powder and I was fine by morning. 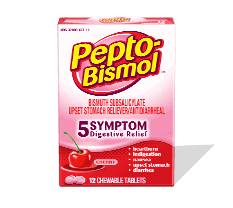 TAKE PEPTO-BISMOL. They are little pink chewable tablets that serve as a contraceptive against stomach ailments. I eat two after every meal in the third world and my intestines are comfortably blocked up. You get a little constipated but that is much better than the alternative, particularly when taking an eight-hour bus ride through land void of bathroom relief.

Unfortunately, I didn’t take Pepto-Bismol in 1978 when I went trekking in Northern Thailand. I do remember eating stirfry from a street stall in the days leading up to the trek. I just don’t recall what was in the stirfry or where it was before getting fried. I learned quite painfully that if a pile of food has been sitting in the hot sun all day, it doesn’t matter how much they stirfry it. It’s going to explode inside you.

To this day, I am the only person I know who ever had typhoid. What is typhoid? It’s basically when your insides wake up and go, “FUCK IT!” and stop working. The list of symptoms could fill a medical dictionary: 103-degree temperature, vomiting attacks, diarrhea, migraine, severe dehydration, dizzy spells. I lost 20 pounds in eight days. I’m 6-foot-3. I was down to 138 pounds. I could put one hand completely around my bicep. I could put two hands around the top of my thigh. I looked like a ghost from Dachau.

When it happened I was two days hike from the nearest road. What did you do on New Year’s Eve 1978? I was throwing up my guts in a bamboo-thatched outhouse in Northern Thailand.

Yes, I did get a typhoid innoculation. Here’s the myth about innoculations: They don’t keep you from getting sick. They keep you alive. I put my head down and walked, without food, for two days to the nearest village. One bowl of soup resulted in a mad dash to a jungle outhouse where I got attacked by rats coming up from the hole in the floor. I made it to the major Northern Thailand city of Chiang Mai where they pumped me full of antibiotics, penicillin and glucose. No help.

I took a very painful overnight bus ride to Bangkok where I called my parents to say I was headed to the hospital the next morning. My mother was old enough to remember as a child when entire small towns in the U.S. were wiped out by typhoid. She immediately wired me $250 as I went to a local clinic specializing in VD.

This was 1979, pre-AIDS and I think I’m the only male alive to visit Bangkok and not have sex. I walked into this clinic and I made a zombie look like George Clooney. My eyes were bloodshot. My hair resembled a snake’s nest. My skin had a weird orange tint. My tongue was swollen. This Swede waiting to get treated for syphilis took one look at me and said, “My GOD! Who were YOU with?”

There is a happy ending here. After the clinic gave me another dose of medicine, the next day I didn’t vomit for the first time in four days. I built up enough strength to move on to Phuket, with my mom’s generous gift going to fresh seafood and beer. The typhoid also built up an immunity system stronger than a bank vault. I never missed a day of work due to illness in 40 years. Then came Germany and my new rule of the road …

DO NOT, WHEN RACKED WITH FLU, SIT IN 38 DEGREES IN A SOCCER STADIUM FOR THREE HOURS. Part of my assignment was to attend a Bundesliga game and capture atmosphere in the best attended soccer league in the world. Eintracht Frankfurt hasn’t won a league title since the Bundesliga’s inception in 1963 yet still fills 50,000-seat Commerzbank-Arena almost every game. Cheap tickets. Beautiful stadium. Tradition. They all help. Also helping attendance is the kilometer-long road from the tram stop to the stadium lined with beer stalls. The walk to the stadium was one long frat party.

I sat in my press seat coughing so much I couldn’t have asked a question in the mixed zone afterward even if the one American on the team, Timotny Chandler, deemed me worthy to grant an interview. After the game, I had to weave through seemingly an entire nation of drunks. Women helped steady plastered friends onto the sidewalk. Men yelled obscene songs where translation was not needed. Fans stumbled horizontally on the dark sidewalk, glass beer bottles waving dangerously in hand. At the tram stop, I saw a man wheel an adult with severe cerebral palsy onto the edge of the platform. The man in the wheelchair was spilling his beer all over his lap. Even he was drunk!

For two days prior to the game, I laid in my AirBnB and stared at the ceiling, too weak to read, eat or move. The flu epidemic that has hit the U.S. has hit Europe, too. Alone, in pain and frustrated, I alternated between shakes from chills as if I sat in the stadium naked and sweats from a fever that made me think I was back in the jungle in Northern Thailand. I managed to take a tram to the train station pharmacy where they gave me menthol lozenges. They offered temporary relief but not enough to counteract a trip home that seemed like a return from Jupiter.

Part of RyanAir’s poverty-level discount fares is a bus connection from the Frankfurt airport to Cologne, 115 miles to the north. An airport shuttle bus took me to the FlixBus terminal on the fringes of the airport. The FlixBus terminal has no lobby and the lone seats are on a cement, uncovered platform, a lovely place to spend 90 minutes with the flu in 38-degree weather. How’d I stay warm? For 90 minutes I sat on the floor of the heated bathroom like a stray dog. In my delirium I asked myself, Where the hell am I? Rural Kazakhstan?

When I finally managed to land in Rome that night, Marina was there to greet me — with the flu. I happened to land in a two-hour window where she had enough energy to drive. We hacked and sniffled and shivered all the way back to my place where she dropped me off and went home to sweat out her own illness.

We’re fine now. Good pizza, pasta and wine are great Italian medicine. So don’t let potential illness discourage you from venturing into strange unknowns. When I sit around with fellow travelers, the best stories don’t revolve around museums, hotels and beaches. They often center around travel tales from hell, feverish hikes and strange clinics and foods of questionable origin. To truly travel, one must truly suffer. It’s the nasty little side effect of adventure. So is one other symptom.

I am dying for a sausage and a beer.