(LAST OF A THREE-PART SERIES)

HELGAFELLSSVEIT, Iceland — I firmly believe much of Icelandic cuisine is based on a dare.

They eat whale in Iceland. They eat puffin. You’ve seen whales. Ever seen a puffin? It’s a cute, little black-and-white bird with a bright red beak. It’s meant to be photographed, not eaten. At one AirBnB, a traveler brought in a package of hardfiskur. That’s wind-dried haddock. Calling it “fish jerky” is an insult to all jerky. Picture spoiled carp with the general texture of shrapnel and you have hardifiskur.

But the greatest of the gross, the lowest of the lousy, is a food so vile its legend — not to mention its aroma — has reached every corner of the globe. It’s called hakarl. If you know Iceland, you know hakarl. You just didn’t know the name, nor can you pronounce. In Icelandic’s inane pronunciation guide, you say it HOW-kaht. That’s Icelandic for fermented shark. (At one time, it was called rotted shark. However, they changed the name after changing the preparation process not to mention for PR purposes.)

While talking to Icelanders around the country, they’ve all tried it. It’s an Icelandic holiday tradition, kind of like American fruitcake but much worse — if that’s possible.

As a food writer, I’ve had to hold up our reputation for getting down and dirty with the most disgusting foods that keep mankind alive. As a traveling food columnist for The Denver Post for eight years, I forced myself to down some foods that required a six-pack chaser: sheep penis in China (Chinese believe animal penis promotes virility which helps explain why there are 1.4 billion Chinese), four-inch-long flying cockroach-like insects in Cambodia called a kadam tuk (you dig into their back and scrape out their eggs), ambuyat in Brunei (a gelatinous matter found in sago trees with the texture of papier mache). People ask me what the most disgusting food I’ve ever eaten. I always say it’s a tossup between live beetle larvae in the Amazon (they actually move in your hand) and a bacon cheeseburger at Hooters (one lawyer from Atlanta wrote in and asked, “Hooters has food?”)

I was told and read that hakarl would, pardon the pun, hurl them all aside. Icelanders told me, “The only thing worse than the smell is the taste.” 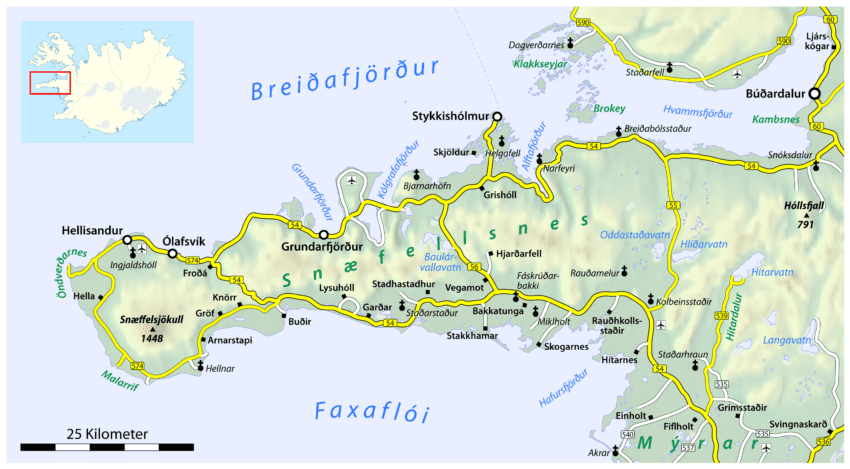 Spoiled cheese. Urine. Cleaning fluids. The descriptions of the tastes alone made me want to keep driving as I passed the big shark sign indicating the cutoff from the main road.

I found the center of the hakarl universe on an isolated farm called Bjarnarhofn in the little region of Helgafellssveit. The Bjarnarhofn family have harvested Greenland sharks on the northern coast of West Iceland’s Snaefellsnes Peninsula for 400 years and is the leading producer in the country. The farm consists of a small museum (www.bjarnarhofn.is) and display room, perfect for tastings, although the bathroom is inconveniently located down the hall, too far for one little boy who blew chow after thinking the shark bit was a Jujube.

The museum is filled with knick-knacks from around the area: stuffed birds, ship wheels, model boats, old photos. On one wall are photos of fishermen next to sharks hanging up from boat hooks. The sharks are twice as tall as the men. And UGLYYYYYY! Greenland sharks don’t have the trademark pointy nose. They’re blunt faced, as if they spend their days underwater running into sea walls.


The guide is a little Italian woman named Maria Stella Faccin. She’s from Rimini and doesn’t miss Italy after living in this natural paradise that is Iceland. She was a bundle of enthusiasm and a wealth of information about the sad, dark, isolated world of the Greenland shark. She gathered us in front of a video screen and told us that the Greenland shark is the fourth largest in the world. It grows to seven meters and 1,200 kilos. It’s Iceland’s only shark. And here’s the catch: It’s the most toxic shark in the world.

Greenland sharks (they just sound mean, don’t they?) live in the North Atlantic between Greenland and Iceland. They swim three to five kilometers deep, meaning the water that nearly paralyzed my hand on the south coast is even colder, between 30-40 degrees. To protect itself from the cold, the shark produces a natural antifreeze. Also, its urine circulates through the body to keep it warm, although Icelanders frown upon freezing tourists who do the same.

Both are highly poisonous.

So these shark farmers, instead of buying them in the ground for weeks as was the old tradition, ferment the sharks for six to nine weeks in a fermentation room. Then they hang them in a special drying room for three to four months. After that, they are ready to eat. No cooking. No browning. No frying. Nothing.

“It forms a brown crust which makes it look like it’s smoked,” Faccin said.

This is one of Iceland’s oldest practices, something that has nearly died out the last 70 years. In the 14th century, they were prized sources of — get this — electricity.

The Greenland shark has an enormous liver. It makes up 1/10th of its entire body, meaning the liver weighs 100-150 kilos. If you boil it, you’ll get oil. That oil was sold all over Europe to light street lamps. In the 1910s alone, 32,000 Greenland sharks were killed. However, when the advent of electricity took hold, the Greenland shark wasn’t needed.

So why did I see sharks hanging from hooks in photos around the museum? Maria said the farm uses only sharks accidentally caught in fishing nets.

“Why don’t the fishermen throw them back?” I asked, forgetting that it’s not exactly like throwing back a brook trout.

She said the shark’s odd breathing system doesn’t allow them to stay stationary. When they get trapped in nets, water can’t flow into their gills and they drown underwater.

How they became food is a little like the first guy who ate milk. Can you imagine how brave he was? Think about it. Some farmer told a guy, “See that thing hanging under the cow with the spigots sticking out? Squeeze one of them and drink whatever comes out.”

In the 16th century, fishermen buried the leftover shark parts underground to dispose of the meat — and also the smell. One day someone dug up the shark . It was all dried up. He ate it. He didn’t die.

And a disgusting Icelandic eating tradition was born.

It is sold to restaurants all over the country but Icelanders really only eat it at some traditional holiday feasts. It’s to remind them that they are Icelanders and have a reputation for eating food unsuitable for UNICEF.

“Shut up and eat your puffin, Thor.”

I asked Faccin about the Greenland sharks’ current status as “near threatened” despite being protected by the European Union.

She said, “We only do 60-80 sharks a year on average. We’re the only farm in Iceland. Some do one shark a year. On a world basis, that’s not many at all.”

According to the World Wildlife Fund, Greenland sharks are also threatened by climate change and diet, as increased development in the Arctic areas has put more waste in the ocean. Little is known about the Greenland shark as they spend so much time at such depths where marine biologists can’t record numbers. The WWF is backing the University of Windsor’s efforts to tag and track them as part of the Ocean Tracking Network which works with marine biologists around the world.

In Greenland, the shark is used for emergency dog food.

“All it does is get them drunk,” Faccin said.

On the wall are some of the things found in sharks over the years: the skin and bones of a polar bear, a partially digested seal, the tail and skull of a baby whale.


It finally came time to try one. I suddenly regretted eating such a huge breakfast in my AirBnB in Stykkisholmur 20 minutes away. Sitting in little glass bowls were small white rubbery squares. Next to them were little pieces of bread. What, we’re supposed to eat it like an hors d’oeuvre?

“Eat it with the bread,” Faccin said. “It takes some of the taste away. But then try it without the bread.”

I tried the first method and all I tasted was bread. The shark was merely a rubbery texture. Then I tried it without garnish. I braced myself, like awaiting a shot from a needle the size of an epee. I put it in my mouth and chewed.

It wasn’t bad. Really. It wasn’t disgusting at all. It smelled a bit like ammonia but the taste was kind of smoky, much more smoke than urine. (I can’t believe I just wrote that sentence.) Maybe I didn’t get a particularly pungent sample. I tried another. Again, decent. I had another. I was starting to develop a taste for something Gordon Ramsey couldn’t keep down.

“See? It’s not bad,” said Faccin who proudly says she eats it every day.


I wouldn’t serve it at my next terrace aperitivo in Rome but it definitely doesn’t deserve it’s, well, putrid reputation. At least, it doesn’t make my top five worst foods.

And at only 12 euros for the museum tour, it’s the best food bargain in Iceland.