In an Italian housing market reaching a crisis stage, this man is raffling his Abruzzo home for $65


Owning a home in rural Italy is as romantic as it sounds. Wake up to sunshine nine months a year, see rolling green hills above pretty, undisturbed meadows. Shop for fresh food every day in open-air markets and walk along millennium-old, cobblestone roads meant only for foot traffic. If you’re lucky, as I chronicled about a California man who moved to Umbria with his wife, you’ll find a house with a small vineyard and turn it into a fledgling wine business. Yes, buying a house in Italy is the stuff of dreams.

But try selling one.

In the last few years, that has become a nightmare. Italy is one of the few countries in Europe where property prices are going down. According to ISTAT, Italy’s national statistical institute, last year Italy’s property prices dropped 0.8 percent, the most in Europe next to Sweden’s 2.1. Doesn’t sound like much? Italians have price envy of Slovenia (up 15.1 percent), Holland (10.2) and Ireland (9.1).

Well, one man has found a way to beat the market: a raffle.

Jamie Abbott, originally from Colchester, England, is raffling off his three-story house in a village in rural Abruzzo, maybe the most underrated, prettiest, unspoiled region in Italy. He is selling raffle tickets for 50 pounds (about $65) and will hold the drawing in October.

Like so many homeowners in Italy, Abbott has become a victim of the housing crash. Somewhere between the time writer Frances Mayes made a house in Italy cool with “Under the Tuscan Sun” in 1996 to Italy’s current recession, a house in Italy went from cool to ice cold. 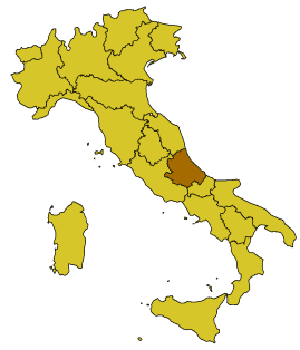 “The property market is so bad, that even for a gorgeous house like (this) … it was getting a lot of interest in property circles,” Abbott said by phone Wednesday. “People loved the house because in this particular area it’s almost impossible to find a detached house with a garden near the historical center of the village. So it was getting a lot of interest but people just weren’t going any further than that.”

The house is 120 square meters (about 1,300 square feet) with three bedrooms and two bathrooms. It features curved brick and stone ceilings and vines stretching over the door frames. It has great views of the surrounding countryside, situated near the southern Gran Sasso mountains and just under 8,400-foot Monte Prena.


It’s located at 850 meters in the village of Carapelle Calvisio, just 18 miles from the Abruzzo capital of L’Aquila on the edge of the Gran Sasso National Park. With only 90 inhabitants, Carapelle Calvisio wears the crown as the smallest town in Abruzzo. The former Roman village is known for its truffles and is so picturesque it was used as the setting for “Ladyhawke,” a 1985 medieval fantasy film starring Michelle Pfeiffer and Rutger Hauer.

Abbott, 42, and his wife Lea went all out in making this raffle happen. He hired a web man to put together a lovely website, complete with video and is spreading the word by strategically leaking publicity on Facebook group pages and travel websites such as mine. They have a Facebook page and Instagram account (your_italian_house). As a fellow expat, and a lover of Abruzzo, I’m helping him.

Financially, it makes sense. Abbott has 6,000 tickets available. If he sells all of them for 50 pounds each, it will earn 300,000 pounds (about $400,000). That’s more than the property is worth. He is also raffling a second prize of 10,000 pounds ($13,200) with five third prizes of food and wine hampers. First prize also includes all notary costs, car rental and flights from anywhere in Europe.

“We’re just being as open and transparent as possible,” Abbott said. “We want to give the raffle authenticity to make it personal.”

House raffles have been successful in Great Britain for years, but in desperate Italy they’ve gone past raffles and are practically giving away houses. Last year the dying village of Sambuca, Sicily, announced it would sell houses for 1 euro. Two catches: Buyers had to commit 15,000 euros for renovations and put up a security deposit of 5,000 euros.

It didn’t put off many. Tens of thousands responded, including U.S. lawyers who wanted to do business and a Dubai woman who wanted to buy dozens of houses. The local mayor had to put up the town’s first stop sign — in the form of a No piu! (No more!)


Another mayor in Bormida, Liguria, posted an announcement of 2,000-euro bonuses for anyone relocating there. After 17,000 applications buried his office, he quickly removed the proposal, saying it was only an idea to the regional government. In January 2018 the town of Ollolai in Sardinia sold 200 uninhabited houses for a euro each. Gangi, Sicily, has sold homes for 1 euro since 2014.

Sound desperate? You’re right. This is the Italian real estate market’s equivalent to global warming. Italian authorities predict half of Italy’s smallest towns will become deserted in the coming decades. Abbott is aware of the skepticism. It’s one reason he’s avoiding the mass publicity by advertising in the big European dailies.

“People are like, It must be a scam,’ because it’s too good to be true,” he said. “We’ve published this on many group pages, like Facebook. But before they even look at the site they instantly come back with a cry of ‘Scam! Be careful.’ I personally reply to every single one of those saying actually it’s not. We’re trying to be open and transparent. Fifty percent come back and go, ‘OK, my apologies. My bad. Because I didn’t read it.’”


He set the price at 50 pounds to insure people are willing to make the commitment if they do win. Unlike the homes in Sicily, this home needs no renovation. In fact, because the national park is between the house and L’Aquila and its foundation is natural rock, the house suffered no damage during the 2009 earthquake that destroyed much of L’Aquila and killed 308 people in the area.

Unfortunately, despite the evidence, not many want to buy in regions where people get buried in their own homes. Combine that with a general downturn in the foreign market to buy second homes in Europe and you see what Abbott is facing.

I asked him, so why sell at all? He has an online rustic Italian antique business and wanted to sell the house to start another project. He currently rents it out as an AirBnB and lives in the nearby village of Caporciano.

He does not want to leave Abruzzo. We both agree it’s one of Italy’s best-kept secrets. He first discovered it about 15 years ago when he rode an old Italian Vespa motor scooter from London through France, Spain, Corsica and Sardinia onto the Italian mainland and then to Abruzzo, the region just east of Rome’s Lazio.

“There’s so much to do here,” he said. “It’s like going to Tuscany but it’s completely undiscovered. You feel you’ve got something to discover and explore. It’s not overrun with tourists, even in the height of high season in August. You can hike on your own. There are lakes. You can ski in the morning, you can swim in the afternoon in the sea. You’ve got massive diversity of landscapes and within half hour of the house there are four national parks, one of which the house is literally on the doorstep.”


Ticket sales end Sept. 30 and the raffle will be held sometime in October depending on the notary.