In Bruges: Medieval fairy tales do come true in one of the sparkling pearls of Northern Europe


BRUGES, Belgium — There’s a scene from “In Bruges,” the 2008 dark comedy about two Irish mobsters carrying out a hit, when hitman Colin Farrell laments about getting stuck with this assignment in a freezing town in Belgium.

“I grew up in Dublin,” Farrell says. “I love Dublin. If I grew up on a farm and was retarded, Bruges might interest me.”

It may be difficult to appreciate Bruges if you’re in town to murder someone while fighting demons from your past and a nasty fetish about dwarfs. Maybe Hollywood used Bruges as an extreme example of Farrell’s total indifference to the world around him. As his partner, played by Brendan Gleeson, says in exasperation, “You are about the worst tourist in the whole world.”


After all, who can not love Bruges? Let’s see, you combine the best beer in the world with the best chocolate in the world, put them in the middle of a town that looks like a backdrop for medieval fairy tales and you have Bruges. If you don’t like chocolate or beer or scenery right out of an oil painting, you’re obviously an alien from another planet who can’t read Roman letters and aren’t reading this anyway.

So, dear reader, this is a love letter to one of my new favorite cities in the world. After 100 countries, dozens of capitals and hundreds of cities, towns, villages and truck stops, Bruges climbed near the top of the rankings. It’s not off the beaten path. The cobblestones on the narrow roads have been nearly beaten even from the 1.8 million tourists who pour in every year. But this is one of the planet’s magical places. It makes you stop, gasp and refuse to move, trying to soak in the views knowing it’s hopeless to find the words.

Then you go get a beer. 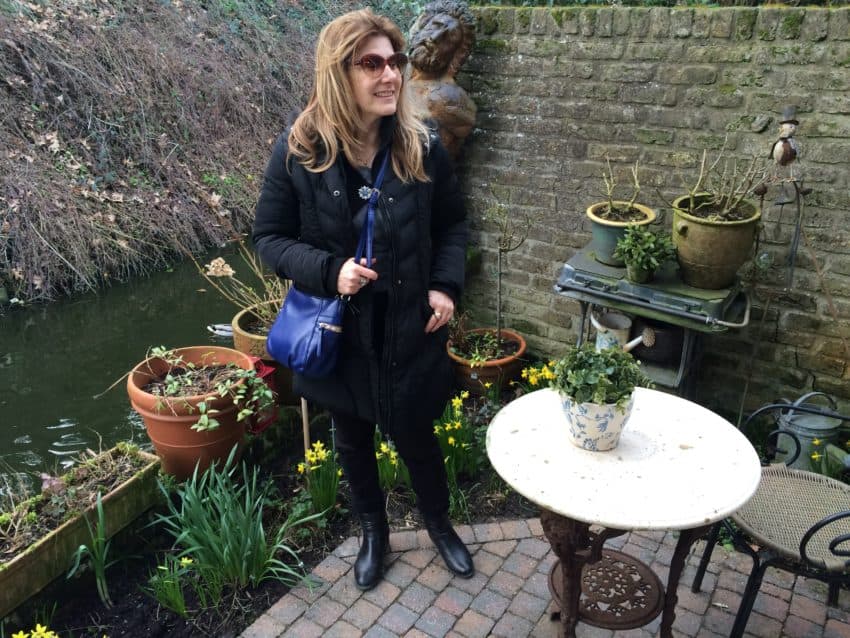 Marina, my uber photographer/girlfriend, had never been to Belgium. I had never been to Bruges. It’s the perfect weekend getaway from Rome: a 2-hour, 15-minute, $84 Alitalia flight to Brussels then an hour bus ride to Bruges (Brugge in Flemish) 10 miles from the Dutch border. We left Rome at 8:25 a.m. and by 1 we were sitting on the back porch of our B&B watching ducks float down a little creek below our feet. Baert, our charming B&B owner, left us in the minibar a big bottle of Brugse Zot, a beer so tasty I wanted to sniff and swirl it like an expensive Italian wine.

Bruges (pop. 117,000) is a beacon in a country slowly growing dark. Belgium is racked with a growing reputation of a breeding ground for terrorism. Brussels Airport officials have their description of the March 2016 terrorist attack that killed 35 down rote for all inquiring travelers — like me. The European Union, based in the capital, is crumbling like last week’s waffle. Brexit is pulling out the United Kingdom and France might elect a female Mussolini and leave, too. Strikes are everywhere.

But Bruges may be too charming for even terrorists to bother. The city managed to escape World War I and II relatively untouched, as if the Allied and Axis powers decided this is the one corner of Europe not worth turning into rubble. When we made the windy 10-minute walk to the city center, the Markt square (You don’t spell “charm” with an “e”) opened up like your favorite Christmas present.


Picture a square 10,000 square meters covered in cobblestones and lined with buildings dating back to the 13th century. It is closed to all but foot traffic and the occasional horse-drawn carriage. Towering over the entire square is the 83-meter-high Belfry of Bruges. The brick bell tower dates to the 1200s and took me more than 80 minutes to negotiate the 366 steps to the top: 60 minutes in line, 10 minutes of climbing and 10 minutes squeezing past seemingly all 1.8 million visitors descending a narrow spiral staircase that is a claustrophobe’s worst nightmare. But the panoramic view would attract anyone. Behind the square I could see windmills from the region’s growing turbine industry and red-tiled roofs dotting the countryside.

From the top of the spire, I looked down and saw Marina fiddling with her camera in the middle of the Markt. She was leaning up against a huge green statue along with various backpackers, couples and locals grabbing a smoke. They were likely oblivious that above them stood in marble Pieter De Coninck and Jan Breydel, the local leaders of the Bruges Martin, a nighttime massacre of a French garrison in 1302. Breydel, the namesake of the local pro soccer team’s stadium, and De Coninck led the way to an independent Bruges that has remained to this day. It was one of Europe’s leading trade centers in the 1300s and a century later had 200,000 people, double the size of London. During the Renaissance, Bruges became a center for Flemish artists, the rock stars of their day.

However, rising taxes, revolts and a port overgrown with silt plunged Bruges into a 400-year tailspin. Since the world wars, Bruges has reinvented itself with manufacturing of such industries as glass, chemicals and electrical goods. Zeebrugge, Bruges’ port (Bruges on Sea), has been fully operational for 100 years.

Bruges is back, like the daughter of a famous starlet, looking beautiful and cultured and wealthy.


There is no better way to see Bruges’ true beauty than by a canal ride. It’s one of the schlockier things you’ll ever do. You stand in line at one of the small docks along the canal where 20 small, packed boats take tourists clicking so many photos you feel like you’re in a field of crickets. But some things are touristy for a reason: They’re worth doing. This is.

Every house, every building, every structure in Bruges is different. “They’re all like us,” the driver/guide told us. The only thing uniform were the red-tiled roofs of the houses, giving Bruges an artsy symmetry similar to Tuscany or towns along Croatia’s Dalmatian coast. St. John’s Hospital is still operating after 829 years and so is the smithery that opened in 1245 as is the fish market since 1821. We passed by the gargoyles ringing the 15th century Stadhuis palace and motored under many of Bruges’ 43 bridges, each one seemingly supporting a rollicking beer garden.

If a town can sparkle, Bruges does. It’s not the sun reflecting off the canal water. It’s not the laughter drifting over all the frothy beer mugs. It’s that Bruges feels like a medieval town without the tourist trappings that would turn it into a theme park, the canal ride notwithstanding. In Belgium, Brussels has a gritty edge to it. Liege has too much industry. But Brugge absolutely preens. It’s hard to find poverty in Northern Europe. In Brugge you sense the wealth but not the pretentiousness. Belgians are notoriously funny people. In Brugge, everyone seems as if they just walked out of a comedy club.


We got a first-hand look at the high-end Bruges our first night. What looked like another hair-pulling search for an obscure restaurant turned out to be one of the best dining experiences of our lives. Marina had found on The Fork, a terrific Internet source for international dining, a restaurant called Tire-Bouchon. As the taxi carried us past the larger canal that encircles the historical center like a moat, we could tell we were eating off the beaten path. We passed beautiful A-framed houses, well-kept lawns and nice cars parked out front. We were in the heart of residential Bruges.

We also took it as a good sign that the cabbie had no earthly idea where the hell Tire-Bouchon was.

He finally stopped at the given address. We saw no sign. We saw only houses. We knew we were close. A van parked out front of one home read “Tire-Bouchon.” Marina and I exchanged shrugs with the driver and I rang the bell. Opening it was a big, jolly, chubby man with a full gray beard. He wore a chef’s smock and a smile.

Franz Verplancke owns a wine store in Brugge and cooks on the side. Every Friday for the last four years, he has thrown a dinner party for more than just friends. He also does it for visitors. He travels to the south of France every month to collect ingredients, and the menu changes with the seasons.

We sat down at a big dining table sporting two pink candles and pink place mats with two older couples from Brugge. We feasted on a four-course meal right out of a Gourmet magazine field trip. He started us with a local cocktail made of Broker gin, tonic water and red berry syrup. Then came the courses:

* Goat cheese salad with honey from chestnuts from the South of France.

* Pork stewed in its own juice with vegetables, (Verplancke said this was the first dish ever printed in a French cookbook.)

They were all washed down with carefully paired French wines from some of his 321 bottles imported from South of France. For 27 euros each, the meal is as good a bargain as you’ll find in Europe.


As we walked around Brugge, however, we noticed something while stopping at chocolate shops seemingly on every corner. The only fat people we saw were tourists. How do Belgians fit on their bicycles with beer, chocolate and a cuisine heavily influenced by every fatty delicious ingredient known to France? We asked a bartender as we sat down for a pre-dinner brew before dining at Resto Mojo where I had baked cod with North Sea shrimp in a lobster cream sauce.

“We eat chocolate every day,” he said, adding that it’s quality not quantity in Belgium. “But we eat healthy. And we ride our bikes.”


Yes, Belgium has the ninth most bicycles per capita with 48 percent of the 7.8 population owning one. Bike racks in Bruges are as crowded as a teen-ager’s closet. The pubs overflow just as much, a remarkable marketing achievement considering how many bars doing business. This is a country that has 1,150 original Belgian beers. Go to a real Belgian pub and the ceiling is lined with glassware of every shape and size imaginable, each one formed specifically for the different ingredients in each beer. We settled into a corner pub above the canal called 2be Beer Wall. It serves 1,725 beers, not all Belgian, and all of them displayed on a wall the size usually reserved for gymnasiums.

We went outside and sat at a long steel table with umbrellas, listening to the ducks and the tourists floating down the canal. I ordered a medium Kwak, a terrific strong amber at 8 percent alcohol, relatively mild by Belgian standards. But nothing is small on the Belgian beer scene and they served it to me a flute-like glass about a foot and a half high, so big it came with its own wooden carrying case.


It made me think of the end of “In Bruges.” Gleeson throws himself out of the belfort, hoping his spectacular landing would warn Farrell that his target had turned the tables and was gunning for him. The ending was a sensational disaster for every character involved, even the dwarf. But then I thought, when the director yelled “CUT!” a lot of beer mugs and smiles soon rose over the canal.