In Sicily: In search of the world’s best cannoli


CROCCI, Italy — It was Columbus Day Monday, that day when Americans argue over whether Italy’s finest explorer, Christopher Columbus, discovered America or was it the indigenous people who were already there. Controversy aside, setting sail across the Atlantic in the 15th century took some major palle and set up some pretty fair exploration from Italians. Fueled by their quest for knowledge, if not matching their courage, I set out on my own exploration Saturday night. It was a quest that would inspire mankind and feed a hunger in me. Call it …

… in search of the best cannoli in Sicily.

It’s a worthy journey. Anyone who has tasted that sweet ricotta cheese filling oozing out of a hard crust like cream from a bonbon knows it’s one of the world’s greatest desserts. Every Sicilian around the world who has put up a shingle on a restaurant, from Palermo to Portland, serves cannoli. You’re never the same after one. Then again, neither is your stomach.

Here in Sicily, where my lovely Marina and I came for a long weekend, cannoli is one of the four major food groups. On the island of Favignana, just four miles off Sicily’s west coast, every bar, cafe, trattoria, restaurant and practically bike shop carries cannoli. I had one after every meal. We had one for between-meal snacks. By the time we hopped the hydrofoil back to Trapani on the mainland, I was about ready to liquify one over a match and inject it in my vein. 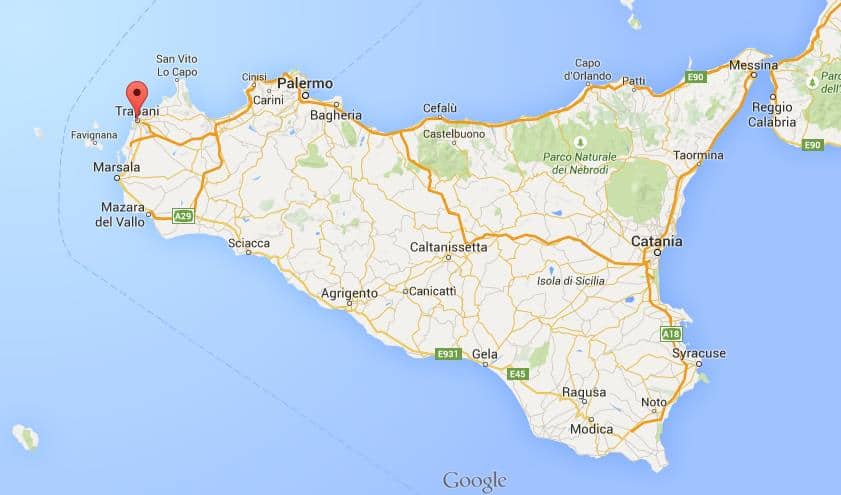 On the mainland I mainlined. We met our good trapanese friend, Giuseppe, for dinner at Cantina Siciliana. As the name implies, it’s as traditionally Sicilian as mandolin music at a Palermo wedding. It’s in a back alley away from the bustling port and glitzy main drag of Corso Vittorio Emanuele. Dolls that look like witches hang from the ceiling in a nod to the neighborhood’s past life as a theater district. The prices are also Sicilian. I had scrumptious busiate, the traditional Sicilian twisty pasta that looks like a thin, yellowish barber pole. Served with tuna roe, tomatoes and almonds from Sicily’s Baroque Triangle town of Noto, it was only 12 euro. It was one of the best meals I’ve had in Sicily, my favorite food region in Italy.


Giuseppe is a graphic designer, like Marina, and he brought his colleague, Patrizia, who is also a graphic designer. They had plenty to talk about. But then, as in every conversation in Italy, the subject soon came to food. We were finishing our last glass of Grillo, a terrific white wine from Barone on Sicily’s east coast, and Giuseppe and I started talking about one of Sicily’s favorite subjects.

“You want to try the best cannoli in Sicily?” he asked me. He may as well have asked a junkie, “Do you want the best high of your life?”

It was 11 p.m. And we were goin’ on a road trip. We walked out onto the quiet, dark alley and squeezed into Patrizia’s Fiat 500.

“It’s in the countryside not far from here,” Giuseppe said. “But no one from downtown goes there. Not people like me. Only people from the town.”

The village of Crocci lies about six miles east of Trapani on SP52, a highway that goes through farmland and olive groves.

“Is this mafia country?” I asked, playing the role of a dumb American tourist.

“Not far from it,” Giuseppe said. In fact, Crocci is only 60 miles from the famed town of Corleone.


Crocci has a population of 461. It seems all 461 people are in Avenue Cafe di Pollina Pietro, a drab name for what could be the best cannoli in Italy and, thus, the world. They weren’t there for the cannoli. However, looking at the size of the locals, they’ve already had their fill. They had packed the bar for Crocci’s Oktoberfest. Italians, particularly in the south, aren’t big beer drinkers. That’s why I saw a direct correlation between the huge liter-size beer mugs being served and the noise erupting from the adjacent room.

Giuseppe walked me to the cafe counter where inside a glass case I saw cannoli so large they looked straight out of Ripley’s Believe It or Not museum. These were at least 10 inches long, twice the size of cannoli I’ve seen anywhere else in Italy. They were 2 euros each.

An advisory to all Americans: The term “cannoli” is plural. One is called a “cannolo.” It’s similar to panini. One is a “panino,” which always baffled the clerks at Panera whenever I ordered one in the U.S. “Cannolo” actually comes from the Sicilian word “cannolu” which means “little tube.”


The cannolo tradition in Sicily has somewhat of a controversial, steamy past. It dates back to the 9th century when the Arabs controlled Sicily and cannoli were served at the harem of Caltanissetta in the Sicilian hinterland. Apparently, cannoli improved fertility which explains why so many Sicilians have Arab blood today. While the story probably has more sex appeal than truth, it is true that the Arabs brought sugar cane to Sicily in the ninth century.

The more tame legend is that nuns in the convent near Caltanissetta made cannoli to celebrate Carnival.

What is definitely true is what makes cannoli maybe Italy’s favorite dessert. It is a round tube of fried pastry dough filled with rich, creamy ricotta cheese spiked with sugar. Sometimes it’ll be laced with chocolate chips or lined with chocolate or pistachio. But those are found on the mainland. Here in Sicily, I once asked for a cannolo with chocolate and the man laughed and shook his head. I felt like an Italian in the U.S. asking for a hotdog with Nutella. In Sicily, you find only tradition.

What separates Sicilian cannoli with those found elsewhere is the tube. It’s crisp. It’s crunchy. You almost need a steak knife to cut it. Some cannoli tubes in the U.S. are as soggy as a rain-soaked sock. And most cannoli in Sicily are “preparati al momento” (prepared at the moment), meaning they’re always fresh.

Giuseppe put one of the cannoli in my hand and it doubled the width of it. This cannolo isn’t a dessert. It’s a weapon. Giuseppe gingerly cut the two cannoli in halves and Marina, always watching her diet, looked at the slab in front of her and nearly fled the room. I dug in. The thick confection of ricotta cheese had the consistency of gelato and was nearly as sweet. It was almost too much. I had to break off pieces of the tube to give my mouth some context. But I didn’t waste a drop. It fed my growing addiction. I nearly inhaled it like a milkshake through a giant, fila-dough straw.

As the patrons filled themselves with beer, none of their stomachs could’ve been as jammed as mine as I waddled into the night. It was midnight and a hotel room back in Sicilian civilization awaited. As I laid on the bed and groaned, something made me wonder.

What dessert did Columbus bring on his ships?