The 15 hulking men in black stomped the Olympic Stadium turf with their feet. Their hands pounded their thighs as if summoning a Bengal tiger onto their laps. They slapped their biceps. They stuck out their tongues. Their eyes bulged. They screamed an indecipherable chant in a Maori language so thunderous over the on-field mike it seemed to reverberate all the way to the South Pacific.


As I sat in jam-packed Curva Sud, the A.S. Roma ultras’ one-time home that has long since gone quiet, I sensed for the first time this growing phenomenon on the Italian sporting scene. Italy, the winner of four soccer World Cups and where soccer rivalries resemble provincial wars, has gone rugby mad. And on Saturday, the rabid rugby fans were treated to the Alabama Crimson Tide of world rugby.

New Zealand’s All Blacks won the last two World Cups in 2011 and 2015. They won the inaugural one in 1987. The only thing more fierce than their pregame Haka, taken from the Maori war cry, is their play. From a nation of only 4.6 million, just less than the state of Louisiana, they have become the standard bearer for a sport that is transcending the globe.

It’s not easy for a sport to break soccer’s stranglehold in Italy. Baseball has had a pro league here since 1948 and it still draws no better than American Legion games. Italy has one of the world’s top pro basketball leagues and draws well in pockets but only garners the occasional story in the national sports dailies. Pro football is strictly at the semipro level. The NFL has never even considered testing the market here. 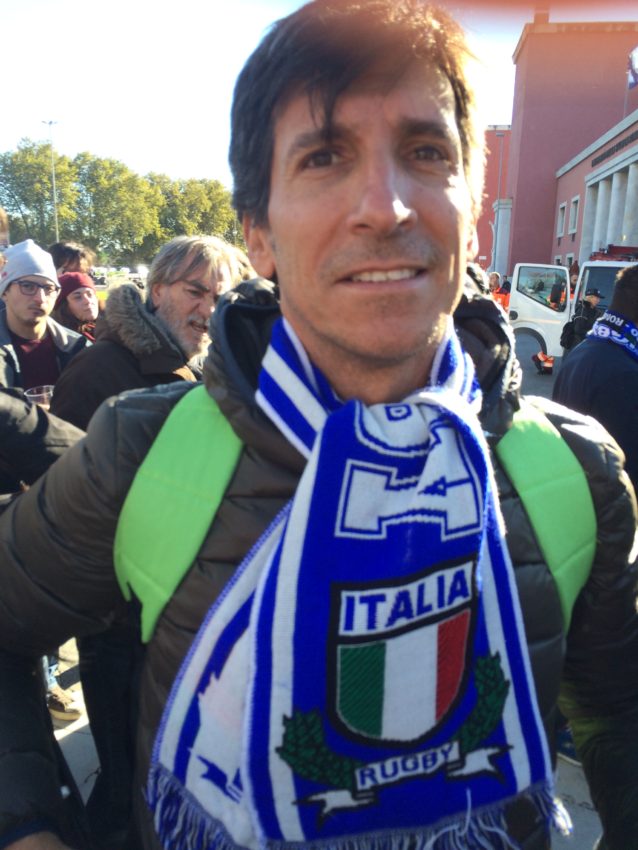 But rugby? I’m waiting to see scrums form in my local piazza. Sunday’s crowd of 62,000 for the friendly match was not an anomaly. Italy competes every February and March in the Six Nations rugby tournament along with Wales, England, Scotland, France and Ireland. The Italian Rugby Federation receives 20 million euros for participating and sells out nearly every game all over the country. It’s remarkable considering one factor: Italy sucks. In the 17 years of the tournament, it is 12-72-1. No matter.

ANSA, Italy’s national wire service, has its own rugby writer. He just happens to be my best friend, Alessandro Castellani. He has talked to sponsors, 10 of which give 7 million euros a year to a sport that is a losing proposition only on the field. Rugby has struck a chord in Italy where its biggest heart is.

“There is no violence in rugby,” Castellani told me. “Opponents’ supporters are friends. People inside the stadium are mixed. Everybody is my friend in rugby. That’s why many families go see rugby. In soccer, that doesn’t happen anymore. You don’t see many families at Roma or Lazio games.”


No following in rugby is like the All Blacks. Combine Manchester United, the New York Yankees and Lebron James and you have what the All Blacks mean to world rugby. It’s why Ireland nearly declared a national holiday when it beat the All Blacks in Chicago Nov. 6, their first win over the All Blacks in their history, covering 29 games and 112 years. It was also the All Blacks’ first loss in their last 19 games. In fact, I acquired a ticket by the blind luck of having a New Zealand friend since 1998. Michael Dixon and his wife, Shawn Bishop, hosted me on a visit to New Zealand and I returned the favor. As pseudo payment, he took me to the game. (He WAY overpaid. I think I arrived from Denver to their home outside Auckland with buffalo jerky.) He didn’t come to Rome to see the Colosseum or Forum. He came to see his All Blacks on their season-ending northern tour. Like so many other All Blacks fans, he has followed them all over the world, even going to England for last year’s World Cup win.

On Saturday, over a hearty aperitivo and artisan Italian beers at my favorite neighborhood birreria, L’Oasi della Birra, we talked about New Zealand rugby. If the game hadn’t started in three hours, we’d be still be sitting there.

“If the All Blacks win, the country’s in a good mood,” said Dixon, a retired accountant. “Back in 1999 when the All Blacks bungled out of the World Cup shortly before a general election, it was widely indicated that was the death knell of the sitting government. And shortly thereafter they lost power.”

“The country gets angry and somber and wants to do something about it,” he said. “This election was only a couple weeks after the All Blacks came home with their tails between their legs.”

I asked how such a little country could be so good in a team sport that requires a lot of players. When you think of New Zealand, you might think of bungee jumping. You might think of Russell Crowe (he actually has spent most of his life in Australia). But mostly you think of rugby. One theory is the Kiwis, like Australians, are natural wanderers. They love to travel. That includes their sports teams.

In 1924-25, after rugby had been played in England for more than 50 years, a team from New Zealand took a six-week boat trip to Europe. They spent three to four months playing established teams around Great Britain, Ireland and France. They went 32-0.

“I wasn’t around then but I suspect that was somewhat of a turning point where they said, ‘Hey, this is something we’re good at and something we succeeded at,’” he said. “And beating the mother country at home was really significant. It was a team called The Invincibles. It became a little colony in the bottom of the South Pacific actually becoming good. It was something they could do.”

When New Zealand hosted the 2011 World Cup, towns hosting visiting teams got decked out in the country’s colors. The Russian team looked around and saw Kiwis in Cossack hats. Of course, the All Blacks won, sending the entire country into a state of inebriation that continued until they won again four years later.

“We were referred to as ‘a stadium of 4 million people,’” Dixon said.

This was not going to be my first rugby game. During my New Zealand visit, Dixon and I went to the opening weekend of the Super 12, a relatively new pro league of teams in New Zealand, Australia and South Africa. It took some NFL marketing strategies and had cheerleaders, nicknames and “Friday Night Football.” It has since expanded to the Super 18 with a team in Argentina and another in Japan. We saw the woebegone Waikato Chiefs of suburban Albany upset the powerhouse Canterbury Crusaders from Christchurch.

Afterward, I bore witness to what makes rugby special and unique to any sport in the world. I went into the stadium clubhouse where both teams and the teams’ fans shared beers together. They raised toasts. They laughed. The Crusaders gave a stirring tribute to the triumphant Chiefs. I knew this happened in amateur rugby. It’s one of the biggest appeals for burned-out American football players who cross over. But seeing it happen at the pro level, for a grizzled sportswriter souring on the cold, corporate world of American pro sports, was like stadium lights turning on.

As I clinked beer bottles with one Crusader, All Blacks star Justin Marshall, I asked him the question I’ve always wanted to ask a high-level rugby player: Do you think American football players are soft because they wear so much equipment?

“No, we don’t think they’re soft,” he told me. “But what we don’t understand is how you can play only four or five plays and say you played a football game.”

Valid point. The only specialization in rugby is one guy is a designated kicker — but he kicks with a broken nose, scars and a nasty attitude from the hitting he also did the entire game.

We took the standing-room-only bus to Olympic Stadium where we met Mike Gerull, a German All Blacks fan who volunteered on Dixon’s wildlife refuge a few years ago. Mike, wearing an All Blacks stocking cap and carrying an All Blacks banner, flew down from his job in Zurich for the night just to watch the game. It took us nearly as long to enter the stadium as it did to ride to it. The massive crowd looked so foreign after two seasons of sparse soccer crowds for A.S. Roma games. Roma’s ultras have protested the placement of barriers in their Curva Sud for two years and stayed away, reducing the pro soccer game environment in Rome to that of an amateur game in rural Sicily.

There are no ultras in rugby. As we took our seat, we were surrounded by couples, children with parents and Italians wearing the blue scarves of the Italian Rugby Federation. Fans decked in black and white were sprinkled throughout the crowd like salt and pepper.

Anyone can see the appeal. Rugby consists of two 40-minute halves with virtually no stoppage. The ball can be passed backward but not forward and blocking isn’t allowed. Teams move the ball upfield with almost second-sense lateral skills. No one wears pads except for the occasional light head covering that looks as protective as a giant pot holder.

Some of my most heated arguments overseas have been with rugby fans whose testosterone spills over when saying American football equipment debunks their image of toughness. Sorry, mate. You’re wrong. Rugby is a physical game; football is a violent game. The reason American football players wear equipment is if they didn’t, they wouldn’t just have injuries.

Rugby goes horizontal; football goes vertical. Rugby players get gang tackled. They get dragged down from behind. They don’t have defenders get a full head of steam over 20 yards and leap into them like a 220-pound guided missile. No defender gets blindsided by a blocker. During Saturday’s match, I saw two solid hits, tacklers hitting ball carriers straight in the chest. That’s it.


However, the All Blacks’ skill was something out of an instructional video to a novice eye like mine. Three laterals led to their first “try,” or five-point touchdown.” A few minutes later, they had another try from a bearded 6-foot-1, 275-pound Maori named Charlie Faumuina, who looks like he ate Mike Tyson for lunch. By halftime it was 35-3. Italy was down 54-3 when it scored its first try with 13 minutes left. Tommaso Boni scored on a long run after a deflection. Olympic Stadium erupted as if Italy took the lead. The All Blacks won, 68-10.

Keep in mind, seven of the All Blacks best players retired after last year’s World Cup win and they started only six regulars. Beauden Barrett, just this week announced as World Player of the Year, never left the bench.

Italy played its regular lineup. But then this is a country where rugby didn’t get established until the 1970s. Today its national league, Eccellenza, doesn’t draw any better than baseball. Flaminio Stadium, built in 1960 for the Olympics and used as Rome’s rugby stadium until 2011, has fallen apart more than the Roman Forum.

Two teams, Benetton Treviso of Treviso and Zebre Rugby of Parma, play in the Guinness Pro12 league with teams in the UK and Ireland. They’re 11th and 12th in the 12-team league. But the Italian national team has a new Irish coach in Conor O’Shea, who won the English championship in 2012 and a few fans in Italy with comments like last week’s, “Learning Italian is harder than playing the All Blacks.” 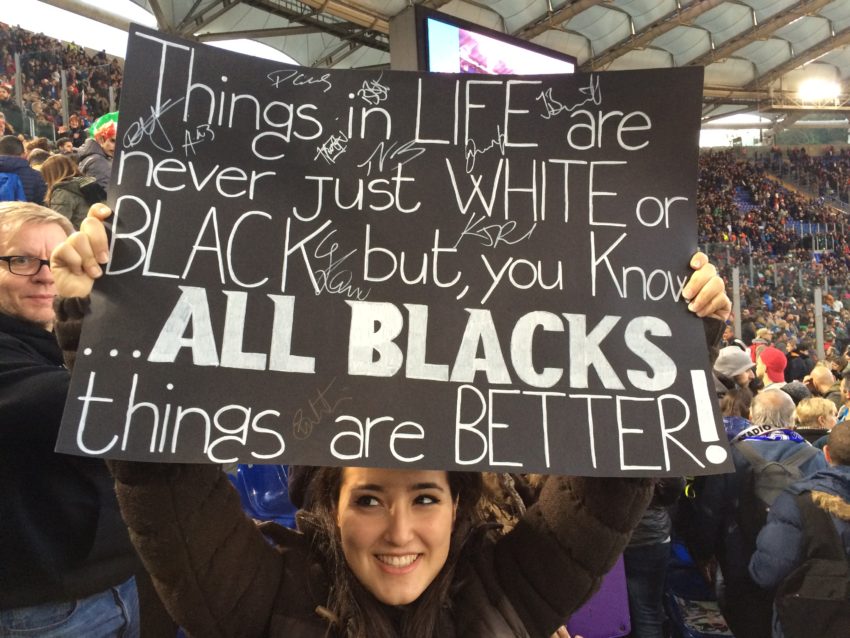 “The All Blacks are bigger, faster, but in New Zealand rugby is a religion,” said Castellani who covered the game. “Here people like it but also Italy always sells out because it’s a fashion. It’s very trendy to see an Italian rugby game.”

Who knows? Maybe Italian designers will bring back 1970s rugby shirts. Priests will some day lateral rugby balls around the Vatican lawn, the inspirational cries of the Haka spilling out over St. Peter’s Square.