Italy off the beaten path 2019: Day trips from Rome and an Amalfi jewel


I never make New Year’s resolutions. Why make one on Jan. 1 when you can make it on July 1? Or March 15? You’re going to wait until the new year to stop drinking boxed wine? It’s a cop out.

If you’re going to resolve to do something in 2019, do this: Travel to Italy. Yeah, my adopted country is starting to lean right. The guy running the country has a Donald Trump bobblehead doll on his Fiat’s dashboard. But deputy prime minister Matteo Salvini has no effect on Italy’s great beaches, delicious food or priceless museums.

What will have a lasting effect in Italy is where you go. Fifty million tourists come to Italy every year. Those of you who have done the American tourist triangle of Venice-Florence-Rome should look farther afield. Find a unique, truly Italian experience that is away from the mass hordes you saw the first time around yet has much of the beauty you crave when you come here.

This is where I come in.

I’ve been to 18 of Italy’s 21 regions (missing only Calabria, Molise and Valle d’Aosta) and they all have little towns full of charm and medium-sized cities viewed only as a place to go somewhere else. My girlfriend, the able-bodied photographer, Marina Pascucci, and I stumbled onto a few more places this year.

So when you pull out your 2019 calendar and plan your vacation, add my annual Italy Off-the-Beaten-Path to last year’s inaugural list . Clip it and press it on your refrigerator with a Chianti bottle fridge magnet. It’ll remind you to stop buying wine in hardware stores.

Heretofore are 10 places you likely have never heard of and can add to your next itinerary, in alphabetical order. (Caveat: Do NOT come in July or August, unless otherwise noted. It is stifling hot and the height of tourist season everywhere):

Bolsena (pop. 4,000): Italy has some famous lakes — Como, Guarda, Albano — and Lago di Bolsena often gets overlooked. So does its town. Located about 80 miles north of Rome, Bolsena makes for a memorable day trip from the city’s chaos. The 44-square-mile lake is one of the largest volcanic lakes in Europe and is a fabulous place to swim and sunbathe. The town is oh, so charming. It’s situated on a hill where narrow, cobblestone alleys lead up to a medieval center and the 13th century Castello Rocca Monaldeschi. Have a Prosecco in Piazza Matteotti and poke your head in shops specializing in local foods. 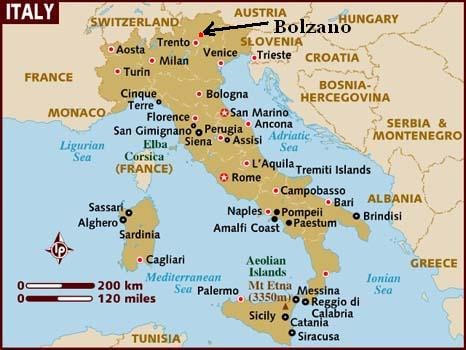 Bolzano (pop. 107,000): It’s the gateway to the Dolomites. Many come here as a base for their trekking, camping and skiing but stick around town for a couple of days. Few places in Italy are like it. It’s only 20 miles from the Austrian border and consequently is bilingual. You’re just as likely to hear “Guten tag!” as “Buongiorno!” Consequently, it has a German touch. Tyrolean buildings, some looking like Disneyland castles, share space with pastel-colored buildings on narrow cobblestone streets. Throughout history it bounced from Bavarian rule to Austrian to Napoleon back to Austrian then finally Italian in 1918. It’s only 30 minutes to great hiking and close to 29 ski resorts. Bolzano is a good place to stay cool in July and August. Be sure to dine at Hopfen & Co., for local cuisine such as the leg of pork and the best sauerkraut you’ll ever have.

Cesanatico (pop. 26,000). It’s a quiet respite from the crazy cheek-to-cheek beach in Rimini 30 miles to the south. Cesanatico feels like Venice with its long canal, bridges and marine museum but is a quiet Adriatic port town. Lots of hotel accommodations to provide for the excellent beach that is pleasant and comfortable except for the two crazy summer months. Have a glass of wine on pink antique couches in the kitschy cafe called La Saraghina Ubrica then fine dine at Ca’ Nostra (“Our house” in the Emilian dialect) where you try Emilia-Romagna’s scrumptious antipasti. But don’t miss the region’s signature sauce, ragu, on strozzapreti, the short, twisty pasta named for the shape of rope that can strangle priests.

Frascati (pop. 22,000). Like picnics? There are few better places to have one than here. It’s only 12 miles southeast of Rome in the Alban Hills. Here is where they make the famed Frascati white wine, a fresh, light wine perfect for picnics, especially with the porchetta (sizzling, suckling pig) sandwiches they serve in the small main piazza. Frascati is famous for its 16th century villas. Popes, rich cardinals and Roman aristocracy built them and they remain today. You can’t miss Villa Aldobrandini, a hulking structure with beautiful Baroque gardens open to the public. Take a picnic and a bottle of wine and walk up the hill to the statue park and dine amongst the marble gods, or find a spot in the grassy park near Aldobrandini. For history buffs, Frascati was Germany’s Mediterranean headquarters until 1943 when Allied forces bombed half the buildings, killing 1,000 Italians and 150 Germans. 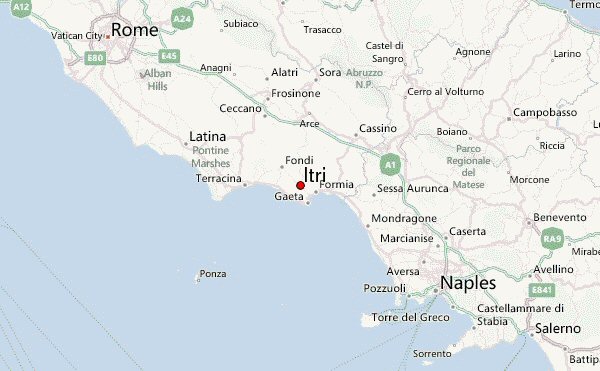 Itri (pop. 11,000). Marina and I discovered this little town while we stayed in the beautiful Casa Cerqua Landi B&B, complete with swimming pool, in the hills above Sperlonga, maybe the best beach in Lazio. Itri is an ideal place to stay for an Italian beach vacation. It’s only eight miles inland from the Tyrrhenian Sea and 90 miles south of Rome. It is real Old Italy where the elderly gossip in the quiet town piazza and the gelateria is the town social center. Located on the old Appian Way, Ancient Rome’s road to the sea, it is famous for its Gaeta olives, which have their own festival the first Sunday of every August, and its sauteed wild game like boar, rabbit and pheasant. Even in July it was void of tourists. And it’s cheap. The two best Neapolitan-style pizzas we’ve ever had, a beer and a glass of wine were only 20 euros at La Tavernetta. 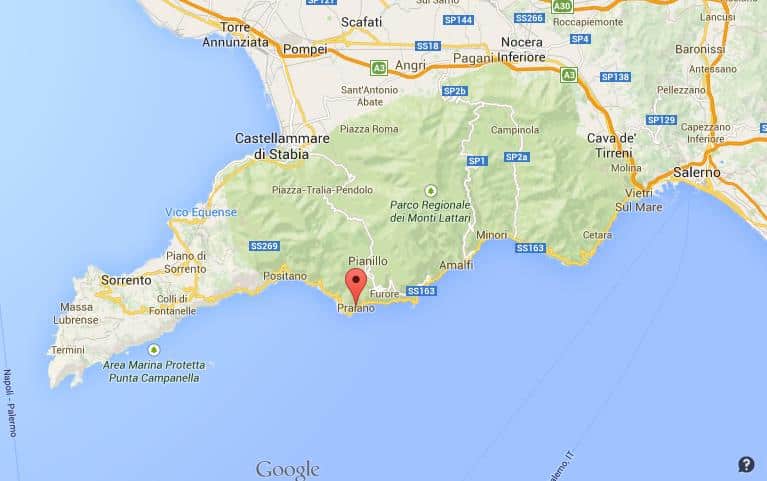 Praiano (pop. 2,000). The Amalfi Coast is a magnet for romantics and those visiting Italy for the second time. If you want to avoid the crowds in the towns of Positano and Amalfi, try this little village in between. Praiano sits atop a rocky cliff with spectacular views of the royal blue Tyrrhenian below. I had a beautiful AirBnB overlooking the sea with just a short hike up to the village. The excellent SITA Sud bus system runs regularly, connecting Praiano with the other coastal towns. If you’re adventurous, you can hike the seven-mile trail named appropriately Santiero degli Dei (Path of the Gods). It begins in Praiano and goes along the Lattari mountains with gorgeous views of the ocean. It’s about three to four hours to Positano. But stay in Praiano and get some local cheese, bread and wine, sit in the piazza and look at the fantastic sunsets every day. For a dining option away from the crowds of Positano, try Trattoria San Gennaio and have the tagliatelle with clams.

Radda in Chianti (pop. 1,600). If you come to Italy for wine, particularly Chianti, Radda is the perfect base. It’s the capital of Tuscany’s Chianti country. Located nine miles north of Siena and 22 southeast of Florence, it’s a medieval walled city and nearby about two dozen wineries. Its cobblestone alleys make for the perfect stroll and it’s not big enough to attract crowds. Get a winery map and take off. If you only have time for one, I suggest Castello di Volpaia, voted No. 3 on Wine Spectator’s Top 100 list for 2018. One caveat to Radda in Chianti: You’ll need a car. Rent one in Florence.

Santa Margherita (pop. 10,000). Go ahead and join the parade of moving flesh hiking along the Cinque Terre. Stay here. Santa Margherita is a quiet fishing village turned retirement town just 40 miles along the coast north of Monterosso, the most northern of the five Cinque Terre towns. Santa Margherita is right out of a Italian fairy tale: 18th century lanterns illuminating palm trees lining a beautiful promenade along the harbor where million-dollar yachts dock. I stayed at the Hotel Continental, overlooking a swimming pool and a private beach on the Gulf of Genoa. Eat at Da Michele, the best seafood place in town, and try the fresh grilled orata. Everything is about two-thirds the price of stuffy Portofino, three miles to the south.

Spello (pop. 8,500). This medieval walled city is in Umbria which is the only one of 21 Italian regions that does not border a sea or another country. Umbria may have fewer outside influences than any other region and Spello is in the heart of Umbria. Inside its three huge gates is a city made of stone with overflowing flower baskets lining narrow alleys and small piazzas. It features the Chiesa Santa Maria Maggiore, a 12th century confection of white architectural splendor, and the 13th century town hall. Stop by La Bottega di Teresa where Teresa sells some of the best olive oil in Italy and local honeys, cheeses and salamis. Spello is the perfect off-the-beaten-path town to stay in while visiting St. Francis’ old home in Assisi seven miles to the north. 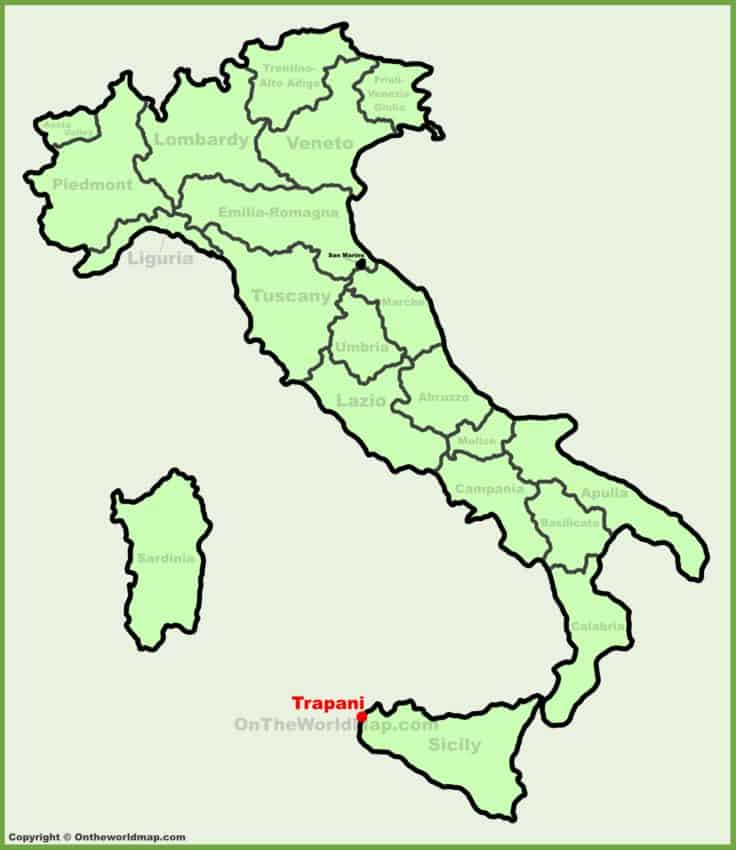 Trapani (pop. 70,000). The Sicilian island of Favignana is one of our favorite weekend getaways. We don’t fight the necessity of spending our last night in Trapani to catch the 70-minute early morning flight back to Rome. Located on the far western tip of Sicily 65 miles west of Palermo, Trapani is best known as the gateway to the Egadi Islands (Favignana, Levanzo, Marettimo). We like Trapani for its wide walking mall in its town center, excellent Sicilian cuisine (our favorite cuisine in Italy) and the long promenades on the water. Despite its relatively large population, Trapani remains more of a fishing port than a tourist destination except on Good Friday when it hosts the longest religious festival in Italy. It’s an all-day affair consisting of 20 floats depicting scenes from Jesus’ final days. It has played in Trapani every Good Friday since 1612.