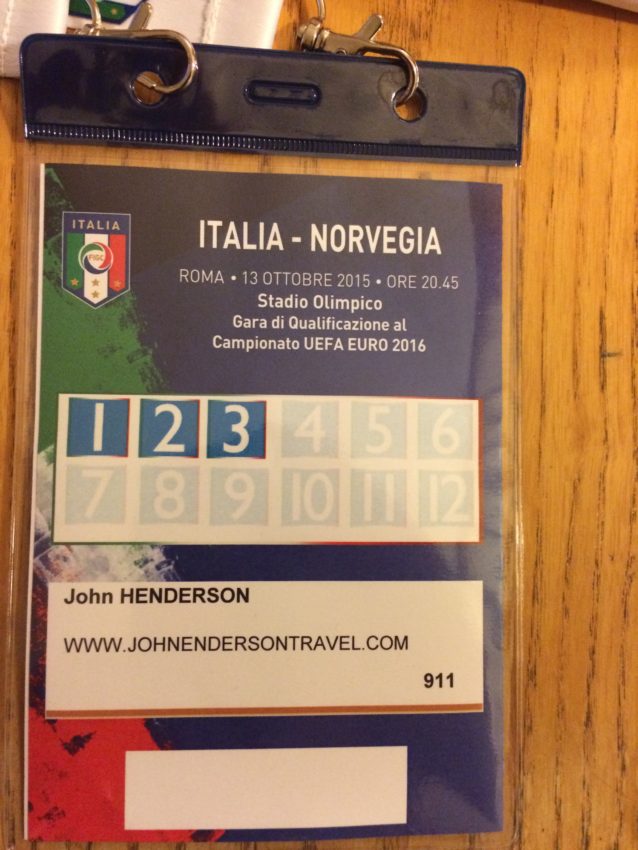 Soccer has an element that I found in no other sport growing up as a sportswriter in America. It has nationalism. The good kind. Not the kind that sparks wars but, instead, flags, face paint and Napoleon costumes in the stands. An entire country shuts down to watch its team represent it on a world or continental stage. Basketball in America? No. The U.S. team is so good it’s boring. The American soccer team? Not really. World Cup ratings were high but half of America calls it “kickball.” Soccer in the rest of the world galvanizes entire countries.

I hate to sound pollyannaish, but international soccer also helps bring the world closer. In 40 years as a sportswriter, the greatest single event I covered was the 2006 World Cup in Germany. Thirty-two nations gathered in peace and sport. Never have I seen my fellow man reach out to each other as I did then. My one Kodak moment was walking past a bar in Munich and seeing a German fan in lederhosen drinking a beer with a Mexican fan in a sombrero. I walked to the stadium surrounded by Iranian fans who talked soccer instead of politics. Even the English fans, their hooligans prevented from coming, were polite.

So I jumped at the opportunity Tuesday night to attend a game that didn’t record a blip on the American sports radar. Norway was in Rome to play Italy in the last game of qualifying for next year’s European Championships in France. Italy already clinched qualification but needed to win to finish in its group and earn a better seed in the Dec. 12 draw. Norway, in second place, was only one point ahead of Croatia for the second and last automatic qualifying spot. Croatia visited last-place Malta.

Italy’s national team has always carried an interesting cache in Italy. Italians follow it, but Italy is different than any other country. Despite roots dating back nearly 3,000 years, regardless of the eternal imprint the Roman Empire left on the world, Italy has only been a republic since 1861. That’s nearly 100 years after the United States. Before 1861, Italy was a peninsula filled with city states that were as suspicious and hateful of their neighbors as some today in the Persian Gulf. Major militaries formed in Venice, Lombardy and Genoa. Sicily and Sardinia were infiltrated by so many foreign armies they were almost separate countries. Countless invasions of Rome dropped the city population in the 14th century to about 20,000. The whole city was a training camp for vandals. Payback is a bitch, Romans.

It’s the 21st century, and Italy remains as regionalized as any country in the world. All 20 regions have their own dialect, their own history, their own cuisine. They also have their own soccer club. If a country rallies around its national soccer team, Italy’s regions rally around its soccer club. It takes precedence. Always. I listen to Rete Sport on 105.6 FM. It’s a radio station that is devoted all day to A.S. Roma. That’s it. No other team. No other sport. For 23 years I lived in Denver where domestic violence rises on days when the Denver Broncos NFL team doesn’t win. They don’t have media coverage like this.

I asked Manuele, who works in my gym and is a member of A.S. Roma’s notorious Curva Sud crowd of ultras, if most Romans would rather win the Serie A, or national title, than the World Cup. “Serie A,” he said. “No question, 100 percent. If Roma wins it this year, you’ll see a party like you’ve never seen.”

It’s true. I covered Italy’s shootout win over France for the 2006 World Cup title. Italians filled public squares watching it on big screens. They partied all night. As dawn broke in Berlin, I saw Italians still weaving through the streets waving their green, white and red flags. But when A.S. Roma won Serie A in 2001, Romans partied for a week. Every night they filled Piazza Santa Maria Liberatrice around the corner from my apartment and not far from where the club formed in 1927. I firmly believe Italy’s negative birth rate received a major spike nine months after that night in 2001.

As Sir Winston Churchill once said, “Italians lose wars as if they were football matches, and football matches as if they were wars.” I noticed the difference as I made the absurd two-mile walk from credential pickup on one side of Olympic Stadium, all the way down the street and around a corner and down another entry road to the media entrance. This blog has no pictures because I saw no Italian fans dressed like gladiators, Julius Caesar or gondoliers. I did see female fans dressed like runway models but those are just your average Roman girls. If you’re not wearing red and yellow to a Roma game or carrying red and yellow, you may as well be naked.

Still, the crowd was good — in more ways than one. Think about it. Norway vs. Italy in Rome. Could any stadium in the world have better-looking women in it than Olympic Stadium that night? About 30,000 fans filled both sides of the Olympic Stadium but Curva Nord and Curva Sud were curiously closed off. It didn’t seem like a competition without the ultras spewing smoke bombs and filthy songs and displaying banners even worse. The crowd didn’t even roar that much after Italy’s curiously worded national anthem, “Il Canto degli Italiani.” Written in 1847 by a 20-year-old named Goffredo Mameli, the anthem actually points to the nation’s faults while illustrating what makes the Italian soccer team’s fan base so strange. The anthem actually contains the following stanza:

What other country’s anthem rips itself for a lack of unity? You can see it in the Italian national fan base but that hardly affects the quality of play. Despite Italy already clinching its spot for 2016, its superior talent against Norway’s sense of maddening urgency provided one of the best soccer matches I’ve ever seen. Norway has been to one European Championships in the competition’s 55-year history. When the Ghanian-born Norwegian club-veteran, Alexander Tettey, volleyed in a deflected free kick from outside the 18-meter box, the 1,000 Norwegian fans wedged into a corner section went berserk. So did Norway’s team which came out of halftime and rallied around inspirational captain Per Ciljan Skjelbred spirited, wide-eyed pep talk.

Italy then woke up the subdued Italian crowd. Orjan Nyland, Norway’s incredible goalkeeper, made three magnificent saves before A.S. Roma’s own Alessandro Florenzi snuck in behind a defender, who mishandled a free kick, to scoot it into the net in the 77th minute. Nine minutes later, Graziano Pelle, Italy’s most dangerous striker, took a beautiful cross from Florenzi and knocked it past a helpless Nyland for the eventual game-winner.

This Italian team has so many unknowns. Five of the starters weren’t on last year’s World Cup roster, three current players are about my age and it still follows Italy’s often cautious, overly defensive pattern that has knocked them out of the last two World Cups in the group stage. Italy’s 16 goals in 10 qualifying games tied Northern Ireland with the second fewest of the nine group champions. And how does a team with such a defensive emphasis screw up a free kick as it did on Norway’s first goal?

But Italy also has a remarkably successful coach in Antonio Conte who took over after the World Cup and has only lost one match in 14: a friendly against Portugal. Word around Rome is A.S. Roma’s brass would like to hire him. If third-year coach Rudy Garcia doesn’t jump Roma from its current fourth place, in a season when four-time defending champ Juventus is way down, Conte may have that option. The Italian media even asked him about it. He said, “Rome is a stupendous city that I’ve learned to appreciate coming here for work but the Roma fans and the club must be calm. Garcia is a great coach. I respect him a lot.”

I walked out of the stadium past a squadron of bored Carabinieri, Italy’s national police. The Italian fans were as well behaved as if they walked out of St. Peter’s. I stood in a packed bus back to my neighborhood. I think I saw two fans wearing Italy’s colors. France 2016 starts in June and I don’t expect the buildup to be much more than what I experienced last night.

But if Roma wins Serie A in May, I am not leaving Piazza Santa Maria Liberatrice for a week.