As a jogging town, Rome is like Riyadh for clubbing and Des Moines for surfing. It doesn’t compute. Rome was designed more than 2,000 years ago for horse-drawn carriages and outdoor markets. I think the only jogging occurred when the Tiber flooded.

Today the banks are fortified but the city layout hasn’t changed much. Joggers are as foreign on the street as Monster trucks. Rome has very underrated parks. Villa Borghese and Villa Ada in the north and Doria Pamphilj in the west have jogging paths and joggers and a jogging culture. But the streets of Rome are harder to negotiate than North Korean air space. The city gets 10-12 million tourists a year, sidewalks are narrow and cracked, drivers aren’t used to you and dogs are always leaving little gifts.

In my first stint in Rome, I jogged with the Hash House Harriers (A Drinking Club with a Running Problem) and my Nikes and Asics have covered most of this city. There is a skill in pinwheeling around Romans with multiple shopping bags and dodging Vespas. But it’s not exactly a run through Central Park. However, the one great feature of jogging in Rome is you can run past some amazing history.

I did just that this morning.

I live about three-quarters of a mile south of one of the three largest sports stadium ever created. It was where wild horses tore passed more than 150,000 spectators, carrying brave Roman men hanging on for their dear lives. It was where bodies were dragged off the track after getting horribly disfigured and where some of the biggest religious festivals in the Roman Empire were held. 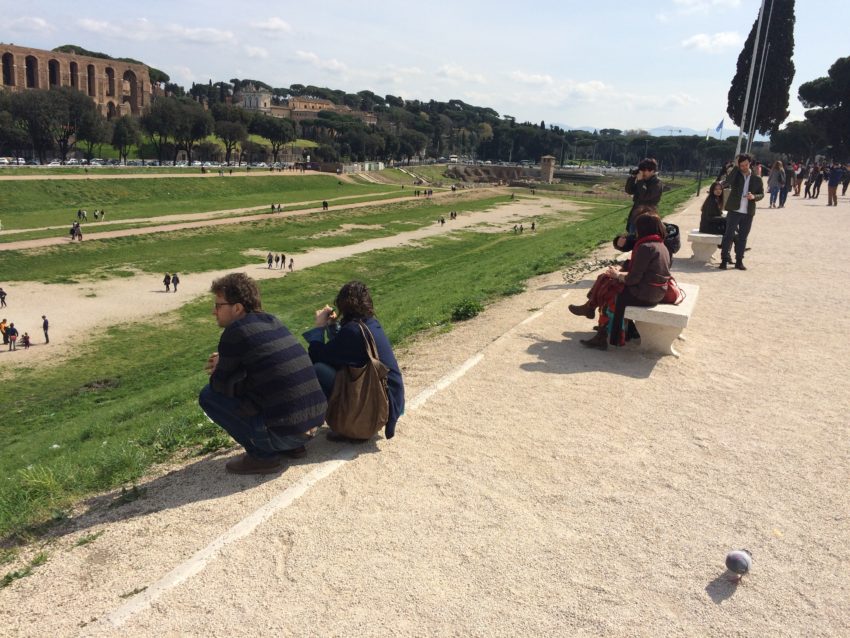 Circo Massimo (Circus Maximus in Latin) is still around. It was built in the 5th century B.C. to entertain the mob, Rome’s blood-thirsty masses, with wild chariot races tied to festivals called ludi. They ranged from half-day parties to week-long celebrations that included everything from feasts to beast hunts. The stadium held more than 150,000 people. I won’t believe some claims of 250,000. That was a quarter of Rome’s population. I find it hard to believe one of every four people in Rome would go to a sports event. Rome wasn’t Lincoln, Neb.

Today Circo Massimo is a public park. Its fascinating history known the world over makes up over for its crude appearance. Sitting between Aventino and Palatino, two of the Seven Hills of Rome, Circo Massimo today looks like an 800-meter-long grassy pit. It sits between the busy streets of Via Circo Massimo and Via dei Cerchi and looms below the Food & Agricultural Organization (FAO), the United Nations aid outfit that seems to employ every expat in Rome but me. The track where the chariots would have raced is now a mix of gravel and dirt. The massive grandstands are small grass-covered hills.

The bus that stops in front of my apartment building took only two stops before it stopped in front of Rome’s worst tourist trap: La Bocca della Verita. It’s the ancient piece of round marble with two eyes and a hole in the middle forming a mouth and an exasperated expression. Legend has it, you stick your hand in its mouth and if you tell a lie, it bites your hand off. Tourists stand in line for hours to get an inane photo of their arm in a ruin and video proof of men telling their wives, “I won’t shtoink your best friend.” Modern man must be very loyal. No man has lost an arm yet.

When I arrive the line is out the entrance and creeping toward the staircase of a neighboring hotel. Then I remember. This is the Sunday before Easter. Rome is crawling with pilgrims. I didn’t know. How fitting that I’m headed toward Circo Massimo. I would have fit in real well in pagan Rome.


I turn the corner and up one block and there it was. On a perfect, sunny 60-degree day, I stand in the shade of some towering, majestic Mediterranean pine trees and try imagining this scene 2,300 years ago. Where I’m standing would be an end zone seat for the chariot races. I’d have a pretty good look at the seemingly impossible hairpin turns. I’d see the resident dictator and his family seats in the southeast corner, prime viewing to watch the speed and the crashes and the deaths. A canal separated the track’s perimeter from the stands to protect fans and help drain the track.

Smack dab in the middle, as part of a long dividing barrier, stood the 80-foot-high Obelisco Flaminio, placed there in the 1st century A.D. by Augustus, Rome’s first emperor. It came from Heliopolis, Egypt, and represented Rome’s victory over Egypt and the new province. Today, the obelisk stands in Piazza del Popolo and instead of overlooking chariot races it overlooks hack street musicians.

Built in the 5th century B.C., Circo Massimo was used for chariot races until 549 A.D. That’s more than 900 years. And the Washington Redskins need another new stadium after only 20? Circo Massimo measured more than 2,000 feet in length and nearly 400 feet wide. Julius Caesar, not the last politician to be into horse racing, extended the seating all the way around the track. It was a colossal complex, a historical achievement in design and civic achievement. Before the Colosseum was built a few hundred yards to the east, Circo Massimo was Rome’s main source of entertainment.

On this day, it is my source of exercise.

I look around and see no other joggers. I see men and women in all shapes and sizes wearing sunglasses and carrying maps and cameras. I see groupings of Japanese snapping selfies. I see teenage girls gossiping in the grass. I take off running under the pine trees and up Via Circo Massimo. It’s a slight incline, just enough to get a much better view of the grounds below.

And what a great view for a chariot race.

In Ancient Rome, chariot races were wild and violent and fast. Very, very fast. At one time, 25 four-horse chariots would bang around the track but the number eventually dropped to 12. I can’t find a whole lot of rules. Banging was not only legal but expected. If a charioteer happened to lose his grip and fall off the back, other riders were under no obligation to do anything but trample his body into prosciutto and keep going. A race usually consisted of seven laps and the charioteers who survived and weren’t quadriplegics were considered the rock stars of their day.


I would settle for negotiating one lap without decking a German. I descend on the other side of Via di Circo Massimo and make the far turn around some major construction. They’re renovating one tower and a series of storage areas that would’ve been under the original stands.

I cut up Via dei Cerchi past a graffiti-covered wooden fence and dodge an estimated 547 tourists. I run by only one jogger. Surprisingly refreshed after one lap I take another one. I learn which rocks to avoid and when to drop down into the infield dirt where chariots once tread but weren’t nearly as menacing as some of the tour groups. I return to my starting spot under the pine trees and look at the clock on my cell phone. Even stopping to read renovation signs and take notes, photos and some real bad selfies, I did the two laps in 31 minutes. Looking at my Health app, I ran about two miles.

Circo Massimo seems larger. In history, it was. Now it will be the site of a Bruce Springsteen concert July 16. Yes, even today Circo Massimo is the home of rock stars.