London markets a very English way to spend an afternoon


LONDON — I’m one of those strange guys who likes to shop. Clothes shop. Souvenir shop. Window shop. It’s a big reason I love traveling. Traveling is all about exploring and expanding and there is no better way to explore a foreign culture than public markets, particularly after you see the larcenous prices in the stores. I’ve tasted Szechuan beef in a food market in Singapore, bought oranges in a fruit market in Belize, found a $4 watch I still wear from a flea market in the South of France, a painting in an art market in Rio de Janeiro. I could go on. Every place I go I find a public market. They’re also great photography — if you don’t mind buying a sketchy banana for the sole purpose of photographing the farmer with the funny hat.

Rome has great public markets but only for food. Its one public market for items not edible, Porta Portese, is directly across the Tiber River from my apartment. It is two parallel streets about a mile long. They are lined with everything from cheap clothes to electronics to backpacks. They used to be lined with gypsies whose fast hands helped make Porta Portese one of the most dangerous places in Europe and Rome one of the pickpocket capitals of the world. (It’s currently No. 2, behind Barcelona.) An increased police presence has scattered the gypsies back to their filthy river banks yet I still leave my wallet home when I venture over to just buy a towel. Today nearly all the stalls are run by Bangladeshis. They are the hardest-working ethnic group in Rome, but I feel more like I did visiting India in March than being in the heart of Italy.

If you want a clear window into the lives of a people — as well as buy a candlestick holder from the 19th century — come to London. London is the public market capital of the world. It lists 73, covering nearly every neighborhood in a city the size of Rhode Island. From Bromley to Enfield, London has something for everyone, from old Beatles records to umbrellas, from silver earrings to top hats.

I came to England on a recent assignment and spent one day prowling public markets. Shopping is free. Buying is expensive. The sticker shock traveling around London is something akin to the electric chair in the Texas state pen. London is crazy expensive. One ride on the subway, The Tube, is 4.90 pounds. That’s $7. One ride on Rome’s Metro is 1.50 euro or $1.62. A cappuccino in a neighborhood coffee shop is 2.50 ($3.55). Mine is Rome is $1.20. An average one-bedroom apartment in North London rents for about $1,700 a month.


London’s markets aren’t giving away anything, either. In Porta Portese, I can outfit my kitchen, buy a new wardrobe and the hubcaps of a ‘69 Ferrari and have enough left over for a pizza. In London, you’d better pack a lunch. However, the markets don’t sell much junk. I started my tour at Portobello Road Market. It’s located in Notting Hill, an affluent area in West London, more noted for the movie of the same name about an owner of a Notting Hill travel bookshop (Hugh Grant) courting a Hollywood superstar (Julia Roberts). Walking around Notting Hill on an overcast day in the 50s, I could picture Roberts living here and not just acting. Notting Hill is noted for its beautifully terraced lawns and Victorian townhouses. George Orwell lived in Notting Hill and Prime minister David Cameron was once based here. But since it was developed in 1820, Notting Hill has been open to artists and alternative cultures. Grant owning a shop filled with Lonely Planets and Bill Bryson travelogues would fit seamlessly today.

So does a public market. 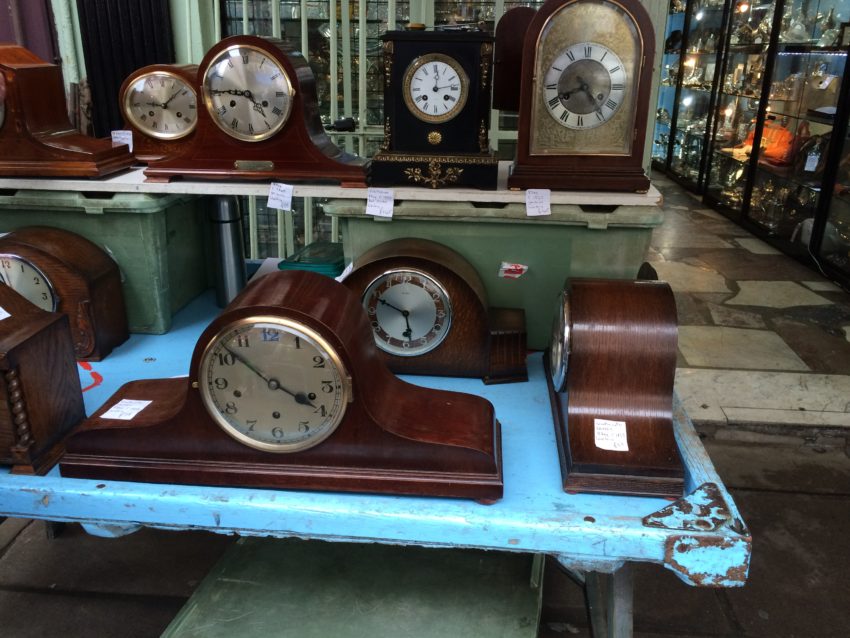 The market stretches along Portobello Road the entire two-mile length of Notting Hill. On a Sunday, I felt the mass of mankind just a few blocks from the Notting Hill Tube station. London’s public markets have various emphases. Portobello’s is antiques. I squeezed through the crowd and saw on both sides of the road stalls selling silver chains of every length with every conceivable pendant. One stall was filled with old English tea boxes. Another had what every English home seems to have: antique clocks. I spotted one from 1933. It was 55 pounds ($78). Numerous stalls sold antique maps of Europe dating as far back as the Middle Ages. Italy’s boot shape looked more like a Birkenstock. One shop sold maps from 95-210 pounds ($135-$300). 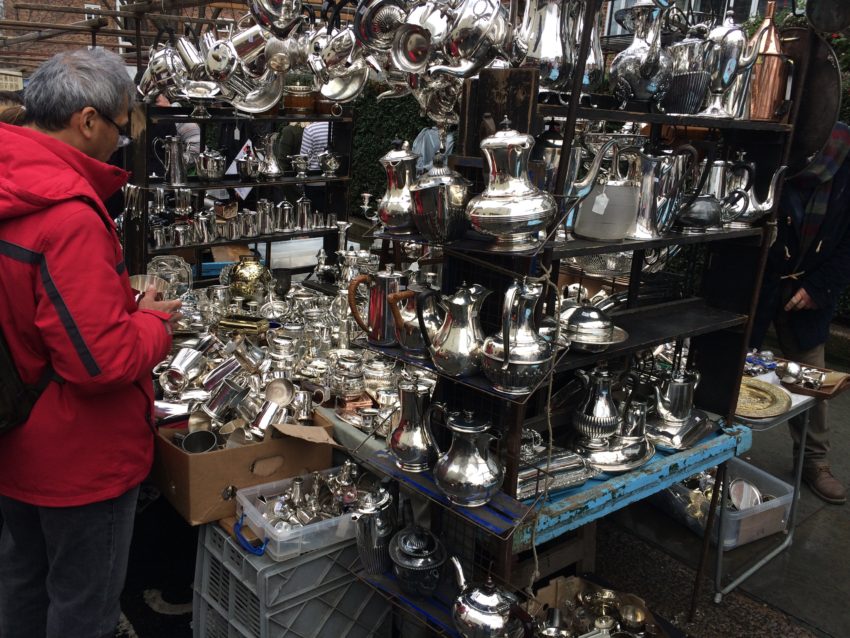 I heard a map salesman speaking Italian and introduced myself. He was from Abruzzo, the region just east of Rome’s Lazio, and had been living in London 20 years. He loves it. He loves the hustle, the people and, especially, the business. I told him he left Italy at the right time. The economy has gone the way of the Roman Empire.

“They always say that,” he said. “But I go back and Thursdays, Fridays and Saturdays, the restaurants are still full.” 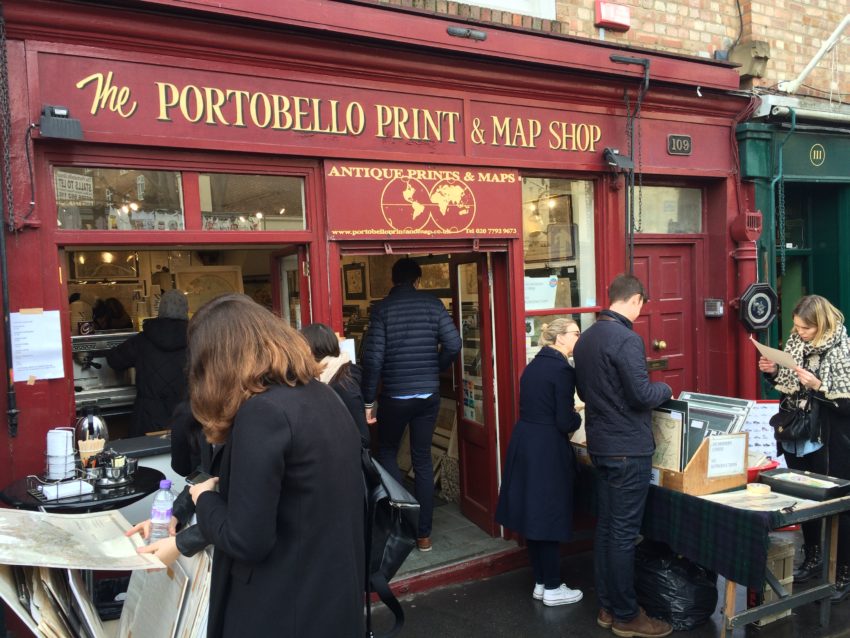 And so are London’s markets. Somebody has money to spend in this town. I heard American English, German, Spanish, French and indecipherable Eastern European tongues. I saw women in burkas, men in turbans, hippies in long hair. I felt right at home. I walked past a CD stall with Ella Fitzgerald blasting from a loudspeaker. A woman in the street in front of the Duke of Wellington restaurant played love songs on an electric keyboard.

Then I hit the food section. It stretched two blocks. Never eat breakfast before going to a public market. Regardless of where, the food is interesting if sometimes a bit frightening. I saw a giant vat of paella Valencia filled with a pale orange mix of chicken, garlic, clams, peas, runner beans, tomatoes, butter beans, paprika, rosemary and saffron. As the worker stirred it with a metal spoon the size of a plunger, I thought someone’s hand might surface.


After a disgustingly delicious chocolate-frosted donut with chocolate sprinkles, I was on the hunt for a present, something very English. I wanted something so English I needed to present it on a silver tray. I found very little I could afford. Who needed a circa 1935 soccer ball? But then I came across a stall with dozens of silver pins with colorful decorative heads. They looked like torture instruments for fingernails from the Vietnam War. I asked the nice woman and she said they are hatpins. You unhook the head, insert the pin in the hat and then clasp the head on the end of the pin.

“But no one wears bonnets,” I said.

“Oh, but you can tie scarves or just put them on the lapel of a blouse,” she said.

“I’ve never seen one in Rome.”

“Oh, many Italians buy them here,” she said.

She may have lied but she sold me one with a pink head she claimed was from 1900. I didn’t care if it was made last Tuesday. It wasn’t very expensive and as English as afternoon tea at Hyde Park.

I made two quick passes through two more markets.


Covent Garden Market on the west end is a colossal tourist trap built inside a giant, gray iron, open-air shelter that looks like a Zeppelin hangar. It’s filled with every London and United Kingdom souvenir imaginable as well as the usual stock of overpriced costume jewelry and clothes. As I quickly passed through, I saw a magician passing around his top hat to a huge gathering who had just watched his show. Established in 1654 as a simple vegetable market, Covent Garden Market is now more of a high-end mall. I passed Il Papiro, an expensive Italian stationery company; L’Occitane, the French body fragrance outfit; and Burberry, the English clothes store.

But, like many public markets do, one grabbed me. I walked by an English perfume store called Miller Harris. I’d never heard of it but after I swallowed hard at the prices, the clerk showed me a box of eight samples for 24 pounds ($34). If the recipient finds one she likes, she can return and buy a bottle of it with a 24-pound discount. English perfume … who knew it would be one of the best bargains in town?

I ended the afternoon at Old Spitalfields Market in the heart of London, just five minutes walk from Liverpool Street Station. It has been around forever, depicted by its saying, “Modern since 1887.” From an upstairs dining area, I looked down at a maze of iron rods holding up makeshift roofs of small booths selling everything from dresses to oil paintings. It’s also where I had a pretty passable salmon and cheese sandwich at the Pulled Pork House, one of the food carts they hauled inside.

The most interesting aspect of visiting Old Spitalfields Market is going across the street for a beer in one of the most famous pubs in London history. The Ten Bells pub is where Jack the Ripper met and later filleted two prostitutes during his reign of terror from 1888-91. Established as The Ten Bells since the 18th century, it was called The Jack the Ripper from 1976-88. Then Reclaim the Night, an organization against sexual violence, told the governing brewery that no public house should honor anyone who once littered these streets with prostitutes’ entrails. The name returned but the good English beer has stayed the same.

It wasn’t a cheap day but it was cheaper than riding the subway all day. And it was very English day. I pondered that later as I sipped my cup of tea at Hyde Park.