Love Italian style: Positano is the Sirens’ call to celebrate an anniversary


“Italy and the spring and first love all together should suffice to make the gloomiest person happy.” — Bertrand Russell

POSITANO, Italy — Bertrand Russell was a turn-of-the-century British philosopher who protested every war from World War I to Vietnam. Even before the first march on Washington he was screaming, “MAKE LOVE, NOT WAR!”

He may have first uttered those words where I’m standing right now.


I’m on the balcony of our hotel room in a corner of the most romantic country on earth. The memories of sleeping on the deck of a sailboat with torches lining the sand in French Polynesia still gets my locomotive libido racing. So does a moonlight cruise of the Seine River in Paris.

But so many places in Italy grab your heart and stick it right in your thorax. You can’t swallow. You can’t talk. You can’t think. What do you do when reality surpasses your dreams? Never had I dreamed of the scene in front of me.

I’m standing behind a small table for two on our balcony. Below us is a turquoise swimming pool and beyond is a forest of trees leading down a steep cliff to the cobalt blue Tyrrhenian Sea below. The sun is setting behind the cliff to our right, bathing the sea in a soft orange glow. A bottle of Falanghina white wine is chilling in the mini bar next to a plastic tub of goat cheese and lean prosciutto.

A year ago Friday I had my first date with my drop-dead gorgeous and talented girlfriend, the photographer Marina Pascucci. I needed to find a suitable place to celebrate our one-year anniversary. Neither of us ever married. We find anniversaries in first dates, however innocent, such as an aperitivo in a Rome bar named for a mosquito: Zanzara.

Besides, any woman who puts up with me for a year deserves a weekend on the Amalfi Coast.

Two years ago I wrote about visiting the Amalfi but this time I chose a hotel on the Amalfi’s center stage. Positano is to the Amalfi what Bora Bora is to the South Pacific, Everest is to the Himalayas, the Spider is to the Fiat. The town of 3,900 hangs from a cliff on the bottom of the Sorrento Peninsula. Every hotel and restaurant has terraces or balconies overlooking the sea. Alleys wind their way up from the black sand beach, around the tile-domed Chiesa di Santa Maria Assunta and up high toward the narrow, curvy road that connects the other Amalfi towns.


From Rome, reaching Positano requires three things: two connections and a thirst for romance. We took a high-speed train that reached Naples in about 70 minutes. We went downstairs in Naples’ teeming train station and took the regional Circumvesuviana train for another 70 minutes to Sorrento then a bus 50 minutes on the windiest road in Italy to Positano.

The Royal Positano Hotel is a couple of curves down from the main road spread out along the cliff. The hotel restaurant has tables on a vast terrace overlooking the sea. In July and August Positano looks like a 1950 photo of the Jersey Shore. In May it has the pleasant, warm vibe of couples connecting to Italy with their hearts — except, of course, on this May day when a rainstorm is forecast to nearly wash away the town the next morning.

But on Saturday, Positano could only have been better if the sea was at its summertime temperature. We made the long walk down a narrow stone path to the beach. In early May, it was already a little crowded. But if you looked away from the couples selfing each other and some unfortunate rocks in the sand, the scene behind you is one for the geography books.


The church’s gold dome sticks up high into the sky in front of hotels and apartments in red and yellow and white, all with balconies and people staring down at us. Puffs of clouds hung along the side of the cliffs, covering the pine trees and shrubs like cotton candy. We walked west along the stone trail and as the beachcombers vanished, we passed white wrought-iron balconies with red flowers sprouting from clay planters. Small private fishing boats anchored off shore. The water near shore was so clear it was almost turquoise. The fresh smell of fennel filled the cool air.

Marina snapped pictures. I took notes. We hugged around every corner offering another new view.


As a child I was heavily into Greek mythology. I read about the Sirens, the sorceresses who sang so sweet, they lured sailors of Ancient Greece to throw themselves overboard desperately trying to reach the shore, only to perish in the effort. The Sirens were said to have sung from this Amalfi Coast.

I know exactly what they sailors heard.


Then again, maybe the sailors caught a break. At least they didn’t have to shop. Actually, I like to shop. If you’re living in Italy you’d better learn. The concept of “La Bella Figura” doesn’t just apply to women. Italian women don’t hang with men who dress like they just got off a motorcycle or hiking trail. But shopping in Positano is hazardous to your bank account. The prices for men’s clothes are good. The problem is there is so much good men’s clothes it adds up.

As we strolled up the alleys, we passed dozens of boutiques all with mannequins dressed in summer clothes as if they were well-dressed corpses on a Greek yacht. These are Marina’s Sirens. Prompting me with a couple of verbal darts at clothes I brought from the sartorial backwater that is Colorado, she lured me into Tre Denari. Once featured in The New York Times, Tre Denari’s outside display has summer leather loafers in every color in the rainbow. After telling me the red ones made me look like a “checcha,” (extremely feminine man), I bought a pair of gray ones that look casual yet elegant and will be perfect on that Greek island we’re hitting in August, although I’d still get my ass kicked in every bar in Texas.

Across the street and up a ways in a lovely shop called Mastro I bought a pair of linen Bermuda shorts the color of straw and a navy linen long-sleeve shirt. She nodded her approval with a sexy wink and smile and I pulled out my credit card.

As I’ve said, women rule the world. We men do what they say just to share it with them.


Still, what Positano lures people with today aren’t mythical voices. It’s views. Marina found the perfect dinner spot. C’era Una Volta (Once Upon a Time) is on the main road, Via Marconi, with a big terrace lined with yellow wildflowers and overlooking the sea. Alternating lights of blue, green, white, red and yellow hang over a wrought-iron railing. Evening clouds started covering the tops of the cliffs behind us.

C’era Una Volta serves some of the best seafood on the Amalfi Coast. My grilled spigola (sea bass), complete with the head attached but no bones, was perfectly grilled, light but meaty with that succulent grilled touch. Looking out at the darkening shadows of fishing boats while eating flawlessly prepared fish that one of those boats caught that day is getting a true taste of the Amalfi. 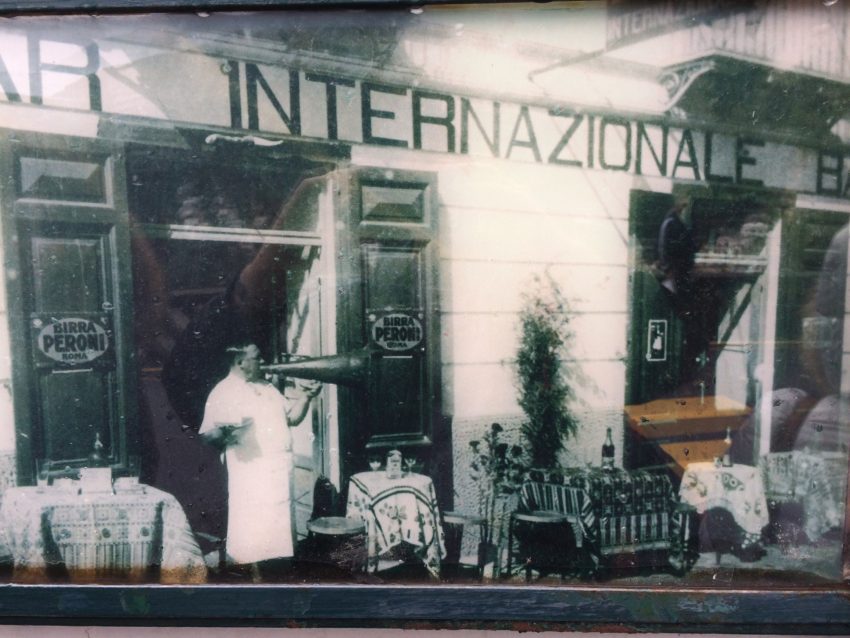 But what do you do in Positano when it pours? You do what the Amalfitani do. You go to a cafe. Next to the bus stop on Marconi is the Bar Internazionale. It has held up this spot in Positano for 100 years and inside were locals who no doubt spent most of those years here. Old men in stocking caps and raincoats talked over espressos. Women chatted while eating some of the mouth-watering desserts behind the counter. Old Chianti bottles in wicker baskets lined the upper walls. It was the perfect place to sip a caffe schiumato (kind of a mini cappuccino), read the paper and wait for a bus.

Before catching the train in Sorrento we had lunch at the swanky La Basilica. Down a quiet alley from Sorrento’s tourist-prowling main square, I had another meal that makes my Italian Food Hall of Fame. I had gnocchetti with prawns and smoked salmon, little potato dumplings with a heavy cream sauce soaked with bits of prawns and smokey fish. I found myself moaning in near sexual delight as Neapolitan love songs such as “Santa Lucia,” “O Sole Mio” and “Anima E Core” filled the air.

Before boarding the train for Naples, Marina and I agreed. Every anniversary, we must heed to the Sirens.