Mamma Mia! Skopelos and Sporades Islands are specks of paradise in the Aegean Sea

SKOPELOS, Greece — Three times a week for the last few years, the little Attikon Open Air Cinema on Skiathos has played “Mamma Mia!” Besides being the worst movie Meryl Streep and Pierce Brosnan ever made (There’s a reason none of her 21 Oscar nominations were for her singing, and James Bond DOES NOT sing.), it is a chick flick of nauseating proportions. It’s so sugary sweet, you could pour the script on pancakes. Yet the film is revered on this little Greek island as if it’s “Gone With the Wind.”

The Greek gods of Zeus, Poseidon and Apollo have been replaced by Abba.

Yet behind the schlocky script, sleazy characters and song and dance routines right out of the Des Moines Dinner Theater, the scenery is worth an Oscar. If you don’t know the 2008 movie, it’s about a young woman who’s getting married and invites three men from her mom’s past hoping she’ll meet her real father. Her mother runs a hotel in Greece and organizes the wedding on an idyllic Greek island right out of the pages of Homer. 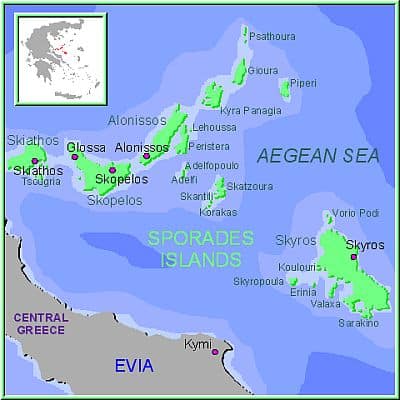 It is about 80 miles north of Athens in the Sporades Islands and about 15 miles from our hotel on Skiathos. White, sandy beaches. Dramatic cliffside scenery. Languid port lined with restaurants slinging cold beer and fresh seafood. Oh, yes. The cute white chapel where the wedding in “Mamma Mia!” takes place, one of 360 churches on the island, sits atop a cliff like an empty souvenir stand. Meryl Streep pilgrims and bored, henpecked men make the climb up for their significant others’ star Instagram posting.

While my girlfriend, Marina, gets weepy discussing the movie, Skopelos lured me with its other charms, such as its 36 beaches. It took a lot to get me off Skiathos. On our second straight August on Skiathos, we upgraded to the four-star Esperides Beach Resort. It has a gorgeous circular pool around a concrete island of lanais chairs. An affordable beach bar sits next to a beautiful sandy beach with nary a rock and water so clear we could identify the fish swimming around our ankles. Our balcony overlooked it all and the breakfast buffet (Marina’s one travel must by threat of garotting in my sleep.) had everything from tiropitas (Greek cheese pies) to baked beans and sausage. It seemed to cater almost entirely to Greeks, English and Italians. The hotel manager said I was not only the only American in the hotel, I was the only American they’ve ever had.

Last year we were among the many Italian residents who took advantage of the 90-minute direct flights from Rome. As I blogged last year, Skiathos has 65 beaches and a string of buses that cruise up and down the southern road linking them all. The island has a new and old port, all teeming with great tavernas where I could drink my ouzo on ice and many romantic restaurants with their own twists on the delicious Greek traditional dishes. I could live on Greek salads.

In fact, on Skiathos, I do.

But after so many days in paradise, you greedily want more. So from our beach dock we took the water taxi 15 minutes to the old port where we boarded the Kassandra Delfinous for one of its daily trips to Skopelos. The Kassandra Delfinous is a 150-foot yacht with seating areas in the open-air port and aft.

The Kassandra Delfinous is a cattle car. About 200 people poured onto the boat, giving us a dim glimpse of what a cruise would feel like. Marina and I gave blood oaths never to take a cruise vacation and fortunately this was only one day.

But unlike cruises where you go an entire day without seeing land, the views were spectacular. Coming out of Skiathos harbor we could see some of the beautiful high-end homes built along the sea. We saw the pine forests above the beaches and pleasure boats bobbing up and down on the water.

It’s only 15 minutes to Skopelos, an island of 37 square miles, just slightly bigger than Mykonos. Skopelos comes into view in the form of Kastani Beach, featured in a “Mamma Mia!” scene that fortunately escaped my memory bank. Kastani is a gorgeous beach stretching about 200 meters where a rocky outcrop separates it from another stretch of sand. A hidden trail through some vegetation leads to another small, secluded beach.

Despite 200 of us invading this beach and certainly pissing off those already on it, it didn’t feel very crowded as we laid on our beach towels for a couple hours. I always say you have no idea what freedom is like unless you decide on what Greek island you want to visit on your way to a boat dock. Greece has 6,000 islands. Each one has its own history, geography, beaches.

Skopelos has a beach definitely worth the big screen.

We next stopped in Skopelos town, one of two “towns” on the island. The dock is lined chock-a-block with restaurants with covered, outdoor seating at tables all looking out onto the water. Marina and I ventured up the hilly historical center of the town looking for a taverna off the well-beaten path. We passed jewelry stores, clothes stores, souvenir stores. We saw one restaurant. It was closed.

We passed a local who looked as if she was showing around some visiting friends. We asked about a restaurant off the dock.

“I’m sorry. We only have two,” she said. “And they’re closed until evening.”

Too hungry and thirsty to be crestfallen, we took a seat and feasted on giant shrimp, souvlaki and a mountainous Greek salad topped with that huge, gorgeous chunk of white feta cheese covered in rosemary. Along with an ice-cold beer, it didn’t feel touristy at all. It felt as if we were eating in a Greek grandmother’s seaside home.

(By the way, the Ancient Greek civilization flourished in the 8th century B.C. However, the Greeks still show evidence they have the same superior minds that gave us democracy, architecture and theater. Every beer we ordered came in a frosted mug. The Greek beer scene hasn’t advanced like the rest of the world but the country’s national Mythos beer tasted like the best in the world just the way it was served. Italy? Get on board.)

Ironically, Skopelos was once famous for its wine. The Cretans introduced viticulture during the Bronze Age, Sophocles even wrote a play called “Philoctetes” which includes a wine merchant on his way to “Peparethos,” the island’s first name before it was changed to Skopelos, which comes from Staphylos, the Greek word for grape.

On the way back to Skiathos, we cruised by the Al Giannis Chapel of “Mamma Mia!” fame. I think I saw a woman walking up the steep steps dragging a man wearing a birdcage around his neck. We had a long swim at sunset on beautiful Lalaria Beach on Skiathos before heading back to the port.

Our outer-island exploration wasn’t over. Every day as we took the steps down from our fourth-floor room, we looked out into the Aegean to see a small island out in the sea. It wasn’t too far, maybe four miles.

It’s the isle of Tsougrias, a natural habitat governed by Skiathos with one of the best nutshell descriptions in the Greek Islands:

It has a beach, lounge chairs and a bar. That’s it. It has no inhabitants. A small boat leaves Skiathos every morning and in 10 minutes we stopped at a tiny dock. About a dozen of us walked briskly along fine, white sand to the plethora of comfy lounge chairs, all with accompanying umbrellas.

With a backdrop of pine trees, it was the perfect paradise to while away an entire afternoon. We had nothing to do and nowhere to go. Well, we walked the 20 feet to the bluest waters we’ve seen in Greece. It’s the kind of blue that changes shades as you wade out 100 meters up to your neck. It went from green blue, to sky blue to royal blue, an absolute rainbow of the best the Aegean Sea has to offer.

In early afternoon we sat at the bar with the sandy floor and ate roast chicken off giant spits spinning slowly next to the beer spigots. Along with a big Greek salad and an ice-cold beer, we sat in the shade and wondered about the paradise we’ve discovered. From one paradise to another to another, Greece’s Sporades Islands are 90 minutes from Rome but light years from Rome’s problems. The Sporades have no garbage. They have reliable public transportation. They have no mafia. They are specks in a blue sea that make you throttle back and realize there is no such thing as wasting time doing nothing.

Marina and I have decided the Sporades will be our annual August getaway. Sandy beaches. Greek salads. Frosted beer mugs. Every day sunny, dry and in the ‘80s.

These are scenes I don’t mind seeing again.