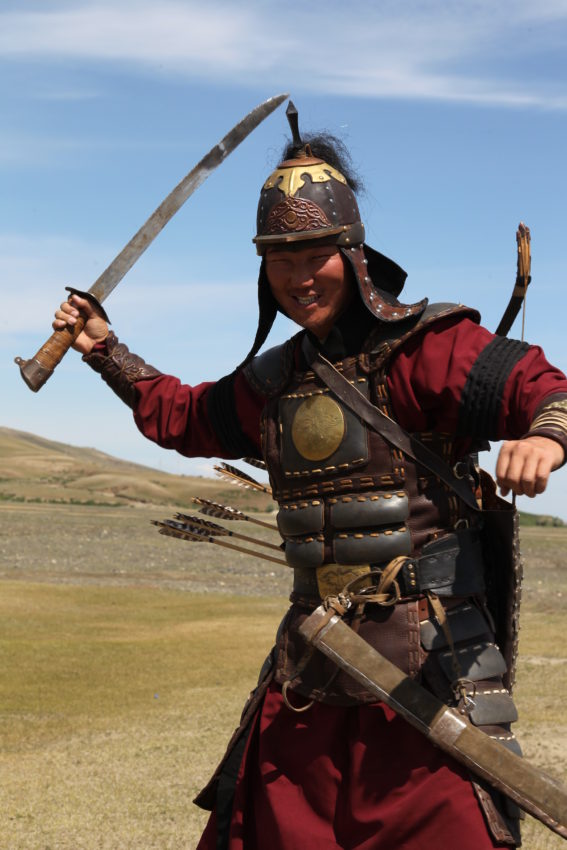 “The distance between heaven and earth is no greater than one thought.” – Mongolian proverb

KNOVSGOL NUUR NATIONAL PARK, Mongolia – For me heaven in July is 60 miles from the Siberian border, sitting by a royal blue lake so clear I can see fish 50 feet below the surface.

The only humans near me are four traveling companions and some Mongolian nomads cooking mutton. We’re all outnumbered 3-1 by the curious yaks resting near me.

Yaks aren’t the prettiest beasts. They look like horses with dreadlocks. But they certainly are among the most peaceful.

They don’t see many tourists in this part of the world so they eye me like giant cats waiting to be fed. Or maybe they’d like to ask, “Why are you here?” Yes, indeed.

Just look around. The next day I’m riding a horse past the yaks and the lake and our ger camp deep into a lime green forest. We pass through a meadow of wildflowers. To our left is a mountain covered in beautiful fir trees greener than anything I’ve seen in Ireland.

We’re at about 7,300 feet and we see no industry. No factories. No trucks. No loggers.

“If this was in Europe,” said Alex, a Dutchman I met on the trip, “this place would be covered with hotels.”

Mongolia remains one of the last unspoiled destinations on earth. It’s not just because it’s the world’s most sparsely populated country. Its 2.8 million people are sprinkled around a nation three times the size of Texas. That’s 1.8 persons per square mile.

You can travel overland for five or six hours through some of the world’s most spectacular scenery, where mountains stay snowcapped all year round, without seeing another person. The village of Shine-Ider has 100 residents. Mongolia has so few settlements, Shine-Ider is on Lonely Planet’s national map.

Mongolia’s unspoiled nature isn’t by design. Foreign powers ruled Mongolia for nearly 400 years with the exception of pockets of freedom ranging from a few years to seemingly a few hours. From 1920-90, the Soviet Union controlled Mongolia with an iron fist. No one could get in. No one could get out.

When Mongolia gained independence in 1991, it had more pressing needs to develop than tourism. Thus, I realize something while traversing overland 1,500 miles for 16 days.

What I’m seeing is pretty much what Genghis Khan saw 800 years ago.

My first brush with the life of Genghis Khan comes on my first day after we leave Ulan Bator, the gritty capital with architecture right out of 1960s Siberia but with a growing feel of cosmopolitan chic.

Within two hours our four-wheel drive, Soviet-built van is puttering along the base of giant green hills. Cows and sheep graze in the foothills without a farm or Mongolian anywhere in sight. Shepherding us into northern Mongolia are eagles low enough I can see them staring at me.

We pass an ovoo, a triangular Mongolian cairn made of stones, paper and prayer flags. Mondu Khai, our stocky driver whose face is as tough as the roads we’re negotiating, gets out of the van. He walks slowly round the cairn three times for good luck from the spirits and ancestors protecting the land.

I learn that the practice predates Buddhism in the 6th century B.C. and that Genghis Khan never entered battle without paying homage. Knowing Genghis Khan conquered the world from Korea to Hungary, I quickly fall in line.

Six hours later we arrive at Amarbayasgalant Khiid. It’s one of the few monasteries the Soviets didn’t destroy in their sweeping rampage to wipe out Mongolian nationalism. The 18th century structure still has 27 temples and daily prayer sessions where youths in maroon-colored robes chant while doing their best to ignore us.

Next to the monastery is the most authentic experience of Mongolian travel. The ger is the traditional tent-like shelter where Mongolians have lived, slept and ate for 2,500 years. They’ve changed as little as the landscape. I duck under the doorway to find five beds encircling the round structure that’s no more than 30 feet in diameter.

A wood stove and a small table are in the middle. An iron pipe goes from the stove through the top of the roof.

The quality of beds varies. The only uniformity is their length. I’m 6-foot-3 and I sleep in the fetal position to prevent my feet from sticking in someone’s face. The mattresses range from camping-like comfort to the approximate softness of a freeway.

During our trip we see some luxury gers, complete with thick, hotel-quality mattresses, night stands and lush carpeting. But there aren’t many. Rural Mongolia is years from seeing Marriott.

“Tourists are coming to Mongolia,” says Jenny, a young guide whose brutal honesty about her country prevents her from giving her real name. “They don’t want five-star hotels in the countryside. People who come to Mongolia want to see natural life. They want to sleep in a ger. It’s a different lifestyle. Here if there are four- or five-star hotels, I think it’s stupid.”

Yet while the rest of the Northern Hemisphere sweltered in sticky July heat, we stayed refreshed in bone-dry 70-80 degrees, with bright sunshine every day and a nice cool breeze coming down from Siberia.

July is the high tourist season for another reason. Mongolians believe Genghis Khan founded the Naadam sports festival as training for military and hunting expeditions.

In every town, the inhabitants gather for competitions in wrestling, archery and horse racing with 10-year-old jockeys covering 20 miles of Mongolian steppe. The treat near the end of our trip comes in Karakorum, Genghis Khan’s first supply base and the original capital.

On a barren plain that could fit a large American county, local Mongolians gather in a giant circle to see beefy men in traditional high-cut briefs grapple in a day-long elimination tournament.

Not far away, men and women in long, colorful robes shoot arrows at tiny targets while adolescent boys batter each other for position as they head for a finish line after a half-hour ride.

A crowd of a few thousand Mongolians and a handful of travelers politely clap. And somewhere, with an ear-piercing cheer, yells the ghost of Genghis Khan.

This piece originally appeared in the Philadelphia Inquirer on Aug. 13, 2012.