My five best pizzerias in Rome: 72 Ore tops the list

The difference between Roman pizza and American pizza is like the difference between a Maserati and a Ford Pinto. One is beautiful, stylish and delicious; the other is fat, greasy and unhealthy. Roman pizza is thin crust, almost like a big cracker, and not the thick doughy American crust needed to soak up enough grease to clean an International Harvester. American pizza has more ingredients than some jet planes, which makes getting up from the table nearly as big a chore as making the pizza itself.

I worked the summer after my senior year in high school in Eugene, Ore., in a gastronomic horror house called Papa’s Pizza. I was a dough roller, the guy you never see in the back of the room making pizza crusts. I can honestly say not one single ingredient in that pizza parlor was natural. The tomatoes came from a can. The cheese and meats came from a box. About the only thing natural was the lard. Yes, lard. They put lard in the crust.

In Rome, all the ingredients are fresh. The tomatoes taste like apples. The mozzarella has bite. The prosciutto is lean. Finish a pizza and the tin plate does not have a spot of grease. You could wash a doily on it. In Rome, pizza is almost like health food.

So here are the five pizzerias I go when I get a craving, which hits only slightly less often than a heroin addict itches the inside of his arm. Keep in mind, some places are based on just one favorite pizza. I have gone to these many times and some dropped off the list and others were added. It’s kind of like a college football poll. Except my pizza poll is more important. Below is my current top five. Stay tuned. I still have a few to try.

Classic Roman pizzerias have a certain air about them. They are crowded, loud and void of fancy tableware. They are the mechanic’s shop of Roman restaurants. Settantadue Ore is not one of these places. Walk in and you think you’re in a pizzeria in Santa Monica. It’s a big, airy room with a wooden floor as clean as a basketball court. The black varnished tables are illuminated by bright overhead lights hanging from the ceiling. A collection of old clocks on a wall are about all that would distinguish it from any pizzeria in an American strip mall. It was so spotless, it felt unnatural, as if it came out of a box. It’s in Don Bosco, a middle-class neighborhood so obscure in southern Rome, I had to tell my Roman friends where it is.

The first time I walked in with a scambio partner, I felt as if I wasted a long walk from the subway. Atmosphere adds a lot to food and 72 Ore felt too foreign, too clean, too weird. It’s a Roman pizzeria, for God’s sake. Where are the tomato stains?

Then I tried the pizza. Have you ever eaten something you loved your entire life then, one day, you discover a taste that tops all the hundreds, no, thousands of what you thought was good in the past? That’s what the pizza at 72 Ore is like. It’s because of the name. Settantadue Ore means “72 hours.” This pizzeria levitates its dough for three days before it’s served. Most pizzerias levitate for 48 or 56. I’m not a biologist. I’m not a chef. But whatever the process does to the dough makes it the best I’ve ever had. It’s a little thicker than the thin Roman-style crust but it has a flavor, a freshness that’s the same sensation as biting into a fresh baguette on a warm morning in Paris.

Then top it with the classic fresh ingredients you find all around Rome and you have a taste sensation that hasn’t found its way into guidebooks yet.

I went again with Alessandro, my Italian foodie friend, and Robert, the Aussie-Italian who has been a chef and whose taste goes beyond pizza by the slice. The waiter, Federico, remembered my name and even what I ordered the last time. Hell, I didn’t. I just remembered it was one of my biggest taste thrills in Italy.


I ordered it again: speck and gorgonzola. Speck is an Italian meat similar to prosciutto and laid down in big slabs on the pizza. Settled on a bed of tangy, warm, fresh gorgonzola, I was so good I didn’t want to eat it. I wanted to suck on it, like a lollipop. I didn’t want the flavor to end.

They have a wide variety of pizzas, more than most, and thinner crusts can be ordered if desired.

This place near the Vatican has sentimental value. When I lived in Rome from 2001-03, my then-girlfriend and I moved into our first apartment and stumbled onto this place which had recently opened in our Prati neighborhood. It instantly became my favorite pizzeria and held that handle for many years, through every subsequent visit to Rome.

The pizza here is different. It’s called a “pinsa.” It comes from the Latin word “pinsere,” which means “to crush.” The ancient Romans used to eat a crushed flat bun or pie, the precursor to the pizza. The crust is a little thicker but the wood-fire oven still provides those luscious little spots of burnt crust.


Frankly, I don’t care about the shape. La Pratolina stands out because it has the best sausage in Rome. I order off menu. Every time I come in I order a gorgonzola and sausage. The gorgonzola is thick with that tangy bite that makes it my favorite Italian cheese. The sausage bits are fat, juicy chunks of lean pork, brought in fresh from up north in Emilia-Romagna.

The gang joined me and we stocked up on antipasti: croquette andouille, gorgonzola and radicchio, fried bell peppers, suppli. But even when I was full, I finished the entire pizza. Then came the telltale sign: The pan didn’t have a spot of grease. Nothing. A pizza covered in thick gorgonzola and sausage and the pan wouldn’t stain a piece of linen.


But I made room for dessert. The signature Pratolina is a big messy glob of chocolate, cream, sugar and thin pieces of pie crust. The whole thing, including complimentary pre-dinner Prosecco, Merlot wine from Friuli-Venezia Giulia came out to only 21 euros per person.

The name means, loosely, “The Big Eating Cat.” Walk in and you realize pizza isn’t the only interest of owners Giancarlo and his wife. Cats are everywhere. Not live ones, but the walls are adorned with cat portraits, drawings of cat angels, paintings of cats. Two shelves have about 400 cat souvenirs from around the world, from such places as Thailand, Mexico and all over Italy. A silhouette of a big fat cat adorns every pizza box. 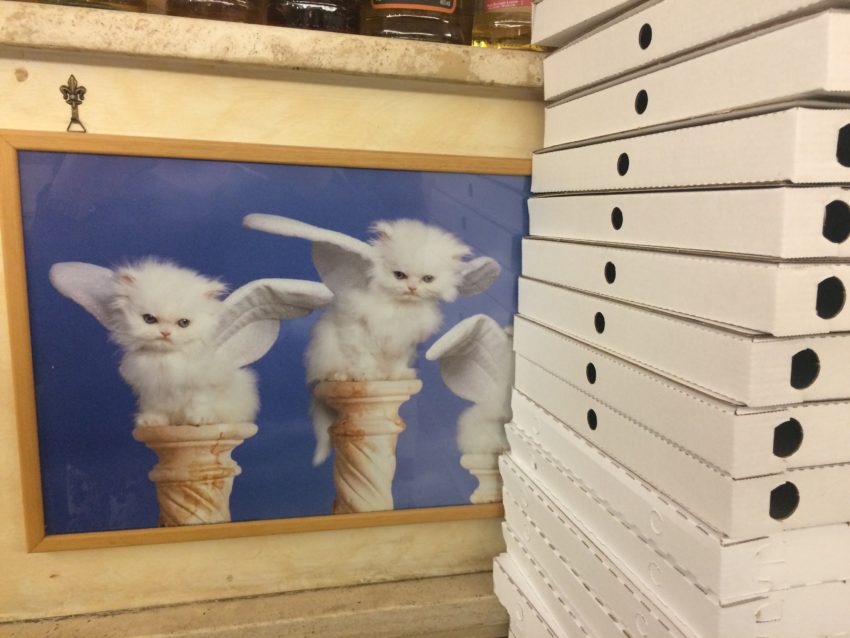 You don’t have to like cats to trek to the far reaches of the leafy Monteverde neighborhood where it has held a spacious spot for 17 years. The Neapolitan-style pizza is packing in the Roman crowd with a variety of pizzas I never saw anywhere else such as the Dolce Forte (Strong Dessert): Ricotta, zucchini, pecorino romano, sardines and pesto.


I never heard of the region in northern Sardinia called Gallura until I had the pizza named for it, the Gallurese: tomato, mozzarella, salami, Greek olives and a liberal dusting of pecorino. The salami was so lean and just crisp enough to set it apart from some of the soggy salami you eat elsewhere. The clincher was the pecorino romano, sprinkled over the entire pizza to give it that big cheesey flavor with every bite.

The most famous pizzeria in Italy, the apparent source of all pizzas around the world, may be Da Michele in Naples, where pizza was invented in the 16th century. Da Michele started in 1870 and invented the margherita pizza for the visit from Queen Margherita of Savoy in 1889. To this day, Da Michele has only two pizzas: margherita (tomatoes, mozzarella and basil) and marinara (tomatoes, garlic and oregano).

When I want a classic neapolitan-style pizza, with the thicker crust, I don’t have to take a train 90 minutes to Naples. I come to Sforno. It’s like Da Michele except it actually includes other ingredients. It’s on a small, dark street off the main drag from Cinecitta, Rome’s old movie studios where the famous Spaghetti Westerns were filmed and where directors like Fellini and Pasolini became famous.

Sforno has three rooms adorned with green and white striped tablecloths and plain yellow walls. There are no hanging photographs of Naples’ harbor or Napoli soccer jerseys. Sforno is strictly about the pizza.

A group of seven of us went into the back room where we ordered some of Sforno’s famous antipasti. First came out cacio e pepe foccacia. It’s thick, hot bread covered in cheese and a little pepper. Picture the famous, simple Italian dish and put it on bread and this is what we munched on. Then came out the suppli, Rome’s famous fried rice, tomato sauce and cheese balls. The others ordered disgusting carcioffi (fried artichokes) and chicoria (chicory which always reminds me of a big tangle of dead, black snakes).


I waited for my favorite pizza at Sforno, the diavola. It’s Italian for “devil” and named for the salami piccante and hot peperoncino they use but don’t overwhelm you to the point of ordering four of Sforno’s artisan Italian beers. The salami was fresh, biting and void of fat. The crust was slightly burnt in spots, just the way I like the occasional crisper bite.

Fellini should’ve made a movie about this place.

This is my “homer” call. Remo is about 200 meters from my apartment in Testaccio on one of the lovelier piazzas in Rome. Piazza di Santa Maria Liberatrice is filled with trees and park benches and old neighborhood people sitting around gossiping in Romanesco, the old, dying Roman dialect. Children play on a small playground across the street from Remo where you can guarantee a large crowd hangs out on the corner waiting to get in.

Remo, celebrating its 40th anniversary this year, is the ultimate Roman pizzeria. Crowded. Loud. Total chaos. It’s run by a family and the brothers are waiters who are always yelling at each other. Tomato sauce is practically flying through the air. Pizzeria Remo is the least romantic restaurant in Rome. But guys, it’s the ideal place to take a first date.


I went with five Roman friends and sat at a table downstairs where the walls are adorned with charming photos of Rome in the 19th century. This place is a Rome institution.

I ordered my regular: a sausage pizza. It’s simple. It’s basic. It’s traditional. But the flavors are not. It’s tomato sauce, mozzarella cheese and fat chunks of lean sausage. I have no idea where these pizzerias find sausage so lean, so void of fat. Maybe there’s a farm outside Rome where pigs run wind sprints. But the sausage combined with the melted, flavorful mozzarella is such a gorgeous combination. Who needs olives, mushrooms, more cheese, pepperoni, hamburger and more cheese like you get in America’s clogged artery alleys?

Get a table in the covered outdoor area on the sidewalk. But be prepared to wait. Remo doesn’t take reservations.