If Covid has grounded me in Omicron hell, at least I can fly in Rome’s gastro heaven.

Next to Paris, Rome is my favorite restaurant city in the world. Only Paris’ ethnic diversity gives it the edge. Rome restaurants are my security blanket. I always tell people the great thing about living in Rome is no matter how lonely you get being alone, no matter how frustrated you get with the bureaucracy, no matter how depressed you get about the language …

… you always have dinner to look forward to.

Then the world is wonderful again. Life is good. Whatever is bothering you seems like another hemisphere away. The quality, the atmosphere, the consistency, they all make Rome restaurants one of the real sure things of living here.

I have done two My Five Favorite Restaurants in Rome blogs. This is my first in more than two years. When Covid curbed my travels abroad in the first half of 2021, I replaced foreign exploration with exploration of Rome restaurants. When I left 2021 beaten and burned out from too many Covid travel restrictions and cotton swabs through my skull, I hit the local places in January hard.

In the last 13 months, I’ve been to 44 Rome restaurants. Only one of my list is a holdover from 2019. Renato e Luisa is again my favorite and will remain so but others have come close. The only rule I have for my list is they can’t be listed in Lonely Planet. Only Renato e Luisa can be found. It was a secret I could no longer hold.

They all offer true Roman cuisine and have one common denominator: The menus are short. Rome restaurants concentrate on a few dishes and make them perfect. Some Italian restaurants in the U.S. have a menu bigger than Denny’s.

If you’re planning on dusting off your passport and making that long-awaited inaugural or return trip to Rome, clip this link for future reference. All these have my personal seal of wild approval. (Reservations highly recommended. Phone numbers do not include 39 country code. In next week’s blog I will do a neighborhood guide with more suggestions.):

My defending champion. This is where I take all visiting guests. No one has ever left disappointed. It’s on a quiet back alley near Torre Argentina and a short walk from the partying in Campo de’ Fiori. It’s where locals go.

Renato e Luisa is Roman food with an elegant twist. My must appetizer is the goat cheese with walnuts and honey. I like the fettuccine pachino e ricotta di bufala (Flat pasta noodles with buffalo ricotta and cherry tomatoes). Meat lovers or those tired of pasta should try the tagliata di manzo all’aceto balsamico (lean beef with balsamic vinegar). Renato’s signature dish is cacio e pepe e fiori di zucca (pasta with pepper and pecorino cheese and courgette flowers).

All their desserts are made in house, as is their delicious bread. I’m not a huge tiramisu fan but this is one of the best in Rome.

Renato is also very social. The son of a famous butcher in the neighborhood, he’s a self-taught cook who scores big with his experiments. He speaks English and will entertain you with conversation between courses. 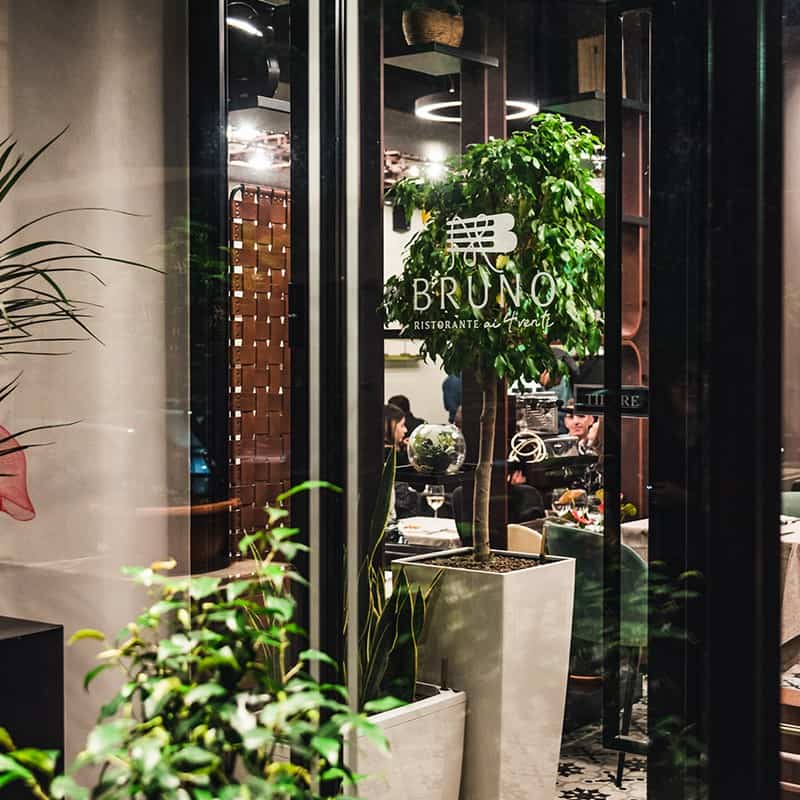 Tired of tourists? Come here. This is an ode to my Monteverde neighborhood, totally local but only a 10-minute tram ride from Centro Storico. Bruno is also across the street from the Quattro Venti regional train station, making it an easy destination.

This simple but elegant restaurant has been around since 1962 and has lovely outdoor seating. Its emphasis is seafood with influences from Abruzzo, the rural region east of Rome that borders the Adriatic. Spigola (sea bass) is a local specialty found thick in the Mediterranean Sea. Try the spigola al forno con patate (baked sea bass with potatoes). I’m not a big carciofi (artichokes) fan but the orata al forno con carciofi (baked sea bream with artichokes) is a house specialty.

Bruno has lots of seafood pasta dishes, too. My favorite is the fettuccelle di grano duro con polpo (long, flat wheat pasta with octopus). The saute di cozze (mussels) are a recommended appetizer.

Ask for Alessandro, the owner who’s part of the third generation running Bruno. 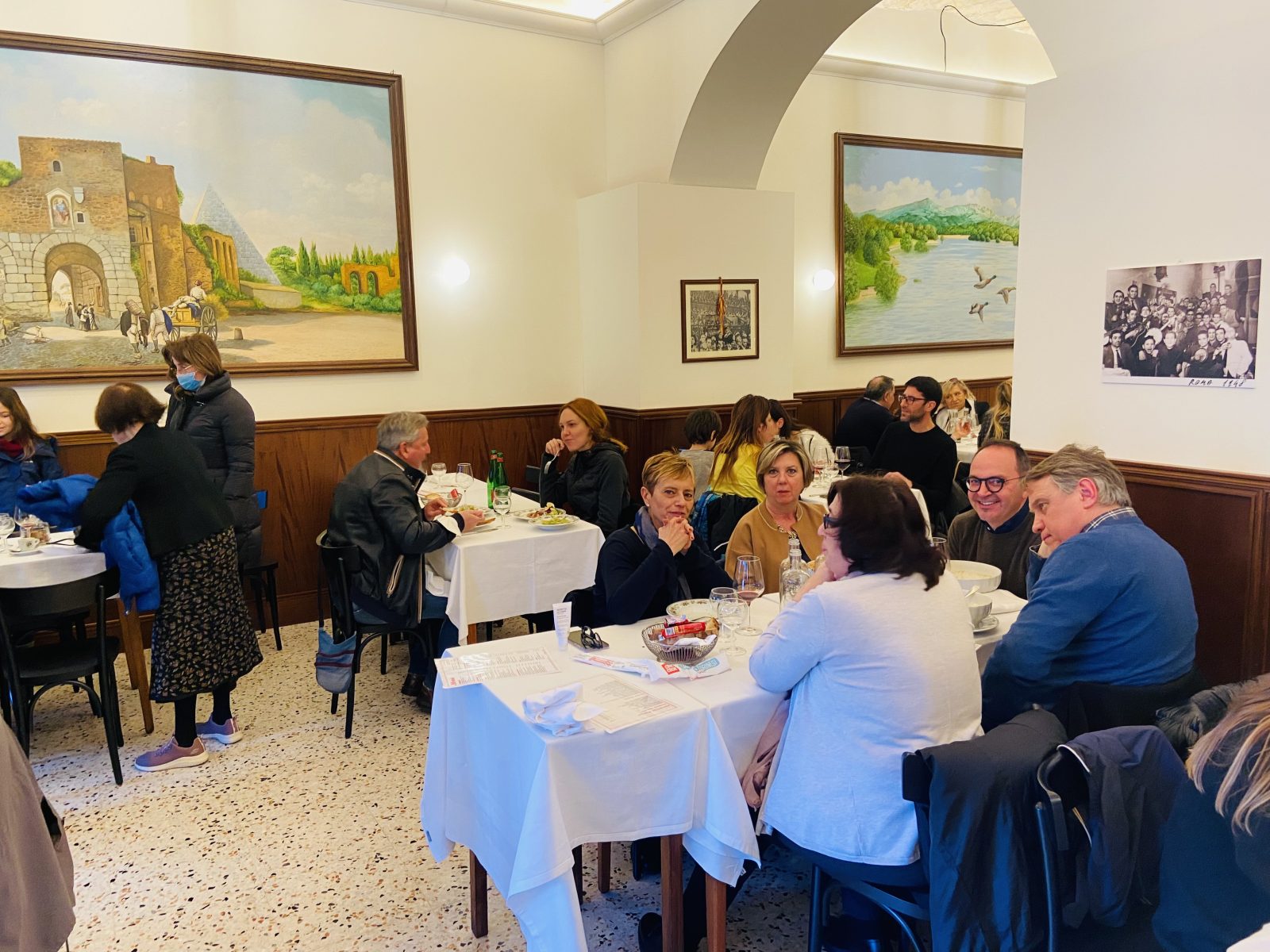 I lived in the Testaccio neighborhood for four years and never came here. It was always full. I finally made it Sunday and learned I waited too long.

This is a true old Rome trattoria. The emphasis is on old. Testaccio’s first restaurant originated in the late 1800s. When the slaughterhouse was built in its space, it moved a few blocks to its current location on Testaccio’s main drag in 1911. During World War I it was the place locals went for a good meal, a cheap glass of wine and a good card game.

It remains the favorite among lifelong residents. The waiters are old, distinguished gentlemen who hustle around with big family style bowls of rigatoni and spaghetti. On Sunday it filled with families coming in from church at Chiesa di Santa Maria Liberatrice down the street.

My vitello alla cacciatora (veal stew in white wine and rosemary) was so tender I could cut it with a fork. Vegetarians can dig into scarola, an indigenous Roman vegetable kind of like spinach but with less gross texture. (Sorry. I hate spinach.)

Homemade desserts line one counter. I had a big chunk of crostata di visciole (sour cherry pie), so sweet it tasted like blackberries. My waiter told me the apple was even better and to prove it, he gave me a free sample with a scoop of vanilla ice cream.

Oh, did I mention the half liter of local red wine for 4 euros? Yes, this is a true Roman trattoria. A few outdoor tables on busy Marmorata are available 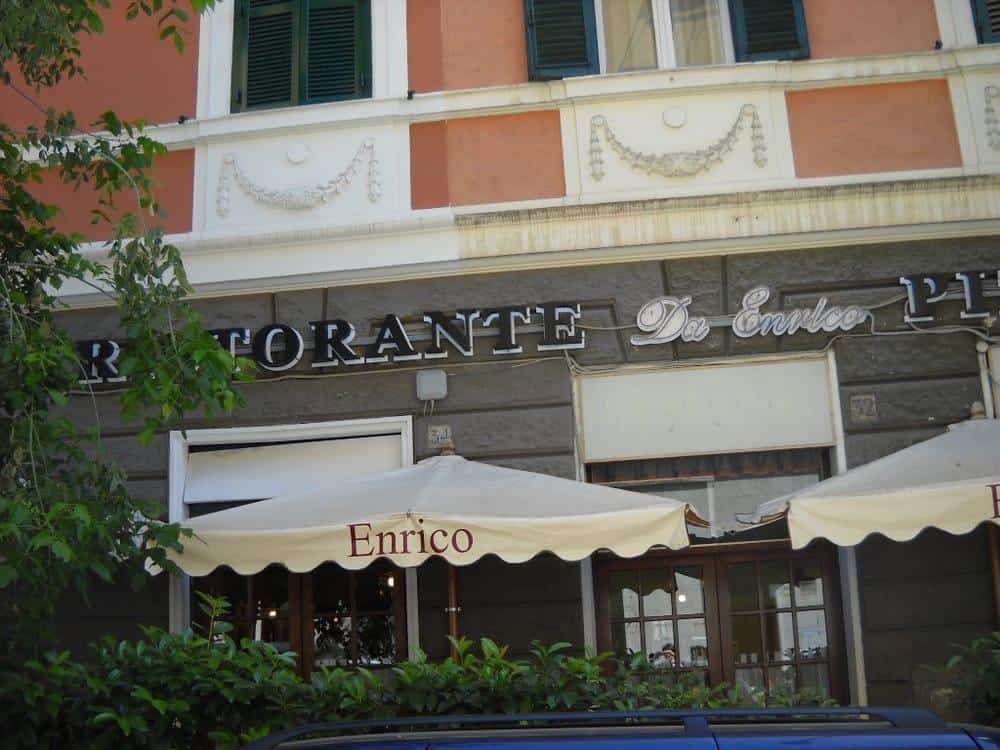 This is another place you’ll only find locals. It’s easy to reach, just a three-minute walk from Piazza Bologna where the Metro subway stop is only three stops past the Termini train station’s.

Like Perilli except only 42 years old, Enrico is an old-fashioned Roman trattoria but it has a little bit of everything. Pizza. Seafood. Pasta. My ravioli was one of the best I’ve had in Rome and so was the tonnarelli alla gricia (round, long pasta with pecorino cheese and bacon). I may have to return for the seafood risotto and monkfish.

The waitstaff are all veterans and know everything about every dish. If you can find one who speaks English, he’ll enthusiastically explain everything.

Don’t forget the house wine, which comes from the underrated Lazio vineyards outside Rome. 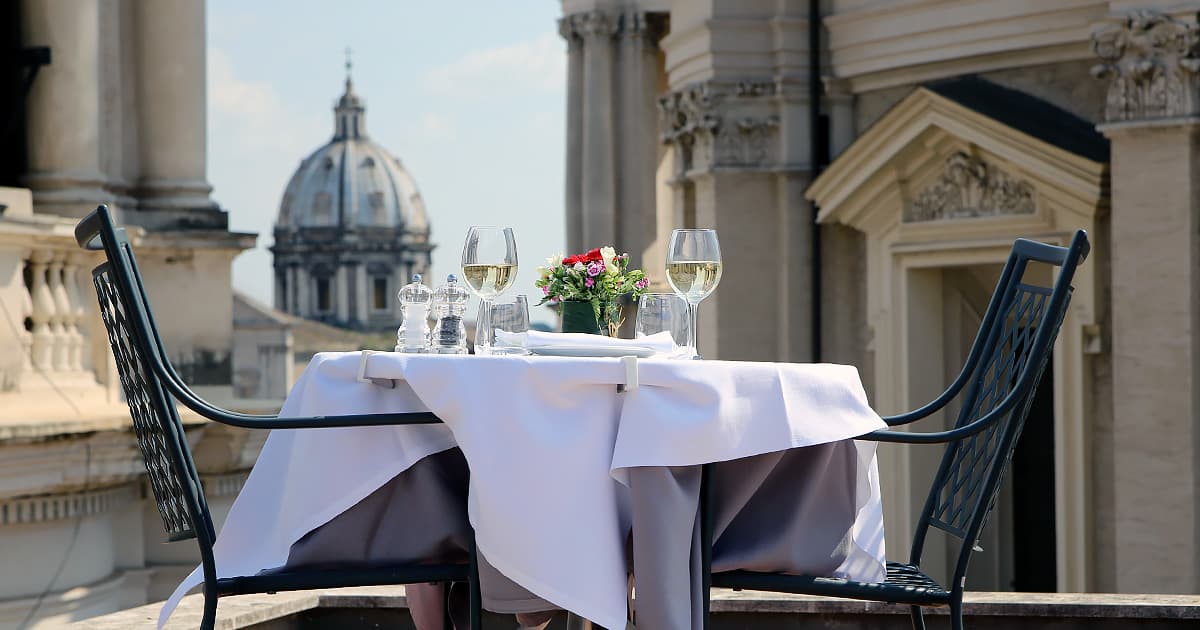 This arguably has the best restaurant view in Rome. It’s located on the top floor of 17th century Baroque Palazzo Pamphili designed by Francesco Borromini, one of the greatest leaders in Baroque architecture.

It’s adjacent to Sant’Agnese in Agone, the massive Baroque church that flanks Piazza Navona. The restaurant has jaw-dropping views of maybe Rome’s prettiest piazza and the outdoor tables are located right above Gian Lorenzo Bernini’s iconic Fountain of Three Rivers. Have a pre-dinner drink at the adjacent rooftop bar with views over Centro Storico (The bar requires a reservation, too.).

During winter, dine inside and stare at some of Bernini’s frescoes.

But unlike most restaurants where the food is as bad as the view is good, Borromini’s food is superb. It specializes in elegant seafood such as linguine with lobster. I always get the grilled octopus which is fresh out of the nearby Tyrrhenian Sea. Also try the fettuccine al ragu di lepre (flat, long noodles in wild hare sauce).

Yes, it’s expensive. But one look at the view and you won’t mind. This is the Rome you dreamed about.