I’ve always told people wanting to party in Rome that this city isn’t a bar town. It’s a restaurant town. However, it is the world’s greatest bar town in one specific genre: wine bars.

Called enotecas in Italian, they enjoyed a renaissance in the 1990s and now are my preferred destination on any night out in Rome. With the world’s greatest wine (Stick it, France.), Rome’s enotecas never fail to deliver. There are few simple pleasures in life greater than sitting on a quiet Roman street, drinking good wine with good friends and staring at 2,000-year-old, back-lit monuments.

Enotecas have been around Rome a while. Despite wine pouring like water here ever since the Roman Empire, the first acknowledged bar aimed specifically at wine enthusiasts is generally considered Cavour 313, which was established in the Monti neighborhood near the Colosseum in 1935.

In the ‘60s and ‘70s, they became gathering places for Italy’s new left who liked a little Chianti and smoked mozzarella with their Karl Marx. Other enotecas popped up but it wasn’t until the 1990s, when Italy had its biggest economic boom since World War II, did enotecas begin to flourish. Major Italian wine families such as the Antioris, the Gajas and the Fresobaldis felt they could capitalize on Italians’ extra spending money by specializing in gourmet wines. Improved technology increased wines’ quality without increasing the price.

With tourism making Italy Europe’s No. 1 destination in the ‘90s, Romans began toasting the new prosperity with wines from every corner of the country.

Today with Italians suffering through a major recession, the enoteca is still the local gathering place. Wine is not only one of Italians’ four major food groups but it is also still remarkably cheap. At the best wine bars in Rome, you can find a good, high-quality glass of wine for as little as 6 euros. You can find bottles for 13. It’s a cheap, fun night out and with Italian wine having much fewer sulfites and preservatives than American wine, you not only won’t wake up broke, you won’t wake up hung over.

After seven years in Rome over two stints, I’ve been to dozens of enotecas. This week I returned to some of my old haunts as well as tried some new ones to compile my five favorites, in order. In my research I considered wine variety, cost, atmosphere, location and history. Clip it and bring it with you on your next Roman holiday.

1. Il Goccetto, Via dei Banchi Vecchi 14, https://www.facebook.com/Ilgoccetto/, Monday-Saturday 6:30 p.m.-midnight, Tuesday through Saturday noon-2:30 p.m., 06-9027-9201. When I first moved to Rome for my current stint in 2014, I lived in a two-room, cave-like flat for two months while looking for a permanent home. It was a short stumble from both Campo de’ Fiori, Rome’s party piazza, and Il Goccetto which became my local hangout.

Despite its close proximity to teeming Campo de’ Fiori and it creeping into recent guide books, Il Goccetto remains predominantly local. Well-dressed, beautiful people come in after work from offices and shops in the neighborhood for a glass of wine before going home. Or they return at night and join a crowd that spills onto its quiet street in Centro Storico.

Its building is so old, the sign over the door still reads a generic “VINO E OLIO.”

It’s widely been called “the coziest wine bar” in Rome. It doesn’t mean it’s too crowded. You either sit at about a dozen small tables or stand at the small bar overlooking some of the delicious antipasti dishes on display in a glass case. Try the smoked salmon with one of the white wines they have displayed on a small blackboard on the wall.

The prices are reasonable and is a good destination for gift wine. Wine bottles stack the bar from floor to ceiling.

2. VyTA Enoteca, Via Frattina 94, 9 a.m.-11p.m. daily, http://www.vytaenotecalazio.it/, 06-877-06018. This is my new discovery. Opened a year ago by Nicolo Marzotto, who owns the Santa Margarita wine group in Northern Italy, it is a high-end wine bar specializing in the underrated wines of Rome’s Lazio region. Located a block off tony Via del Corso, VyTA continues the area’s upscale vibe with a long, polished bar, nice high tables and a back lounge area with overstuffed couches.

It is here I discovered such great local wines as Cesanese, a deep, juicy, ruby red wine from Frascati, Lazio’s most predominant wine town southeast of Rome. I also fell in love with Malvasia, a rich, widely produced red table wine that has become highly popular in Rome. So fascinated with Lazio wines and inspired by VyTa, I toured Lazio wine country for a recent blog.

VyTA has a restaurant upstairs and a terrific antipasti menu, including arguably my favorite suppli, Rome’s famous fried rice and cheese balls.

The wines are two or three euros more expensive than in other enotecas but you’re also paying for the atmosphere and location, both of which are worth every centesimo. It is only three blocks from the Nuovo Olimpia, one of Rome’s few English-language cinemas.

Good wine and a good movie you can actually understand is a great date night in Rome.

3. Del Frate, Via degli Scipioni 118, 12:30 p.m.-2:45 p.m. Tuesday through Friday, 6 p.m.-midnight Saturday and Monday, https://www.enotecadelfrate.it/, 06-323-67437. This is my sentimental favorite. During my first stint in Rome from 2001-03, I lived in Prati, the neighborhood next to the Vatican. Del Frate, just four blocks east of Vatican City, was my enoteca hangout. It’s my most romantic enoteca, a small room with cozy tables and blown-up displays of wine labels on the wall.

When I returned Wednesday, a cooing couple sat next to me as soft music played overhead. I upgraded and had a wonderful Brunello di Montalcino Col D’Orcia that was well worth the 10 euros. However, many of the wines on the ever-present blackboard are 6-7 euros.

Established in 1991, Del Frate has outdoor seating available at wine barrels on the quiet sidewalk and a restaurant is in an adjacent room that dates back to 1922.

4. Cul De Sac, Piazza di Pasquino 73, noon-12:30 a.m. daily, www.enotecaculdesacroma.it, 06-688-01094. In 2001 I did a story about Rome’s enoteca boom for the Los Angeles Times and Cul De Sac was the first wine bar I hit. Set in a bustling piazza nearly adjacent to Piazza Navona, Cul De Sac has been around since 1977 and has been a gold standard ever since.

No enoteca in Rome may have a bigger wine selection. Its wine menu is — get this — 144 pages long. It’s a book the size of an atlas. It lists 1,500 wines from all 20 regions in Italy. The Tuscany section alone is nine pages. And the selection ranges from a 16.90-euro bottle of Barbera Vegia Rampana to a Barolo La Serra for 384.30 euros.

Cul De Sac has five rows of outdoor tables where you sit elbow to elbow with strangers. It’s a good chance they’re tourists. They make up about 65 percent of the clientele. No, Cul De Sac is not where you go to meet locals but some places attract tourists for a reason. Cul De Sac is fabulous.

The inside has a single row of tables down a narrow hallway where waiters zip up and down using wire snares to pick wine bottles from the highest shelves. I had a lovely Porto Tawny from Portugal for 4.90 euro and a Primitivo di Manduria from Puglia for 5.20.

They have a full menu but I go for their antipasti plate, a large wooden cutting board covered in salamis, prosciuttos and cheeses. 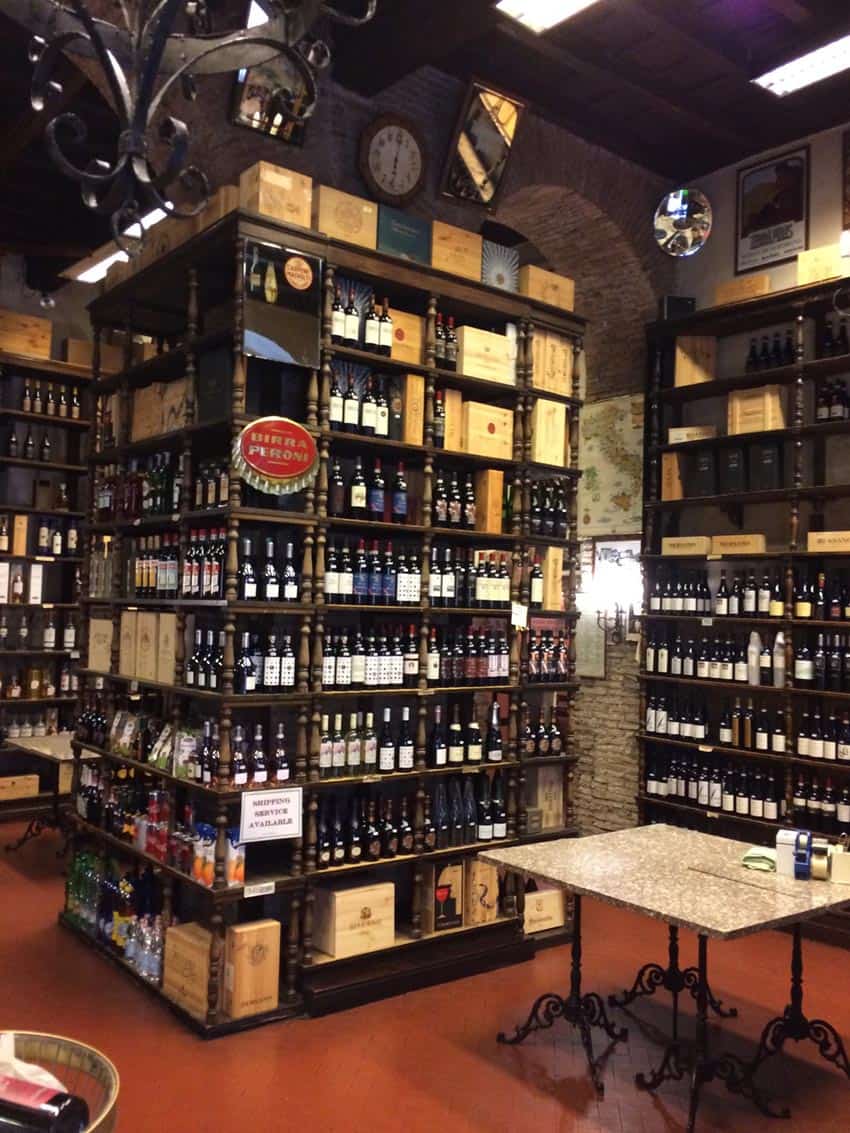 It claims to be the first enoteca in Rome to serve high-quality wine and they still do. When I visited Wednesday, a man pointed out a small sign advertising a Brunello Reserva from the famed Franco Biondi Santi winery for a mere 8,800 euros. It’s under lock and key in another room.

But there is plenty of wine for the common man. The wine-by-the-glass menu has all the Italian standards such as Montepulciano, Barbera and Aglianico for 6 euros, all served with a complimentary cheese and cracker plate. You can get a Barolo, Brunello or an Amarone for 15. I saw a nice bottle of 2017 Chianti for only 13 euros and a Barolo Ca’Bianca for the fantastic price of 31.

Don’t just go to Buccone for the wine and food — they serve lunch and dinner — but go for the history. The furnishings, including a classic old cash register, date back to the early 20th century. Famed filmmaker Federico Fellini hung out here and Cameron Diaz stopped by while filming in Rome.