Night 2 of my Rome beer bar crawl needed a one-day delay. It turns out, Italy’s stronger artisanal beers carry a bigger wallop than I thought. I nursed a rare Rome hangover from Night 1 until I crawled out of bed at 9 a.m. The Excedrin I popped like Baci chocolates had about that much effect against the suffocating humidity and low-90s temperatures of a Rome heat wave that has gone way too long.

But Sunday night my thirst had returned. Rome’s weather does that to you. My second five birrerias were in my south end of Rome — one stumbling distance from my home — and went through the teeming mass of students, trendy Romans and bohemians in the twisty alleys that is Trastevere.

So before I hop a flight to Rio, here is the look of Night 2 on Rome’s burgeoning artisanal beer scene. (Neighborhoods in parentheses):

Alberone is a small, upscale neighborhood of quiet boulevards under shady trees. It’s the farthest birreria from Centro Storico (Historical Center) that I visited. It’s a perfect bar for the affluent locals, away from English speakers in white fedoras and immigrants selling cheap roses and crude jewelry.

One problem: I couldn’t find it. My memory from last summer’s story on Rome’s beer boom, like a long isolated blackout, had failed me. It had no sign. None. I finally asked two guys drinking beer on a quiet patio in the large Piazza Cesare Baronio if it was Hopificio and I was right. A waitress tried explaining in Italian the lack of sign, none of which I understood. The manager tried explaining it in English which I didn’t understand, either.

However, the “Hopificio” sign on the wall inside convinced me this was the home of the Punto G, one of my favorite beers in last summer’s beer tour. It’s an Amber Bock, caramel in color and gorgeous on a hot early evening. Many agree. It won first place in the recent Italian Master Brewery contest.

Hopificio was built two years ago in a former auto parts store. It rotates nine beers on tap and 25 bottles, most of them from Italy. I picked the right time to come. It was happy hour. One of the best beers I’ve had in Europe was only 3.50 euro. The co-owner, Marco Mascherini, is a 30-year-old hip-looking world traveler who worked as a bartender in Sydney nine years ago for six months. Then he was introduced to artisanal beers.

With a look of passion that no one pulls off like Italians, he said, “I tried it and I fell in love.”

This is where I go when I’m out of food or dying of thirst. Preferably it’s both. From my home it’s a five-minute walk on recently remodeled Piazza Testaccio. For nearly 100 years, it was the site of Mercato di Testaccio, one of Rome’s oldest public markets, until it moved near Rome’s old slaughterhouse three years ago. Today, Piazza Testaccio is a big block of white cobblestone with a gleaming white fountain in the middle. Couples kiss on iron benches. Old residents gossip. Children play makeshift soccer games around the fountain.

Behind a small shelter on the sidewalk you’ll see a series of long picnic tables. They’re usually packed with people who come from around Rome to eat what I believe is the best aperitivo in the city. The happy hour buffet usually features three or four different pastas ranging from rigatoni to gnocchi, couscous, rice dishes, vegetables from melenzana (eggplant) to mushrooms. An entire aisle is laid out with plates of cheeses and Italian meats. At the end are piles of L’Oasi’s huge array of designer chocolates that fill the front of the store.

What people have really come for since it opened in 1990 is maybe the biggest beer and wine combo store in the city. L’Oasi features 400 different beers from around the world and more than 1,500 wines. For 10 euros, you get an Italian beer and the all-you-can-eat aperitivo. The rest of the two-story establishment is lined floor to ceiling with wine bottles. Exotic beers fill the windows. I can’t walk home past the place late at night without getting a twinge. 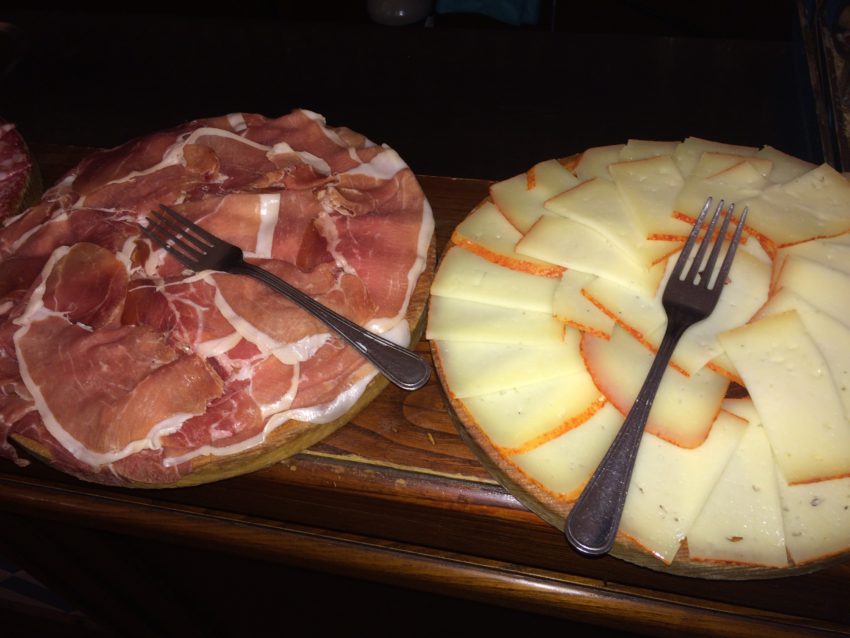 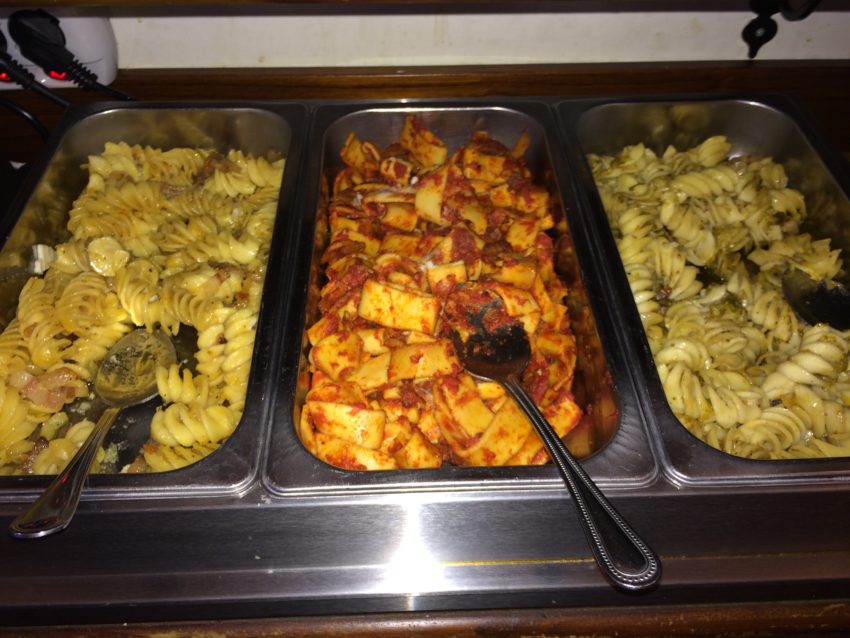 On this night of, ahem, journalistic research, I piled my plate high with pasta under another mountain of rice topped with layered salami and sliced cheese. Meringue squares and jelly filled chocolates ringed the plate. I washed it down with two LA 70s, a Belgian ale from Birrificio Math just south of Florence.

Sit down as the sun sets behind the Tiber four blocks away and inevitably you’ll start a conversation with the friendly locals blissed out over great food and cold beer after a hot day.

Walking across the Tiber River to Trastevere (short for “attraverso il Tevere” or “across the Tiber”) from Testaccio is like going from mass at St. Peter’s to Carnival in Rio. Testaccio’s tranquil, uncrowded scene gives way to a teeming mass of humanity bouncing off bars, restaurants and boutiques in the crowded, narrow alleys. On a narrow street off Piazza Trilussa, where hundreds of youths mingle around a 17th century fountain, is Via Benedetta. The narrow street boasts two brother bars, Bir & Fud and Mac Che Siete Venuti A Fa. Both are owned by Manuele Colonna, a ponytailed native of Trastevere’s bohemian past and considered the godfather of Rome’s craft beer explosion.


Inside is a long line of 36 taps that change every two days. Most of its 200 bottles of beer come from Italy, such as LoverBeer’s Madamin, a Flemish-style beer aged in oak. I had a Montastella, a pilsner way too light at 4.5 percent. How thankful I was the next day that I didn’t try anything stronger.

OK, first, the name. The most unusually named pub in Europe, maybe the world, takes its roots from soccer. Ma che siete venuti a fa is local Romanesco dialect for “What are you doing here?” Colonna is a major fan of Lazio, the cross-town rival of my beloved A.S. Roma, and obviously mentally deficient. Besides that fact, Lazio was Rome’s first team, established in 1900 to Roma’s 1927. When Colonna built the bar in 2001 as Rome’s first to sell Italian craft beers, it was meant for winning Lazio fans to celebrate. The name is a direct shot at any visiting fans wanting to enter.

Of course, they’re welcome. Colonna and I had a lovely talk last summer after exchanging insults about soccer tastes, heritage and mental disorders. His bar, known locally as Ma Che, is tiny. A few bar stools are in front of the tiny bar with the beer menu, mostly Italian IPAs, displayed on a chalkboard. Its specialty is silky-smooth Tipopils, which the last few years has been the best-selling artisanal beer in Rome. All year round, Ma Che has customers spilling out onto the narrow street, plastic cups in hand.

Colonna helped lift Italy’s beer tastes off the sticky floor by working first with Northern European breweries. When artisanal beers developed in Northern Italy in the 1990s, he was one of the first to hop on the beer wagon.

“We are one of the last countries in Europe for beer drinking,” he said. “Now with the craft beer movement, it’s totally a novelty. It seems everybody now drinks beer. We have more breweries now in Italy than Belgium. That’s crazy.”

On the south end of Trastevere, the trendy restaurants and reviling exchange students are left behind. Via Portuense stretches not far from the Tiber through a scruffy section of 1960s apartment houses and onto a stretch of modern restaurants. On Sundays, Via Portuense is the site of the Porto Portese Flea Market, one of Europe’s largest flea markets where you can buy everything from leather jackets to silverware for 1970s prices.

In stark contrast to the crowded, hot, chaotic atmosphere of the flea market, Brasserie 4:20 sits nearby as a slice of elegance. Brass railings highlight stained wood bars and tables where gourmet items like Kobe beef burgers dot the menu. I walked in with a Roman friend and beer novice, Marie Laura, hoping to see the owner Alex Liberati. He’s a long-haired Italian-Irishman whose parents’ many trips to North America, and his travels searching for quality beer, have left him with a Southern California accent.

He calls me “Dude” while spinning tales of how he’d fill his car with beers from around Europe and bring them back to his thirsty friends. He still remembers the curious looks he got from customs agents. In 2007 he found this bar in Rome’s first commercial train station in the 1800s and took the name from April 20, National Weed Day. No, as a youth, beer wasn’t Liberati’s only libation.


Today it has developed into an off-beat hangout for Rome’s youth. We sat down next to two 20-year-old blondes from Amsterdam, Ilse and Doris. They were leaving Rome the next day and were going to get their night life’s worth out of it. I learned that they love quality beer and Ilse works in an Amsterdam bar called Arendsnest. We talked about how many bad beers there are in the world. Thus, I learned the Dutch word for “sucks”: Zuigt (pronounced, somehow, ZSHOUT).

After about eight beers in five hours, I realized for the first time in a long time in teetotaling Rome, I was tipsy. OK, more than tipsy. I thought about the biggest social faux pas you can commit in Rome: public drunkenness. Can Romans keep supporting all these birrerias drinking beer that’s nearly as alcoholic as the wine they’ve been sipping all their lives? Is all this a fad? To a man, no one in the industry is worried this will go away.

“People in this country love to taste,” said Liberati, also a board member of Italy’s brewers association, Unionbirrai. “They fall in love with tasteful and characterized food, wines and, also, of course, beers. They can recognize the difference.