Night out in Rome after lockdown: Great food and friends can’t replace a city’s sorrow

I approached the group lounging outside the pub undecided if I had a bigger thirst for beer or human contact. I proceeded to get the first elbow bump of my life from my Belfast buddy, Patrick O’Byrne, and my Rome friend, Sergio Serra. A barman wrote “14” on my hand, and I waited until my number was called for my first beer since March 8.

Monday was the first day restaurants and bars could open for sit-down service under Italy’s Phase 2, the lightening of restrictions from the world’s first national lockdown. Since Italy zipped up its national, regional and city borders like vacuum-sealed Tupperware March 9, it has led the Western world in most cases and deaths, then got lapped by the U.S. then slipped behind the United Kingdom. Lately Italy has seen its curves begin to flatten.

If it’s not time to celebrate a clear victory over the coronavirus, it’s at least time to say “Salute!” to old friends and a glorious life in a beautiful city I have greatly missed. For Rome, this pseudo opening night was a flop. Few ventured out. Many businesses and restaurants remained closed, part by fear and part by protest. But for me, starved for a meal in the best restaurant city in the world and a face to face conversation, it was one of the best nights in my six years in Rome.

However, life in Rome remains dark. It’s like returning to your second home on the beach and Steven Spielberg turned it into a set for a post-apocalyptic horror film. This city is still haunting.

It started out with my first haircut in three months. I’m blessed to have all my hair at this age but after three months, I looked like an extra from “The Brady Bunch” after a three-day binge and a train wreck. Monday was the first day barbers and hair stylists could open and when I entered, my Peruvian hair stylist greeted me behind a suction mask and a plastic face shield. I didn’t know if she was going to cut my hair or blow torch it.

Finally presentable to the public, I took the subway to Finnegan’s, a lively Irish pub just 400 meters from the Colosseum.  Patrick was in fine fettle. Earlier that day his beloved Celtic had just won its 51st Scottish League title in the league office in Glasgow. It’s European soccer 2020. Titles aren’t won on the field but decided in board rooms by officials in coats and ties.

The collection outside Finnegan’s had more international flair than the UN. We had people from Germany, Wales, Mexico, England, Romania, Italy, Scotland, from California and upstate New York. Not surprisingly, we talked little about the lockdown. We’re all tapped out, burned out. We’ve told our stories to too many family members and friends back home. We’ve complained enough before holding our tongues, knowing we’re not among the 32,000 who’ve died in Italy, nearly all alone with a tube down their throat.

We all sat with our masks around our chins and beers in hand and had a lively discussion about which one of Donald Trump’s orifices we’d like to shove Trajan’s Column. With a woman from Syracuse, N.Y., I rekindled the recent debate of who’s the worst president in U.S. history: Millard Fillmore, whose support of slavery led to the Civil War, or Donald Trump, whose inaction during the virus crisis has led to nearly one third of the world’s cases and deaths and now wants credit for the great job he’s doing.

About the time we quickly agreed on Trump, since the Civil War was bound to happen anyway and Trump causes projectile vomiting among expats, a barman brought around two big boards of packaged crisps. “Just don’t look at the dates,” he said.

Three Guinnesses later, I poured myself onto a bus for a short trip to Centro Storico. I met Marina for my first sit-down restaurant meal since March 7. Considering the gregarious nature of Romans and their placement of family, friends, good food and wine atop everything in their lives, I expected a bit of normalcy Monday night.

What I got instead was a capital city that remained eerily quiet. The bus passed down Corso del Rinascimento, the main thoroughfare between the Pantheon and Piazza Navona, two of the world’s most popular tourist spots. The street was nearly empty. I wound through the narrow cobblestone alleys to Il Bacaro, one of my favorite restaurants in Rome. It’s one of the most romantic spots in the city, with outdoor tables set in a garden atmosphere under a string of white pin lights in foliage.

Greeting me this night was a stack of wine boxes at the front door. Outdoor seating here isn’t practical under social distancing rules. The man and woman were delighted to see me and let me squeeze through. It was their first night open and had only two reservations all night. Without foot traffic, takeaway business made no sense and tourism in Rome had ground to a halt.

According to Il Messaggero, Rome’s main newspaper, one third of all businesses in Rome remained closed Monday. Many were afraid it was too soon. Others wanted to protest the government’s lack of assistance through this crippling time. Italy already handed out 400 billion euros to small businesses but it’s not enough.

“They have granted us some delay on payments but no cuts are foreseen,” Centro Storico merchant Giulio Anticoli told Il Messaggero. “What we ordered and received before the lockdown will have to be paid but with what?”

Italy’s gross national product has already dropped 4 percent, according to Statista, the statistical portal. Rome gets an average of about 10 million tourists a year. This year it’s estimated Rome restaurants were losing 3 million euros a day and the city will lose 1.5 billion euros in tourism.

The common mantra among Rome restaurant owners is “Senza turismo moriamo. (Without tourism, we die).” The government says they will start letting tourists into Italy June 3 but maybe only from Europe.

Maurizio Camillo, owner of Bistro Rione XIV in Borgo Pio near the Vatican told Il Messaggero, “We feel abandoned. Not even takeaway pays off. I have an employee. His contract has expired. I’m paying him out of my pocket so as not to send him out on the street.”

It’s hard to blame locals for staying home, too. The new rules for eating out has a longer checklist than skydiving. Advanced reservations are required. Diners must sit at least a meter apart. Tables must be two meters apart. Masks must be worn entering the restaurant and to the bathroom and can only be removed while eating. Any establishment less than 25 square meters can only allow one customer at a time. No buffets allowed.

Originally, couples had to declare if they were living together or just friends. Il Messaggero quoted one waiter in Prati asking a couple, “Are you in a joined, stable relationship or just friends? I apologize, I only ask to determine how far you have to sit.” 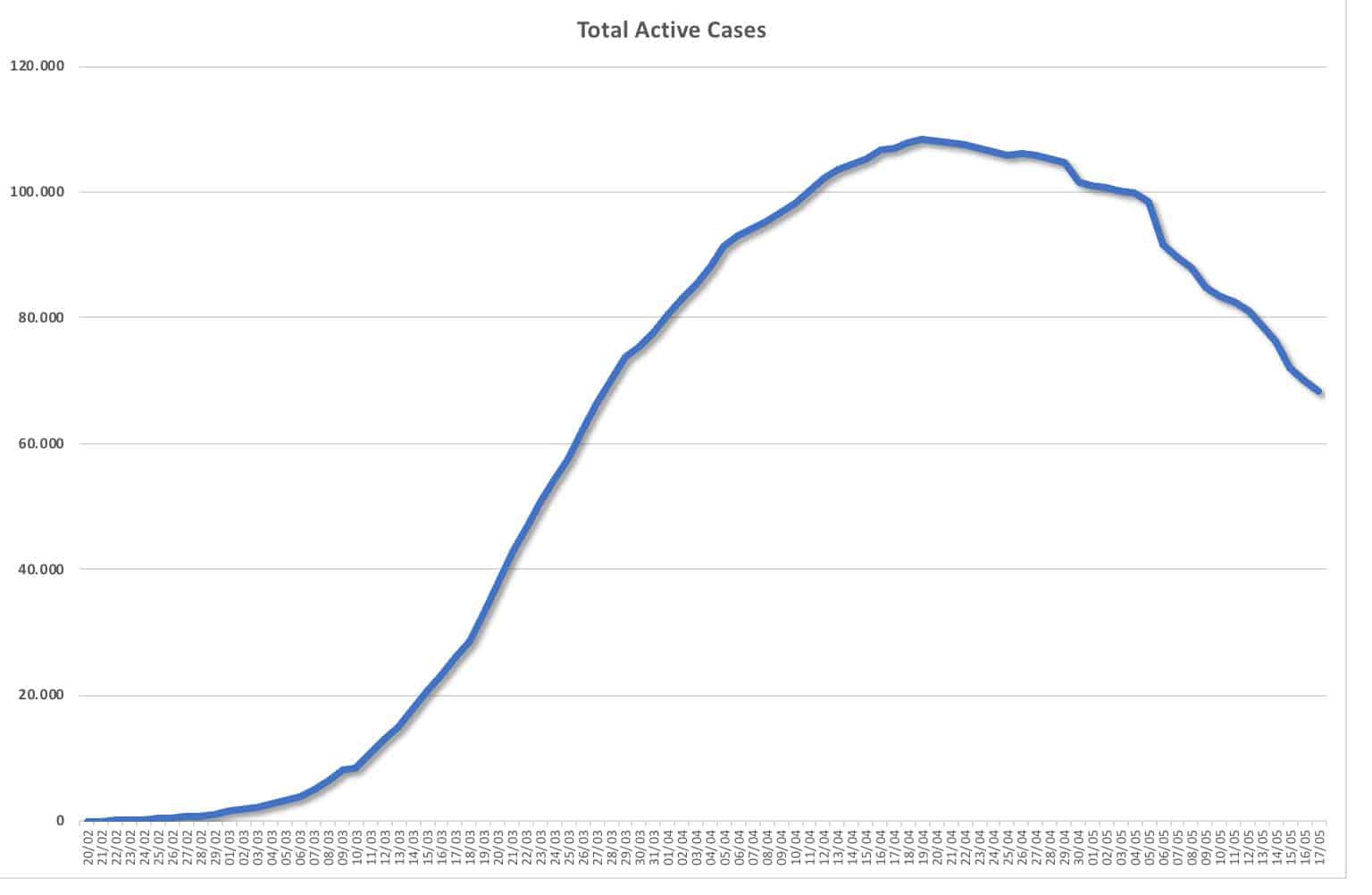 Overly cautious? Maybe. But it’s prime minister Giuseppe Conte’s intention to prevent a second wave Italian scientists have feared since the beginning. So far the numbers are encouraging. Monday Italy had only 451 new cases, the fewest since March 2. As recently as April 28, it had 2,091. Also Monday it had only 99 deaths, the first time under triple figures since the early days of the pandemic.

In the more revealing actual positives table (total cases minus deaths and recovered), Italy’s number has dropped from 100,704 to 66,553 in only 16 days. Rome’s Lazio region has been up and down recently but its percentage of daily increase in cases has been under 1 percent 11 of the last 12 days and has had only six deaths each of the last two days.

Yet newspaper reports showed 850,000 returned to work Monday and few respected social distancing on public transportation. It takes two to three weeks for the virus to show symptoms. It’s why many, such as my fellow expat friend, John, who’s 70, stayed home Monday.

Wrote John in a message: “The trouble is, nothing has changed since the start of the lockdown. The virus remains, treatments are the same and there is no vaccine. All we’ve done is extend the number of cases over a longer period of time — flattened the curve — and that was the original and sole objective.

“I have two comorbidities that make my risk profile more cautious. I’ll start going out but want to see what the world looks like in two weeks. How many new cases and deaths will society tolerate? I don’t hold it against anyone if they want to go out. I’m not ready for unfettered normality. I trust myself, not everyone else.”

My philosophy is, if I don’t allow the government to tell when I can go out, when will I? Plus, I was getting borderline maniacal in my need to taste someone else’s cooking. Marina met me inside Il Bacaro which is tastefully decorated with wine racks. Beautiful artwork depicting couples drinking wine in cozy enotecas hang on the wall. Soft jazz played over the loudspeaker.

We filled out a form declaring everything from not being in a high-risk coronavirus zone the last 14 days to not having symptoms such as fever, cough or difficulty breathing. Luckily, we did not have Plexiglas between us. That had been tested around Rome and it was impractical and made no sense, since most couples travel to restaurants together without glass between them.

The formalities were worth it. They brought out a basket of fresh bread with two bottles of different extra virgin olive oil. Then came octopus salad and the dish I’d waited 2 ½ months to eat: classic carbonara, made from wide, round schiaffoni pasta. Topped with a couple glasses of local Nero Buono red wine, it was the kind of Rome meal I dream about when I’m away too long.

Afterward we walked through empty alleys to the Pantheon, nearly void of human life. With such a small audience, the 2,000-year-old temple looked as large as St. Peter’s and as bright as a spaceship.  We walked across Rinaschimento to Piazza Navona and only about 30 people were in a site that usually takes in 1,000 or more on pleasant evenings like this one.

After more than 2 ½ months, we’re used to seeing Rome as a ghost town. Now that it has opened up, it’s a bit dreamy, too. Imagine a city as beautiful as Rome with this much to offer, culturally and gastronomically, and it’s void of tourists. No crowds. No noise. Total authenticity.

“We know Rome because of the people,” said Marina, a third-generation Roman. “They’re everywhere. Without people, it is not Rome.”

This recovery from the coronavirus (I am not so self-inflated as Trump to call it a “war”) isn’t over. Hey, I might have contracted it Monday night and be dead in three weeks. But the start of every recovery requires a step forward, however tentative.

I’m willing to take another number. Rome is always worth the wait.