Picinisco: Italy’s pipeline to Scotland is a gastro, rural wonderland only D.H. Lawrence could describe

PICINISCO, Italy – Every town in Italy has a piazza. Then there’s this village in the Apennine foothills. Piazza Ernesto Capocci is more than just Picinisco’s town square. It’s a stage for one of the best views in Southern Italy, marveled by a crowd that resembles the European Union at an aperitivo.

Even on a gray, drizzly November day I gasped at the gently sloping green hills, dotted with red-tile roofs and fields of grapes and olives, stretching to the mountains beyond. Wispy clouds hung so low over distant villages they looked like a sky of cotton candy.

In summer when people climb to this vista at 800 meters (2,625 feet), I’m told Renaissance painters couldn’t capture its beauty. These people have one thing in common besides a love for beautiful Italian sunsets and Italian country cooking.

Most have returned to a village that has been a pipeline to Scotland for nearly 150 years.

Standing in the piazza Thursday I met Cesidio Di Ciacca. While he sounds like he could be Picinisco’s mayor, or, at least, a cozy trattoria, he’s actually a retired corporate lawyer from Scotland. He is part of that Italian pipeline in which more than 60 percent of Scotland’s people with Italian heritage come from Picinisco, population 1,200, and Barga, a town in Tuscany of 10,000.

Nearby, the village of Atina fed Paris and Belgium. People from Casalattico went to Ireland. From Settefrati they went to the United States.

“This is a meeting place at the end of the road,” Di Ciacca said, scanning the view he hasn’t tired of after a million times. “It’s the most cosmopolitan place you can ever imagine.”

Marina and I came here on a freelance assignment, and we never pass up a chance to explore rural Italy, especially a town I’d never heard of. We could’ve driven the 2 ½ hours from Rome and back on the same day. But why rush when we could crash in a 96-year-old B&B with a heavenly view and eat Cabernet and blue cheese risotto?

Picinisco is halfway between Rome and Naples, in the corner where the regions of Lazio, Molise and Abruzzo all converge. Abruzzo National Park is a bike ride away. On a clear day from the top of nearby 7,382-foot (2,250 meters) Monte della Meta it’s said you can see both the Tyrrhenian and Adriatic seas.

We drove east from Rome 75 miles, through the pretty Alban Hills past Frascati and all its vineyards. We turned off the autostrada at Frosinone and headed uphill along narrow rural roads through quaint villages and manicured farmland. The roads were lined with trees sporting fall colors of orange and red and purple and gold.

This is Valle di Comino, a collection of agricultural villages that produce olives, wine, livestock and some of the best high-end Pecorino cheese in the world.

On the corner of a windy road up the hill stands Villa Inglese. It’s more of a showcase for Italian architecture than a B&B. Painted in tints of salmon and gold, the three-story Art Nouveau home has two gabled balconies and a rooftop terrace with a view of the entire breathtaking valley.

A stone gate encloses potted flowers, ferns, lavender and an olive tree with the same palm tree planted when the home was built in 1926.

Owner Ben Hirst greeted us from his balcony.  Tall and bald with a distinguished, salt-and-pepper beard, Hirst, 55, comes from a long line of English chefs. He left Wiltshire County, England, 30 years ago to explore new gastronomic adventures. He settled in Rome where he co-founded the restaurant Necci then came across Picinisco, an agricultural paradise which he said is “what I think Italian cooking should be.”

He bought Villa Inglese five years ago and opened it, as luck would have it, right before Covid hit in 2020. It opened and closed for more than a year before finally opening full time last spring.

“I love this house,” said his wife, Gaynor. “I love the feeling in this house. Everyone who comes has the same passion. The views are spectacular. I’ve traveled and this rivals anywhere.”

Villa Inglese is a direct result of Picinisco’s Scottish pipeline. Antonio Marcantonio was born in Picinisco in the late 1800s and moved to Scotland when he was a child. He grew up to own an empire of American-style ice cream parlors..

One time on his return to Picinisco, Tuscany’s Liberty-style Art Nouveau villas caught his eye. He found an architect to build a similar home here in his hometown. In 1926, Villa Inglese was born.

Marcantonio was part of the Grand Tour, the famed trans-European adventure wealthy Brits did in the late 1800s. It was also in the late 1890s when Italy, particularly in the South, was impoverished from political corruption and a failed military campaign in Africa. That’s when the first wave left Pitrinisco for Edinburgh, Scotland. At the time, Edinburgh was one of the wealthiest cities in the British Empire and Glasgow was the No. 2 city behind London. There was work aplenty and the Italians set up their own businesses, particularly ice cream such as Marcantonio’s.

As they said around here, “You can’t eat the view.”

For more than 100 years, people have returned to Picinisco to discover their roots, to see long-lost relatives and see what they all left behind.

“We’ve had people here whose families went to work in the cotton mills in the 1850s,” Gaynor said.

Then there’s Cesidio Di Ciacca who returned from Scotland and bought a village.

Di Ciacca’s says his ancestors in the village of I Ciacca, eight miles (14 kilometers) from Picinisco, date back about 500 years. Just like Leonardo Da Vinci, who’s from Vinci, Tuscany, the Di Ciaccas adopted their town’s name.

He sold his law firm in 2010 and increased his trips to this quaint little valley. I Ciacca has been emptying since 1850 and his memories of his relatives reminiscing of their village over Christmas dinner inspired him to make a bold move.

He first bought a four-story house in Picinisco which he turned into the six-bedroom Sotto Le Stelle hotel. He loved the area so much that he convinced the 140 landowners in I Ciacca to sell them their parcels. In 2013, he owned the entire village.

I asked what he liked most about Picinisco.

“Peace,” he said. “It’s a cosmopolitan village. In the summer you meet people from all over the world. D.H. Lawrence called this piazza ‘the drawing room of town.’ That was 1919.”

Considered by some as the greatest British travel writer, Lawrence discovered Picinisco during his self-imposed exile in 1919. Accused of being a German spy during World War I, he bolted Britain and toured the world, from the U.S. to Ceylon (modern-day Sri Lanka) to Australia and much of Italy in between.

Already famous for his novel, “Sons and Lovers,” in 1913, he passed through Abruzzo in December 1919 and was invited to stay in this rustic farmhouse in Picinisco by a friend, a model named Orazio Cervi. He built it in 1889, a dream home with arched doorways and wrought-iron balconies. For two winter months Lawrence stayed in an upstairs bedroom and finished his hit novel, “The Lost Girl.” It won the James Tait Black Memorial Prize for fiction in 1920 and much of Picinisco’s surroundings are found in the book.

In the novel, he referred to Picinisco as Pescocalascio and described the area in the middle chapters. While admiring the beauty, he also called it “staggeringly primitive.” As he wrote of his visit:

“You cross a great stoney river bed, then an icy river on a plank, then climb unfootable paths, while the ass struggles behind with your luggage … The house is composed on the ground floor of a kitchen more similar to a cave … We have to cook over a fire and eat our food on our knees sitting on a bench in front of a gloomy kitchen fire.”

The house, now an agriturismo dubbed Casa Lawrence, has been modernized but the rooms have been decorated in the fashion that Lawrence described in the book. I toured the house and sat at Lawrence’s desk where he finished “The Lost Girl” while staring at a wall. The rooms are large with big beds. A vintage phonograph and an ancient manual typewriter sit in one room.

Outside I could see the rolling foothills of the Apennines covered in forest. Under olive and maple trees, I sat at a picnic table with Casa Lawrence owner Loreto Pacitti. A Picinisco native, he also runs La Caciosteria di Casa Lawrence where his Pecorino Picinisco is some of the best cheese I’ve ever had.

“I was born here and I want Picinisco to survive,” he said. “I love this land and I want the land and traditions to survive. I fight for them.”

Pacitti connects visitors with winemakers, olive oil producers, pizza makers and is creating a food network “just to protect and develop the economy of Picinisco.” 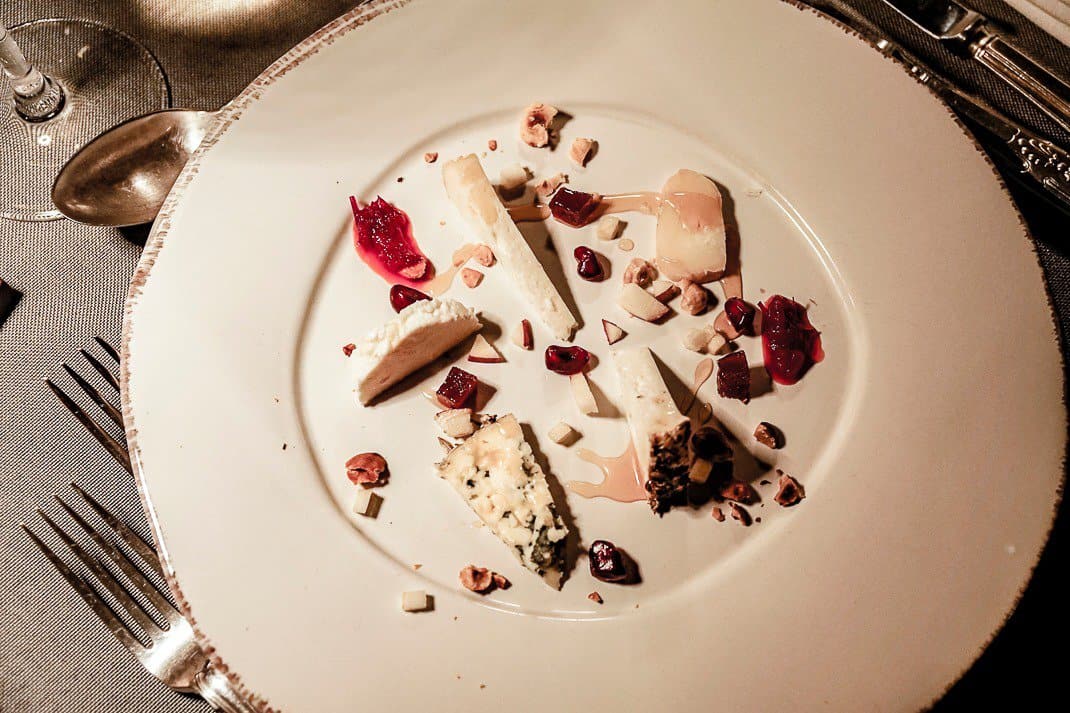 Covid leveled Picinisco as it did all of Italy’s agricultural areas. Villa Inglese opened and closed before finally opening full time last spring. Besides our comfy room with the balcony and million-dollar view, the night was worth it just for the food. As Hirst said, “The least-explored part of Italian cooking is the mountain cooking.”

To prove it, this is spread he laid out for us (by courses):

I asked Ben why he liked living here.

“It’s the food and the food culture,” he said. “You couldn’t get this in Tuscany. The butcher I go to, for example, he makes mortadella (pork sausage). He sells the mortadella to Emilia-Romagna. Emilia-Romagna is the home of mortadella but they get it from here. This whole valley is organic. I’ve never known products like this.”

In a country crammed full of dynamic scenery and equally delicious food, this little village of Picinisco still stands out. Like many Scottish who have returned over the years, I’d return here, too. I also have another reason to return besides views and food.

How to get there: Rent a car. The closest train station is at Cassino 18 miles (30 kilometers) away. Rental cars in Rome start at about €25 a day.

When to go: The valley has many food festivals. There’s an orapi (wild Italian spinach) festival in the beginning of May, a pastorizia shepherds festival in July and mushroom festival the first Saturday in October. Hottest month is August with highs in mid-80s and lows in low 60s. Coldest is late January (30-45). Our days in November were 50s and 60s.