PRAGUE — You don’t have to hate crowds to love Europe in winter. You can merely love the night. Or lights reflecting off a river. Or the warmth of hearty comfort food in a cozy 18th century restaurant. For all those reasons, I came to the Czech Republic in the middle of January. Central Europe in January is often an ice box. Temperatures in Prague last weekend were in the high 20s. Snow flurries filled the air. On the streets, a stocking cap never left my head.

Prague in winter is like curling up with your girlfriend in front of a roaring fire. It’s beautiful and romantic and oh, so warm if you find the right place. I’d been here in the summer of 2014 when the Charles Bridge had so many tourists it felt more like a mall after Thanksgiving than a 15th century European landmark. l heard as much English as Czech. I believe I saw shirts from every college in the Pac-12 Conference. The city made enough money off its “Prague Drinking Team” T-shirts to build another bridge.


Last weekend, Prague seemed homier, prettier and, despite the sub-freezing temperatures, even warmer. I walked across the Charles Bridge in early evening and had forgotten it was actually meant for foot transportation. I never ducked under any Japanese’s photo op. I didn’t stumble over any beggars. I heard a couple of the ubiquitous street musicians and again saw a large collection of cheap oil paintings of Prague Castle from every conceivable angle. But it all added to the scene rather than take away from it. The sun had long gone down. I saw building lights dance off the Vltava River. I saw Prague Castle shining through the blackness, a regal beacon above a glittering city. Lovers walked hand in hand. Photographers steadied their cameras along the bridge’s edge. Businessmen pulled their trench coats closed against the cold.

I handle extreme weather conditions very well. I lived in rain (Pacific Northwest), heat (Las Vegas), snow (Denver) and humidity (Rome). None of it affected my life. Traveling around Europe in winter fits my distaste for crowds and tourists even though I am one. I once went to Lithuania and Latvia in November. Hey, it doesn’t snow in the bars.


Prague is less than a two-hour flight from Rome and the excellent, sparkling clean subway system whisked me into the city where I had an AirBnB a block from the river. I was a 15-minute walk from the Charles Bridge. Hana, my host, represented the new, modern Czech. In her early 30s, she spoke perfect English and was the most accommodating host. Also she had virtually no recollection of communist Czechoslovakia.

“It happened when I was just a little girl,” she said.


The mix of West and East makes the old Iron Curtain countries some of my favorite destinations. Free enterprise erased most of the visible remnants of communism in Prague, kind of like a wiper cleaning dirt off a windshield. The windy streets around the Old Town Square are chock-a-block with souvenir shops, selling everything from Czech crystal to beer steins. One shop has those Russian inserted dolls, each containing four or five inside each other, representing every sports team on the planet. They ranged from soccer teams in England to football teams in the Pac-12. I saw my alma mater, the University of Oregon. I saw A.S. Roma. But they were as crudely painted as some lame efforts I saw made of the Charles Bridge.

What reminded me of Czechoslovakia were the hats. Like all East European women who sought western goods after communism fell, Czechs dress to the nines. But many also wore the cossack hats and long-eared fur hats worn for centuries. I stood in a subway with men, women and children all wearing animals on their heads. I thought I was on the set for “Doctor Zhivago.”

But then Friday night I went out with some Italian friends also visiting and saw the new Prague. In the 21st century, this city of 1.2 million is as modern and hip as Vienna or Stockholm. It’s filled with kids as westernized as in Santa Monica and London. They like their money, their beer, their women, their men. We went to a place called La Bodeguita del Medio, a Cuban bar featuring everything from cigars to gallon-sized mojitos to Latin dancing. Forty years ago, Czechoslovakia and Cuba shared a mother in Russia. Today the only thing they share is the Havana Club rum served in this bar. Big fans and huge ferns gave it a distinct feel of Havana — if Havana ever had snow. The single-serving mojitos were passable and only $6.50, mercifully cheap after the sticker shock I suffered the week before in Liechtenstein. Buff bartenders danced while shaking their rum drinks. Latin men, and women with tantalizingly high-slit dresses, demonstrated rumba dance steps on a stage. Downstairs four girls gathered around a massive Havana Club bucket of mojitos with a dozen straws sticking out of it like toothpicks in a block of cheese.

I chatted with the Cuban disc jockey, sporting shades and a ball cap worn backwards. He played Latin tunes while a flat screen played sexy music videos from the Dominican Republic. The DJ bolted Cuba eight years ago after marrying a Russian woman and lived in Russia for five years. In a scenario I so often see with American women and Italian men, “it didn’t work out.” He moved to Prague three years ago. I asked him the difference between Russians and Czechs.

“Czech people are strange,” he said in near perfect English. “Russian people are always ready to party.”


Saturday morning I wanted to see Prague from above rather than below. The sky was that steel gray you always see before a snowfall. It’s the kind of gray I always associated with Czechoslovakia. I went to what they call the Dancing Building. Built in 1996 by Czech Vlado Milunc and Canadian-American architect Frank Gehry, it’s about as far from communist-era architecture as the Eiffel Tower is from the Kremlin. It’s a building on a series of square white columns that lean under the green glass building leaning with it. The wide bottom and the columns below make it resemble a female dancer which inspired the original name “Fred and Ginger Building.”

On the top floor was the best hot chocolate I’ve ever had, rich and warm with a huge mountain of fresh whipped cream towering over the rim. With it came one of the best views in Central Europe. Prague Castle stood off in the distance above a collection of red-roofed houses leading to the green-gray river. Green onion domes stood atop towers as long river boats steamed upstream. I could only find the gray wall of communist-era life after long walks around town led me to blockish, drab apartment buildings the owners didn’t have enough money to upgrade. 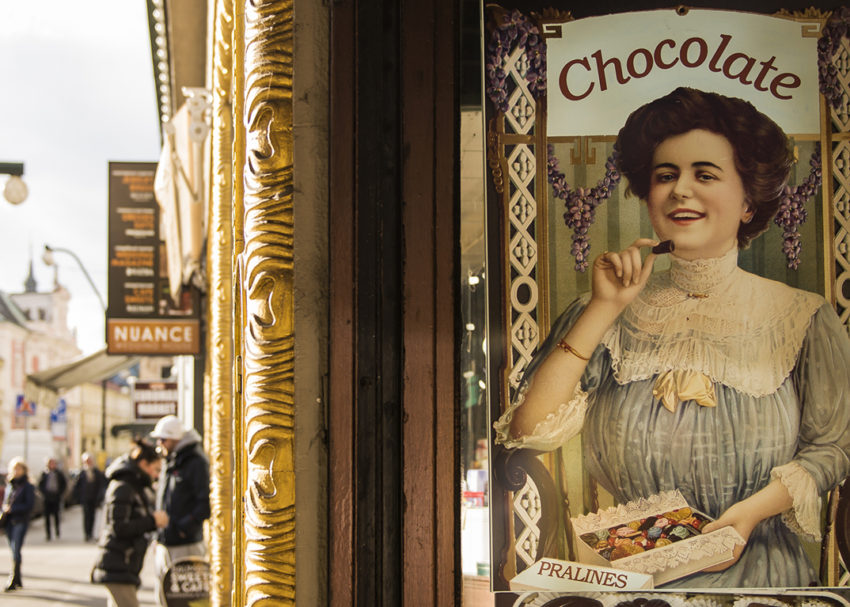 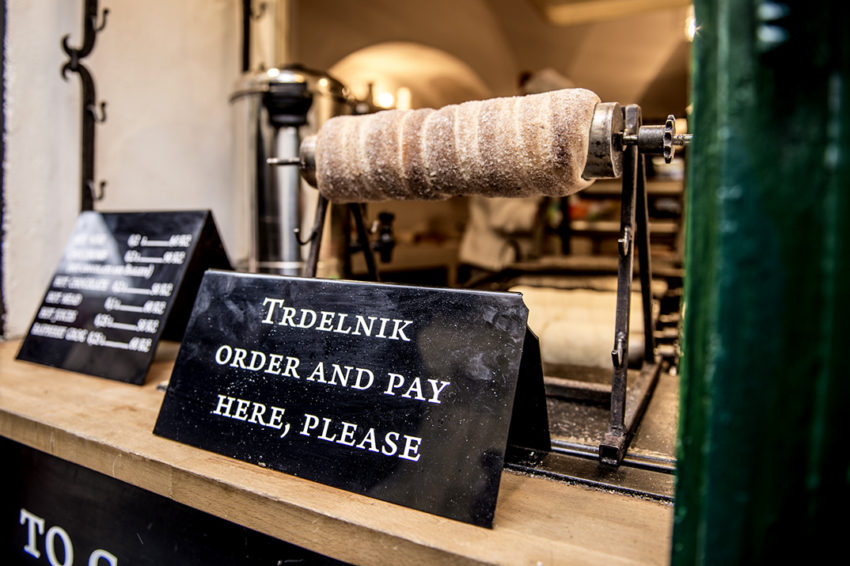 Geographically, Prague always was the most western of the East European capitals. It makes sense it has used tourism to wipe away the stain left from 41 years of communism. That night I went out to dinner with two of Prague’s many rising young talents. I met Igor and Bara two years ago while trekking in Slovakia’s High Tatras mountains. Igor, 30, is a lawyer who moved to Prague from Slovakia 10 years ago. Bara, 32, is a Czech doctor. Both are young, healthy and driven. They also love Prague with the same passion I have for Rome which has attracted tourists for 2,000 more years. They took me to a real local restaurant called U Veverky which has never even been close to making Lonely Planet’s guidebooks. Located in the bohemian neighborhood of Dejvice, U Veverky has iron chandeliers, brick floors and communist-era radios lining the shelves. A team handball game, a sport never shown in the U.S., had one bartender spellbound.

U Veverky (meaning At Squirrell’s) has all the heavy dishes associated with Czech cuisine: veprove houskove knedliky (pork bread dumplings), svickova (roast beef covered in heavy gravy with a sour cream or cranberry sauce) and, of course, bramborovy salat (potato salad). I ordered the pork ribs baked in spicy marinade with cold mango chili and cheese sauces. The slabs came out in a bucket. They didn’t have the tangy sauce I became accustomed to from America’s greatest gift to world cuisine — BBQ — but the ribs were lean and fell off the bone. With a big mug of ice-cold Pilsner Urquell, one of the most popular and trendy beers in the world, it was a great way to waddle through the rest of the night.

I asked Igor what he liked most about living in Prague. He’s been here 10 years and while Slovakia shared the same flag with Czechoslovakia for 70 years, they’re considered different. Slovakia is the nature country; Czech Republic is the culture country


“What I like is the cafes,” he said. “Some of them are so unique and you won’t find places like that anywhere in the world. You can be sitting there for hours and chatting, reading. I love also some of Prague’s cinemas. These are little cozy popcorn-less institutions with a defined community of people who like good movies.”

Igor, being Slovak, is a nature nut. The couple returned to Slovakia this past summer to hike different routes in the Tatras. He told me Prague doesn’t make him miss it.

“I love the parks and the fact that within a 30-minute train ride from the town center you could be in an actual nature, with hills and forests,” he said.


The next day, I came to another shocking realization of how far Prague had come. I went to the Museum of Communism. It is packed full of information ranging from old army uniforms to makeshift mechanics shops to anti-American propaganda posters. Standing out the most was a video from 1989, shortly before the Velvet Revolution that led to democracy that year, when police beat the daylights out of some of the 50,000 people peacefully rallying in memory of nine students executed by the Nazis in 1939. I saw burly cops beating women with bare fists, swinging clubs at students’ heads, plainclothes secret policemen tackling those who fought back. Police questioned students with blood streaming down their faces. One cop even asked for a student’s grades.

When I walked outside I went to a store selling household items as art work: cheese graters in the form of bright women’s dresses, cosmetic brushes that look like women’s hair. The bright colors and heat made me feel warm as snow continued to fall on the busy street. A long time ago, Prague came in from the cold.

But it’s a great place when it is cold.