Procida’s prison in paradise: after 150 years of jailing mafiosi, fascists, and worse

PROCIDA, Italy — I love a room with a view. Then there’s the Palazzo d’Avalos.

The residents here had views from only the most romantic of dreams. Perched high atop a cliff on the idyllic island of Procida, residents could see out onto the Bay of Naples. One of the prettiest harbors in Italy lay below their windows. The islands of Capri and Ischia teased them from a distance. The sun shines 300 days a year. The sky is as blue as a turquoise necklace. The sea is the blue of royalty.

Then again, back when this former palace had residents, a few things spoiled the view: 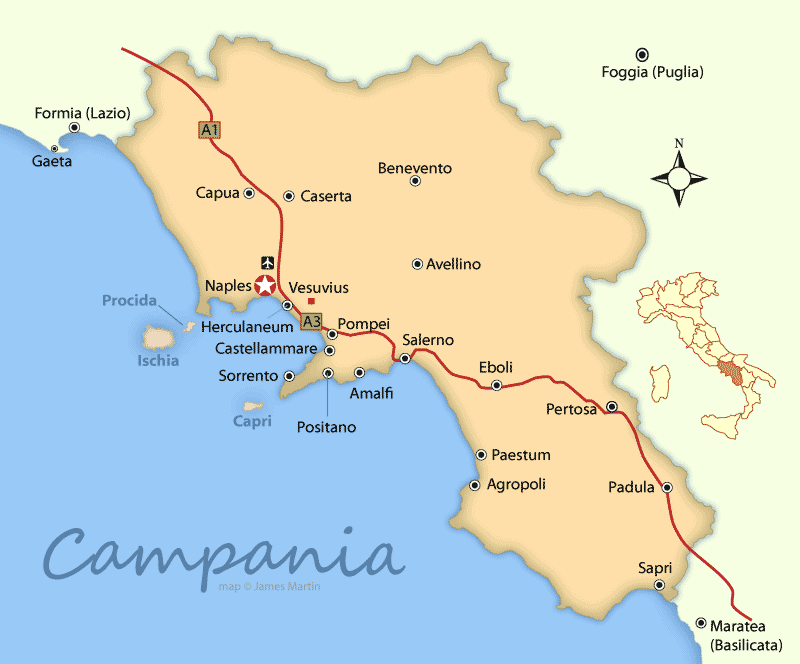 In a way they were. The Palazzo d’Avalos was an Italian gulag, a Russian prison with better weather. For more than 150 years, from 1830-1988, this one-time king’s quarters served as one of Italy’s most notorious prisons. It housed some of the mafia’s worst criminals. It was a petri dish of disease, graft and mystery. Truman Capote, on a visit to Southern Italy in the 1940s, called Procida “The prison island.”

The prison just so happens to be on my favorite island in Italy and one of my favorites in the world.

Procida (pronounced PRO-chee-da) is 1.6 square miles of pastel-painted buildings, quiet harbors, high cliffs, sandy beaches and tiny alleys twisting through an unpretentious Old Town. If you’ve never heard of Procida, don’t feel bad. It gets overshadowed by the public relations elephant that is Capri, 10 miles to the south, and trendy Ischia, 15 miles to the west.

But for me, nothing beats Procida. It’s where they filmed “Il Postino,” the love story that was nominated for an Oscar for Best Picture in 1995. The film’s setting was 1950. They used Procida because it really hasn’t changed much since then.

The Palazzo d’Avalos has. Since closing in 1988, it has become one of the most ghoulish guided tours in Europe. Marina and I came here for the first time in 2017 and noticed that the best view on the island — and one of the best in Italy — was of Marina Corricella. That view is at the top of a road right below the hulking prison that looms over the island like a giant guillotine.

With temperatures climbing into the 90s in Rome two weeks ago, we took the 70-minute train ride to Naples and the half-hour hydroplane ride to Procida for a few days. We ate seafood overlooking the sea. We drank Campania’s signature Falanghina white wine on quiet harbors. We tanned at our hotel pool overlooking the bay. We swam in the sea.

We also explored this giant contradiction hovering over us every day. I find it hard to wrap my mind around a vicious prison on a beautiful island. It’s like splashing a runway model with tomato sauce. But I get it. I know why they do it. Prisoners can escape the prison but can they swim to safety? No wonder some of the world’s most infamous prisons have been on islands. Alcatraz off San Francisco. Devil’s Island off French Guiana. Robben Island off South Africa. They had great views, too.

I remember in 1997 going to Ilha Grande, a beautiful island ringed by sandy beaches about 90 miles south of Rio de Janeiro. It had this wonderful infrastructure, with hotels of every range, good restaurants, fun beach bars. It had few tourists. Why?

It housed a federal prison, Candido Mendes, until 1994.

Candido Mendes housed some of the most vicious gangs in Brazil. What was Palazzo d’Avalos like? What famous names from Italy’s famous criminal and military past spent their worst days here, staring at the sea and wondering where it all went wrong?

I asked some locals and found the doctor who worked in the prison for 25 years. From 1963-88, Giacomo Rettagio served the medical needs of prisoners, ranging from fascists under the Mussolini regime to notorious mafiosi. Born and raised in Procida and educated as an anesthesiologist in Naples, Rettagio is a pseudo historian/public relations wiz for the entire island of Procida.

Marina and I found him on a quiet, narrow street lined with grapefruit trees near the long beach on the northwest end of the island. Now 83 and in excellent health, he lives with his wife, Anna Maria, in a single-story house with a big garden. He has written 13 books.

Trim, bespectacled and easy to smile, Rettagio evoked only good memories of his quarter century in the prison. On a pleasant day in the low 80s, we talked for almost an hour about what they call “an island on an island.”

He remembers going into cells with up to 40 people living together for years. Every evening, someone brought a big bucket every prisoner used to relieve himself. It was carted off and dumped on the grass below. He became the prison’s very own one-man center for disease control.

“There was typhoid, tuberculosis,” he said. “The bathroom was disgusting.”

Yet this palace once housed a king.

The prison’s history mirrors much of Italy’s star-crossed, violent past. The 195,000-square-foot complex was built on the orders of the Cardinal d’Aragona in 1563 as a defense for the ruling Spanish and as his own residence. From below on the harbor, looking up it appears like the most formidable fortress in Italy with a four-story wall facing the sea.

When the Bourbons took over from the Holy Roman Empire in 1734, it became the Bourbons’ royal palace and hunting lodge in 1738. It later became a Bourbon military school in 1818 and in 1830 the Bourbons’ penitentiary. The prison held convicts until 1988 when it closed for economic and hygiene reasons.

In the 1970s and 1980s the prison welcomed a steady stream of tenants from the Italian mafia. Specifically, the Camorra crime syndicate supplied a generous roster of mob bosses, hit men and loyal lieutenants. Some of them included:

In the 1970s, the Camorra crime syndicate was ruthless and ran Campania with an iron fist. It barely slowed down with the imprisonment of their bosses who still did business behind Procida’s prison walls.They recruited prisoners to help carry out their wishes once freed into the world.

“They were very nice and very proper,” he said. “For example, Frank Mannino was very nice. Gigino Giuliano, the head of the Nuova Camorra Organizatta, made me coffee and sent it to me every evening.”

One time in the ‘70s after Giuliano had been freed, much to Retaggio’s surprise, Giuliano returned to the island. This time he arrived on a big boat with friends and a beautiful woman on his arm.

When World War II ended in 1945, Retaggio said 22 of Mussolini’s fascists ended up in Procida’s prison. Some wound up getting shipped to Naples and shot. Retaggio remembers back on them with sympathy.

“They were young,” he said. “They were innocent. They didn’t do anything.”

The next morning Marina and I trekked up the hill we’ve taken many times and took the prison tour. It’s hard to grasp well-heeled mafiosi living in squalor until you get inside the prison walls. That’s where you can picture them mixed in with common thieves, petty crooks and other murderers.

The entrance is two decaying Greek columns bookending a rusted gate under a small statue of the Virgin Mary and the words “ISTITUTO di PENA (PENALTY INSTITUTE).” It looks like a post-apocalyptic gate to hell.

The walls are crumbling, yellowed concrete, pockmarked with windows that look like black eyes from a raging fire. But instead they look out to the marina below and the bay beyond, prime real estate if you can overlook the past tenants and two centuries of filth.

The view from inside the walls is like an optical illusion where one side of the world reflects its opposite on the other side. We gathered with 10 other tourists (reflecting Italy’s travel restrictions on other nations, all were Italians) in the courtyard inside the prison entrance.

The guide gave a brief history of the prison and included something I never read before: Officials brought in cats from the mainland to solve the growing problem with rats. That explains why Marina and I spent about an hour before the tour feeding three cuddly, lovely strays that hang outside the prison walls.

The prison is four stories high but only two stories are above ground. The first two are special cells for the truly deplorable. The guide’s description reminded me of the prison in Venice’s St. Mark’s. A bridge leads to its subterranean hellhole and the walk is the last time the prisoner sees Venice’s beautiful lagoon. It’s why they call it the Bridge of Sighs.

Some of the first rooms held the 30-40 prisoners. Single beds still line the floor. It reminded me of my old fraternity sleeping porch except not as dirty. On the far wall was a barred window where the prisoner could see out to the beautiful blue bay below, however longingly.

We passed Retaggio’s old doctor’s office. The desk and a small printing press remain. I looked out his window just as a white sailboat, its sail billowing in the mild breeze, cruised past my view.

The hallways are wide with vaulted ceilings. It almost feels like a church, which you can still find on the upper floor. It’s a small room but enough to hold a dozen condemned worshippers and a crumbling religious fresco remains on the wall. One room had nothing but a big pile of prison shoes.

One more flight brought us to the roof. It must be the highest point on Procida and is one of the most spectacular vistas on the Mediterannean. It’s a panoramic view of the entire Bay of Naples. Not only can we see the harbor below, but the village, the port and the residences in between. Beyond Capri and Ischia we can see all of the Amalfi Coast. It was truly breathtaking.

So was the huge dropoff over the unprotected ledge. The guide said prisoners weren’t allowed up here but I can imagine some overzealous guide gave some of the more annoying prisoners a nice last view of earth before tossing him over the side.

The prison’s presence doesn’t take away any of Procida’s appeal for us. We even inquired about rental property for a future summer. What better way to while away an Italian summer day than sitting at a dockside cafe, drinking a glass of wine or eating a Neapolitan-style pizza in a piazza overlooking the sea.

And we can always look up from wherever we are and see the palace turned prison and the prisoners who came to paradise and found hell instead.

How to get there: Numerous trains leave all day from Rome to Naples, 70 minutes, about 60 euros round trip. Italo (www.italotreno.it) is cheapest company if ticket bought a couple weeks in advance. From Napoli Centrale, a 13-euro cab ride takes you to Naples’ port where a ferry to Procida is 17 euros per person round trip.