Rabbit: It’s what’s for dinner in the island nation of Malta

(This is the last of a three-part blog on Malta.)

MGARR, Malta – On the cute scale, rabbits rank up there with frisky kittens covered in yarn and baby penguins walking on snow. So what am I doing staring down at my bowl of fried rabbit parts with two cute, furry, white bunny rabbits staring at me from a wall poster?

The Maltese are rabid about rabbit. Called fenek in Maltese, the average Maltese eats three kilograms (6 ½ pounds) of rabbit a year compared to .1 kilo (quarter pound) in the rest of the European Union. The next biggest consumers are the Spanish and Portuguese at 1-1.5 kilo (2.2-3.3 pounds). Yet Malta also has a soft heart for these bouncy little creatures. (Those of you cringing about this blog topic, read on. It has a happy ending.)

During five days in this island nation just 60 miles south of Sicily I contributed my share to the rabbit economy. It’s easy to do. Nearly every restaurant in this country that’s 27 kilometers (17 miles) long serves rabbit. Fourteen restaurants specialize in it with names such as Down the Rabbit Hole, The Fat Rabbit and The Black Rabbit.

Two cities even specialize in rabbit restaurants. One is Bahrija, near the west coast 20 kilometers (12 miles) from the capital of Valletta. I’m in the other one. Mgarr (pronounced mm-JARR and not to be confused with the Mgarr that’s the main port of Gozo, Malta’s smaller sister island)) is six kilometers (3.6 miles) to the north.

We saw its famous Church of the Assumption, called the Egg Church as it was built over a 34-year period off the sale of some 300,000 local eggs. We were more interested across the street where three rabbit restaurants sit on opposite corners, like Starbucks in an American suburb.

Ta’ L-Ingliz (Of the English in Maltese) is a rustic, cozy, stone restaurant with polished wood tables and chairs. We took a table outside on a glorious 72-degree night with our friend, Paul Fleri Soler, and his girlfriend, Maria Gomez Blanco. We met Paul in Naples five years ago and he promised us a peek inside authentic Maltese culture.

“It’s tradition to eat rabbit on Sunday,” he said. “My colleague eats it every Friday evening.”

Ta’ L-Ingliz offers rabbit dishes mostly cooked in the traditional way: fried in garlic. You can also get it fried in wine and garlic, and Ta’ L-Ingliz has rabbit in four offerings: portion rabbit, whole rabbit, spaghetti with rabbit sauce and mixed platter (along with horse meat and quails).

Paul strongly suggested the traditional and out came a big pile of meaty little rabbit parts. They looked like chicken wings but tasted better, with less grease and more meat. It was quite delicious and void of much fat. Turns out, rabbit is as healthy as it tastes. According to Livestrong.com, a 3-ounce piece of rabbit has only 96 calories, 18 grams of protein, less than 2 grams of fat and no carbohydrates.

Meanwhile, a congregation of wild cats had gathered near our table. They crossed the busy street while dodging cars like soccer strikers to look up at us with seductive (read: hungry) eyes. We threw a few scraps to them while our waitress brought us very underrated local Chardonnay and Merlot wine.

Her sister, Jalisse Micallef, works in the kitchen with their father, Godwin, the owner. She told me they go through about 700 rabbits a month, and she eats it nearly every day. Some regular customers only come for the rabbit although they also serve spaghetti, chicken, seafood and beef.

I also had rabbit on my first night in Malta. I took Paul’s tip and went to Ta’ Kolina, about five minutes from my hotel in Sliema across the street from the Mediterranean Sea. I ordered rabbit in wine and tomato sauce and infused with herbs. It was four big, meaty pieces of rabbit in a rich gravy topped with greens.

The country’s rabbit ritual will reach a peak Wednesday. That’s the traditional Feast of St. Peter and Paul, a national holiday where everyone has spaghetti with rabbit in a festival called L’Imnorja, or Festival of Light in Maltese. It’s named for the bonfires used to light up Mdina, Malta’s original capital, and neighboring city Rabat in celebrating the martyrdom of the two apostles.

It has been celebrated by Roman Catholics since the 3rd century A.D. It’s celebrated every June 29 in Rome, too. However, only in Malta is rabbit the main dish. In fact, at one time in Malta it was written in marriage contracts that the man must take his wife to an L’Imnorja before they could marry.

In fact, rabbits go back even further than Roman times. The Phoenicians brought rabbits to Malta in about 1,400 B.C. to ensure they had fresh meat halfway between their journeys back and forth from Spain. The Romans, meanwhile, believed rabbit meat enhanced a woman’s beauty which may explain the plethora of pretty women on the island today.

Then rabbits became a controversy. Under Norman rule in the 11th-16th centuries, they banned peasants from eating rabbit to preserve the creatures – and very easy targets – for their hunts. It seemed silly since rabbits were breeding like … well, rabbits. The rabbits further pissed off the hungry peasants by eating their crops.

When the Knights of St. John took over Malta in the 16th century, they punished locals for eating food the rabbits ate. In 1773, people revolted and three years later, they were allowed to eat rabbit and could hunt them in their private territories.

Now about that poster … 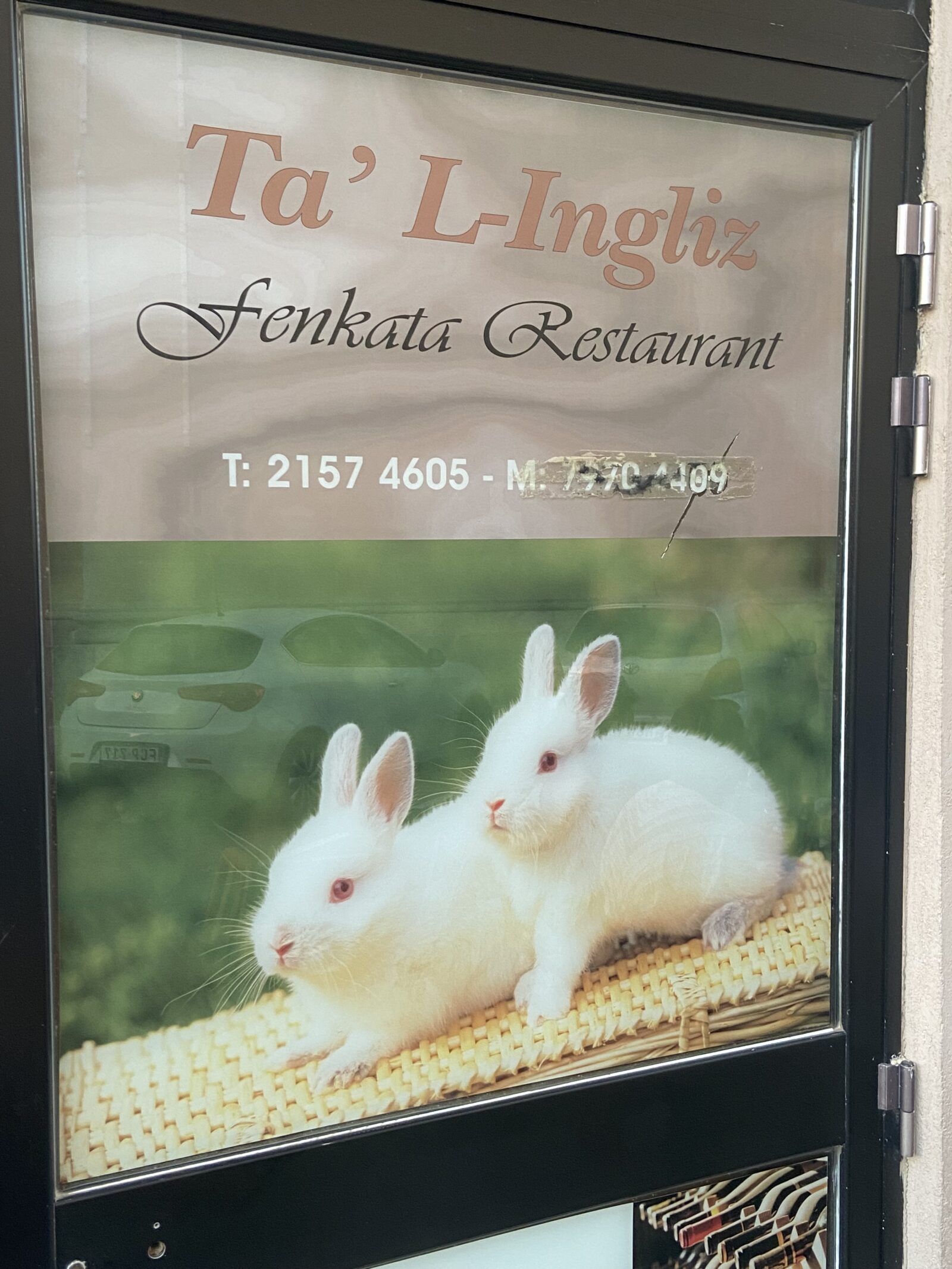 I’ve already had readers warn me they will not read this blog. Rabbits are just too cute. They are. You rabbit lovers who’ve read this far should probably skip the next two paragraphs.

In 2016, Malta slaughtered 550,000 rabbits, according to EuromeatNews.com. A half million were killed in backyard farms and the other 50,000 in slaughterhouses. That’s more than killed in 17 EU countries. Only 100,000 are killed in the United Kingdom. (Ta’ L=Ingliz gets its rabbits from Sicily where they say the rabbit’s food is better.)

How are they killed?

Their necks are broken. Some places hit them in the back of the head.

I asked Jalisse what she says when people ask how they can eat such cute creatures.

“We have a lot of customers that say they don’t like rabbit because they have pets,” she said. “Then choose something else.” 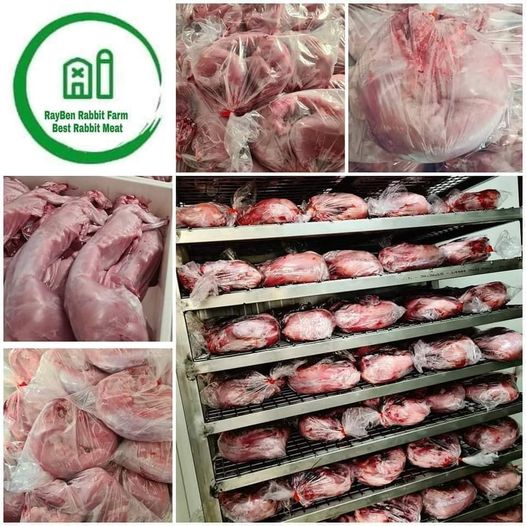 Yes, I’ve often exhaled an “AHHHHH” when seeing a bunny rabbit nibble on a flower. But I also inhaled rabbit at that restaurant. I ate dog in China once. I felt no guilt.

Food is tied with culture. One man’s delicacy is another man’s taboo. Do you eat meat? Hindus feel cows are sacred. Do you eat pork? Muslims think they’re dirty. Who’s right?

I believe in survival of the fittest. Man developed through eating the surrounding wildlife. I lived in Colorado for 23 years and if the locals didn’t cull the deer population there’d be herds stampeding down Denver’s 16th Street Mall.

My concern is the extermination of species. Buffalo were near extinction at the turn of the 20th century. Through careful conservation, the City of Denver reports 500,000 buffaloes are alive and well in North America – and taste very good between a hamburger bun with BBQ sauce. It can be found in restaurants all over Colorado.

Also, vegetarians don’t bother me until they bother me. I don’t appreciate it when one of them tells me in a restaurant, “Do you know how much that animal suffered so you can eat it?” which has happened. Almost 9 percent of the world’s population is undernourished, according to World Against Hunger. I’ve been to some of those countries. Who are we to tell any of those people they can’t eat a chicken?

However, I do appreciate organizations that exist for the fair treatment of said animals. The Malta Rabbit Club has been around since 1963. It’s an NGA run by volunteers and is involved with everything good about rabbit welfare: pet therapy, home breeding, education, upkeep, environment. Its biggest responsibility is to develop the hobby and welfare of rabbits through research.

It works with government agencies such as the Ministry of Education and promotes community work through the Corporate Responsibility Scheme. They refurbish the Rabbit Zoo at the Petting Farm in Ta’Qali in the middle of the island and use rabbits to help with autistic and Down Syndrome children. The volunteers often appear on Malta TV.

Also, in May Malta’s Ministry of Agriculture announced it is gathering data and opinions for a National Animal Welfare Strategy. It will review current conditions for animals, to improve conditions and promote public awareness, among other initiatives.

Yes, rabbits do have friends in Malta. They are loved in more ways than one.

Do you want to go?

How do I get there? Air Malta has direct flights from 18 major European cities, including four in Italy. I paid 91 euros round trip for the 90-minute flight from Rome.

Where should I stay? Diplomat Hotel, 173 Tower Rd., Sliema, 356-2134-5361. Home (diplomat.com.mt). Across street from sea with rooftop pool and bar. Excellent buffet breakfast included and knowledgeable staff. I paid 81 euros a night for four nights. Prices start at 120 a night in July.

When should I go? May, June and October. July to September is too hot, crowded and expensive. Highs in August hit 90 with high humidity. June is 83, October 77. But if you want the ultimate rabbit experience, L’Imnorja rabbit feast is every June 29. January has high of 60 with most rain.

Is there more information? www.visitmalta.com. www.visitgozo.com. Tourist offices are near the Valletta bus station and airport and ferry terminal in Mgarr on Gozo.