Three things you probably didn’t know about Raffaello Sanzio, known outside Italy as Raphael and part of the trifecta of Italian Renaissance painters:

For those of you who can’t travel to Italy, home to an estimated 40-70 percent of the world’s art, you can only do museum tours on the Internet. It’s great to look at art while in your pajamas but virtual tours can’t give you the detail of up close and personal to the real thing.

Living in Rome these days has its advantages. Our lockdown is over and we are free to travel anywhere a plane is willing to carry us. Also, museums opened last month and I can turn off my computer, hop a bus and see the greatest artists in history.

Headlining in Rome this summer until Aug. 30 is a Raphael exhibition. It features a few dozen works of the man who forms the third spoke of Italy’s Renaissance triad along with Michelangelo and Leonardo da Vinci. Caravaggio is my favorite artist, a rock star and rebel in his day who, like Raphael, died way too young and from curious circumstances. Caravaggio came 84 years after Raphael when the Renaissance slid into the baroque period.

However, I first became a huge Raphael fan in 2005 when I visited his childhood home in Urbino. One of the most underrated romantic cities in Italy, Urbino is a walled hill town in Le Marche, the region just east of Tuscany. Unlike Michelangelo, who grew up poor with his nanny and husband, a stone cutter, Raphael grew up wealthy. He was orphaned at 11. His mother died when he was seven and his father died four years later. But his father  was the painter for the Duke of Urbino and handed his talent and interest to his son, who was raised by his lone paternal uncle, a priest.

The 15th century house in Urbino illustrates his family’s prominence. It is massive. Just down the street from Urbino’s main Piazza di San Francesco, the house is three stories filled with expensive furniture. Some of Raphael’s early work hang on the walls as do copies of his most famous pieces.

When Raphael’s works came to Rome, it went on my list of post-lockdown activities. My girlfriend, Marina, is a third-generation Roman who is part of Italy’s masses who grew up on art. She said her class went to museums about once a month. In the U.S., I grew up learning about Mickey Mantle; Marina grew up learning about Raphael.

Now look at me. After 6 ½ years in Rome, I couldn’t name three players on a single major league roster. But I know Raphael’s greatest works of art.

His top one, “The School of Athens,” isn’t in the exhibition. It’s a 16-foot by 25-foot fresco that illustrates dozens of Greek philosophers, mathematicians and scientists and adorns a wall in the Vatican’s Apostolic Palace. But we saw some of his greatest pieces during an hour-long tour that adhered to Italy’s highly successful coronavirus rules.

It’s held at the Scuderie del Quirinale, a massive exhibition hall opposite the Quirinale Palace which houses the president of the Italian Republic. Built in 1732, the Scuderie has held exhibitions ranging from Rembrandt to pop art and few museums in Italy have a more beautiful setting. The Scuderie and palace are on Piazza del Quirinale which sits on Quirinal Hill, the highest of the Seven Hills of Rome.

Marina and I showed up at 8:30 p.m., 15 minutes before sunset. We stood at the retaining wall and watched the fiery sun set behind Rome’s centuries old buildings down below. This was life imitating art. Soon we’d see art as it has rarely been seen since.

Normally, art exhibitions of the grand masters draw huge crowds in Rome. However, Italy is only allowing citizens from European countries. That group does not include the U.S., Russia or the big East Asian countries, all of which contribute a huge chunk of Italy’s tourism. Our tour Saturday was small. I was the only non-Italian in the group. I felt safe and at home.

The museum had strict coronavirus rules: Everyone needed reservations. We all went in shifts. No mask, no entrance. Each group had about 10 people and entered in 10-minute intervals. They took our temperature as we entered. Anything over 37.5 Celsius (99.5 Fahrenheit) and you’re back on the piazza. After about 10 minutes in each room, a bell sounded, ushering us into the next room with the next group coming in behind us.

No one complained. No one took off their mask. Everyone saw what we wanted, one reason our lives are back to normal here and the U.S. is in its own self-contained bubble of hell.

Raphael’s ascent to the upper echelon into the rock stars of the time was supersonic. His talents took him to Florence and by 1504 when he was only 21 he was one of the most sought after artists in the epicenter of Renaissance art. He caught the eye of Pope Julius II who had hired Michelangelo to paint the ceiling of the Sistine Chapel and brought Raphael to Rome in 1508.

Raphael became famous for his Madonnas and Child paintings. Considering the plethora of that subject during the Renaissance, that’s like being the best striker

in Italian soccer. Next to one of his most famous Madonnas and Child is the drawing, or “cartoon,” Raphael made to base the painting.

I learned a lot about Raphael in Urbino and in Ross King’s terrific book, “Michelangelo and the Pope’s Ceiling.” However, nowhere did I read about Raphael’s interest in unicorns. In “Young Woman with Unicorn,” Raphael painted a dour blonde woman in her late teens with a content, small unicorn curled up on her lap. The bilingual description, which accompanies every piece, explained that the woman originally held a dog, a symbol of fidelity. But x-rays show that Raphael changed the dog to a unicorn, symbolizing virgin purity.

One of his three most famous paintings is the one you see advertising every Raphael exhibition in the world. His self-portrait, painted in 1506 when he was only 23, shows him with long, thick, brown hair down to his shoulders and a black hat. His sideways look with his chin tilted up and sad eyes belie his fame and status along the side of Michelangelo and Da Vinci.

I’m not religious but the role it played in the Renaissance reflects the role religion played in Italian society. Madonnas get old for me. They rarely change and after a while it’s like looking at stop lights. However, one of my favorite pieces in the exhibition is from Raphael’s early years in Rome. His Madonna and child are in the Italian countryside. With rocky hills as a backdrop, in Madonna’s lap leans her child accepting a crucifix from John the Baptist, just slightly older. The look of resignation on their faces makes them appear as if they have already accepted the child’s future fate.

Unlike Michelangelo, who never used female models, even for female figures, Raphael became famous for his female portraits. This exhibition has his two most famous. “La Fornarina” and “La Velata” face each other in one room. Painted in 1512-13 and 1519-20, respectively, Raphael was at his height of fame. The latter was finished shortly before he died.

As anyone who saw Raphael traipse around Rome in the early 16th century, Raphael knew female beauty. It’s depicted in his portraits of women who portray features that would be cherished today. “La Velata” was Raphael’s mistress and model, Margherita Luti. Raphael depicts her with a modest expression but with a knowing smile and elegant jewelry 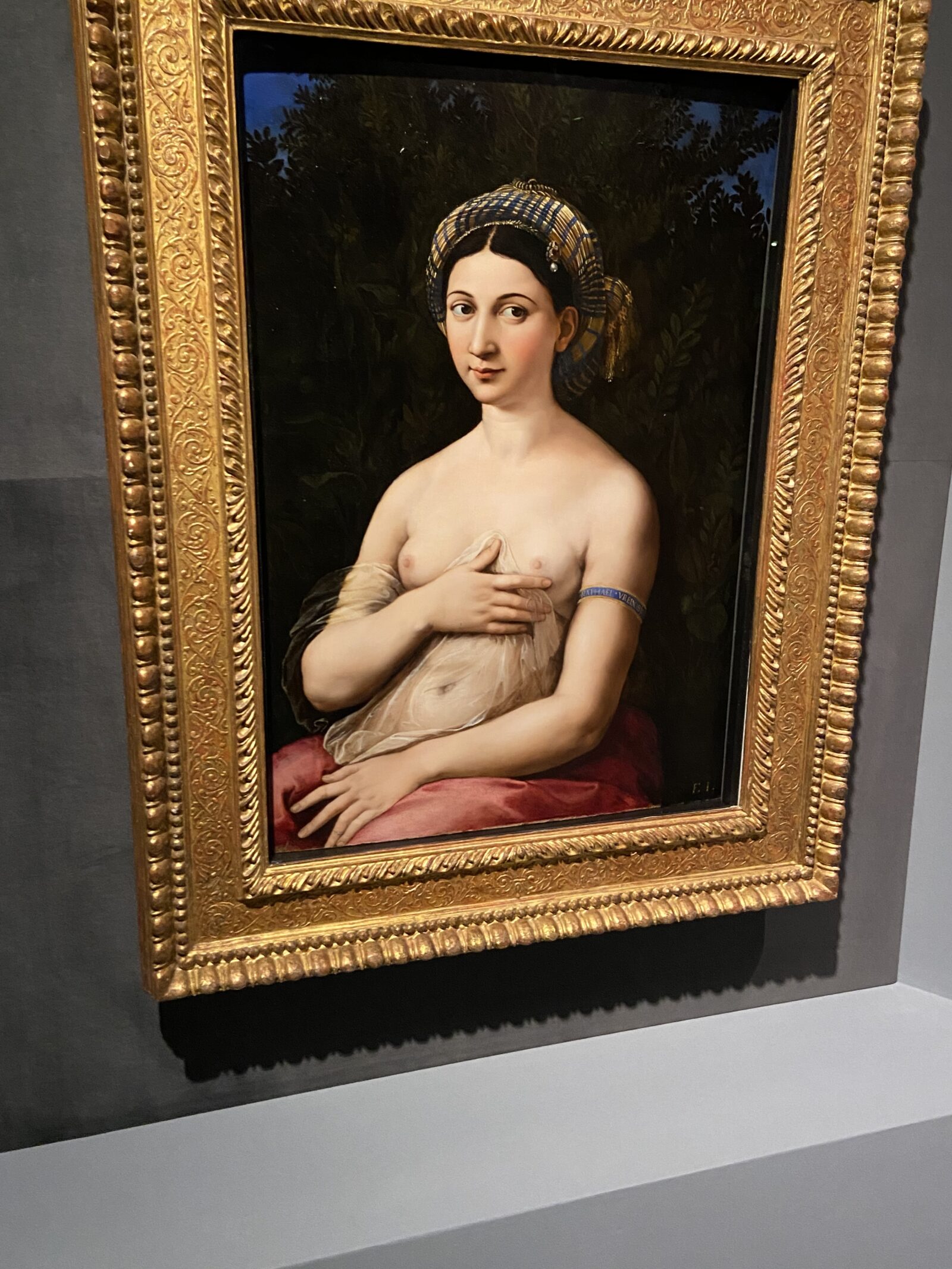 The partially nude woman in “La Fornarina” isn’t identified but a rumor that has lasted to this day claims she was Luti’s sister. Either way, the two portraits contrast Raphael’s different views of subtle seduction.

Raphael’s genius was his versatility. Besides his fame as a painter, he was also an architect who designed part of St. Peter’s (before the plans were destroyed after his death to make way for Michelangelo’s ideas) and also designed tapestries. One on display is from the 10 Vatican tapestries Pope Leo X gave him in a 1515 commission. Raphael drew “cartoons” and then shipped them to Belgium  to be made. These tapestries put him on the par with the great fresco artists who decorated the Sistine Chapel, such as Michelangelo.

The exhibition collected Raphael’s works from all over Europe. The French royal family contributed a portrait of Castiglione which it has possessed since the 17th century. Baldassare Castiglione, an Italian diplomat and famous Renaissance author, is looking noble and regal yet kind, dressed in winter clothes and a large turban.

We were in and out of the exhibit in about an hour, just enough time to soak up Raphael’s genius without getting arted out as so often happens in the Vatican Museums.

Next on my post-pandemic to-see list is Capitoline Museum until Sept. 13:  Caravaggio.