Retired in Rome Journal: A room with a view — my new penthouse apartment 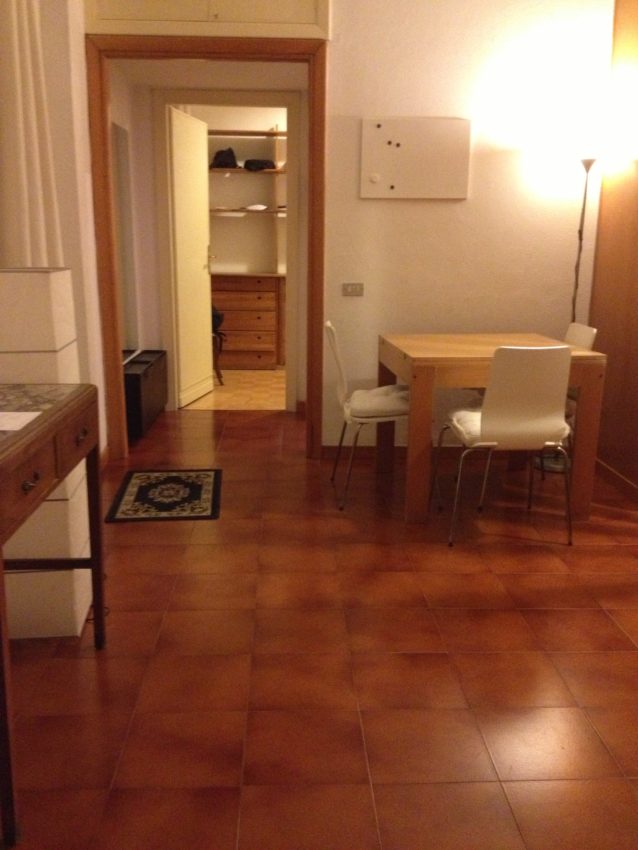 I woke up this morning feeling like Julius Caesar after he conquered Gaul.

I wondered if he ever got up from bed, walked a few feet and looked down from his lofty perch at the raging Tiber River? I did. Did he gaze at Romans passing below him? I did. And I know one thing. Caesar never looked out and saw the gleaming white mountain of marble that is the Monumento Vittorio Emanuele.

I have found a new home, a new home in Rome. My dream apartment pales in comparison to what I eventually found. What do you do when reality surpasses your dreams? Here’s what I did: I got out of bed, opened my glass door and walked out on to a 350-square-foot terrace overlooking the Tiber. At my penthouse balcony five floors up, I could see joggers chugging up Lungotevere, the long street that snakes up the river from Centro Storico in the heart of the city to Rome’s gritty southern edge. If I cut down a couple of trees, I could see St. Peter’s Basilica. I asked my new landlady where I could find a chainsaw in Rome.

To find a flat like this for only 900 euros ($1,250), in a historic neighborhood like Testaccio, is usually the work of United Nations executives or girlfriends with heavy leanings toward rich Italian men. I am neither, which made my find astonish a few of my local friends.

Gorgeous is right. Three nights in the place, and I’m still a little stunned, like an unemployed Cleveland iron worker who goes to Vegas and hits a slot jackpot of $3 million.

When I first hatched this crazy idea of retiring to Rome, I imagined what roommates I’d eventually have. Would they be filthy? Foxy? Fancy? I knew I’d need one. Since the arrival of the euro in January 2002, Rome rents have gone through the stratosphere. According to the Global Property Guide, it’s the fifth highest in Western Europe. When I left Rome the first time in March 2003, rent for my 700-square-foot flat in Prati, near the Vatican, was ready to jump from $1,000 to $1,300. In today’s exchange rate, that’s about 750 euros to 940. Split between my then-girlfriend and I, $1,000 was pretty reasonable.

As I researched apartments in my return I learned $1,000 today will get me a closet or an attic in some Fiat mechanic’s basement.

Sharing an apartment? That’s totally different. Looking on Craig’s List in my Denver condo, I saw rooms in nice apartments in good Roman neighborhoods for 500-700 euro ($695-$975). I budgeted 850 euros a month for housing. I could do this. The question was, how would I put up with the Italian roommate who kept speaking English to me or the one with the obnoxious girlfriend or the one who’d hit on my girlfriend? Except for two live-in girlfriends totalling 3 ½ years, I’ve lived alone since 1979. This is not the time in my life to change habits. But I knew it would be good for my Italian. I’m sure I’d very quickly learn how to say, “Touch my girlfriend again and they’ll call you Lefty.”

I started my search by contacting Property International. It’s a high-end rental agency run by some British ladies. In 2001 my ex and I used them to land the gorgeous apartment near the Vatican. They’re professional, fast and really connected. They don’t deal anything less than one-year rentals and told me to contact them after my two-month lease in Centro Storico expired.

I called them last month and they hit a home run with the first pitch.

The three most important factors in a person’s happiness is his job, his love life and his home. The most important factor in a home is location. Location. Location. Location. It’s the realtor’s mantra and one I’ve chanted ever since I left home at 18. Carol, from Property International, met me in front of a tall, clean building in Testaccio, a neighborhood that had always intrigued me. During the Roman Empire, it was used as a port for goods shipped upriver. They were stored in terracotta pots which were emptied and dumped into a big pile that turned into a small mountain that remains today. Testaccio gets its name from “testae,” the Latin word for terracotta. In the first half of the 20th century, Testaccio was the workers’ quarters. Slaughter houses dotted the neighborhood and many of the workers were paid with food instead of money. Because it was a poor neighborhood, some of the trattorias have remained to provide the truest traditional Roman fare in the city with few tourists to spoil the atmosphere or prices.

It just so happens I started apartment hunting at the crossroads where Testaccio has become trendy and apartment prices in Rome are plummeting.

After I walked up the 80 steps to the apartment, I thought it was lovely. The flat itself is about 500 square feet with a sizeable kitchen, overstuffed couch, roomy bedroom, a walk-in closet and a shower that, unlike most Rome apartments, doesn’t make you feel like a mummy when you’re maneuvering inside a claustrophobic shower curtain. But when Carol opened the glass door and opened up the shutters, not only did I see the spectacular view of the Tiber and trendy Trastevere neighborhood across the way, but I saw two huge words.

The orange-tiled terrace is lined with plants my landlady, Michela, has raised since seedlings. I could see the trees that line the river and hear the water gushing downstream. OK, OK. The Tiber isn’t exactly the Seine and Trastevere isn’t exactly the Upper East Side. I kind of wondered how it would go over if I told a woman, “When was the last time you had a man cook you a romantic dinner over a filthy river?” But at this end of the city the Tiber isn’t too disgusting and Trastevere beats staring at the lone window I could see across my narrow alley in Centro Storico.

My ex taught me a rule about apartment hunting. Never take the first one you see. So I told Michela and Carol I’d think about it. In the meantime, I saw one other flat. It was a split level, 350-square-foot apartment near the Spanish Steps so small my head hit the ceiling when I stood in the middle of the upstairs bedroom. I had to duck under the door frame to reach the bathroom. I knew that would be problematic at 3 in the morning after two bottles of wine.

Marika, my landlady in Centro Storico, sent me reams of Internet links to available apartments in Rome, all ranging from 800-1,000 euros. I made a few calls. One was in a basement. Another was in an attic. One looked like a training camp for vandals. I arranged to see one studio in Garbatella, this working-class neighborhood south of the train station, and the owner never bothered to show up.

I called Carol and said sign me up. I’m moving to Testaccio. Not so fast. Michela, who hadn’t had an offer on the flat for months, suddenly had another. Two students wanted the place and were offering more money. How much? She wouldn’t say. I feared I was about to enter a bidding war with two college kids with rich parents. However, on a Saturday morning in a computer store, I got a call from Carol. Michela chose me. Why?

The students were AMERICANS!

American college students have horrific reputations in Rome. They party. They drink. They break. They are the second coming of Roman senators, complete with togas but without the clout. I felt like I’d just won “The Bachelorette” contest.

I now have a long shopping list: patio table and chairs, patio umbrella, portable firepit, hurricane candles, bar chairs. Oh, and visitors. I don’t think that last one will be a problem.