Risotto: “The most important dish in Italy”

VERCELLI, Italy — My train rolled across the Lombardy-Piedmont border, that area in Northern Italy featuring Lombardy’s sparkling lakes and Piedmont’s towering Alps. You can go boating on Lake Como in the morning then ski in Sestriere in the afternoon. Later, go have a glass of Barolo, the pride of Piedmont, with your evening meal.

If you want to eat like a local, you’ll do what I did here on a recent assignment. You’ll eat risotto, which one local chef told me, “is the most important dish in Italy.” My train was taking me through the heart of risotto country. This plain spanning the two regions, called the Po River Valley, was covered in rice paddies. Flooded fields with grass stalks sticking up from the water reminded me of similar rides through rural Laos and Thailand and Vietnam.

The only thing missing were workers in conical hats. In fact, there weren’t any workers at all. 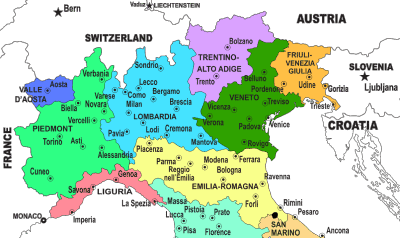 Rice production has changed dramatically over the years and I was headed to the heart of the rice capital of Europe. The area around Vercelli, a lovely, leafy town of 46,000 people halfway between Milan and Turin, grows 100 varieties of rice. It produces 1.5 million tons of rice annually over more than 900 square miles of rice paddies.

I came to Vercelli to do a story for the New York Times on Giovanni “Johnny” Pellielo, a 51-year-old ordained bishop trying to make his eighth Olympic team in trap shooting. Along the way he led me to where I would have the greatest risotto of my life.

In the Hotel Cinzia, a homey three-story, family run hotel, is Christian & Manuel Ristorante. It is the gastronomic jewel of Vercelli: a one-star Michelin restaurant. Their specialty is risotto, Italy’s famous rice dish of which the brothers Christian and Manuel Costardi have made more than 100 recipes.

I ordered La Panissa alla Vercellese, Vercelli’s oldest and most traditional recipe made with salami, Barbera wine, beans, cheese and their local Carnaroli rice, considered by many as the best rice in Italy. It was thick as chili and the flavors of the beans and salami exploded along with a tint of  red wine. The rice was thick and soft and had the perfect texture to hold the heavy sauce. It was simply the best risotto I’ve ever had. I had to know how they do it.

The next day, I sat in the hotel lobby where Christian was born 42 years ago. He grew up in the building his grandparents built in 1967. He began cooking on a toy Dolce Forno (Sweet Oven) when he was 2 and at 14 he went to cooking school. After stints in Sardinia and Venice, he returned to his old home to open the restaurant with his brother in 2007. They earned their Michelin star in 2009.

Christian was nearly apologetic. On the menu that day were only 22 risotto dishes.

“I like risotto because I’m born in Vercelli,” said Christian, fit and bearded with tattoos on his biceps. “I went around Italy for work. When I came back I  looked outside my window. OK, the most important thing in my town is the rice. I have to do something for this.”

One doesn’t equate Italy with rice. Obviously, pasta is the starch of choice here. But he makes a good point that rice is the “most important.”

“You can eat pasta or pizza all around the world,” he said. “But it’s difficult to eat a good risotto outside Italy. If you want a good risotto, you must come to Italy to eat in our country. It’s a dish that’s representative of a nation now.”

He’s right. I’ve ordered risotto in the U.S. and it usually comes out more like rice soup. It’s always too watery with no flavor coming from the rice itself. The only joy comes from the ingredients which are also always lacking. I tried making risotto myself. It joined a long line of my Italian cooking disasters.

The history of rice in Italy

Here in Italy, it’s in most restaurants. It’s a great winter dish, particularly in Northern Italy where they have proper winters. Actually, rice production in Italy began in the south where the Arabs introduced it in the 14th century. They found the humidity along the Mediterranean perfect for short-grain rice production.

It eventually made its way to Milan where it became hugely popular with the wealthy Milanese as rice remained too expensive for the common man. The Spanish controlled Milan from the 16th to the 18th centuries and rice led to Spain’s most popular signature dish, paella. Rice also became the staple of ossobuco, the stew that has become Lombardy’s signature dish.

The origins of risotto date back to the 16th century. According to legend, a glassblower apprentice helping build the dome’s stained-glass window of Milan’s Duomo would use saffron as a coloring unit. Angry at locals for giving credit to the spice for the window’s beauty instead of him, he poured an excessive amount of saffron into the rice dish of his master’s wedding. Instead of making people sick, he made them happy. The dish was a huge hit.

Risotto today is made from the same basic ingredients as the last 200 years: rice, broth (usually chicken), onions, butter (although oil is gaining more traction), wine, parmesan and saffron. But the dish has branched off in so many directions the list of varieties is too long to list. Each region has its own version. For example:

Christian and Manuel have gone crazy with the experimentation. They are out there. They’ve used leeks, lemon, caper powder, licorice powder and chili garlic. On one dish I had he calls “Vercelli Sicily Roundtrip,” he grated the liver of a red mullet fish onto it. It tasted like rosemary and oregano and really added a nice finish to the risotto filled with shrimp bisque, prawns and bay laurel.

But the liver of a red mullet? Christian smiled.

“The idea arrived from a trip that me and my brother did in Australia, to the Northern Territories in Aborigine country, the Aborigines close to the sea,” he said. “They cooked fish on the fire. At the end of the preparation, they had the liver of the fish inside. We tasted it and it was very good. We came back and we thought of how to use that idea.”

They took the liver from the red mullet, found in the Mediterranean, marinated it a little bit and chilled it in the freezer before grating it on the dish.

“It’s very nice because you can have a taste of the sea,” he said, “the idea of a wave in your mouth.”

Type of rice is key

The key, however, is the quality of rice. That’s where Vercelli comes in. It lies in a plain with plenty of water from the Canale Cavour, the artificial canal that moves water around the area. Even during droughts water is always present. The Costardi brothers worked with nearby Gli Aironi farm to develop their Carnaroli rice.

Andrea Corsaro is Vercelli’s mayor. A jolly, talkative man in his third term, he loved telling me about Vercelli’s 13th century Abbey Sant’Andrea and its matching twin towers, the 16th century Vercelli cathedral and the city’s sports traditions, not only with Pellielo but also its status as a fencing center.

But he perked up when I asked about Vercelli’s rice tradition.

“We will send our rice to China,” he said with a smile. “It’s better.”

For years, people from all over Italy came to Vercelli to work the rice fields. It’s backbreaking work. You’re calf-deep in water and tall grass, bent over picking up rice stalks. The tradition has given way to machines since the 1950s. However, rice is still important to the economy.

“It’s important not only for the food for Vercelli but it’s important for the work,” Corsaro said. “It’s a great part of the reality of our society. We have also this wide area. We don’t have (big) buildings. We have this type of environment.”

I told Christian about how my rice is about as consistent as my golf game used to be. I quit golf. I don’t want to quit rice. But it always comes out undercooked in my big rice steamer. Christian gave me a quickie lesson:

“For risotto you have to have hot water or hot stock or broth,” he said. “If you want you can use vegetable broth. You start with the rice in the (hot) pan with nothing (else) inside. You do the first 20 seconds, only the rice with some salt and some pepper. The first step is the toasting. When the rice is very hot and you can not put your hand in contact with the rice, you add the water. You cook 15-17 minutes.”

I got a bag of the Carnaroli, adorned with the brothers’ caricatures, and tried it when I returned home. It looked soupy. It looked too wet. Yet when I poured it into a strainer and then into a bowl, it tasted just like it did in the Michelin-star restaurant. Topped with stir fried chicken and vegetables, it became a recipe I immediately added to the menu at Caffe Henderson.

Here’s the recipe for panissa:

The previous night, soak the beans. In the morning, cook them with water, celery, carrot and onion. Cook until the beans become soft. Chop the salami and brown it in a pan with some onion and a drizzle of olive oil. Add the rice and toast it. Then add a teaspoon of the tomato concentrate and fry it slightly while continuing to turn it to release the fats. Pour in the wine and let it evaporate. Add the bean cooking broth (one part rice to two parts broth). Cook the rice for 15-17 minutes. When the rice is about three-quarters done, add the cooked beans and finish cooking. Remove from heat, season with salt and pepper and stir in some butter and parmesan. Serve hot with a sprinkle of pepper.

If you want to visit …

How to get there: Trains leave Milan about every hour for 50-minute ride to Vercelli. Cost is 7.55 euros.