It was Rome’s birthday Thursday. My adopted city turned 2,775. Occasionally she looks it. The bags of garbage scattered around overflowing bins remind me of rural Nicaragua. Public buses sometimes inexplicably burst into flames. The mail service hasn’t improved since the Ancient Roman army carried oracles by foot.

But other times Rome steps into the modern world, even the futuristic world. She puts on her best clothes, some mod shades and opens the ancient city to a new dimension.

Take Thursday’s birthday. I attended two press conferences, both projecting me into future worlds that are hard to imagine in such an ancient city: Space and the scary advancement of technology.

Both are shows that just opened to the public: A multisensory orb called a Synesthesia that aims to help us understand our relationship with the threat of machines. (Spoiler alert: It’s weird.) The second is the reopening of Rome’s Planetario, the planetarium that had been closed for eight years. It features a stupendous show on a wraparound ceiling screen displaying the planets and stars, with images of Rome thrown in for art’s sake.

The juxtaposition with history was not lost on me. The Synesthesia was held in the Imperial Forum Museum in Trajan’s Market, one of the most hopping public markets back in the days of the Roman Forum. One room in the museum was filled with artifacts from 2,000 years ago; another had a 10-foot-high orb warning me about the evils of Google.

The Planetario is in l’EUR, the neighborhood Benito Mussolini built but didn’t complete due to his difficulties of civic planning in Rome while hanging by his toes in Milan. From fascist architecture to the Big Dipper, the Planetario represents a bridge to another world.

Paired with the Synesthesia, the city wants to focus on technology to broaden its horizon and rethink the environment and community.

Here’s a look at how I spent Rome’s birthday:

The Imperial Forum Museum is just above the old Trajan’s Market which you can see when you walk the grand road of Via dei Fori Imperiali on your way from Piazza Venezia, where Mussolini revved up his panting following from his balcony, to the Colosseum. During Ancient Rome, Trajan’s Market was a massive complex of shops, apartments and offices. Believed to be the world’s oldest shopping mall, it also served as the headquarters for Emperor Trajan (98-117 A.D.)

I walked into the museum and saw the two brain trusts of the Synesthesia doing a TV interview. Severino Alfonso and Loukia Tsafoulia are architects and professors of architecture at Philadelphia’s Thomas Jefferson University. It’s there where they developed the Synesthetic Research and Design Lab, the product of which was hidden behind a curtain in back of them.

I took an elevator upstairs and attended a packed press conference. Joining Alfonso and Tsafoulia at the dais was first-year Rome mayor Roberto Gualtieri. I fought the urge to raise my hand and ask him, “When in the hell are you going to get the garbage picked up?” and instead tried figuring out why we were all here.

Tsafoulia talked about the environment and the impact of physical and mental health, of interaction and perception. It’s also conceived through the orb which is “a central nucleus of multiple projections with a shapeless structure.”

The idea is to attract curious visitors to the distorted shape. Then “the fluctuating effects of light and sound invite the viewer to approach and engage in sensory conversation.”

My sensory conversation with the Synesthesia didn’t last long. I went downstairs ahead of the mob and was one of the first inside the curtain. I saw a giant white orb standing 2.5 meters x 2.5 x 2.5 (8 feet x 8 x 8) but with irregular sections. It looked like a giant patchwork volleyball.

It had a couple of small round openings. I peered inside. I saw an eye. It was mine. My eye was also projected on the wall behind me where people began to gather. (Are my eyes really blue?)

I had no idea what my eye was trying to tell me. I approached Alfonso, a Spaniard with a long list of architectural degrees and professorial jobs. I asked him a simple question: What effect does this orb have on mankind?

“When you go by a ticket, you buy it from a machine. When you enter a store, you’re recorded and then the recording is used. When you enter your home there are devices that may not be present not but might be in the future.”

“So there’s a problem with our relationship with machines?” I asked.

“There are multiple layers of benefits and problems,” he said. “Benefits are they’re part of the reason we are progressing. But there are also layers of problems. Issues of privacy have to be dealt with.”

Frankly, I don’t see how seeing your eye on a wall will help you accept that we’re constantly being watched. I don’t care if Google knows everything about me.  I have nothing to hide. Others may. If you didn’t know, the orb is designed to convince you.

“Any time your eye appears in the cinema, in the blob, it goes to the Web,” he said. “Automatically your eye belongs to Google or to Microsoft. What do they do with the eye? We don’t know.”

At about the same time as he spoke, a group of my fellow graduates from Rome’s Gladiator School (Yes, Rome has one.) dressed like gladiators and made their annual Rome birthday march to the Colosseum.

But unlike in Ancient Rome, this audience was bigger. Thanks, apparently, to machines, the world was watching.

From Trajan’s Market I took the subway to l’EUR. In 5 miles (9 kilometers) I went from ancient ruins of Doric columns and marble statues to big, broad boulevards and massive buildings with large windows and signs. Mussolini’s fascist designs wanted to show strength. His buildings are the architectural equivalent of armored tanks.

On Piazza Giovanni Agnelli, featuring two huge entrances and two enormous symmetrical buildings, I found the old Planetario. It’s open for business again. It closed for an eight-year restoration and the addition of a museum.

The opening was full of pomp and circumstance. Mayor Gualtieri again showed up, this time wearing Italy’s green, white and red ceremonial sash. They even cut a ribbon.

In the entrance, the first thing I saw was a giant telescope. The Old Zeiss Mark II Projector was donated by Germany for the damage done during World War I and Mussolini inaugurated the telescope in 1928.

Billed as “Planetario: Return to the Stars,” the show features the new Sky Explorer software with 4K resolution. It projects images on a round screen on the roof that’s 300 square meters (3,330 square feet) and 14 meters in diameter (46 feet).

I walked in and took one of the 98 seats in the theater. It’s quite lovely with big padded chairs that rock all the way back to observe the changing ceiling. The hour-long show is one part ode to old Rome and many parts the heavens above it.

It starts with aerial views of Rome, from Circus Maximus to the Colosseum to the Roman Forum. It shows the constellation of stars twinkling over the city. Then it gets into space with long-range, high-tech photographs of planets and the galaxy, including shots of the Big and Little Dippers and Saturn with its majestic rings.

The best shot was a space view of Italy at night, with the lights of Rome shining like a spotlight and the landscape growing darker the further inland. A space station hovered over it all.

The show went into Centro Storico, into the Pantheon, Rome’s 2,000-year-old landmark with its circular hole in the roof. Looking up to the night sky, the Pantheon’s roof looked like the eye of a telescope.

During an informal press gathering, Gabriele Catanzaro, the Planetario’s astronomer, said, “The system allows us to move in space and time … We use this machine to tell the universe in our own way, combining archeology and scientific research.” 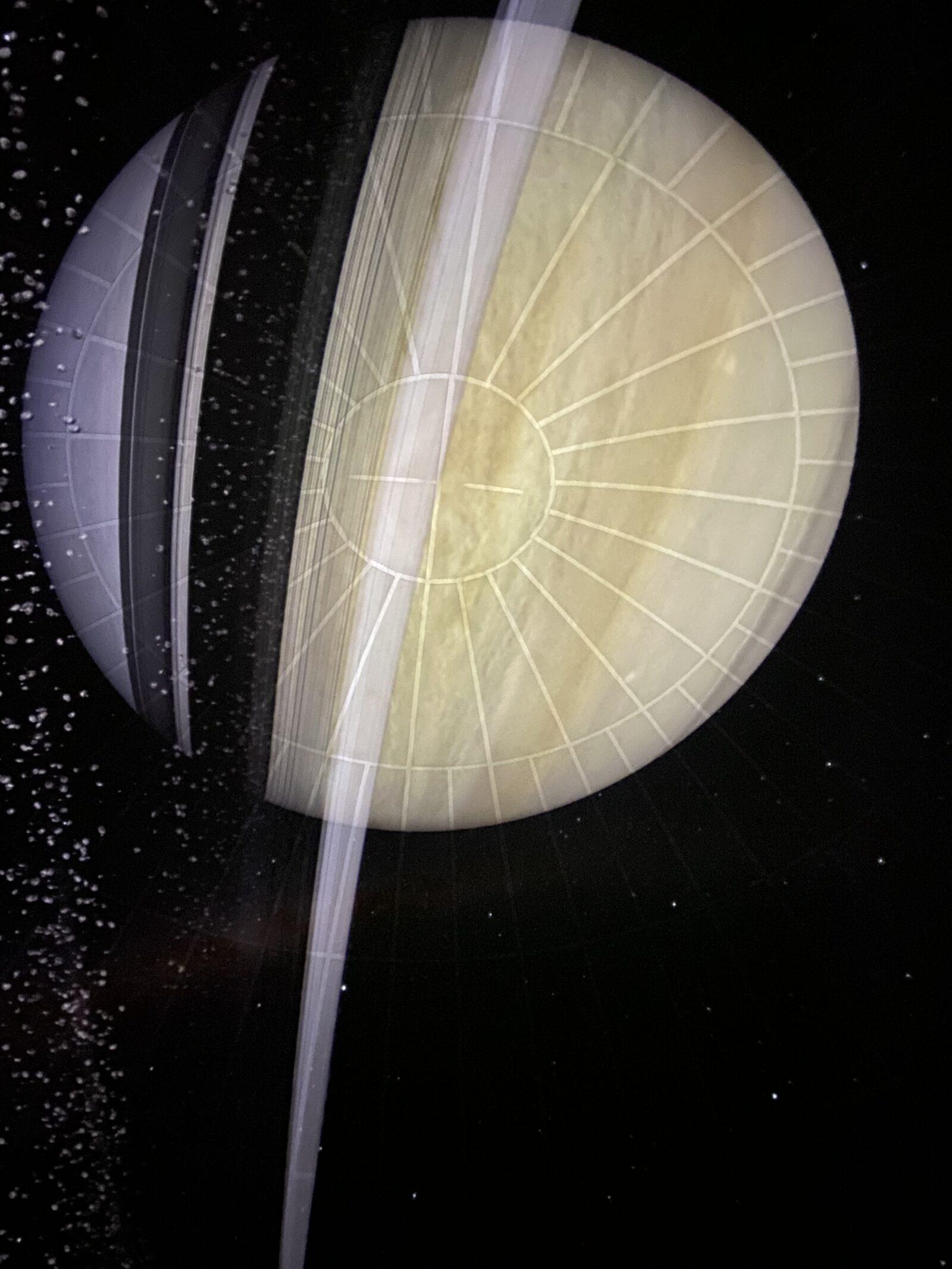