These are sad days in Rome. Like the end of fall colors in New England and ski season in the Rockies, Rome is bracing for its twice annual depression.

The end of saldi.

Saldi is one of the magical Italian words few outside Italy know. But it makes Italians sprint up streets as if racing for a gold medal in the Olympic marathon. In a way, saldi represents a marathon. Saldi is Italian for “sales.” Italy has two every year. The exact dates vary by store but the months do not. The winter saldi begins the first week in January and ends in early February. The summer saldi starts the first week in July and ends …

That’s Sept. 1, meaning if you are looking for clothes bargains in Rome, you’ll have to wait four more months. Considering the insidious prices some stores charge, many Italians shop only two periods a year. Saldis have become as much a part of Italy’s fashion culture as stilettos and designer sunglasses. 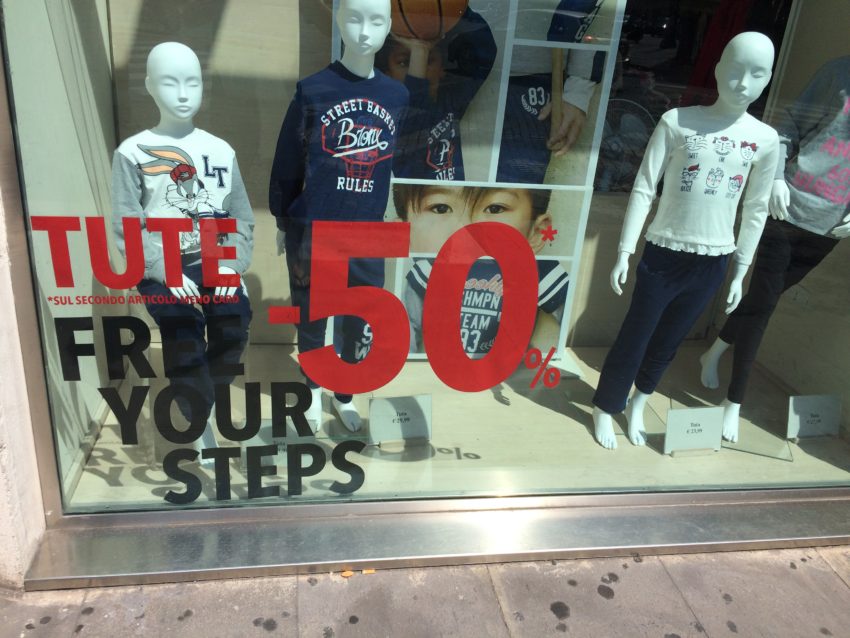 I know all about them. I’m one of the few straight men I know who likes to shop. When you’re 59, single and living in Rome, you need all the help you can get. Italian clothes help. When you’re retired, you need all the financial help you can get. Saldis save one’s retirement fund. During this saldi period, I bought white and turquoise polo shirts (My style during Rome’s steaming summers.), a pair of navy shorts (To hell with style during summer days in Rome. I’m staying cool.), a pair of Rome’s requisite red pants (Rome is about the only city in the world a man can get away with wearing red pants as I’d get my ass kicked anywhere south of the Mason-Dixon line.) and a light cotton turquoise sweater (Perfect for Rome falls.). The regular value of them all was 254 euros ($284.04). I got them for 128.90 ($144.14). That’s nearly 50 percent savings.

This is nothing. A lady friend bought a pair of Prada shoes marked down from 400 to 125. She bought another 500-euro pair of Sergio Rossi for 80. (For those women reading this, these are Prada and Sergio Rossi outlet stores inside the Mall Outlet Village in Reggello, Tuscany, near Florence. Ladies, the line forms to the right.) 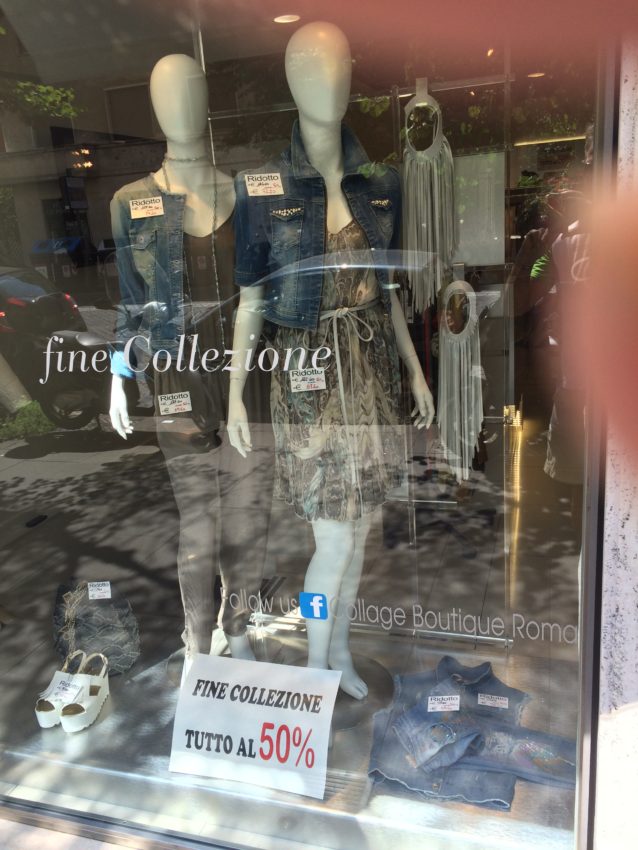 To understand the importance clothes has in Italian culture, one must understand the concept of La Bella Figura. It means “The Beautiful Figure” but it is more than body shape. It’s style. It’s attitude. It’s image. It’s how you look at yourself and how you want the world to look at you. Italians are not anything if not proud of their appearance, particularly now when their world is falling apart around them. They have no control over salaries. They have no control over inflation. They have no control over corruption. But they have control over their appearance and they take great lengths to show themselves in the best possible light. Who else but Italian women would wear stilettos along 2,000-year-old cobblestone streets that could trip up a Bulgarian gymnast?

Italians can’t afford many clothes, but the clothes they buy are excellent. They also mix and match better than any people in the world. Parisians are very elegant, but they don’t accessorize like Italians. They don’t have the designer handbags and scarves that set Italians apart. The Italian companies know this. That’s why a Prada handbag some Italian women carry will cost more than the cars they drive. It’s also why selling knockoff Gucci bags on the streets is considered a respected job among African immigrants. 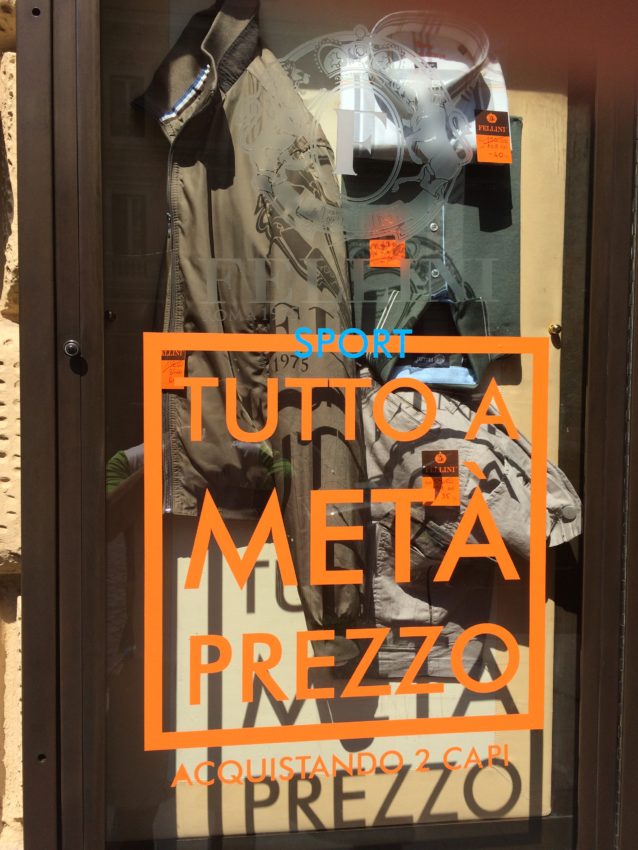 Prices, however, are geared toward the female tourist. Women come to Italy so they can show off their shoes to the woman in the cubicle next to them in Santa Monica. Men do not travel to Italy to buy Italian shoes. They come to Italy to find women who wear them. The men’s prices are geared toward the Italian man with a modest income, not the male tourist. All of my shoes but my Brooks sneakers are Italian. I didn’t pay more than 60 euro for any of them, even when they weren’t on sale. The minute I walked out of the store, every pair felt like my feet were getting massaged. They still do.

The economic crisis that has gripped Italy for so long (unemployment has jumped from 8.4 percent to 12.7 in three years) has cut down on business. According to Valter Giammaria, president of the retail association Confesercenti Roma, families were expected to spend an average of 150-180 euros in this period. Last summer it was 210-240. 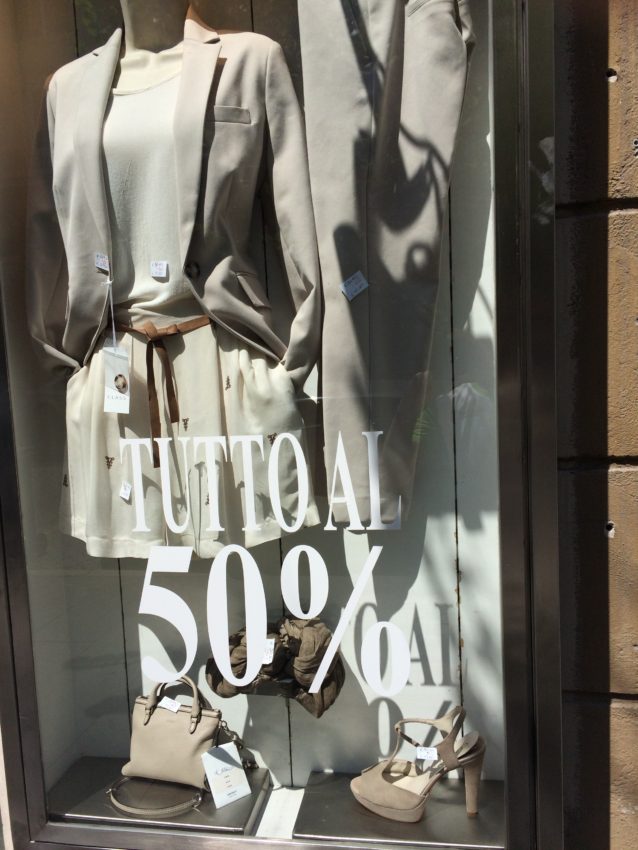 Italy has strict laws about saldi periods. Businesses must post an item’s original price, the sale price and the percent of savings. Also, be careful. It doesn’t stop them from jacking up prices right before the saldi begins to make it seem like it’s more of a bargain than it really is. They do the same in the U.S. and it’s nearly impossible to detect.

And when you buy something, be sure you want it. It’s easier to return perishable food than clothes in Italy. I don’t know of any store that will give you money back. Most, but not all, will let you exchange clothes for equal value. Also, check for signs inside the stores reading “Non si prova.” It means, “You can’t try it on.” Seriously, many stores do not allow you to see if something fits. That seems ridiculous for pants and jackets. However, when you see how much people sweat in the summers here, you’ll be happy the policy also applies to shirts. 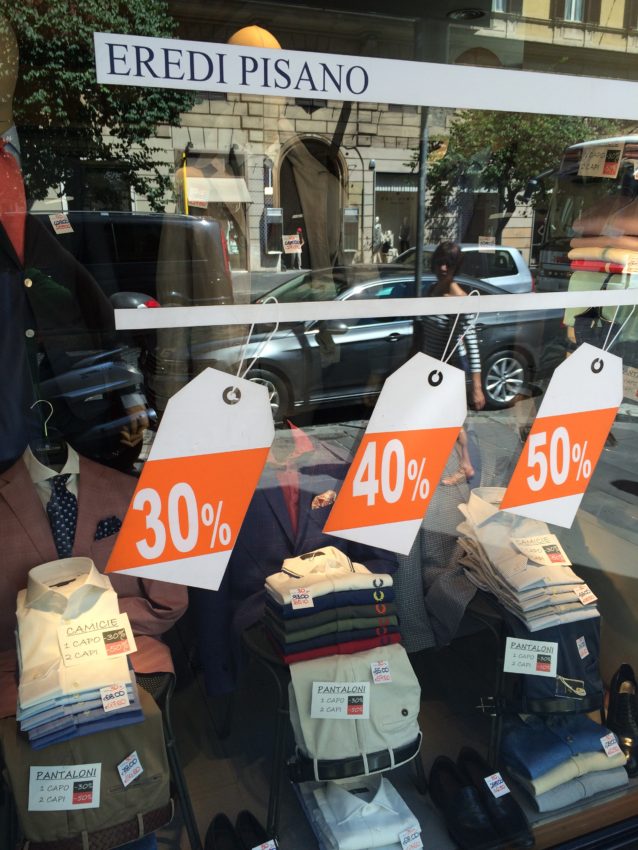 With this in mind I made one last foray down my favorite shopping street in Rome. The city has three main shopping drags: Via del Corso and Via Nazionale in Centro Storico and Cola di Rienzo in Prati near the Vatican. If you want true sticker shock, go down Via Candotti near the Spanish Steps where you’ll find Armani, Prada, Gucci, etc. This street is so expensive, stores here once charged entry fees. In fact, don’t go anywhere near the Spanish Steps unless you want to take pictures — like the one I once took of some men’s alligator shoes for 6,000 euros.

The other three are affordable for those not sporting roman numerals after their last name. Via del Corso features national brands such as Zara, Gutteridge and Benetton. Via Nazionale has Max Mara and Celio. I prefer Cola di Rienzo which stretches all the way from Piazza Risorgimento at the Vatican wall to the Tiber River. Few tourists coming out of St. Peter’s have the energy to prowl this street and it features some of the top men’s stores in Italy. I buy most of my shoes at Fabio DeMarco, my suits at David Saddler. 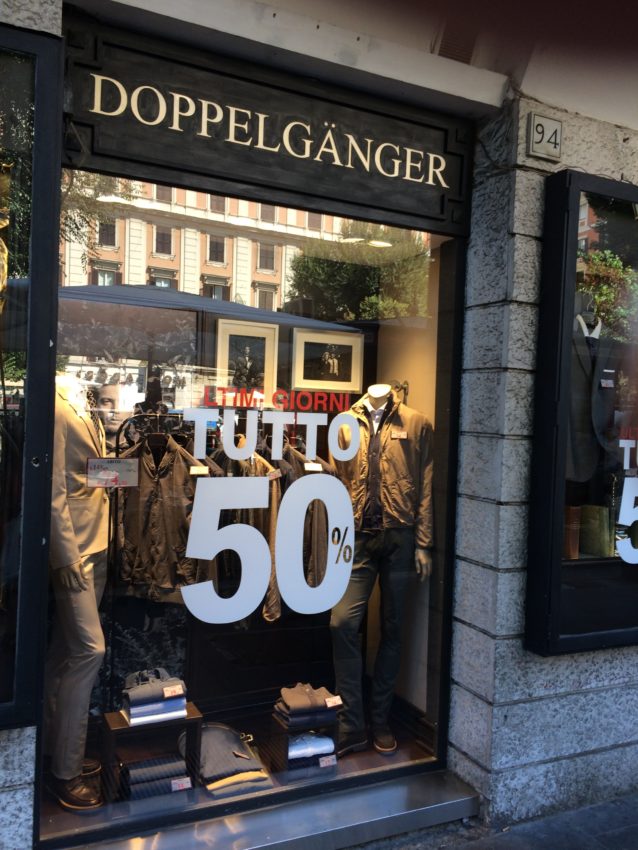 On Friday, however, I told myself I would buy nothing. I’d take notes. This was strictly journalistic research. However, I learned that the end of the saldi is when the real bargains happen. Nearly every store had items 50 percent off. Shirts at Fellini went from 78 to 47 euros. Shoes at Angelo di Nepi dropped from 90 to 45 and purses from 195 to 95.

When I saw Eradi Pisano had a blue pin-striped sport coat cut from 425 to 255, I had to explore. A thin woman in a stylish black pants suit and short haircut hovered behind me as I perused the men’s sweaters. They covered the entire rainbow of colors, even in my XL size. This is major news. The problem with saldis is they don’t often replenish their stock. You may find the shoes or coat of your dreams but they are only have mediums or smalls left. Italian women have been known to go Ronda Rousey for the last blouse in their size.


After gazing at spectacular artwork on the wall (this definitely was not a mall in Des Moines), a light, sky-blue sweater also caught my eye. So did the exorbitant price: 95 euros. The clerk kindly picked my jaw off the floor. “Il prezzo e’ la meta’,” (The price is half), she said. It was really 47 euros — for three more days. I tried it on and it fit tight and right, just like Italian style. As I came out she expertly told me half a dozen colors of pants that would go with it, all of which I have. I plunked down my credit card and walked out with an impulse buy I swore I wouldn’t make.

That’s saldi for you. They lure you in off the streets like the smell of fresh basil-laced tomato sauce. You really have no control. So you may as well give in to La Bella Figura. There are worse gods to follow.