The Baths of Caracalla: But really, how clean were the Ancient Romans?


Today’s kids probably wonder what it was like for me growing up in the ‘60s and ‘70s without Internet, cell phones and the Kardashians. After being retired in Rome for nearly four years, I think back further, like 2,000 years.

What was it like in Ancient Rome, without water treatment, toothpaste and showers?

Rome was the most powerful civilization in man’s history, but how clean were Romans when the toilet flush was 1,300 years from its first plunge? Only the real rich had private baths and the tenements didn’t have running water. Did you know Julius Caesar brushed his teeth with urine?

No, that wasn’t why he was stabbed 23 times. Urine is what Romans used for toothpaste. They made soap out of urine. When someone in Ancient Rome said, “I’m pissed off,” it likely meant he just took a bath.

Baths were big in Ancient Rome. They were all over the city. They still are. I once took a bike ride down the Appia Antica, the ancient road to the sea and along which Spartacus’ rebellious slaves were crucified (see Ancient Rome: Failed Labor Strikes). I passed the remains of huge villas with expansive tiled floors where hot tubs once sat.


I recently toured Rome’s most famous baths, the second largest in Ancient Rome. Terme di Caracalla (Baths of Caracalla), less than a mile southeast of Circo Massimo, are only a mile from my apartment. I pass them all the time. On a warm fall day, I took the bus up the street and got off next to the complex.

The Terme di Caracalla looks like a sandstone Legoland after your kid went at it with a 9-iron. Tall yellowish towers are interspersed with jagged walls enclosing massive halls with tiled floors. 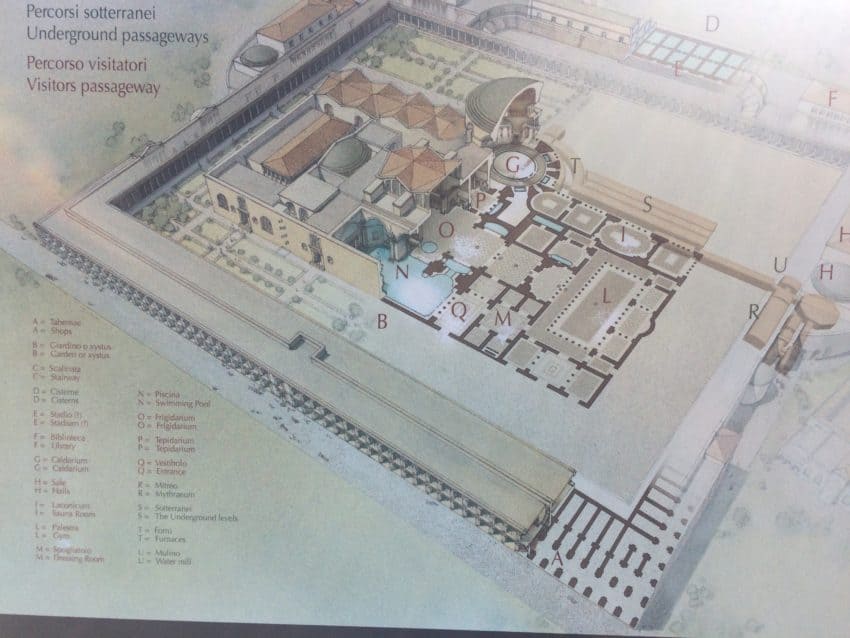 Started in 212 by Emperor Septimius Severus, it was finished by his son, Caracalla, in about 235 AD. It was called one of the Seven Wonders of Rome. The Terme di Caracalla was one giant spa, the Palm Springs of its day.

The baths were scattered throughout the Roman Empire and often became the hub of the city. The Romans built one of their most elaborate public baths in England where they introduced a sophisticated water system and an array of different pools. The town’s name?


I paid my 8 euros at the modest ticket booth, void of the schlocky souvenir store you usually must walk through in many Rome sites. The summer high season is over, leaving the complex to only a few of us. I found myself in the first room, a giant open rectangular space that represented the gymnasium. Workers were refurbishing tile on the old floor. Romans would wrestle, box or do calisthenics before turning right into an adjacent dressing room.

On the other side of the dressing room was where the Olympic-size pool stood. To its right, side by side by side, were the cold, medium and hot pools. Today, the 20-meter walls still stand but holes exist where the pools once were. Fragments of the floors decorated with ancient Roman figures lean against the walls. Grass covers where beautiful tile once lay. The floors of the bath once were colored marble glass brought from the Orient and ringed with bronze and marble statues.


Coal and wood were burnt underground to heat water from an aqueduct that was in use until the 19th century. Slaves worked in tunnels that stretched for hundreds of meters under the baths. Those tunnels are open to the public but the gate was unfortunately closed when I arrived.

The villas on Appia Antica have better preserved pools but the massiveness of Caracalla is stunning. If you close your eyes and let your mind drift (You get good at that after four years living among ancient ruins), you can imagine the buzz, gossip and flirting that went on here 2,000 years ago. At the time in the 3rd century AD, anarchy began creeping into Rome and cracks started appearing in its once impenetrable empire.


Terme di Caracalla was in use until 530 before the Goths ransacked Rome and cut off the water supply. Shortly thereafter, with the citizenry unwilling to bathe in standing water used by 6,000 other filthy Romans, the baths were abandoned.

Since then it became a burial ground for pilgrims in the 7th century. An earthquake in 847 destroyed much of the building then in the 12th century it was used as a quarry for construction material and a vineyard and garden in the 14th century. Then in the 16th century the archaeologists poured in it from around the world and continue to this day. Its design inspired New York’s Penn Station and Chicago’s Union Station.

As I wandered the huge grounds, I was impressed with how attentive Romans were to hygiene. I read Ancient Romans went to the baths every day, that women used lanolin from sheep wool for sweet-scented skin. But, like Rome, this story has many layers. My research peeled back the silky, rich appearance of the Roman populace to reveal something else.

Yes, just as Ancient Rome’s opulence and riches hid Rome’s true violence and poverty, Rome’s baths hid the filth underneath. Rome in the 3rd century had 144 public toilets, not nearly enough for a city population of more than 300,000. The latrines fed into a main sewage system designed more for drainage than water treatment.

While historians have praised Ancient Rome for its elaborate sewer and drainage system and its cleansing of public odor, the ancient toilet was a receptacle for embarrassing, gross disasters. Due to the sulphide and methane found underground, you could be sitting on the commode when the ground underneath your derriere explodes. Rats often crawled up through the toilet. Toilet paper was sometimes a communal sponge on a stick.

And then there was the octopus …

The historical website Ancient Origins wrote about an Iberian merchant in Puzzuoli near Naples where he hooked up his toilet to the public sewer. One time an octopus swam from the sea, through the sewer system and up through the toilet into the man’s home where he feasted on pickled fish in the pantry.


Also, Rome spread filth around its empire. According to the journal Parasitology (Yeah, I know. I need a life.), Romans built public baths in nearly every new land they conquered. What else did they bring with them?

“This latest research on the prevalence of ancient parasites suggests that Roman toilets, sewers and sanitation laws had no clear benefit to public health,” said Piers Mitchell, author of the study. “The widespread nature of both intestinal parasites and ectoparasites such as lice also suggests that Roman public baths surprisingly gave no clear health benefit, either.”

Even Roman food added to the filth. The favorite condiment in Ancient Rome, a fish sauce called “garum,” helped spread parasites as well.


Rome still has public baths. Last year I blogged about AcquaMadre, a bath house in the Jewish Ghetto designed on a smaller scale along the lines of those in Ancient Rome. Three years ago I blogged about a huge thermal pool complex in Viterbo north of Rome. I gave my girlfriend, Marina, a gift card for QC Terme, a beautiful spa in Fiumicino near Rome’s airport.

But that is now. Ancient Rome was then. Now I want to do what I’ve been dying to do since researching this blog.