The Navigli: Canal neighborhood wins me over to Milan

MILAN — In all the beautiful places I’ve been in Italy, from Sicily to the Alps, Milan has always been nothing more than an afterthought, an amusing yawn. I always thought the fashion capital of the world was a boring pair of dress shoes, greatly scuffed. It’s Newark with a big church. In a blog about Naples, I called Milan Italy’s “snooty catwalk model, dressed for the gods with an attitude to match.”

Milan was always the anti-Italy. If the U.S. taught me how to work, Italy taught me how to live. But Milan has an American mentality. It’s work and hurry. They even drink coffee faster here.

As Italian journalist Enzo Biagi wrote, “In Milan, everything is regulated by money. They say ‘capuccio’ in bars instead of ‘cappuccino’ to save a syllable.”

However, I have softened. Recent visits to Italy’s second-largest city have revealed Milan’s soul. I have felt her embrace. It’s never as warm as Rome’s but Milan is hugging me in an Armani dress, too.

I have forgotten the waitress near the Duomo who disregarded my plea for service with a flippant back wave as she walked past my table. I have forgiven the hotel clerk who told me to leave the lobby if I wanted to use my cell phone. I stopped making jokes about Lombardy’s regional cuisine in which its star is ossobuco, a messy mix of veal shanks, vegetables and broth and the redheaded stepchild of Italian dishes.

I have since met enthusiastic waitresses, helpful hotel clerks and laid-back Milanese. One time I even had a good pizza. Add an excellent public transportation system, clean streets and views of the Alps (admittedly on rare clear days) and Milan is creeping up my long list of wonderful Italian destinations.

I’ve always gone to Milan for work. Recently, I was between assignments in Northern Italy and came to Milan to hit one of its most famous neighborhoods, one that might complete my acceptance. The Navigli is a zone where two canals converge with a 400-year-old dock in a bustling retail area and still bears the fingerprints of Leonardo Da Vinci and Napoleon Bonaparte. Once used by the Romans to transport goods, the Navigli today is tranquil waterways boasting bars and restaurants, boutique shops, bookstores and green, quaint courtyards, everything you’d need for a relaxing afternoon or evening.

They call it Milan’s Venice. It’s not really. You can still hear car horns from the streets above. However, you’re also sitting at a sidewalk cafe next to water with nothing to do and nowhere to go. It’s the kind of lifestyle I never associated with Milan and one I wanted to experience.

Milan was emerging that week from the lifting of Italy’s second lockdown and patrons had already returned. The night before in my hotel, I saw TV news reports from the Navigli with crowded outdoor bars, clinking cocktail glasses and plenty of laughter.

It’s been a long year here in Italy, and we’re thirsty.

The next morning on a cool, cloudy day I took the sparkling clean subway to the Porta Genova Metro stop southwest of the city center. Rain was expected. Businesses were setting up tables and chairs for the pending lunch crowd.

I was on Naviglio Grande, the busiest of the canals. It’s a long 50-kilometer straight waterway about 30 feet wide and lined with three and four-story buildings of yellow, white and stone, with varying degrees of wear. Stone bridges curl elegantly over the water and pink and purple flowers fill boxes in front of restaurants.

At 11 a.m. the area was nearly empty. A man wheeled a cart filled with leather belts and electronics to his old spot, hoping he’d make up money he lost during the two-month lockdown. An exercise walker in a designer jogging suit rushed by. 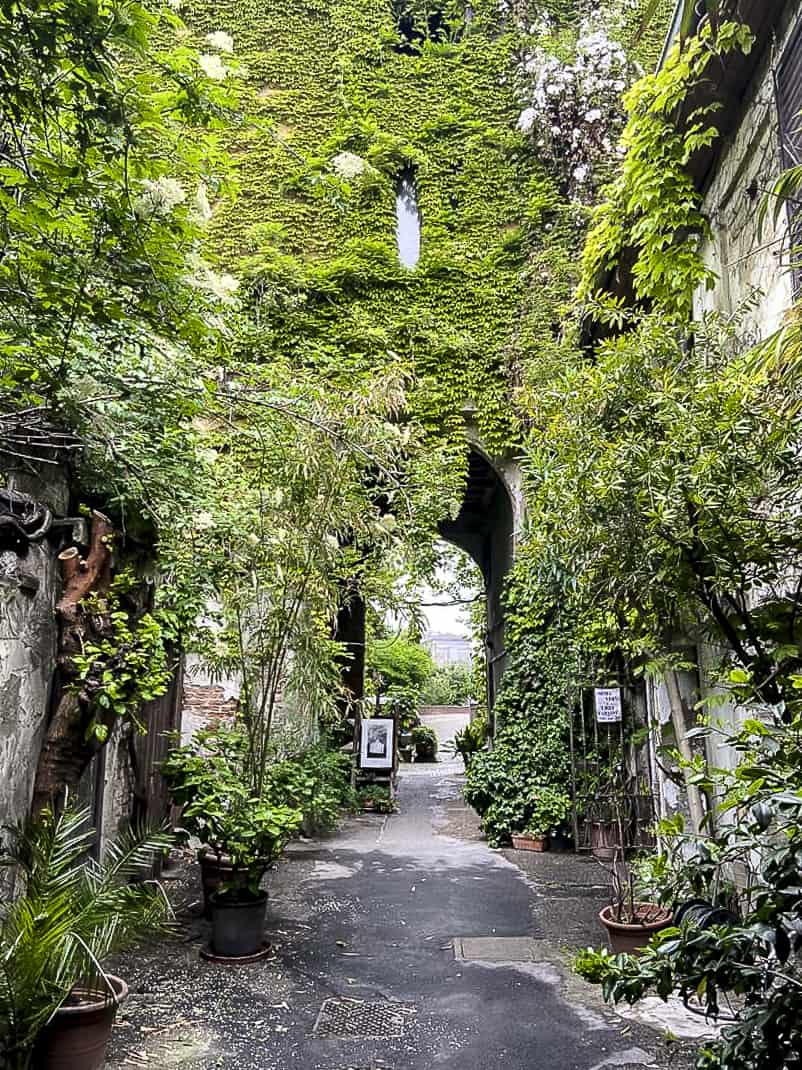 The charm of the Navigli isn’t in the restaurants and bars. It’s the tiny courtyards that dot the canals. They belong to neighborhood apartment buildings and ooze with charm. They look like something Monet would’ve painted. I passed one where a small driveway led under an archway where 15-foot ferns and ivy climbed the walls. Inside was a small jungle that led to the other side.

Another led to a large courtyard covered in tall, potted ferns that shaded two small tables, the perfect atmosphere for an off-the-charts romantic lunch.

I continued to the end of the canal to Darsena, the main dock built in the 1600s and connects with the Grande and Pavese canals. A covered market dominates the far bank. A butcher shop, a vegetable market, all the markings of Italy’s traditional public markets, were there. Across the cobblestone walkway were a string of bicycle repair shops.

At one end of the market is GUD, a cafe with a huge courtyard overlooking the canal. Roberta Flack’s “Killing Me Softly” played ever so softly on the loudspeaker. I took a table, all of which were adorned with little potted ferns. On the pleasant but cool morning I had the best cappuccino I’ve had in Milan. Rich coffee. Thick foam. Perfect size.

I looked at the black-green water and saw baby ducks floating around. They all ran comically into a divider separating one end of the canal from the other. Hovering over the canal were old buildings with wrought-iron and cabled balconies. A tram that looked out of the 19th century rumbled by.

Back in the Middle Ages, this area was Milan’s hub. Over 35 years the city built 90 kilometers of waterways, organizing the canals the Romans once used. The Grande was born in the 12th century, a good 200 years before the gargantuan Duomo, Milan’s centerpiece, was built about a mile to the northeast. The Navigli consisted of five canals: the Grande, Pavese, Martesana, Paderno and Bereguardo.

In 1482 Ludovico il Moro, who ruled as Duke of Milan, commissioned Da Vinci to design a support network of canals which would connect them with lakes Maggiore and Como, the River Po and, farther afield, the Adriatic and the trade routes of the Mediterranean. The draft can be found in the Museo di Navigli on Via San Marco near the train station.

In 1805 after Napoleon conquered Northern Italy, he completed the Pavese and by the second half of the 19th century the Navigli was the main mode of transport in and out of the city. As cars became more prevalent in the 20th century — Fiat began in 1900 in Turin to the west — the Navigli became less important. By the 1960s its commercial function all but ended and it transformed into one of Milan’s top nightlife attractions. The city renovated it for the Milano Expo 2015.

It’s now used primarily for irrigation and only the Grande and Pavese remain for tourist navigation. The Martesana has long since gone dry and the Bereguardo (19 kilometers) and the Paderno (3K) are too short and undeveloped. But along the streets in the neighborhood just off the canal reveals another Milan I’d never seen.

Up Via Scaldasole are fusion restaurants and dimsum bars. I walked past a cute French cafe. I think on this one street I saw more restaurants of foreign cuisine than in all of Rome.

Boutique clothes shops and rare bookstores filled small spaces in the retail area. Plants covered balconies. Birds sang overhead. Church bells pealed at noon. It was a lovely stroll and I could see what Giorgio Armani once said of Milan when he was in the army and a medical school dropout: “Milan is a true metropolis: strong and fearless but welcoming, too. Little by little, I came to realize that I could become someone here.”

In one covered driveway are grainy black and white photos of old Milan pre-Armani. Women in long, elegant dresses and bonnets strolled near the Vittorio Emanuele arch. Horse and buggies shared space with old trams and trolleys circling the Duomo. One shot showed two men with handlebar moustaches taking in the view from atop the Duomo.

Unfortunately, the romance of Milan ended when Benito Mussolini founded the Fascist Party here, hitched his career onto Adolf Hitler’s jackboots and watched as Allied Forces bombed Central Milan back to the Stone Age. Somehow they missed the Duomo and Da Vince’s “Last Supper” in the Convent of Santa Maria delle Grazie just one kilometer north of the Navigli.

Post-war, Milan rebuilt itself. However, the 20th century architecture clashes with the antique charm that attracts millions to the rest of Italy. 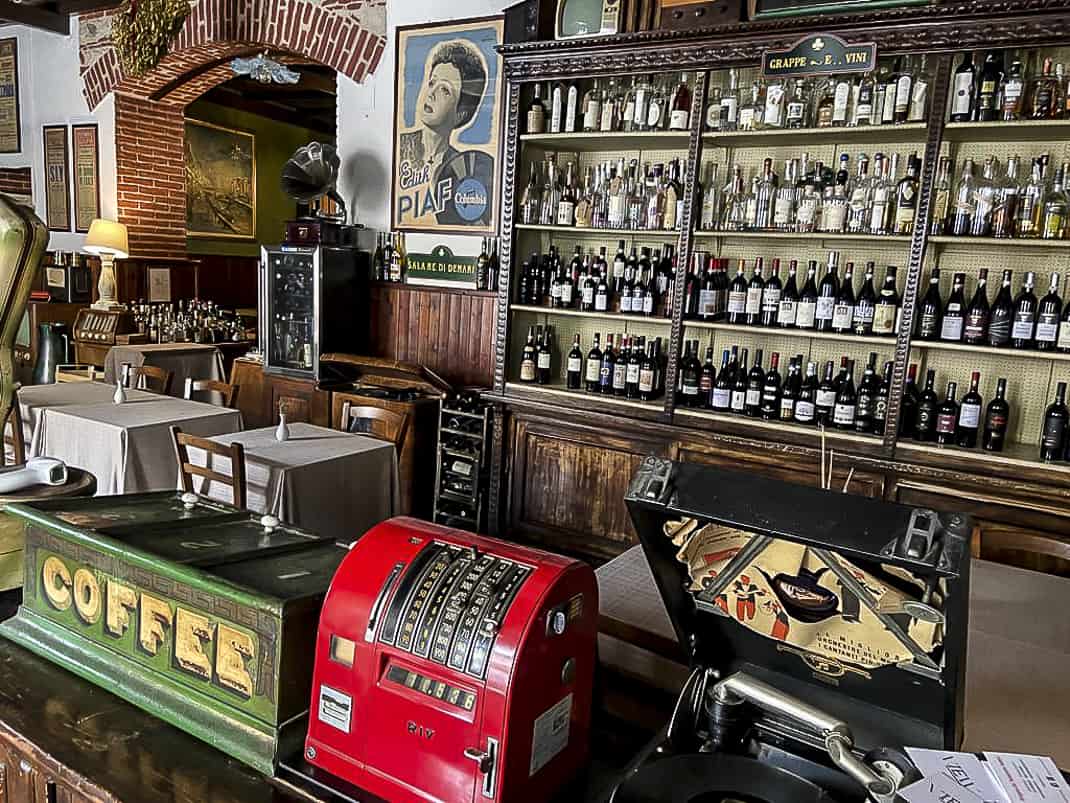 Still, the Navigli remains and it’s a perfect spot for a leisurely lunch. This is where Milan resembles a small town or a quiet piazza in Rome’s Centro Storico. Cars are in the distance as is the noise. The pace is slow. The smiles are nearly as wide as the canal.

I took a wooden table at Asso di Fiori Osteria dei Formaggi where the antique trappings belie its relatively young age. Started in 1984, Asso di Fiori looks like something out of a Fellini film. An old-fashioned register sits next to a hand-painted “COFFEE” sign. Behind the register next to four long shelves of booze bottles is a retro poster of Edith Piaf, the popular French cabaret singer from the ‘40s and ‘50s.

It’s as good as it sounds. I forgive you, Milan. You do know how to cook.

However, only two other tables were occupied. Monica Congia, a third-generation owner who runs it with her husband and brother, told me they just reopened that week. They were lucky. Covid battered Italy’s economic engine.

According to The Associated Press, Lombardy had 300,000 more poor by the end of 2020. Last spring Caritas Ambrosiana, the charity of Milan’s archdiocese, helped 9,000 families, one-third of whom were first-time recipients. During my stroll, I saw quite a few businesses shut for good.

“It is even more widespread than we knew, especially for a rich city like Milan,” Caritas spokesman Francesco Chiavarini told AP. “These precarious jobs were lost.”

Many places I saw on the Navigli were closed, including the boat tours that ply the canals every hour. I wondered if Backdoor 43, billed as the World’s Smallest Bar at 4 square meters, was open on Ripa di Porta Ticinese a short walk off the canal.

However, temperatures are back to the 70s here and I’m hoping Monica’s tables will soon be filled. The tour boats will soon start again. Another steady stream of visitors will stroll down Via dei Lavandai, maybe the prettiest side street in the Navigli. Named for lavare, or “to wash,” it’s where residents used to hang their laundry. Today, a small canal shoots off the Grande and winds its way past a boutique shop, a plant shop and a tea store with takeaway samples.

As I walked back to the Metro, I heard modern music pour out of a bar called Vibes. Rain had yet to fall and the outdoor tables were beginning to fill. Milan is waking up again after a horrible nightmare.

How to get there: Italy has lifted its travel restrictions. Visitors from the U.S. can come to Italy on Covid-free flights with negative tests leaving U.S. and arriving in Italy. Delta announced it will increase its Covid-free flights to Italy in time for summer. American will make more of its routes Covid free as well. That includes Dallas-Rome.

Where to stay: Ramada Plaza Milano, Via Stamira d’Ancona 27, 39-02-288-541, www.ramadaplazamilano.it. I paid 200 euros for two nights at end of April. Big, modern chain that includes a good buffet breakfast. North of the train station, it’s 500 meters from Turro Metro stop and eight Metro stops from the Duomo.