The Torlonia Marbles: Ancient history with a view as Rome museums cautiously open in middle of a pandemic

Italy is crawling with yellow fever.

I am. It’s all over me. From my head to my toes to my senses all the way to my taste buds and brain. But I’m not suffering. No, I am wallowing in bliss.

Going against the grain set by the rest of the European Union, on Feb. 1 Italy lowered its Covid restriction level from orange to yellow. Except for four regions and part of another, the rest of my adopted country opened restaurants and bars for the first time in more than five weeks.

Italian health officials and scientists warned against it. Our curves have dropped since the last lockdown but for most of January they plateaued. They’ve gone up and down. This is what happens in an economically ravaged country when the government collapses. You take risks. So did I.

But what they hell? I wanted a beer.

I went pub hopping that first Monday. I went out to lunch Tuesday and afterward I satisfied the part of my brain that centers on another taste.

Museums here in Rome have been shuttered even longer. Feb. 1 was the first day they’ve been open since October. Greeting this culture-crazed population is an exhibition that hasn’t been seen here, for the most part, in 35 years. Maybe I went through art withdrawal but what I saw drew me to an extraordinary conclusion.

In seven years in Rome, The Torlonia Marbles: Collecting Masterpieces may be the most remarkable exhibition I’ve seen here.

They are 96 marble sculptures ranging from the 5th century B.C. to the 4th century A.D. They are some of the 620 sculptures collected by the Torlonia family from the 15th to 19th century, from the Renaissance to the Neoclassical Period. You get up close and personal with some of the most amazing works of Roman and Greek figures, both mythic and real.

And the best part? The museum had no problem enforcing social distancing. With virtually no tourists in Rome, the museum was practically empty.

The Torlonia Marbles are held in the Capitoline Museums. They are a story in themselves. They sit atop a long staircase rising to Campidoglio on Capitoline Hill, one of the famed Seven Hills of Rome and where the city was founded in 753 B.C. The Roman Empire’s two most important temples once stood here: Juno Moneta (which housed Rome’s mint) and Jupiter Capitolinus (a descendent of Jupiter, Ancient Rome’s Zeus). In modern times it has housed Rome’s city hall and some of the most famous weddings in Rome’s modern history.

If there is one place to start your tour of Rome, this may be it. Climb the stairs to the massive piazza anchored by the huge statue of Marcus Aurelius (161-180 AD), arguably Rome’s greatest emperor. I’ve been here dozens of times but never in the middle of a global pandemic. I walked past the Palazzo Nuovo and Palazzo dei Consrvatori, which house the Capitoline Museums and flank the piazza.

Behind the piazza I looked down at the Roman Forum, the center of Roman life for nearly 1,000 years and one of THE must sees in the city. It was empty. Not a soul roamed under the Arch of Settimio Severio or posed next to the seven majestic Corinthian columns of the Temple of Saturn. It looked like the Sack of Rome happened over the weekend and not the 5th century A.D.

Yet the Forum was beautiful in its solitude. It’s like the world let the most powerful empire in human history, long since dead, finally rest in peace. Yes, global pandemics do have their positive sides. Experiencing one of the most touristy sites in the world by yourself is one of them.

I met my friends, Tom Leitner and Ilaria Capobianco, his wife, at the ticket window where we paid only 11 euros plus 5 more for a year’s worth of admission to the City of Rome’s museums. We went around the corner and up some stairs.

“There’s a cool cafe here that no one knows about,” said Tom whose wife worked for the city and was a frequent patron.

We were the only ones in Terrazza Caffarelli where we took espressos and walked outside to a massive courtyard with a spectacular view of the city below. The view, mild 60-degree weather and comfy seating, had a bottle of wine written all over it.

Making a mental note for later, we descended the stairs and went around the corner to the Palazzo Caffarelli where this collection found its long-awaited home. The Torlonia family handled banking for the Vatican in the 18th century. They used art as a symbol of prestige and tried to inspire other businessmen to collect ancient art, not so much as an investment but as a representative of social class and education.

They acquired their first sculptures in the early 19th century at a public auction of 18th century restorer and sculptor Bartolomeo Cavaceppi and used them to decorate their family villa. In 1825 they added to their collection from Marquis Vincenzo Giusiniani, a patron of Caravaggio, Italy’s greatest Baroque artist and the closest thing I have to a hero in the arts. In 1866 they bought the collection from Villa Albani in north Rome.

In 1875, the Torlonias placed the collection in an old grain warehouse on Via della Lungara near Palazzo Corsini, a beautiful palm tree-laden Baroque palace near the west bank of the Tiber River. However, in 1976 the warehouse converted into housing units and the sculptures went behind lock and key.

There it remained as everyone squabbled over how to show the exhibit and if pieces should be sold to other museums. In 2014 Prince Alessandro Torlonia created a foundation to promote the art and two years later signed with Italy’s culture minister, Dario Franceschini, to display some of it.

Finally, on Oct. 14, it opened to the public again but on Nov. 6 all museums closed as part of the Covid lockdown. Then three months passed, prime minister Giuseppe Conte quit, the government collapsed and the country opened up as the Italian public health world gasped.

That’s why last week I found myself standing next to a 2,000-year-old vase the size of a small pool and a sculpture of Marcus Aurelius so real he seemed to stare back at me.

The museum’s first room has 20 remarkably detailed busts including Hadrian (130 AD), the powerful emperor (117-138 A.D.) who built the colossal Castel Sant’Angelo along the Tiber, and Caracalla (198-217 A.D.) whose baths can still be toured today.

In the middle of the room is a life-size bronze statue of the general, Germanicus, the adopted son of Emperor Tiberius and who defeated the Germanic tribes in 14-16 A.D.

The busts are spectacular in their detail. The hair is curly. Some pupils seem focused. Many underwent restoration that cleaned off the dirt from centuries in a warehouse rather than repair structural damage. But almost as astonishing as the skill the sculptures showed is this little fact:

No one knows who did them.

The artists remain a mystery. They were discovered during excavations. They have no names inscribed. It’s as if the Ancient Greeks and Romans just sat around and did masterpiece sculptures in their spare time. Sure, that’s like your local insurance agent getting off a shift and painting a church ceiling.

In the next room stood a huge sarcophagus with a lid and decorated with the 12 Labors of Hercules. According to legend, Hercules had to perform 12 tasks in order for Jupiter to bring him up to Olympus for immortality. In intricate detail, it shows him killing a lion, his victory over the hydra, a fight with a wild boar, his capture of the giant mythical deer called Hind of Ceryneia and the scattering of the man-eating Stymphalian birds, among other feats. If you’re into Greek mythology, Olympus and, especially, the legend of Hercules, this is the one piece of art in the world to see.

The  next room held only a vase. But this vase is massive and filled nearly the entire room. Short and wide with about a 20-foot circumference. The Tazza con Fatiche di Ercole is Italian for the Cup of Hercules’ Labors. It shows the Greek hero battering the hydra with a club and taming the deer along with his other challenges displayed all the way around the cup.

One of the collection’s most prized pieces is a strange sculpture of a man holding on to the bottom of a giant ram. It’s Ulysses. In Greek mythology, Ulysses escaped the cave of the deadly cyclops by hiding under a ram, as he’s quoted in “The Odyssey” in 8th century B.C., “Thus every three sheep bore a man. But as for me — there was a ram, far the best of all the flock; him I grasped by the back, and curled beneath his shaggy belly, lay there face upwards with steadfast heart, clinging fast with my hands to his wondrous fleece.”

Then came another room of busts of famed Roman politicians ranging from Julius Caesar (1st century BC) to Claudius (2nd century AD). The sculpture of emperor Claudius, 41-54 A.D., looks like a photograph come to life. The lines in his forehead, his wavy hair, the high cheekbones, whoever did these pieces missed the fame he surely deserved.

One of Rome’s most famous sculptors, Gian Lorenzo Bernini (1598-1680), even has a piece here. The Statue of the Resting Goat is believed to be part of a wealthy Roman residence and was eventually placed in the Gallery of Palazzo Giustiniani. Bernini, fascinated by Roman and Greek statues, became a frequent visitor to the gallery and restored many of Giustiniani’s sculptures. The body is original but the head, complete with the scruffy beard and menacing horns, is all Bernini.

On the way out, we walked past a brick walkway that was once a temple’s ground floor dating back to the 6th century B.C., maybe the oldest thing I’ve seen in Rome. We made our way back to the terrace bar where we sat on lush couches, ordered a bottle of Valpolicella from Veneto and stared out at the magnificent view beyond. In the distance stood the three tallest domes in Rome: San Carlo ai Catanari, St. Peter’s and Sant’Andrea della Valle. The sun was setting, St. Peter’s gold cupola began lighting up the painted sky and we all toasted to art and Rome, good wine and good friends.

And to the end of the pandemic. Rome is too beautiful to hide from the world. 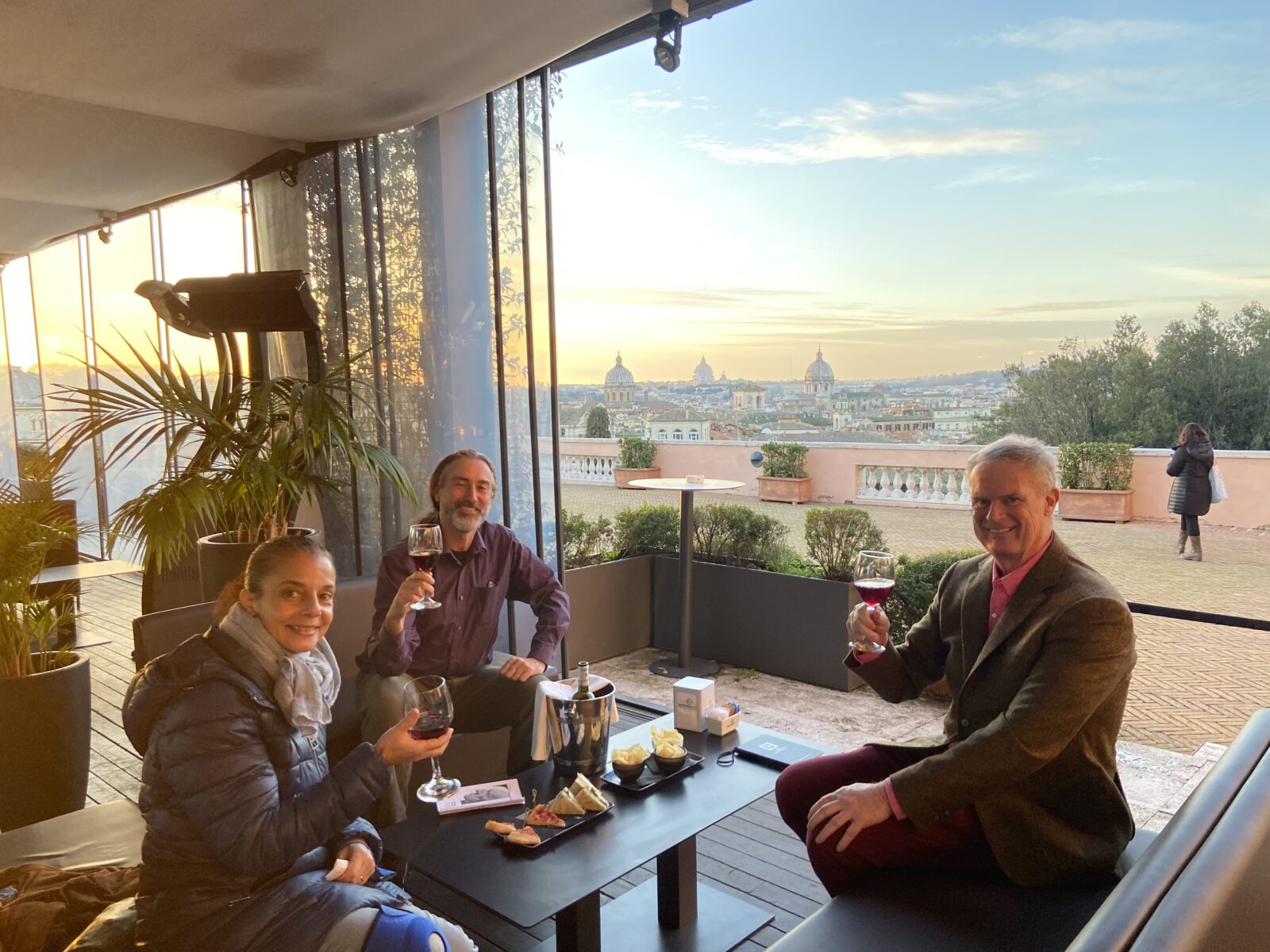