One of the great things about living in Italy is I have never met a single person who thinks a racist, fascist, sexist, lying, corrupt, self-centered, womanizing, billionaire businessman with bad hair should lead the free world. Italians should know.

They had one lead their country.

Silvio Berlusconi was Italy’s prime minister three times for nine years, from 1994-95, 2001-06 and 2008-11. He had all the trappings of Donald Trump before he took office — and proceeded to run the entire Italian peninsula into the Mediterranean. I wanted to write this as a warning to all the racist, fascist, sexist, uneducated, angry white men who will vote for Trump what could lay ahead.

However, I thought Berlusconi was too easy. I wanted someone from Italy’s past with more cache, more sauce. Mussolini came to mind. Nope. When he was younger, Mussolini was a communist. Trump only sleeps with communists. Caligula, Ancient Rome’s randy emperor in the 1st century A.D., had the same locomotive libido as Trump. But Caligula grew up with a military family. Trump grew up with a silver spoon.

Berlusconi is too good a fit, like Trump in jackboots. I can’t ignore the obvious. Italians make it all the time. They frequently ask me, “What do you think of Trump?” Answering helped me learn a new Italian word: fumetto. That’s Italian for “comic strip.” I ask them what they think of him, and they immediately say one word.

The comparison has reached the mainstream media. Sure, the more zealot Democrats compare Trump to Hitler. Like them, I also felt Trump’s convention speech would’ve been better in its original German. However, Hitler built bunkers. Trump built buildings. The closest place Trump has come to a battlefield is divorce court.


My good friend, Eric J. Lyman, is one of the top freelance journalists in Rome and recently wrote a brilliant article in USA Today talking to learned Italians who drew parallels between Berlusconi and Trump. Lyman (@ericjlyman) is a good source himself. He arrived in Rome in 1999 only seven months after Berlusconi’s second and longest stint in office and has covered Italian politics for USA Today since 2001. The comparisons are easy — and frightening.

How do they compare? In many ways, from their overworked genitalia to their underworked brains.

Both built billion-dollar business empires. Berlusconi, the son of a banker and housewife, graduated from law school and went into the construction business. He used the profits from building Milano Due with its 4,000 residential units to start his own ad agency. He parlayed that into Italy’s first and only commercial TV empire. He soon owned a private jet. In 1999, the year he became prime minister, he was listed as the 34th richest man in the world with a net worth of $8 billion. He was 62. According to Forbes, his homes have been valued at $50 million.

Trump, the son of a real estate and construction mogul, took over his dad’s business in 1973. In 1981 he renovated a Manhattan building into the Trump Plaza and went on to build the Trump Taj Mahal Casino, Trump World Tower and Trump International Hotel and Tower among many others. Last year Forbes listed his net worth at $4.5 billion although Trump maintains it’s north of $10 billion, just short of the size of his ego.

Both used right-wing aggression to appeal to the common man. By the 1990s, Italians were tired of the ruling centrist Christian Democracy party which had ruled Italy for 40 years. Billed the balena bianca (white whale), it suffered through numerous fraud scandals in the 1960s and was more closely associated with the Mafia than any other party. Berlusconi entered the political scene after the DC dissolved in 1994 and the Communist Party appeared headed to victory. Berlusconi formed his own right-wing party, Forza Italia, and swept into Italian homes using all the TV networks he owned on his Mediaset communications conglomerate.

“People really believed in Berlusconi,” Lyman said. “In the early days, people would say about him, ‘Oh, if he can do to Italy when he did to Mediaset, we’ll all be in better shape.’ Many people in the U.S., say the same thing.”

Like Berlusconi, Trump went right into people’s homes with his reality TV shows and his charismatic screen presence. He brags about the businesses he built and the wall he will build. He trumpets a business acumen that will fix the huge deficit. However, Christian Democracy politicians’ steady parade into court to face corruption charges showed Berlusconi came at the right time.

Looking at the United States’ lower crime rate, lower unemployment rate, improved economy, the end of the Iraqi War, the death of Osama Bin Laden and the stronger dollar overseas, everyone but uneducated white males thinks Trump is, basically, full of shit.

Trump married Czech model Ivana Zelnickova in 1977 and divorced in 1991 after his affair with Marla Maples, a former high school homecoming queen in rural Georgia. They married in 1993 and divorced in 1999. In 2005 he married Slovenian model Melania Knauss whose marriage jump started her struggling career. After her convention speech plagiarized some of Michelle Obama’s speech from 2008 and her website listed lies about the degree she acquired, the site has been erased and she has been labeled as perhaps America’s biggest dingbat.

Both have had their other head get them in major trouble. Lario filed for divorce from Berlusconi claiming she “cannot remain with a man who consults with minors.” That same year in 2010, a teenage Moroccan belly dancer named Karima El Mahroug (aka Ruby Rubacuore “Ruby Heartbreaker”) told investigators that Berlusconi paid her $10,000 to attend parties in his private villa, parties that she referred to as “orgies.” She said Berlusconi joined 20 women to perform an African-style ritual called “bunga bunga” in the nude. “Bunga bunga” has forever more been the description of a “sex party with a powerful leader.” He reportedly paid El Mahroug $4.5 million for her services. In June 2013 Berlusconi was found guilty of paying for sex with underaged prostitutes and banned from public office for life and sentenced to seven years in prison. He appealed and the conviction was overturned in July 2014.

In 1997, Jill Harth Houraney filed a $125 million lawsuit against Trump. claiming he displayed hostile and offensive sexual behavior from 1992-97 while she worked with him as a beauty pageant producer. The charges including groping, trying to force her into his daughter’s bedroom and repeated propositions for sex. She withdrew the suit a month after filing, at about the time Trump settled an undisclosed suit with her husband’s company, The American Dream Enterprises.

Both have said things in public most politicians wouldn’t write in a diary.

“An Aids patient asks his doctor whether the sand treatment prescribed him will do any good. ‘No,’ the doctor replies, ‘but you will get accustomed to living under the earth.’”

On Twitter during the Orlando shooting massacre: “Appreciate the congrats for being right on radical Islamic terrorism, I don’t want congrats, I want toughness & vigilance. We must be smart!”

“Arianna Huffington is unattractive, both inside and out. I fully understood why her former husband left her for a man. He made a good decision.”

“My IQ is one of the highest — and you all know it. Please don’t feel stupid or insecure. It’s not your fault.”

Both have been pro sports owners. Berlusconi has owned the Italian soccer power, A.C. Milan, since 1986 and under him it has won eight national Serie A titles, five European Champions League cups, six Super Cups Italia and one Italian Cup. They have won nothing since 2011.

Trump was the first owner of the New York Generals in the fledgling USFL in 1983, sold them quickly to concentrate on building casinos then bought them back in 1984 hoping for a merger with the NFL. The Generals went 14-4 in ‘84 and 11-7 in ‘85, losing in the first round of the playoffs both years. The league folded in 1986. 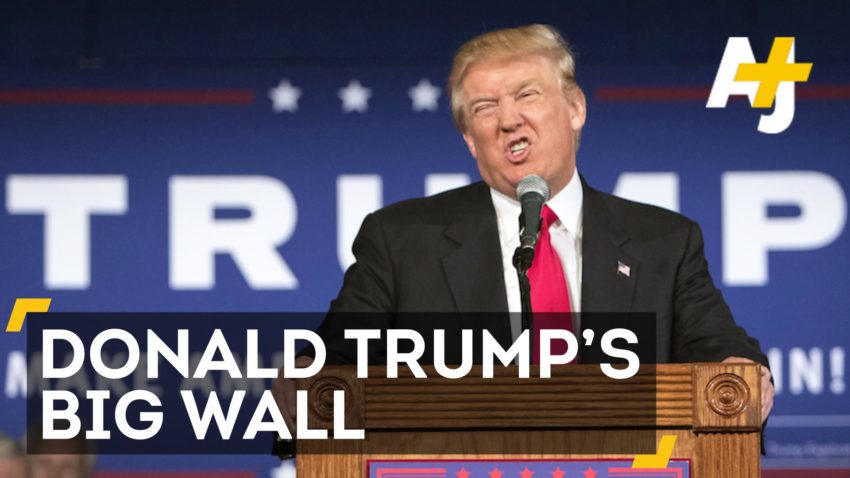 Both are highly anti-immigration. In 2002, Berlusconi combated the high number of immigrants coming to Italy from North Africa by implementing the Bossi-Fini law, named for two right-wing parties under his coalition. The law requires any illegal immigrant without proof of a job or residency to be expelled from the country.

Trump has said he will build a wall to keep Mexicans out and will prevent Muslims from entering the country. He opposes the DREAM Act, which would provide tuition benefits to illegal immigrants at public universities and granting citizenship to any children of illegal aliens both in the U.S.

However, all large-breasted models from the former Eastern bloc are welcome.

Both have charmed their way into their countries’ hearts. Berlusconi came across, Lyman said, “as a non politician.” He used the tentacles on his media octopus to project his image into every household and his hands-on ownership with A.C. Milan brought him popularity in the working class with one of the world’s most popular teams. In the 1990s, there was a surge of babies named Silvio. Lyman interviewed Berlusconi twice.

“He’s so magnetic,” Lyman said. “When I talked to him, I wanted him to like me back. I was really impressed by him. Trump will be the same way. Some leaders have that way about them.”

Trump also used TV to project charisma that oozed through the screen. In 2003 he became executive producer of the reality TV show, “The Apprentice” which he held until 2015 when he quit to concentrate on his presidential candidacy. During the 12 years as producer he earned more than $213 million.

His speeches along the campaign trail, attacking ethnic groups and Clinton with equal savageness, have energized the masses, particularly white men with no college degree. The New York Times reported he has about 80 percent of their vote. The media has been criticized for giving this man such a large forum but he is the MMA of American politics.

What he does is so awful, you can’t look away.

Italy is a third world country economically. According to The Economist, Italy ended the decade of 2010 ahead of only Zimbabwe and Haiti in GDP growth. Public debt was 120 percent of the GDP, third highest in the world and unemployment among young people was at 25 percent. While productivity rose 20 percent in the U.S. during that decade, it dropped 5 percent in Italy. It stood 80th in the World Bank’s “Doing Business” index, below Belarus and Mongolia.

“There were two factors,” Lyman said. “One is a lot of it was going to happen anyway. Italy remained competitive for a long time by devaluing the lire and when the euro came in (in 2002) they couldn’t do that anymore. The economy isn’t particularly competitive. Its tax rate is really high which hurts companies and so on. None of that was Berlusconi’s fault.

“But at the same time he didn’t confront these problems. He would do economic things so he could undercut rivals or so Mediaset would make more money or the statute of limitations on his abuses would run out. A lot of the energy he could’ve been using to fix some of these problems he didn’t.”

Whether this is where the U.S. is headed under a Trump presidency may be known if the Republican Party’s Machiavellian campaign machines cut down Clinton as Trump has so many other women in his past. It’s frightening and I have had some sleepless nights watching the polls bounce back and forth, even while sitting here in Rome 5,000 miles away.

I have faith that enough educated and right-minded people will put down the loud, functionally illiterate minority to which he pans. However, one quote I read scares me to death. It came from an Italian journalist named Annalisa Minella writing in Quartz, the international economic website. She wrote of Berlusconi: “Many people didn’t take him or what he said seriously. Then one day we woke up to find our government overrun by criminals, our economy destroyed and our cultural mores perverted to the extent that the objectification of women was commonplace.

“There was no more laughing to do.”